Submitted Successfully!
Thank you for your contribution! You can also upload a video entry related to this topic through the link below:
https://encyclopedia.pub/user/video_add?id=5832
Check Note
2000/2000
Epileptic seizures and deep learning
Edit
Upload a video

Chronic diseases are growing exponentially. Today, there are over 900 million individuals suffering with some chronic diseases around the world. For this reason, e-health systems are being developed to design a better quality of life for patients. For instance, we have systems for detection of epilepsy, monitoring of vital signs, control of diabetes, among others. Deep learning has being an important technique embedded in these systems to predict and sort the data without the need of a 24-hour monitoring specialist. However, by combining e-health systems and deep learning techniques also brings several challenges that need to be overcome.

Epilepsy is one of the most common neurological diseases in the world, with approximately 50 million people around the world. This disease is a chronic brain disorder that affects people of all ages[1] and also influences the people's quality of life, because they need to live with the possibility of a seizure occurring at any time. The World Health Organization (WHO) recognizes that epilepsy is a public health concern and encourages projects aimed at reducing the impact of the disorder[2].

A system for automatic crisis detection can help people quality of life. If the system can safely predict periods that are more likely to occur seizures, it would be possible to develop some mechanisms to warn patients and then they can avoid dangerous activities[3].

In recent years, the brain-computer interface (BCI) has been developed to allow the acquisition of the patient's brain data using electrodes on the scalp, capturing spontaneous electrical activities of the brain based on electroencephalograms (EEG)[4], making it a standard technique for monitoring brain activity.

A specialized physician is usually used to analyze the data and predict possible seizures. One method that is currently being found in the projects is deep learning (DL). The DL is a robust solution that uses algorithms to find patterns in complex data, and has its consolidation in the field of computer vision and speech recognition[5].

For the development of a system for epileptic seizures detection, there are several challenges. The first one is the EEG data; it is a non-stationary signal, so normal patterns and seizures may change from patient to patient[3]. The volume of data generated by an EEG is also other challenge due to complexity to handle it; on the one hand, due to the high-resolution space-time, it helps for prediction. Due to the big data, one needs a secure location to store the patient data continuously[3]. As a consequence, the network bandwidth for sending data is also a challenge[6], but both, network and data storage, can be covered by a cloud based solution. Last, the application for real-time epileptic crisis detection requires a rapid diagnosis to prevent the patient from performing dangerous activities[4].

Several papers have proposed systems for detecting epileptic seizures [3] [4] [6], however none of them have used fog and cloud computing to improve the availability or performance. In [3], only cloud computing was used. In \cite{hosseini2017optimized}, the authors used only IoT in their system. Finally, in [4], the system proposed works with cloud and edge computing, which although it is similar to fog, but has different concepts based on NIST definition.

We propose an e-health system for predicting epileptic seizures with real-time analysis, using the advantages of cloud and fog computing, as shown in Figure 1. We use the cloud due its large storage and processing capacities. We store data from existing generic databases and also new data collected from individual patients, and train the DL model at cloud, since it requires high computation. 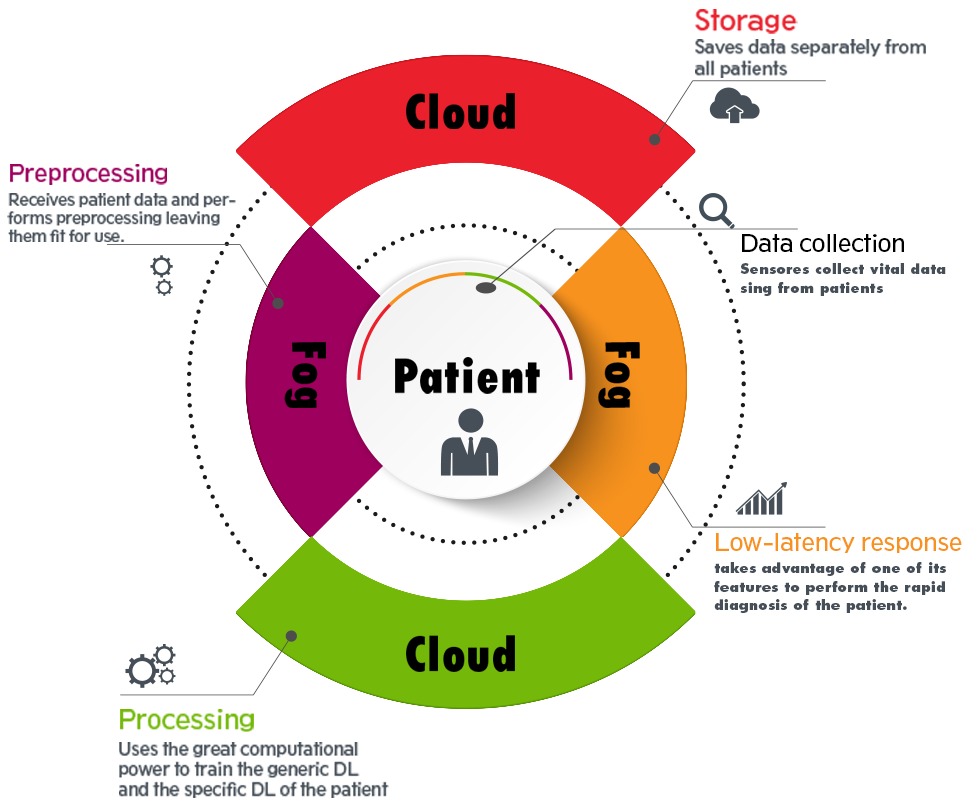 In the data collection layer, we have the sensors that are in direct contact with the patient, collecting their vital signs, such as spontaneous electrical activities of the brain, heart rate and movement. Once collected, the data is sent to the fog computing layer.

The fog computing layer is responsible for diagnosing and alerting the patient or his/her family. It receives the patient's data, performs the pre-processing of the data, executes the DL model for classification and, if necessary, generates an alert. The fog layer is also responsible for sending the pre-processed data and its classification results to the cloud computing layer. The fog computing layer is deployed close to the client, so we can avoid issues with network bandwidth and achieve response with low latency.

The cloud computing layer performs the DL training, patient data storage and long-term monitoring. The DL training process is performed by the cloud, because it requires high computation, so one can take advantages of the cloud, such as its high processing capacity and high availability. Initially, the DL model is trained with existent generic data. Additionally, we can generate a specific DL for each patient, feeding the DL model with data from the monitored patient.

Our proposed e-health system is able to generalize the DL model in order to achieve satisfactory predictions in new patients. Considering that the EEG does not have a defined standard for all patients, it is important that DL models learn and become a specialist in that patient by decreasing the false positives. This goal is accomplished through the data stored in the cloud and its continuous monitoring. As any research proposal, this system development faces several challenges.

The entire article has been published on: https://ieeexplore.ieee.org/abstract/document/8605748

More
©Text is available under the terms and conditions of the Creative Commons-Attribution ShareAlike (CC BY-SA) license; additional terms may apply. By using this site, you agree to the Terms and Conditions and Privacy Policy.
Upload a video for this entry
Information
Subjects: Computer Science, Information Systems
Contributor MDPI registered users' name will be linked to their SciProfiles pages. To register with us, please refer to https://encyclopedia.pub/register :
Patricia Takako Endo
View Times: 110
Revisions: 2 times (View History)
Update Time: 19 Feb 2021
Table of Contents
1000/1000
Hot Most Recent