Submitted Successfully!
Thank you for your contribution! You can also upload a video entry related to this topic through the link below:
https://encyclopedia.pub/user/video_add?id=539
Check Note
2000/2000
MiRNAs in Pregnant Corpus Luteum
Edit
Upload a video
This entry is adapted from 10.3390/ijms21062229

Recent scientific developments in understanding the lifespan of the corpus luteum provided new insights into dynamic molecular changes occurring during transition of this fascinating endocrine gland into the organ supporting pregnancy. Processes such as oocyte-sperm interaction, preparation of the uterus for implantation, blastocyst attachment, and successful gestation are mainly driven by progesterone, a steroid hormone produced by the corpus luteum. Inadequate production of progesterone has been described in several mammals, including humans, as luteal phase deficiency, a condition in which endogenous progesterone is insufficient to support pregnancy. Thus, it is essential to extend knowledge about the molecular mechanisms controlling the function of the corpus luteum. Unfortunately, still there is a lack of data explaining the regulation of core molecules responsible for the maintenance of luteal function. Recent studies shed a new light on the molecular mechanisms supporting luteal function, involving microRNAs.

The fundamental role of miRNAs in ovarian function was proved by knockout of DICER, which inhibited follicle growth, reduced the ovulation rate and led to faulty oocyte development [[1][2][3]]. Further studies showed a number of differentially expressed miRNAs in the bovine and ovine corpus luteum (CL) during development, regression, or its rescue during pregnancy [[4][5][6][7][8][9]]. Interestingly, a greater amount of miRNAs was found in the mature than in the developing CL, indicating their potential role in the maintenance of luteal function. Nevertheless, not many studies have provided information on the roles of specific miRNA–mRNA interactions on the function of luteal cells, while only a few have shown changes in the expression of miRNAs occurring in the CL during early pregnancy [[10][7]].

Recently, 14 differentially expressed miRNAs were identified in porcine CL collected right after maternal recognition of pregnancy (day 14 of pregnancy) and luteolysis (day 14 of the estrous cycle) [[10]]. Overall, seven miRNAs were upregulated (e.g., miR-21a-3p, miR-345-3p, miR-371-5p), and seven miRNAs were downregulated (e.g., miR-181a, miR-532-3p, miR-99b) in the porcine CL on day 14 of the estrous cycle compared to the corresponding day of pregnancy. Interestingly, among miRNA targets upregulated during pregnancy, genes encoding known regulators of luteolysis were found (e.g., EDN1, FOS, JUN, PTGS2, ESR2) [[11][12][13][14]], while miRNAs elevated in the CL during luteolysis could target genes associated with luteal function maintenance (e.g., PGR, VEGFR1, CREB, PTGER2). Further in silico analysis suggested that miRNAs highly expressed in the CL during early pregnancy can be involved in the cell cycle, cell death and survival, cellular development, growth, and proliferation—events characterizing the time when a decision is made either to regress or maintain the luteal function. Notably, the expression of miRNAs was examined in the whole luteal tissue. Therefore, the aforementioned biological processes can be potentially regulated by differentially expressed miRNAs in various cells forming the porcine CL, such as the endothelial cells, immune cells, or fibroblasts, and not only the luteal cells. Other studies performed on the bovine CL identified 15 miRNAs differentially expressed on day 18 of pregnancy vs. the corresponding day of the estrous cycle, while among predicted targets of these miRNAs, genes involved in immune-related events and apoptosis were found [[7]].

Previously, the high expression of two clusters, miR-183-96-182 and miR-212-132, was noticed in the luteal vs. follicular tissue of cows, while miR-96 was found to be an important regulator of steroidogenesis and cell survival [[9]]. In pigs, miRNAs upregulated in the CL of pregnant animals belong to three independent clusters: miR-99b, miR-532, and miR-181a [[10]]. Again, among targets of miRNAs occurring in the same cluster (i.e., miR-532 and miR-99b), crucial regulators of luteolysis were found, including, for example, EDN1, FOS, JUN, NR4A1, OXTR, and PTGS2 [[11][12][13][14]]. Interestingly, identified clusters are conserved or broadly conserved among different animal species and humans; thus, it is possible that some of them can support luteal function in other species as well, especially since miRNAs belonging to cluster miR-99b were previously detected among mostly abundant miRNAs in the mature bovine CL [[8]]. 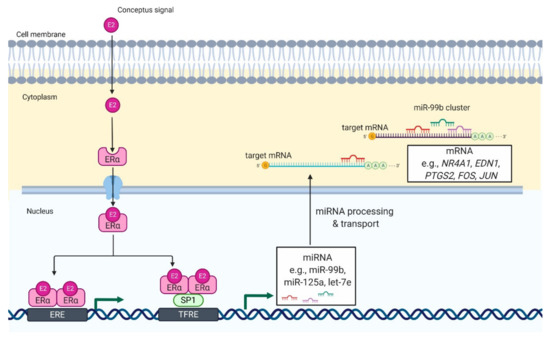 Figure 1. Proposed model of E2-mediated regulation of miRNA expression in luteal tissue during early pregnancy in pigs. E2 enters the luteal cell and binds with its genomic receptor, ERα, located in the cytoplasm. It leads to formation of ERα homodimers and their translocation to the nucleus. In the nucleus, ERα homodimers bind to (1) an estrogen-responsive element (ERE) or (2) transcription factor SP1, which binds to transcriptional factor responsive elements (TFRE) in the promoter region of miR-99b cluster. As a result, there is an increase in the expression of miRNAs belonging to miR-99b cluster (miR-99b, miR-125a, and let-7e), which can target mRNA involved in luteolysis including NR4A1, nuclear receptor subfamily 4 group A member 1; EDN1, endothelin 1; FOS, fos proto-oncogene; JUN, jun proto-oncogene. That mechanisms support the function of luteal cells and allow continuation of progesterone production required for pregnancy establishment and maintenance.

More
© Text is available under the terms and conditions of the Creative Commons Attribution (CC BY) license; additional terms may apply. By using this site, you agree to the Terms and Conditions and Privacy Policy.
Upload a video for this entry
Information
Subjects: Biochemistry & Molecular Biology
Contributor MDPI registered users' name will be linked to their SciProfiles pages. To register with us, please refer to https://encyclopedia.pub/register :
Monika M Kaczmarek
View Times: 209
Revisions: 4 times (View History)
Update Time: 29 Oct 2020
Table of Contents
1000/1000
Hot Most Recent