+1 point
Thank you for your contribution! You can also upload a video entry related to this topic through the link below: https://encyclopedia.pub/user/video_add?id=37909
Check Note
2000/2000
Dermo-Cosmetic Benefits of Marine Macroalgae-Derived Phenolic Compounds

Marine macroalgae have an interesting profile of bioactive compounds and have gained tremendous attention in cosmeceuticals with negligible toxicity effects (cytotoxicity, reproductive toxicity, genotoxicity, mutagenicity, carcinogenicity, etc.) on humans and exhibit strong benefits for the skin. Among the diversified compounds, phenolic compounds are the group of phytochemicals found in high amounts with great structural diversity. Phlorotannin is the most studied polyphenol compound in brown algae, but besides there are some other phenolic compounds observed and studied in macroalgae such as terpenoids, bromophenols, mycosporine amino acids (MAAs), and flavonoids. These compounds are already characterized and studied for their full range of cosmeceutical benefits such as skin whitening, moisturizing, photoprotection, antiaging, antiwrinkle, anti-melanogenic, and antioxidant activities as well as in the treatment of pruritus (caused by acne, eczema, dermatitis, hives, psoriasis), photoaging, and skin pigmentation disorders (hypopigmentation due to the absence of melanocytes and hyperpigmentation caused by skin irritation or metabolic disorders).

Cosmeceutical ingredients are active compounds that are used to improve the appearance of the human body and represent a new category of preparations placed between cosmetics and pharmaceuticals. Cosmeceutical formulations intend the improvements of skin health and beauty [1][2][3]. Globally, the cosmeceutical sector is growing each year due to increasing modern beauty trends. To meet consumer demand, industries are moving towards the excessive use of synthetic cosmetic ingredients in formulations listed as Hydroquinone (HQ), Phthalates, Para-aminobenzoic acid (PABA), Benzophenones, Butylated Hydroxyanisole (BHA), Butylated Hydroxytoluene (BHT), and Dibenzoylmethane (DBM). According to SCCS (Scientific Committee on Consumer Safety) opinion (SCCS/1564/15), the excessive use of synthetic ingredients in cosmeceutical formulations may lead to different types of toxicities such as acute toxicity, corrosion and irritation, skin sensation, dermal/percutaneous absorption, repeated dose toxicity, reproductive toxicity, mutagenicity/genotoxicity, carcinogenicity, and photoinduced toxicity on the skin as well as human health. Hydroxyanisole, widely used in skin-whitening creams, has reported many harmful effects such as ochronosis and potential mutagenicity [4][5][6]. Benzophenones, DBM, and PABA have shown allergic phototoxicities, dermatitis, and skin irritations [7][8]. Besides, BHA and BHT are applied in moisturization and lipstick preparations that cause allergic reactions, irritation, and corrosivity in the skin. Another ingredient, parabens, are highly carcinogenic and neurotoxic among other harmful health effects. Around 75 to 90 percent of commercially available products contain parabens, which are mostly used as a mixture in cosmetic formulations. Parabens have been reported to have a high risk of breast cancer and the development of malignant melanoma in women [9]. However, in the ACDS Contact Allergen Management Program (CAMP) report, about 19% of products contained different types of parabens, mainly methylparaben, ethylparaben, propylparaben, and butylparaben. According to them, these components have little allergenicity compared to other preservatives, with no adverse reactions, and low toxicity, safety, and cost [10].
Various natural resources can be used in skin cosmetic products such as terrestrial plants, fungi, marine algae, bacteria, animals, etc. [11][12][13][14][15]. Among them, marine macroalgae are widely utilized for their skin benefits nowadays. Marine macroalgae are also known as seaweed: eukaryotic, aquatic photosynthetic macroscopic, multicellular organisms that are ubiquitously found along the seacoast and in seawater. They belong to the Eukaryota domain and are classified into three major taxonomic groups, red algae, brown algae, and green algae, belonging to the Rhodophyta phylum, Ochrophyta phylum, and Chlorophyta phylum, respectively [16][17][18][19]. These different types of marine macroalgae are illustrated in Figure 1. There is an increasing demand for bioactive constituents in cosmetic and cosmeceutical applications from macroalgae. The applications of macroalgae-derived compounds to the cosmetic industry are based on their potential biological activities [20][21][22]. These are lipids, fatty acids, polysaccharides, vitamins, minerals, amino acids, phenolic compounds, proteins, pigments, etc., which have attracted attention for their skin cosmeceutical benefits [23][24][25]. 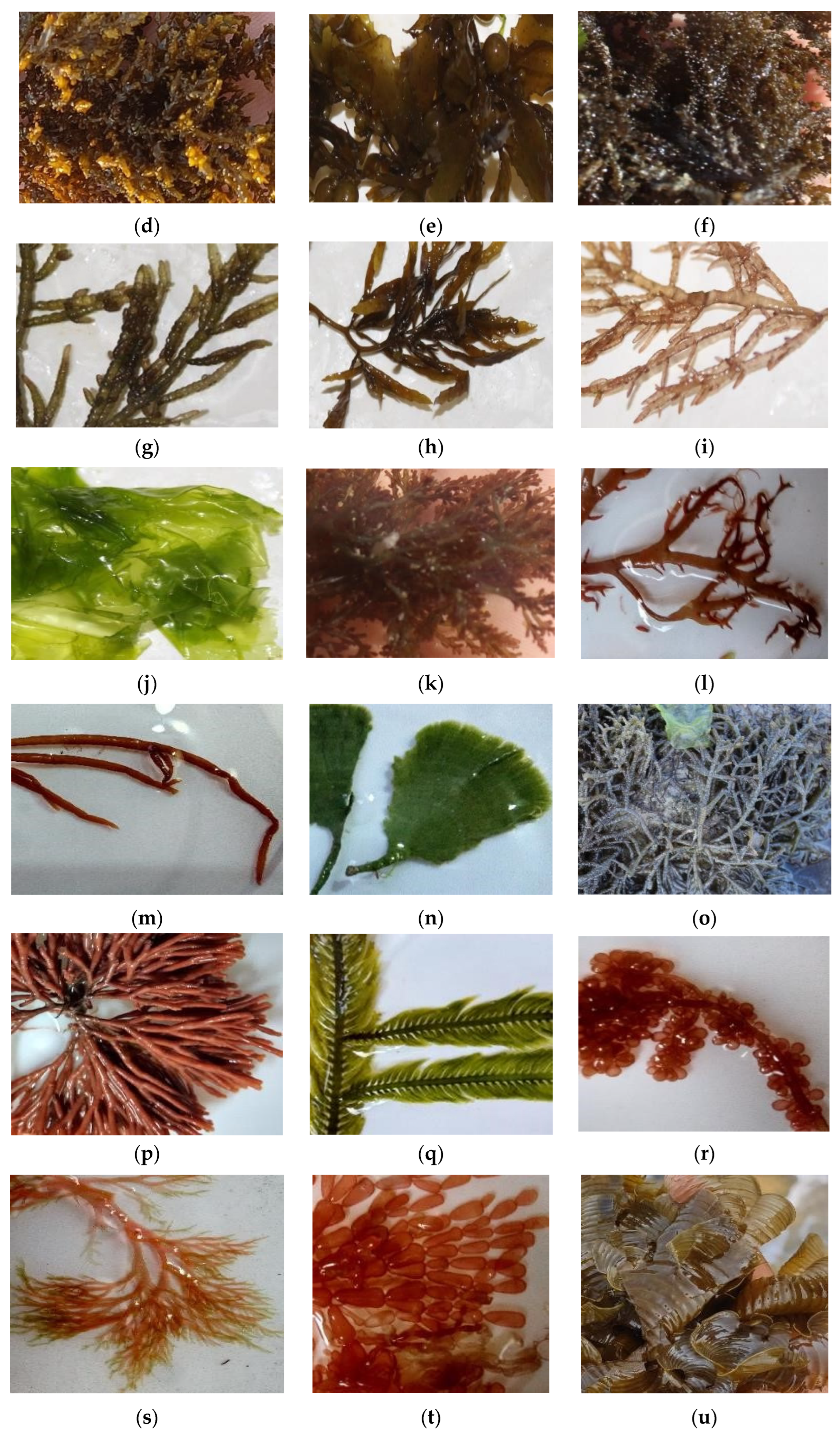 2. Characterization and Types of Phenolic Compounds

Polyphenol is mainly of two types, phlorotannin, and phloroglucinol. The former is a polymer of phloroglucinol with an additional halogen or hydroxyl group whereas the latter contains an aromatic ring structure with three hydroxyl groups [44][45][46]. These can be subclassified into six different groups: (i) Eckols; (ii) Fucophlorethols; (iii) Fucols; (iv) Phlorethols; (v) Carmalols; and (vi) Fuhalols.

Lignans are a type of phenolic compound, a dimer or oligomer, formed due to the union of monolignols, coniferyl alcohol, and sinapyl alcohol. Freile-Pelegrín and Robledo [47] reported the presence of lignans in calcified red marine algae Calliarthron cheilosporioides (Rhodophyta). Another polymeric phenol, lignin, is the most abundant organic polymer found in nature but not extensively studied in marine algae, which are structurally composed of monolignols (coniferyl alcohol, sinapyl alcohol), and lignan units randomly linked forming a polymeric network. Tannins are usually divided into three different chemical structures: hydrolyzable tannins, flavonoid-based tannins, and phlorotannins. The first one is derived from simple phenolic acids and their carbohydrate hydroxyl groups that are partially or completely esterified with phenolic groups. The second, flavonoid-based tannins, synthesize through flavins and catechins whereas the last, phlorotannins, are oligomers of phloroglucinol that are exclusively found in brown algae [48].

Phlorotannins, a group of compounds that majorly include dioxinodehydroeckol (eckostolonol), dieckol, eckol, phlorofucofuroeckol A, 7-phloroeckol, and fucofuroeckol A and 8,8′-bieckol, exhibit antioxidant-inhibitory effects against melanin synthesis, skin whitening (tyrosinase inhibition), and UV protection [49][50][51][52][53][54]. Phlorotannins are the most deeply studied phenolic compounds from algae [55]. Their antioxidant power is 2 to 10 times higher when compared to ascorbic acid or tocopherol [56][57], which demonstrates their role as an anti-inflammatory agent [58]. They can act as an anti-UCB protector; Ryu et al. [59] suggested UVB protection by dioxinodehydroeckol from E. cava on the HaCat cells that reduce the provoked apoptosis. Moreover, phlorotannins such as dieckol, dioxinodehydroeckol, eckol, eckstolonol, phlorofucofuroeckol A, and 7-phloroeckol isolated from different marine algae are being researched in cosmetics as whiteners and antiwrinkle agents. They have been shown as promising tyrosinase inhibitors and hyaluronidase inhibitors [60][61][62][63][64][65][66].

Phenolic compounds such as bromophenol and benzoic acids have been fully isolated and characterized from red seaweeds [67]. Pérez et al. [68], Duan et al. [69], and Choi et al. [70] studied the antioxidant activity of Vertebrata constricta (formerly Polysiphonia stricta or P. urceolata) (Rhodophyta)-derived phenolic compounds, but that depends on the brominated units and degree of bromination. In the same study, Symphyocladia latiuscula-derived bromophenols reported antioxidant activity that was studied by DPPH assay.

Other classes of phenolic compounds have been investigated for varieties of applications in cosmetics. Tanna et al. [71] found the antioxidant activity of various flavonoids such as kaempferol and quercetin from Caleurpa spp. (Chlorophyta). Acanthophora spicifera (Rhodophyta)-derived flavonoid demonstrates a mixture of chlorogenic acid (69.64%), caffeic acid (12.86%), vitexin-rhamnose (12.35%), quercetin (1.41%), and catechol (0.59%), and this flavonoid-enriched extract has revealed antioxidant activity [72][73]. These molecules are multi-active components that play a role in UV radiation absorption, the neutralization of ROSs, and the inhibition of radical reactions, etc., which makes them important contributors to cosmeceuticals [74].

Makkar and Chakraborty [75] studied a chromene-based phenolic compound from Gracilaria opuntia (Rhodophyta) that has been reported to have antioxidant activity in in vitro assays. Pillai et al. [76] reported the role of antioxidants in the prevention of extracellular matrix damage, the activation of MMPs, and inhibition of their expression. These molecules scavenge and quench radical oxygen species (ROS).

There are several extraction techniques available for obtaining phenolic compounds; two general techniques are found: conventional and nonconventional extraction techniques. The conventional techniques include simple solid solvent extraction, whereas nontraditional techniques include microwave-assisted extraction, subcritical CO2 extraction, ultrasound-assisted extraction, and pressurized liquid extraction, among others.
The most important step is to select an appropriate extraction method, since many procedures of extraction are available nowadays. Traditional methods include heat-assisted extraction or maceration, percolation, and Soxhlet extraction as reported by Aires [81]. One of the classical methods is maceration, in which the components are extracted by submerging marine algae in an appropriate solvent or solvent combinations [82]. On a large scale, at the industrial level, ethanol is preferred as a solvent for extraction because of its economic benefit [83]. This procedure is widely applicable in current practice. In this method, methanol, ethanol, acetone, water, and ethyl ethanoate in different proportions are commonly utilized for extraction. The selection can be done based on polarity. Due to the hydrophilic nature of these compounds, hydroalcoholic solvent is the most effective for this process. Some previous studies have mentioned the combination of solvents, with acids such as citric acid, tartaric acid, or HCl potentially improving the extraction of phenolic compounds [84][85]. In traditional procedures, Soxhlet extraction provides better results of extraction in terms of yield, although this technique also presents some demerits such as the degradation of temperature-sensitive compounds as some phenolic acids, tannins, and anthocyanins require a large number of solvents and are time-consuming. Besides, this classical Soxhlet extraction method is a continuous process; the solvent can easily be recycled, and less time and less solvent are used than in maceration and percolation [86].
A non-conventional technique, Pressurized Liquid Extraction (PLE), also known as extraction with pressurized solvent, includes high pressure (1 to 15 MPa), short processing time, and temperature ranges of about 50 to 200 °C using a low volume of nontoxic solvent and thus being considered a green technology. Otero et al. [87] observed a highest extraction yield of 37% for 80 °C and 52% for 160 °C using diluted ethanol from the brown alga Laminaria ochroleuca (Phaeophyceae) at 100 bars. Microwave-assisted extraction is mainly used for the extraction of polyphenols and polysaccharides. This method can be performed in open (at atmospheric pressure) or closed (higher than atmospheric pressure) vessels. In this method, electromagnetic waves cause changes in cell structures. Two mechanisms, ionic conduction, and dipole rotation, transform electromagnetic energy into calorific energy [88][89].

More
© Text is available under the terms and conditions of the Creative Commons Attribution (CC BY) license; additional terms may apply. By using this site, you agree to the Terms and Conditions and Privacy Policy.
Upload a video for this entry
Information
Subjects: Biochemistry & Molecular Biology
Contributors MDPI registered users' name will be linked to their SciProfiles pages. To register with us, please refer to https://encyclopedia.pub/register :
Haresh S. Kalasariya
,
Leonel Pereira
View Times: 331
Revisions: 2 times (View History)
Update Date: 05 Dec 2022
Table of Contents
1000/1000
Hot Most Recent