+1 point
Thank you for your contribution! You can also upload a video entry related to this topic through the link below: https://encyclopedia.pub/user/video_add?id=37871
Check Note
2000/2000
Atomic Radii of the Elements (Data Page)

Edit
Upload a video
The content is sourced from: https://handwiki.org/wiki/Physics:Atomic_radii_of_the_elements_(data_page)

The atomic radius of a chemical element is the distance from the center of the nucleus to the outermost shell of an electron. Since the boundary is not a well-defined physical entity, there are various non-equivalent definitions of atomic radius. Depending on the definition, the term may apply only to isolated atoms, or also to atoms in condensed matter, covalently bound in molecules, or in ionized and excited states; and its value may be obtained through experimental measurements, or computed from theoretical models. Under some definitions, the value of the radius may depend on the atom's state and context. Atomic radii vary in a predictable and explicable manner across the periodic table. For instance, the radii generally decrease rightward along each period (row) of the table, from the alkali metals to the noble gases; and increase down each group (column). The radius increases sharply between the noble gas at the end of each period and the alkali metal at the beginning of the next period. These trends of the atomic radii (and of various other chemical and physical properties of the elements) can be explained by the electron shell theory of the atom; they provided important evidence for the development and confirmation of quantum theory.

Note: All measurements given are in picometers (pm). For more recent data on covalent radii see Covalent radius. Just as atomic units are given in terms of the atomic mass unit (approximately the proton mass), the physically appropriate unit of length here is the Bohr radius, which is the radius of a hydrogen atom. The Bohr radius is consequently known as the "atomic unit of length". It is often denoted by a0 and is approximately 53 pm. Hence, the values of atomic radii given here in picometers can be converted to atomic units by dividing by 53, to the level of accuracy of the data given in this table. 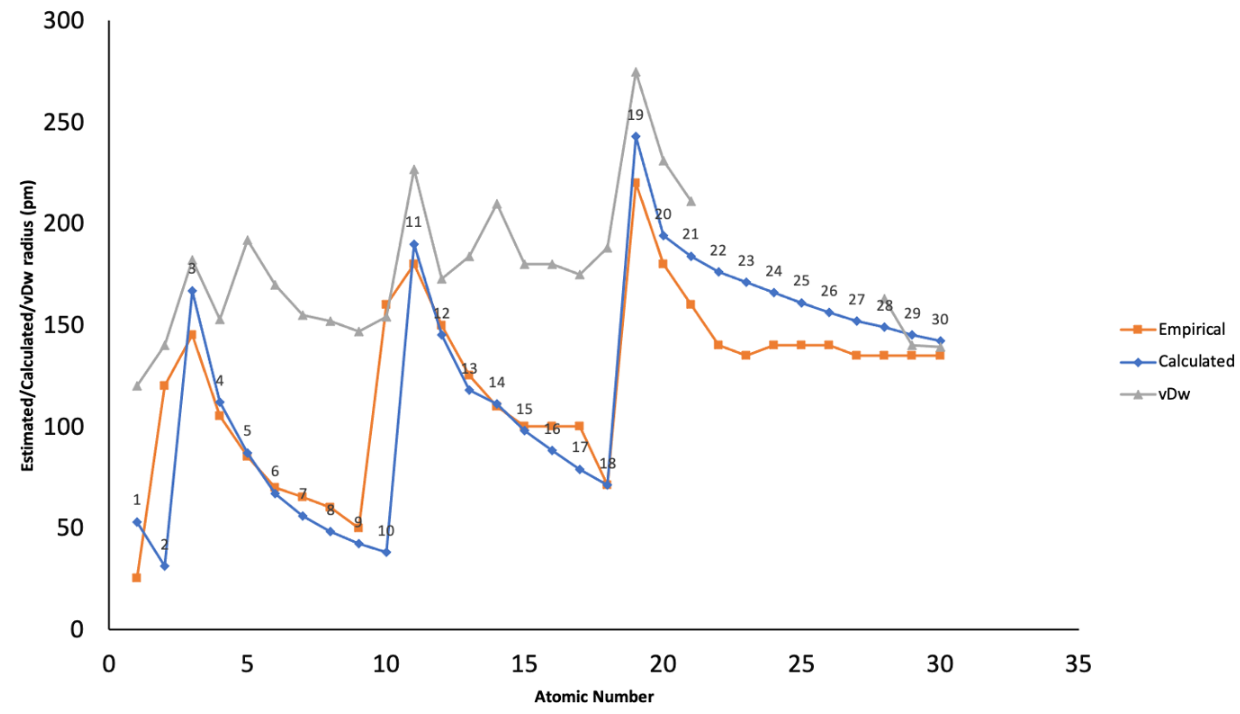 More
©Text is available under the terms and conditions of the Creative Commons-Attribution ShareAlike (CC BY-SA) license; additional terms may apply. By using this site, you agree to the Terms and Conditions and Privacy Policy.
Upload a video for this entry
Information
Subjects: Others
Contributor MDPI registered users' name will be linked to their SciProfiles pages. To register with us, please refer to https://encyclopedia.pub/register :
HandWiki
View Times: 95
Entry Collection: HandWiki
Revision: 1 time (View History)
Update Date: 02 Dec 2022
Table of Contents
1000/1000
Hot Most Recent