+1 point
Thank you for your contribution! You can also upload a video entry related to this topic through the link below: https://encyclopedia.pub/user/video_add?id=37600
Check Note
2000/2000
East African Lion

Edit
Upload a video
The content is sourced from: https://handwiki.org/wiki/Biology:East_African_lion

The East African lion is a Panthera leo melanochaita population in East Africa. During the 20th century, lion populations in this part of Africa became fragmented and declined in several range countries due to loss of habitat and prey base, poaching and killing of lions to protect livestock and human life. In 2005, a Lion Conservation Strategy was developed for East and Southern Africa. Today, lion populations are stable only in large protected area complexes. The scientific name P. l. melanochaita was proposed for the Cape lion in 1842 that was eradicated in the mid-19th century. P. l. melanochaita differs genetically from P. leo leo; the two subspecies probably diverged at least 50,000 years ago. 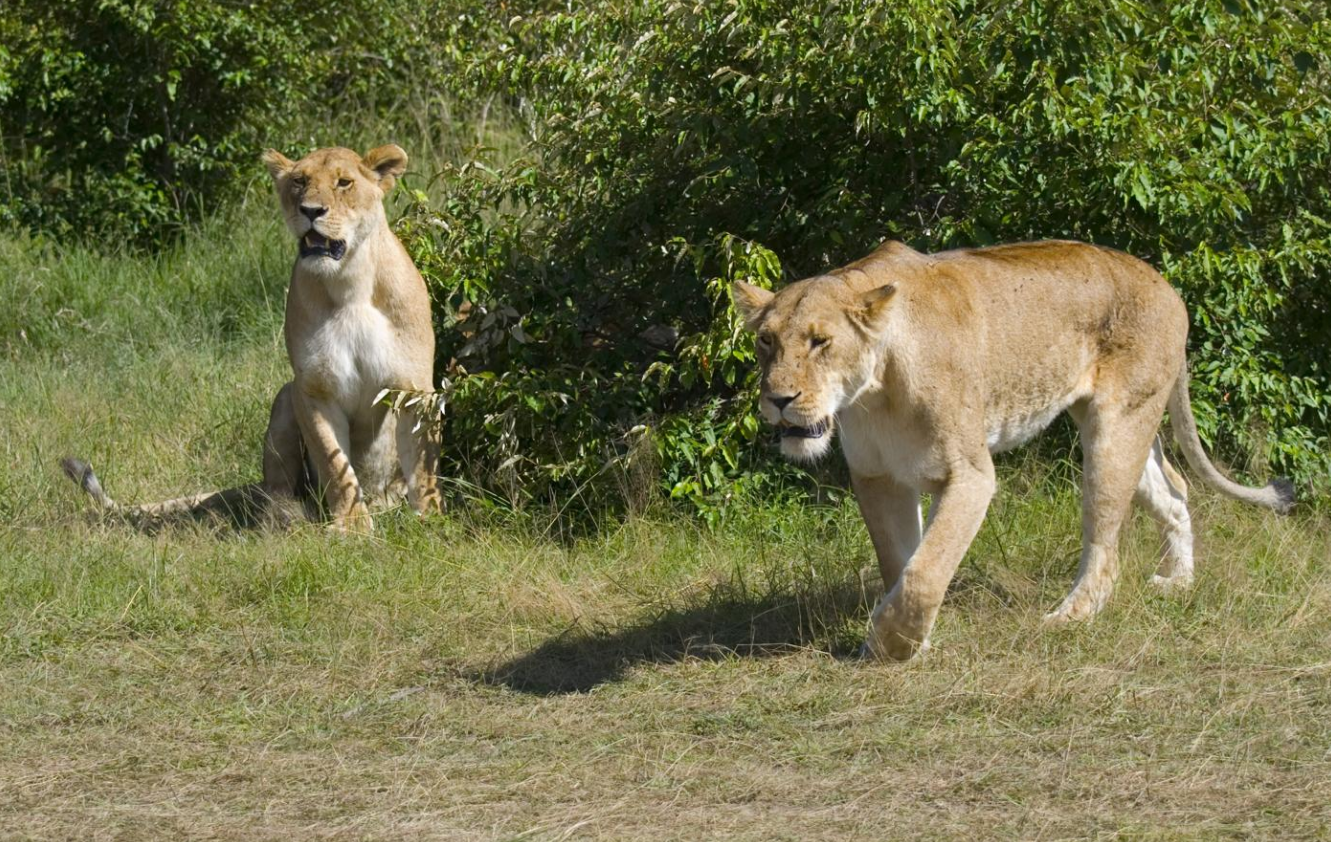 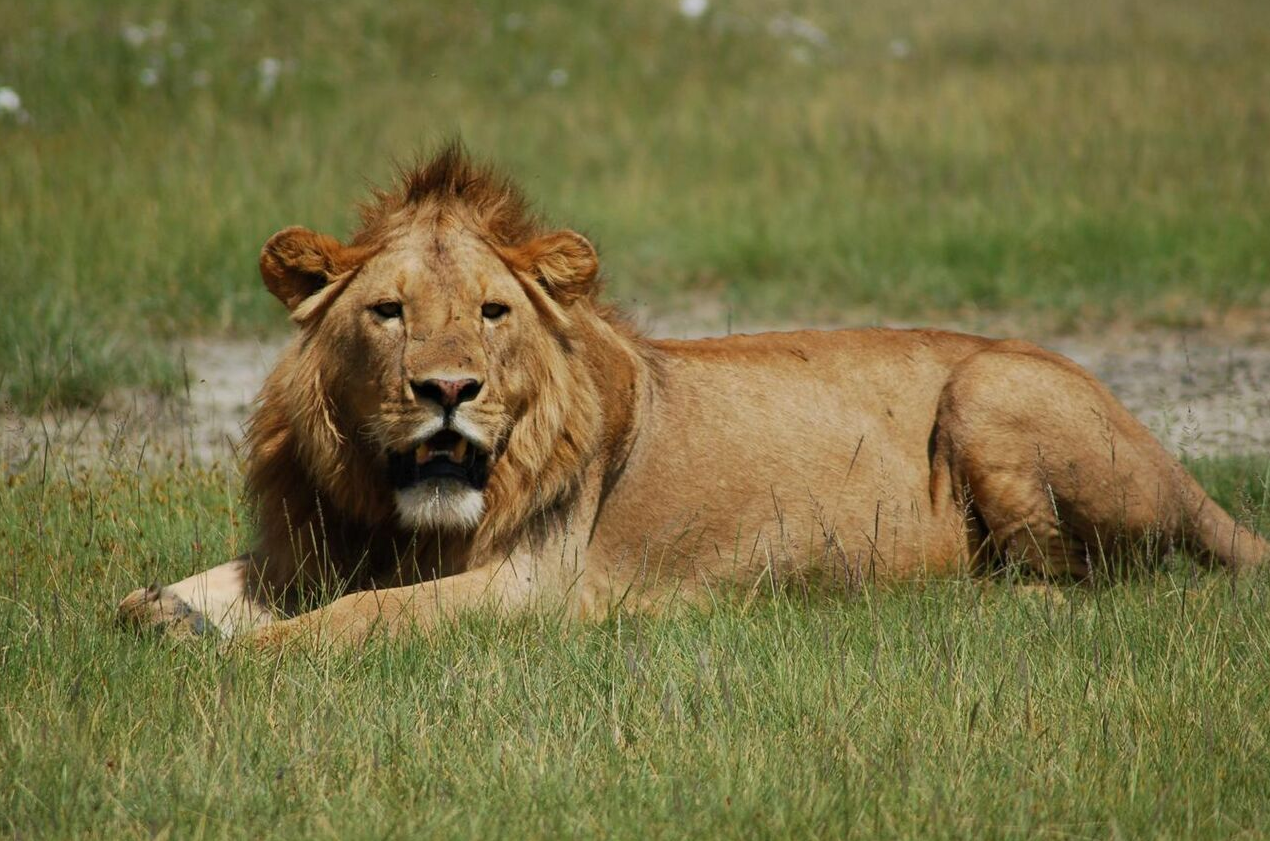 The lion's fur varies in colour from light buff to dark brown. It has rounded ears and a black tail tuft. Average head-to-body length of male lions is 2.47–2.84 m (8.1–9.3 ft) with a weight of 148.2–190.9 kg (327–421 lb). Females are smaller and less heavy.[1] The Cape lion had a black mane extending beyond the shoulders and under the belly.[2] Until the late 20th century, mane colour and size was thought to be a distinct subspecific characteristic.[3] In 2002, research in Serengeti National Park revealed that mane darkens with age; its colour and size are influenced by environmental factors like temperature and climate, but also by individual testosterone production, sexual maturity and genetic precondition. Mane length apparently signals fighting success in male–male relationships.[4] 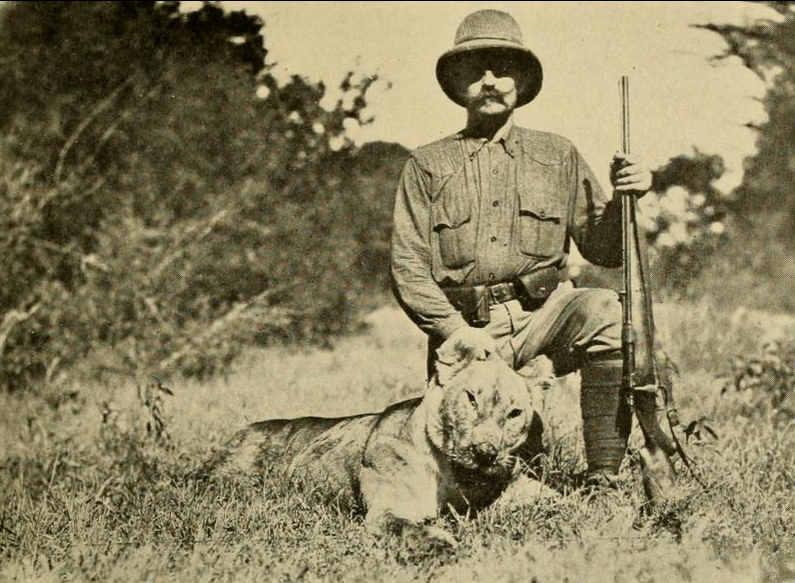 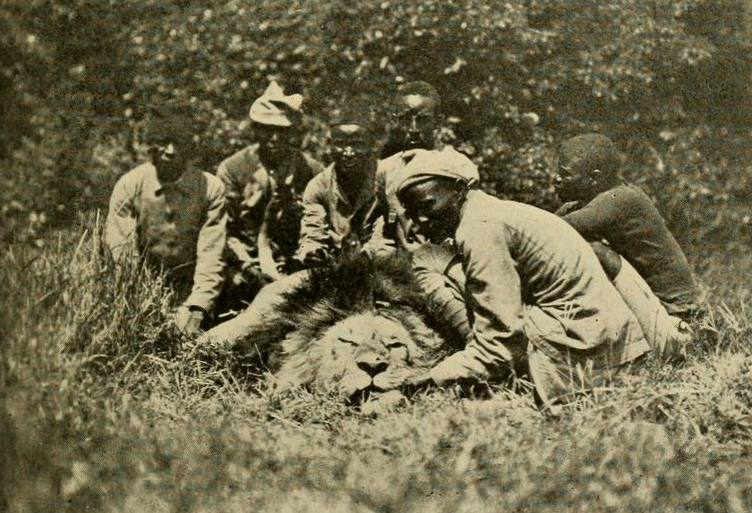 Dispute over the validity of these purported subspecies continued among naturalists and curators of natural history museums until the early 21st century.[3][12][13][14]

In 2017, the Cat Classification Task Force of the IUCN Cat Specialist Group revised lion taxonomy based on results of phylogeographic research on lion samples. Two lion subspecies are now recognised:[15]

Since the beginning of the 21st century, several phylogenetic studies were conducted to aid clarifying the taxonomic status of lion samples kept in museums and collected in the wild. Scientists analysed between 32 and 480 lion samples from up to 22 countries. They all agree that the species lion comprises two evolutionary groups, one in East and Southern Africa, and the other in the northern and eastern parts of its historical range; these groups diverged about 50,000 years ago. They assume that tropical rainforest and the East African Rift constituted major barriers between the two groups.[16][17][18][19][20][21] 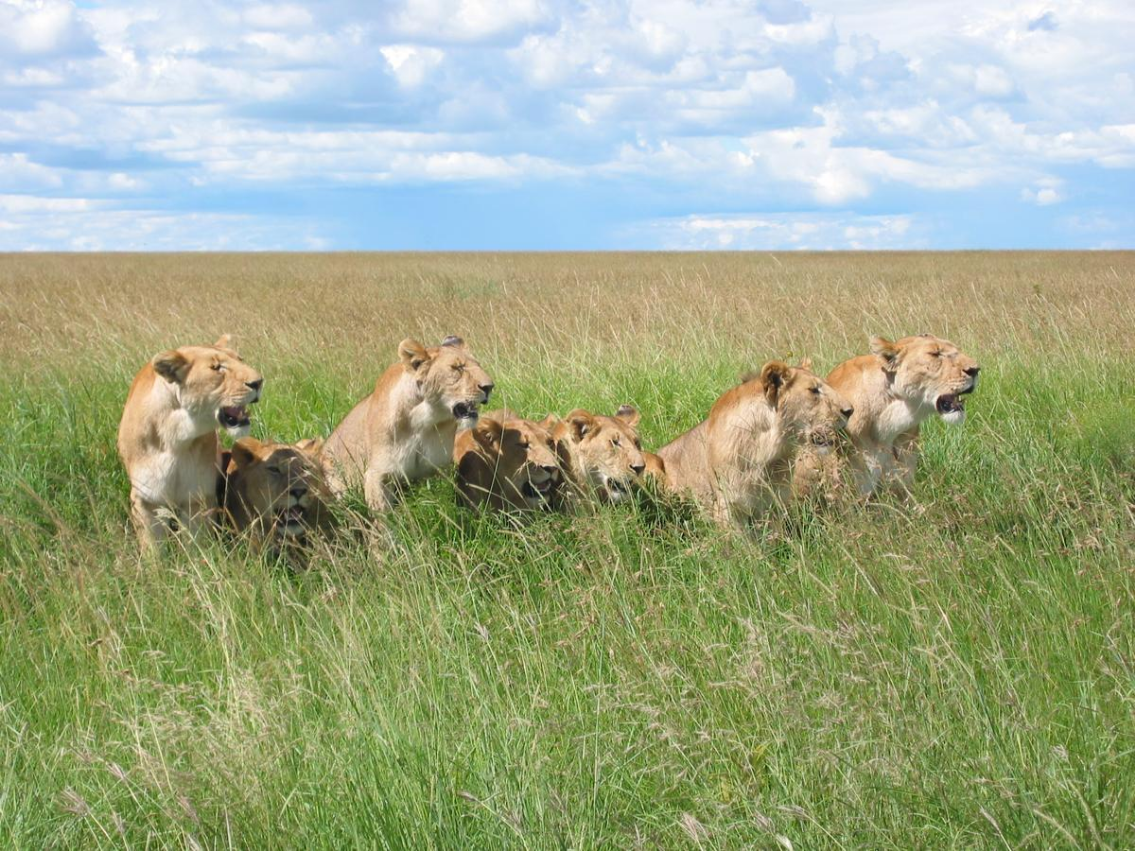 The Serengeti and Maasai Mara National Parks are a lion stronghold in East Africa with a stable lion population[22] https://handwiki.org/wiki/index.php?curid=1547172

Contemporary lion distribution and habitat quality in East Africa was assessed in 2005, and Lion Conservation Units (LCU) mapped.[31] Between 2002 and 2012, educated guesses for size of populations in the East African LCUs ranged from 20,485 to 18,308 individuals.[27][32]

The LCUs Serengeti-Mara, Tsavo-Mkomazi, Ruaha-Rungwa and Selous are currently considered lion strongholds in East Africa. They host more than 500 individuals each, and the population trend is stable.[32] 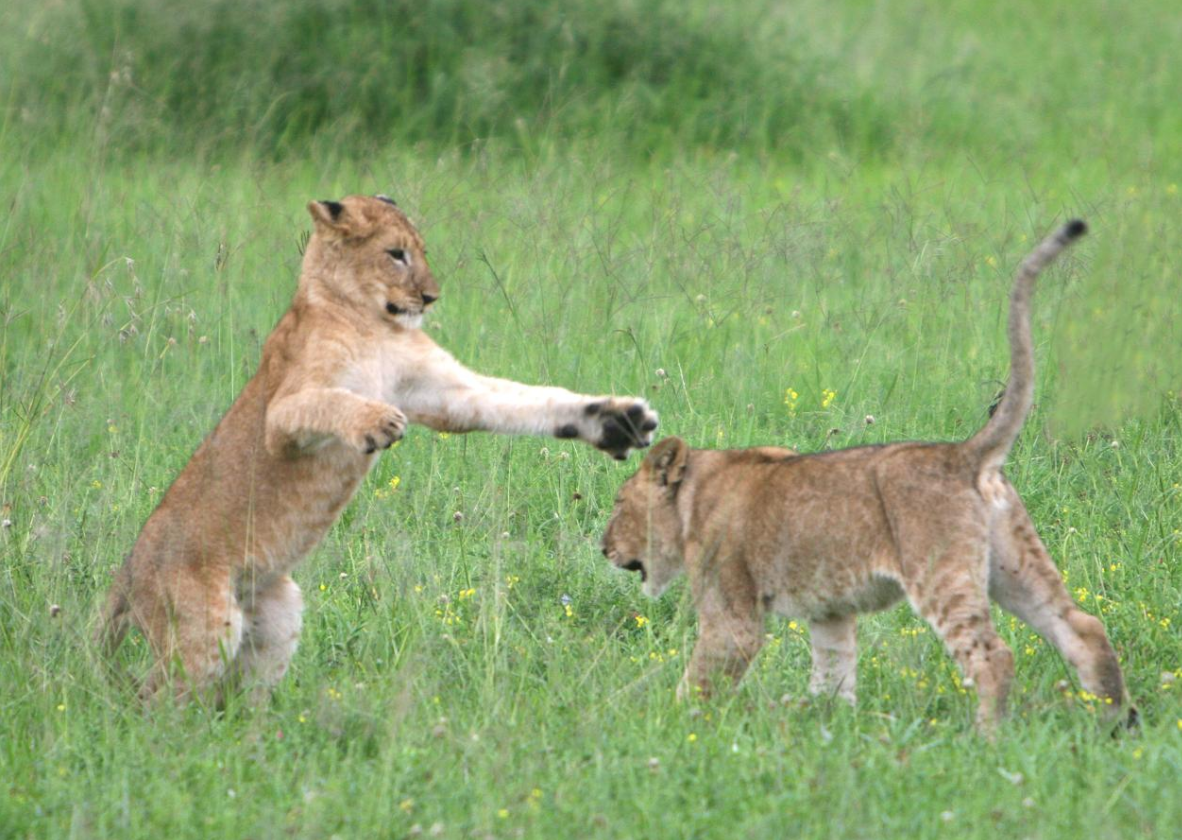 In the Serengeti National Park, lion prides have been monitored since 1966.[35] Between 1966 and 1972, two observed lion prides comprised between seven and 10 females each that had litters once in 23 months on average.[36] Litters contained two to three cubs. Females suckled cubs of other females, when their cubs were of similar age. Of 87 cubs born until 1970, only 12 reached the age of two years. Cubs died due to starvation in months when large prey was not available, following take-over of prides by new males, or of unknown causes.[37] Male lion coalitions were more successful in taking over prides than single males. Coalitions of six males stayed longer with a pride than smaller male groups.[38] Between 1974 and 2012, 471 coalitions comprising 796 male lions entered a study area of 2,000 km2 (770 sq mi). Of these, 35 nomadic coalitions included male lions that were born in the area but had left and returned after about two years of absence. Coalitions became resident at between 3.5 and 7.3 years of age.[39]

In Somalia's Lower Shabeelle area, hunters kill female lions and collect cubs to trade them in wildlife markets, where they fetch at between US$ 500 and 600 per cub. In southern Somalia, people also keep lion cubs for export.[40]

All lion populations in Africa have been included in CITES Appendix II since 1975.[41] Because of the negative impact of trophy hunting, it was proposed in 2004 to list them all in CITES Appendix I to reduce exports of lion trophies and implement a stricter permission process.[42]

In 2006, a Lion Conservation Strategy for East and Southern Africa was developed in cooperation between IUCN regional offices and several wildlife conservation organisations. The strategy envisages to maintain sufficient habitat, ensure a sufficient wild prey base, make lion-human coexistence sustainable and reduce factors that lead to further fragmentation of populations.[31]

More
©Text is available under the terms and conditions of the Creative Commons-Attribution ShareAlike (CC BY-SA) license; additional terms may apply. By using this site, you agree to the Terms and Conditions and Privacy Policy.
Upload a video for this entry
Information
Subjects: Zoology
Contributor MDPI registered users' name will be linked to their SciProfiles pages. To register with us, please refer to https://encyclopedia.pub/register :
HandWiki
View Times: 113
Entry Collection: HandWiki
Revision: 1 time (View History)
Update Date: 01 Dec 2022
Table of Contents
1000/1000
Hot Most Recent