Submitted Successfully!
Thank you for your contribution! You can also upload a video entry related to this topic through the link below:
https://encyclopedia.pub/user/video_add?id=3724
Check Note
2000/2000
Pelvic Girdle Pain
Edit
Upload a video
This entry is adapted from 10.3390/jcm9123992

Pelvic girdle pain (PGP) refers specifically to musculoskeletal pain localised to the pelvic ring and can be present at its anterior and/or posterior aspects. Causes such as trauma, infection and pregnancy have been well-established, while patients with hypermobile joints are at greater risk of developing PGP.

Pelvic girdle pain (PGP) refers specifically to musculoskeletal pain localised to the level of the posterior iliac crest and the gluteal fold, and occasionally over the anterior and posterior elements of the bony pelvis[1]. There are many causes of pelvic pain overall, including trauma, infections of soft tissue, bone or underlying viscera, lower-back pain syndromes, pregnancy, joint hypermobility and disorders of connective tissues[1][2]. Given the broad range of possible causes, when managing these patients, it is important for an extensive history and clinical examination to be conducted, followed by appropriate investigations to facilitate accurate diagnosis—and to distinguish between aetiologies.

Joint hypermobility (JH) places a great level of strain on an affected individual’s musculoskeletal system. JH occurs secondary to increased elasticity of the soft tissues that support a joint, tendons and ligaments, which allows a greater range of motion[3]. A tool such as the Beighton score which uses five simple manoeuvres can be used to screen individuals for hypermobile joints in clinical practice (Figure 1). Complications can include joint pain, dislocations and instability which can limit daily activities and quality of life. Previous research has highlighted that there may be a link between JH and development of osteoarthritis secondary to the increased stress placed on joints, however studies have reported mixed findings[4][5][6][7][8][9]. Although JH has disadvantages linked to increased risk of injury and anxiety, particularly in contact sports, in others such as gymnastics and ballet it may in fact be advantageous[10][11][12][13]. 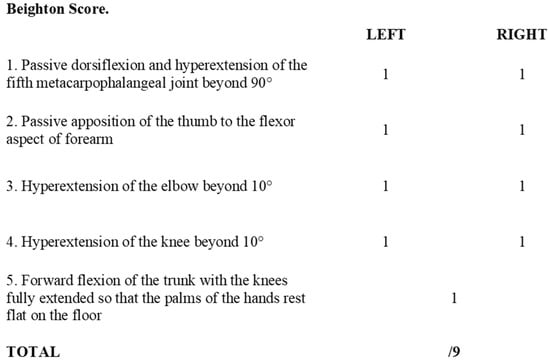 The classification framework for overall Joint Hypermobility (JH) and Ehlers-Danlos Syndrome subtypes were updated in 2017, before which the definitions were quite different. Prior to this, the commonly used terms were ‘joint hypermobility syndrome’ and hEDS alone.[15][16] One must bear this in mind when reading older literature.

Ehlers-Danlos Syndrome (EDS) is a genetically inherited connective tissue disorder characterised by hypermobile joints, friable tissues and hyperextensible skin. The first attempt to classify the condition was in 1936 by Weber, who termed it ‘Ehlers-Danlos Syndrome’ in honour of early published cases by these authors[17] In 2017, the current revised classification known as the international classification of EDS was created[16], which updated the previous set of definitions known as the 1998 Villefranche Nosology. This builds on an increased understanding of EDS: further subclassifications were generated, which refer to inheritance patterns, genetic abnormalities and affected proteins. The 2017 international classification lists clinical criteria that are suggestive of 13 EDS subtypes. The five most common subtypes are summarised in Table 2. The revised 2017 classification has clear, defined criteria for the diagnosis of hEDS, and a less-restrictive diagnosis criteria for HSD when patients may present with some features of hEDS, but not enough to be given a diagnosis of hEDS[15][16]. It is important to note that joint hypermobility (JH) can present in several subtypes of EDS, and not just hEDS[15][16].

As there is no investigation to diagnose hEDS, it is still diagnosed clinically. Attempts to find a genetic test have proved difficult due to the clinical and genetic heterogeneity of this syndrome[18][19][20]. An in vitro study utilising skin biopsies from patients with hEDS and hypermobility spectrum disorder (HSD) has identified a possible signalling pathway (αvβ3-ILK-Snail1/Slug axis) which promotes the transition of fibroblasts to myofibroblasts in hEDS and HSD patients, which was absent in biopsies from patients with classical EDS and vascular EDS[21]. Although further research is required on a larger sample of patients, this provides some insight into future directions of molecular testing which could support a clinical diagnosis of hEDS and HSD. Interestingly, further research is still required to differentiate between hEDS and HSD.

Given the relatively recent changes in 2017 used to describe JH, HSD and hEDS, it is difficult to determine the exact prevalence of these conditions. The distribution of hypermobility between the genders is however well reported to show a female predominance[14][22][23][24][25][26][27]. This greater prevalence in females has identified an increased concern related to pregnancy. Studies have found that females with JH are at increased odds of developing PGP during pregnancy than those who do not have JH[28]. A study investigating pregnancy complications in those with EDS identified that the prevalence of pelvic pain and instability was almost four-times greater than those without EDS [29]. Small case series have further data to support this with up to 88% of hEDS patients experiencing PGP during pregnancy[30]. The current available data is limited by study design and would benefit from larger prospective studies using the newer 2017 EDS criteria for diagnosis. This may however prove challenging due to undiagnosed cases, limited understanding, and rarity of cases.

PGP is a complex disorder that is difficult to diagnose when considering its overlap in presentation with pathology of the pelvic viscera and spinal pathologies, making it primarily a diagnosis by exclusion. Assessment of existing literature is further challenged by the variety of names used to describe this condition, with similar difficulties associated with HSD and hEDS. Modern literature has however become more standardised by using PGP and HSD since the creation of newer classifications and guidelines[16][31]. This proved challenging when conducting a literature search for this review, where many papers were excluded due to being irrelevant. The broad search implemented was necessary, as when searching with the correct terms as discussed above, no results were found. It is for this reason that a broader search was conducted, with a screening process to filter the many publications relating to other causes of pelvic pain, which were not musculoskeletal.

Regardless, this review has identified HSD as a potential risk factor for the development of PGP, requiring a multidisciplinary approach to manage, provide adequate support, and appropriately diagnose rare conditions such as EDS. If not already incorporated into current clinical care pathways, a suggestion would be made to involve a rheumatologist if there is suspicion of HSD/hEDS, in order to ensure a holistic approach is pursued to identify any associated connective tissue problems, particularly those that are life-threatening such as aortic dilatations. Increasing awareness of patients and clinicians is also vital to ensure appropriate labelling of diagnoses related to PGP or HSD, as there is concern of incorrect or underdiagnosis of disease, with unknown exact prevalence[24].

A further challenge we face when interpreting current literature on management of outcomes is related to the broad variety of PROMs used in studies, particularly global health measures such as the SF-36, ODI, EQ-5D and Short Musculoskeletal Function Assessment which are not disease-specific as well as limiting translation and comparison of study findings, particularly where identical questionnaires were reported on differently[32][33]. PROMs related to the pelvis exist, such as the Pelvic Girdle Questionnaire, Majeed, Iowa and Orlando scores[34][35][36][37]. The latter three have been reviewed with concerns highlighted lack of emotional and mental health assessment and limited by floor and ceiling effects where individuals with impaired function may score well and vice versa. Moreover, they have unknown reliability and responsiveness particularly in longitudinal studies[38][39]. The Pelvic Girdle Questionnaire has been widely validated for use in pelvic pain in pregnant and postpartum individuals, however its use has not been validated in patients with PGP secondary to trauma and other causes[34][40][41][42][43][44][45][46]. The Pelvic Girdle Questionnaire does not contain any items that are gender or pregnancy specific. A future study exploring its validity as a functional outcome measure in trauma, pubic symphysis and SIJ dysfunction patients may highlight it as a suitable tool for such patients after its success in pregnant and postpartum women, potentially preventing the need to develop a new measure.

Several recommendations can be made based on the findings of this literature review. Upon diagnosis of PGP, completion of appropriate PROMs would be advised to monitor global health, functional status, and mental health using validated measures. This allows further assessment as to whether patients with impaired mental health would benefit from a psychological or psychiatric referral to improve their symptoms and rehabilitation. In addition, it would allow monitoring of functional status which can be repeated throughout treatment and allow more meaningful assessment of post-intervention outcomes. For pregnancy-related PGP, we would advise the use of the Pelvic Girdle Questionnaire as it is well-validated as previously discussed. For other causes of PGP we advise the use of validated global measures such as the VAS, EQ-5D and SF-36 or ODI, which can be compared to population norms, as the application of pelvic-specific outcomes for this population require further assessment[33][47][48]

It would also be advised to screen patients for JH in a formal manner using the Beighton score, or Five-Point Questionnaire if the Beighton score cannot be applied in clinic, or due to contraindications described earlier in the ‘Diagnosis’ section. Patients should be screened for further features of EDS to assist in the decision to make a referral to a Rheumatologist or EDS specialist, so patients have access to appropriate support services.

More
© Text is available under the terms and conditions of the Creative Commons Attribution (CC BY) license; additional terms may apply. By using this site, you agree to the Terms and Conditions and Privacy Policy.
Upload a video for this entry
Information
Subjects: Obstetrics & Gynaecology ; Others
Contributor MDPI registered users' name will be linked to their SciProfiles pages. To register with us, please refer to https://encyclopedia.pub/register :
Ahmed Ali
View Times: 259
Revisions: 3 times (View History)
Update Time: 11 Oct 2021
Table of Contents
1000/1000
Hot Most Recent