Submitted Successfully!
Thank you for your contribution! You can also upload a video entry related to this topic through the link below:
https://encyclopedia.pub/user/video_add?id=3710
Check Note
2000/2000
Aquaporins and Female Reproductive System
Edit
Upload a video
This entry is adapted from 10.3390/cells9122570

Aquaporins constitute a group of water channel proteins located in numerous cell types. These are pore-forming transmembrane proteins, which mediate the specific passage of water molecules through membranes. It is well-known that water homeostasis plays a crucial role in different reproductive processes, e.g., oocyte transport, hormonal secretion, completion of successful fertilization, blastocyst formation, pregnancy, and birth. Further, aquaporins are involved in the process of spermatogenesis, and they have been reported to be involved during the storage of spermatozoa. It is noteworthy that aquaporins are relevant for the physiological function of specific parts in the female reproductive system.

An important milestone in the study of water fluxes through biological membranes was the discovery of an aqueous pore serving as a specific water channel (Figure 1), today, known as aquaporin (AQP). In 1992, Peter Agre et al. described this structure for the first time in erythrocytes, and it was termed Aquaporin-1 (AQP1) and proved to be a paradigm shift in the knowledge of molecular and trans-membrane water transport [1]. Since water is the main and essential component in a wide variety of cells, AQPs are very important since they are able to increase the water permeability of cell membranes [1][2]. Water movements through cell membranes are important features for the osmoregulation and water homeostasis of a cell [3][4]. It is well-known that biological membranes with their hydrophobic character of the lipid bilayer have an intrinsic permeability for water due to their lipid composition [5]. Since the first discovery of AQP1 until today, a total of thirteen AQP isoforms have been identified in humans (AQP0–12) and are all classified as membrane channels that contribute to the permeation of water through membranes, due to osmotic gradients [6][7]. To date, the mRNA or protein expression of the thirteen human aquaporin isoforms have been described in numerous organs and tissues. The classification of human AQPs into three groups is based on the primary structure and permeation abilities of AQPs [8][9][10]. In general, the architecture of AQPs in cell membranes can be described as homo tetrameric and each monomer constitutes a pore, which is functionally independent [11]. The discovery of AQPs started with ground-breaking experiments in 1992, where a glycosylated component of a 35–60 kD protein of human erythrocytes was described on the electrophoretogram. Only few years later, a new integral membrane protein of human erythrocytes was described, which was composed out of a non-glycosylated component (28 kD) and a glycosylated component (35–60 kD). This functional unit of a membrane water transporter was named “CHIP28” (channel-forming integral protein). However, in 1993, CHIP28 was renamed AQP1 by Agre et al., who were Nobel Prize laureates in chemistry for the discovery of water channels [12][13] in 2003. Since that time, over the last three decades, AQPs have been described as being present in several organ systems, and in this paper, their importance for the female reproductive system is elaborated. 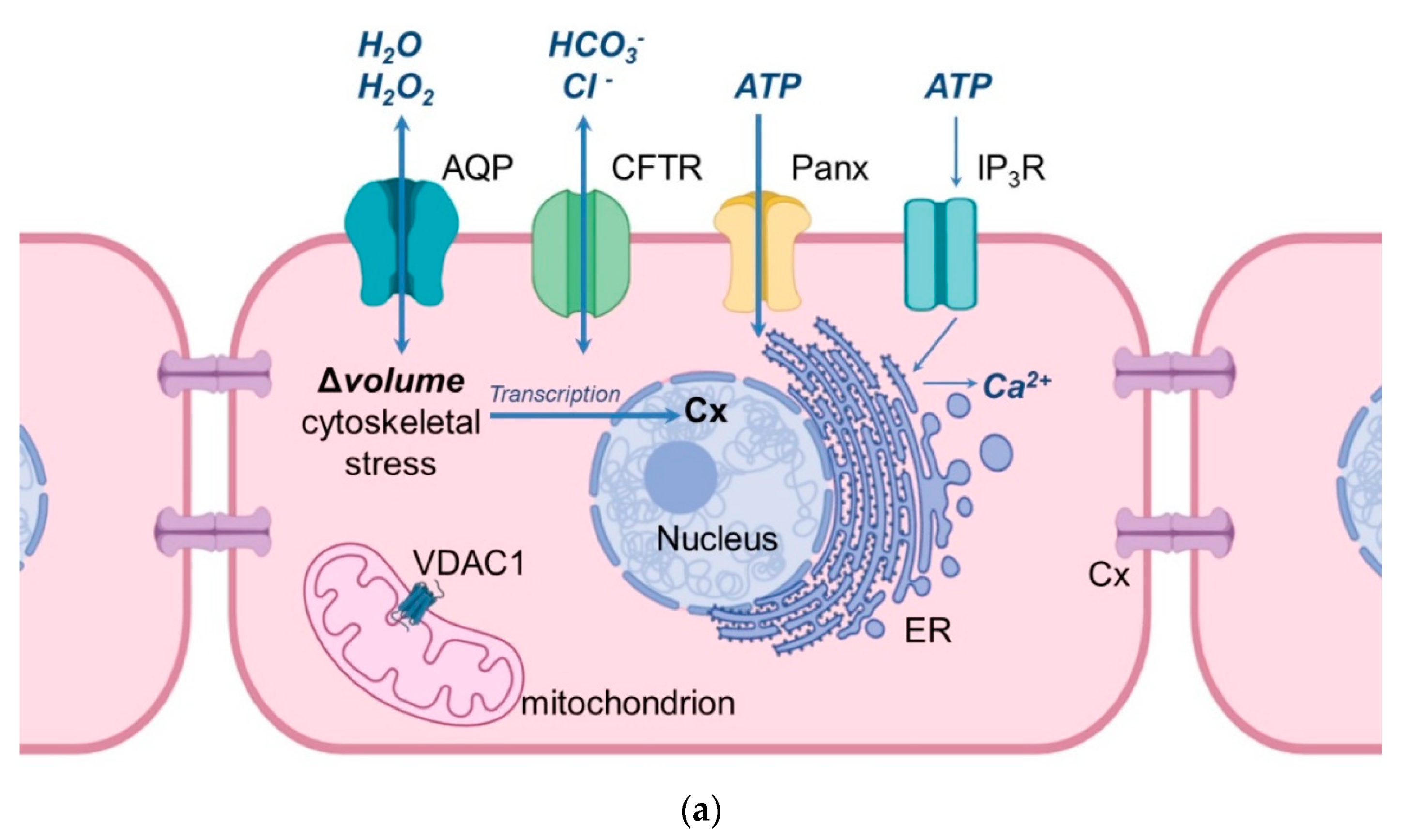 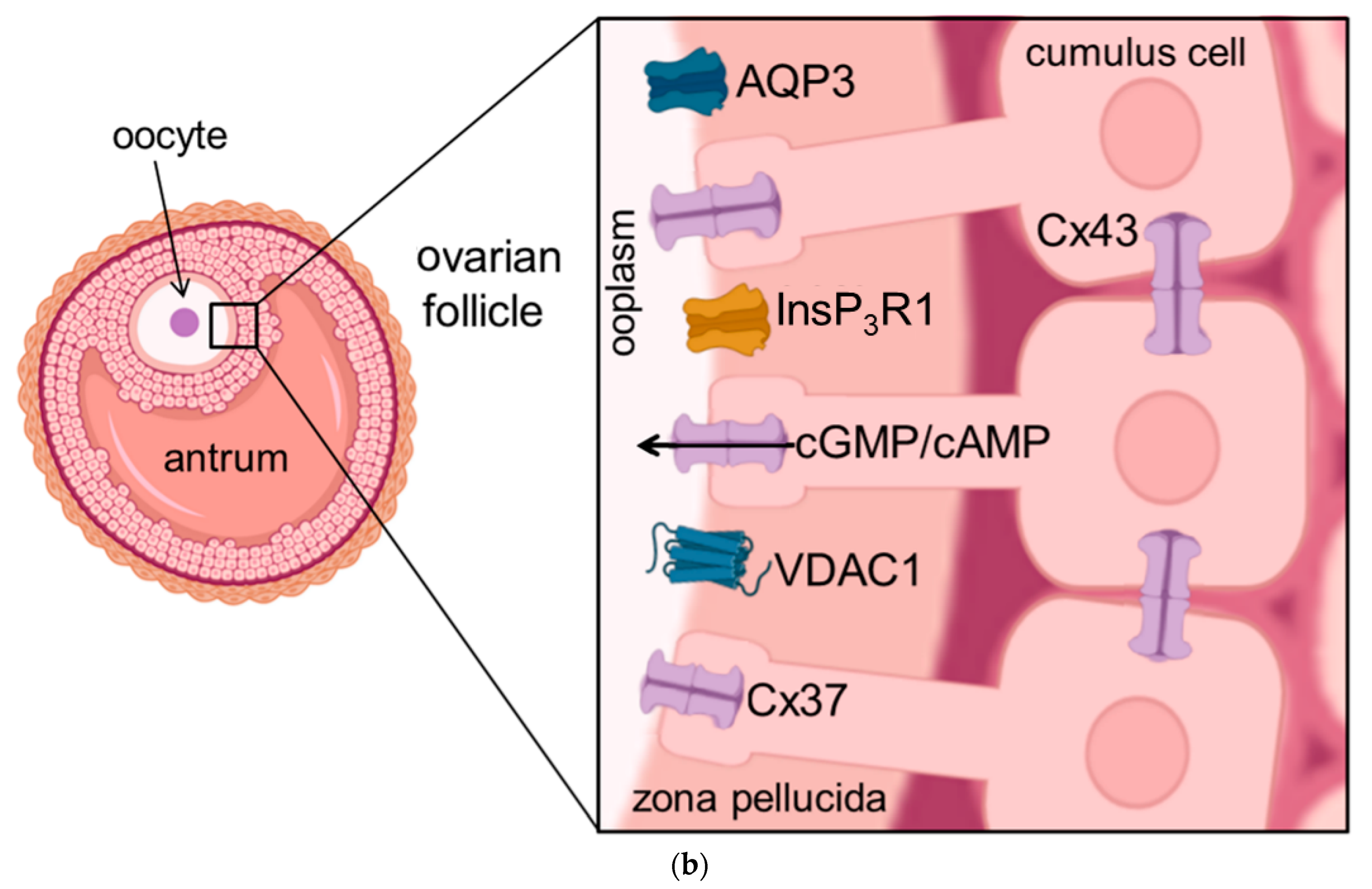 Previous studies have provided strong evidence, that at least eleven aquaporin isoforms, i.e., AQP 1, 2, 3, 4, 5, 6, 7, 8, 9, 11, and 12, have been identified in the female reproductive tract of different mammals, including the human, ovine, canine, and porcine species, and rodents. The first aquaporin in the female reproductive system was confirmed by isolating the complementary DNA encoding for a water channel generated from a human uterus. In this first report, the cloned cDNA appeared with a high (99.8%) homology to the 28 kDa human erythrocyte CHIP28 which was earlier mentioned [13]. Further, Li et al., who investigated the cDNAs of CHIP28 and uterus AQP, showed that the primary structures deduced from the cDNAs show 99% identity and the only difference is an alanine to valine substitution at position 45 of the human CHIP28 [14][15]. Some years later, the localization of AQP1 in rat uterine tissue was confirmed by mRNA expression [16]. In general, aquaporins in the female reproductive system appear to be involved in water movement at an intraluminal, interstitial, and capillary level, and their expression seems to be regulated by steroid sex hormones e.g., progesterone [17][18][19][20]. Due to these results provided by numerous research groups, aquaporins appear to be important for the female reproductive physiology, which will be discussed in the following section in a more detailed fashion.

2.1. The Expression of Aquaporins in the Vagina

2.2. Aquaporins and the Functioning of the Ovary

Interestingly, AQP1 localization in the ovary is comparable to its localization in the vagina, i.e., in the microvascular and in the epithelial cells of small blood vessels, and its expression is rarely present in ovarian tumor cells [25][26]. The relative mRNA abundance for AQP1, 2, 3, and 4 was investigated in human ovarian follicles. More precisely, the expression of these four AQPs was present in theca and granulosa cells (GC) and their expression seemed to be dependent on the time to ovulation [27]. Therefore, it was assumed that the relative mRNA expression of AQP1–4 in the human ovary is controlled by ovarian hormones. Furthermore, a previous study provided evidence that AQP7–9 are also expressed in ovarian follicles of rats, where they most likely play a role during follicular development since AQPs seem to be responsible for the trans-cellular movement of H2O to form the antrum in antral follicles [28]. It was also shown that the mRNA expression of AQP5, 7, 8, 11, and 12 was detectable not only in neonatal murine ovaries, but also in murine GC of pups at the age of four weeks [29][30]. Further, the expression of mRNA and proteins has been reported for AQP5, 8, and 9, which appeared to be localized in the epithelium of rat oviducts, and, more specifically, the immune-localization for AQP5 and 8 was revealed in the cytoplasm, and AQP9 was localized in the plasma membrane [31]. AQP1, 5, and 9 have been demonstrated in the porcine female reproductive system, i.e., in the ovary, oviduct, and uterus [32][33][34][35]. Interestingly, AQP1 was detected in the endothelium of the ovarian capillaries, whereas AQP5 expression was analyzed in cells of primordial follicles, in GC of developing follicles, and epithelial cells of the oviduct [32]. In this part of the female reproductive tract aquaporins appear to be mainly involved in the supply of fluid, which is crucial for follicular development and growth according to the physiological function of the estrous cycle.

2.3. Aquaporins and the Functioning of the Uterus

The relevance of AQPs for the physiological function of the mammalian uterus as the crucial female organ of the reproductive tract is linked again to the vasculature, as already shown in other organs of this tract. The uterus is the major organ involved in feto-maternal communication, and fluid homeostasis during implantation, pregnancy, and early embryonic development [3]. AQP1 is highly expressed in the endothelium of uterine blood vessels [36]. Interestingly, AQP1 gene expression is much more abundant in capillaries and arteries compared to the same size veins of endometrial vasculature in women [37]. Contrary to the localization of AQP1, the expression of AQP2 was present in the glandular endometrial cells generated from women with physiological fertility [38]. Further, AQP3 was also reported to be expressed in the endometrium of women [39], and AQP3 was also highly abundant in human cervical cancer [40], but this will be presented in a more detailed fashion in the section related to female disorders. It has been reported that the AQP9 protein was localized in the cytoplasm of human oviductal epithelial cells [41]. Other studies have shown the expression of AQP1, 5, and 9 in the porcine uterus [33] and porcine oviduct [34] at different estrous cycle stages, namely at days 2–4, at days 10–12, and at days 14–16. Further, in the late stage of estrous cycle (days 18–20), there was also an expression detectable of AQP1, 5, and 9 in the porcine uteri [33] and oviducts [34]. It has also been assumed that the expression dynamics of AQP1, 5, and 9 in pigs appear to be influenced by the stages of the estrous cycle and early pregnancy due to hormonal composition [33][34][35]. Taking into account the uterine fluid homeostasis during the time of embryonic implantation, a fluid reduction has to take place during this crucial time to ensure the close contact of the early embryo to the superficial cells of the endometrium [42]. With regards to this, AQP 5 and 9 mediate the absorption of glandular fluid [3]. After implantation, placentation is also a crucial biological process, and the relevance of AQPs during this process will be reviewed in the following section. To sum up, aquaporins appear to be mainly responsible for creating the proper fluid micro-environment in the uterus and they contribute to the lubrication of the endometrium, which is crucial for sperm movement and implantation.

2.4. Aquaporins and the Functioning of the Placenta

Numerous AQPs have been reported to be present in fetal membranes and are crucial during placentation and early stages of pregnancy. The haemochorialis placenta of the human species has shown a high relative mRNA abundance of AQP1, 3, 9, and 11 in the chorionic villi, whereas the mRNA abundance for AQP4, 5, and 8 was lower in the earlier mentioned part of the placenta [43]. Both gene and protein expression for AQP1, 3, 8, 9, and 11 have revealed the presence of these aquaporins in the human amnion and chorion during the entire length of pregnancy [44][45]. The relative mRNA abundance of AQP1 was reported to be in the placental vasculature [46] and AQP3 gene-expression was detected in the trophectoderm [45]. Further, the localization of the AQP3 protein in the human placenta has been reported in epithelial cells of the chorion and amnion [47]. Evidence has been provided that the expression of AQP4 was decreased in cells of the syncytiotrophoblast, but endothelial and stromal cells of placental villi collected in the first and third trimester of pregnancy showed an increase in AQP4 expression [48], which suggests that the expression of AQP4 appears to be pregnancy stage-dependent. AQP8 and AQP9 have been localized to the epithelium of the human amnion [49] and AQP9 was further shown to be present in trophoblast cells, in cytotrophoblast cells, and syncytiotrophoblast cells of the chorion [50][51]. During the phase of implantation and early placentation, the expression of AQP1, 5, and 9 have also been detected in the porcine species [33][34][35].

More
© Text is available under the terms and conditions of the Creative Commons Attribution (CC BY) license; additional terms may apply. By using this site, you agree to the Terms and Conditions and Privacy Policy.
Upload a video for this entry
Information
Subjects: Cell Biology
Contributor MDPI registered users' name will be linked to their SciProfiles pages. To register with us, please refer to https://encyclopedia.pub/register :
Paweł Kordowitzki
View Times: 431
Revisions: 2 times (View History)
Update Time: 22 Dec 2020
Table of Contents
1000/1000
Hot Most Recent