Submitted Successfully!
Thank you for your contribution! You can also upload a video entry related to this topic through the link below:
https://encyclopedia.pub/user/video_add?id=3685
Check Note
2000/2000
Cardiac Extracellular Matrix
Edit
Upload a video
This entry is adapted from 10.3390/ijms21228610

The extracellular matrix (ECM) is the non-cellular component in the cardiac microenvironment, and serves essential structural and regulatory roles in establishing and maintaining tissue architecture and cellular function. The patterns of molecular and biochemical ECM alterations in developing and adult hearts depend on the underlying injury type and epigenetic guidelines.

The extracellular matrix (ECM) is made up of many proteins that hold together and direct cell adhesion and migration, as well as regulate cellular growth, metabolism and differentiation signals, and cell functions, in healthy and pathological conditions [1][2][3][4][5][6][7]. Cells that lose contact with the ECM via integrins have a higher chance of undergoing apoptosis (programmed cell death) than anchored cells. Cell adhesions intervene in effective bidirectional communications among cells and the extracellular network. ECM–cell interaction and ECM-mediated cell–cell communication play crucial roles in modulating cell adhesion, motility, survival, proliferation, differentiation, and maturation [8][9]. Utilizing integrins and non-integrin receptors (e.g., dystroglycan, sulfatides discoidin domain receptors, CD44, epidermal growth factor receptor, and P-selectin glycoprotein ligand-1) [10][11], cells can detect the physical and biochemical properties of the extracellular framework. The ECM is a highly dynamic structure present in all tissues, and maintains the structure and function of the organ, mediating the development and remodeling of the organ.

The ECM is outlined because of the cell-free elements secreted by cells that consist of macromolecules like scleroprotein, collagens, proteoglycan, hyaluronan, non-collagenous glycoproteins, and proteinases [12][13]. In the cardiac microenvironment, non-myocyte cell types populate the cardiac interstitium [14]. The heart surface is covered by epicardium, a derivative of mesothelial cells. It is termed proepicardium, for its function in giving rise to epicardium and epicardium-derived cells [15]. The cells migrate to the myocardial wall and differentiate into fibroblasts, endothelial cells, and smooth muscle cells [15]. These cells produce and release most matrix proteins, and the cell–ECM communication has an essential role in the programming and development of heart function (Figure 1). Among them, fibroblasts are the major cell type contributing to the ECM synthesis, in order to maintain the myocardial tissue architecture and mediate cell signaling through growth factor interactions and integrins [16]. Human mesenchymal stromal cells can release ECM proteins such as fibronectin (FN) and collagens into the space around cells to promote cell spreading [17]. Endothelial cells are also crucial in vascularization, cardiac function, and/or remodeling by producing ECM proteins such as collagens, laminin, elastin, fibulins, proteoglycans, matrix metalloproteinases (MMPs), tenascin-C (TNC), and thrombospodins (TSPs) [18]. In addition, immune cells in the cardiac microenvironment can also produce ECM proteins such as MMPs to modulate the immune response in the heart, contributing to the regulation of cardiomyocyte survival [19]. Therefore, cell-derived ECM and related signaling play an essential role in regulating cardiovascular function from early development to postpartum life, aging, and possibly disease.

Figure 1. Extracellular matrix (ECM) components and their role in the cardiac microenvironment during heart development and repair. In the cardiac microenvironment, supporting cells, including mesenchymal stromal cells, fibroblasts, endothelial cells, and immune cells, produce the main ECM proteins. These ECM components promote cardiomyocyte differentiation, maturation, and survival, and the interaction between cardiomyocytes and supporting cells, contributing to heart development and repair.

2. The Role of ECM in Heart Development

The ECM provides essential organic components for embryogenesis and tissue maturation. The ECM is conditional; the slightest changes in its physiological state result in ruinous consequences, which might lead to severe defects or even death of the developing embryo (Table 1). In the middle development, the mechanism of dorsal closure could also be a sophisticated method, involving associate degree orchestration of cell–matrix interaction between smooth muscle cells, epithelial tissue cells, and the ECM [20]. A recent study demonstrated that nucleus–cytoskeleton–ECM connections triggered coordinated cardioblast movements, and controlled cardioblast number in Drosophila [21].

The ECM gene expression profiles of embryonic and adult mouse cardiac fibroblasts revealed that higher levels of FN1, collagen genes, TNC, Postn (periostin), and Hapln1 (hyaluronan and proteoglycan link protein 1) were expressed in embryonic than adult hearts [67]. Importantly, embryonic cardiac fibroblasts promote cardiomyocyte proliferation through fibronectin and collagen, involving β1 integrin signaling, leading to myocardial growth and ventricular compaction during cardiogenesis [67]. In an environment rich in abnormal cells and growth factors, activated fibroblasts can produce matrix proteins, proteases and their inhibitors, and regulate matrix metabolism. Due to the pathological maturity, "stress shielding" of fibroblasts through the cross-linked matrix, and macromolecule withdrawal, may lead to quiescence and eventually apoptosis.

Fibulin belongs to a family of five extracellular glycoproteins and mediates the formation of proteoglycan aggregates, elastic fibers, fibronectin microfibrils, basement membrane networks, and supramolecular structures. The expression patterns of biological processes indicate that many fibrins are expressed at epithelial-mesenchymal transition sites during the entire embryogenesis, and the vascular system is related to one of these transition sites [68]. Fibulins 1 and 2 are highly expressed during cardiac valvuloseptal formation. Fibulin 1 is expressed by primordial vascular smooth muscle cells associated with the ventral endothelium of dorsal aortae and developing aortic-arch vessels [52]. In addition, fibulin 2 is expressed by coronary endothelial cells that originate from epicardial cells [69]. Interestingly, fibulin-1 deficiency, but not fibulin 2 deficiency, induced a perinatally lethal phenotype with a defective endothelial basement membrane of small vessels in mice [70]; this may be due to the functional compensation of fibulin 1.

Few studies have investigated the role of TSPs in cardiac development. Increased expression of TSP-1 in the second trimester was demonstrated to cause defects in the cardiovascular system and even embryonic lethality [71]. Conversely, the lack of TSP-4 led to increased ECM production and developmental heart enlargement [65]. As such, it is important to study the modular structures and binding interactions, and the temporal, spatial, and quantitative expression differences of various ECM proteins and their collaborations in cardiovascular health and diseases.

3. ECM in the Programming of Cardiovascular Repair

The adult heart has limited recovery and repair potential, and the loss of myocardial cells due to injury may end in heart disease and death. The cellular biological progression and restraining mechanisms associated with heart development and advancement can repair damaged adult hearts through the "stiring" pathway, which can determine the bioactivity during the entire embryogenesis. Incitement of the differentiation and proliferation of cardiomyocytes, by initiating the mitotic signaling pathway engaged with embryonic heart growth, points to a correlative methodology for heart recovery and repair [72]. Cardiac damage includes arterial sclerosis, myocardial infarction (MI), and ischemic and non-ischemic heart injury, which induces repair by the embryonic cell. Cells reply to the ECM by transforming their microenvironment, which becomes dysregulated in tube-shaped structural diseases, such as high blood pressure, restenosis, and arterial sclerosis [73].

After MI, the ECM dynamic alteration and remodeling propels inflammation and repair [74][75]. The first generation of bioactive matrix fragments activates an unhealthy signal. An extremely plastic tentative matrix formation facilitates blood corpuscle infiltration and activates infarction myofibroblasts [76]. The deposition of matrix cellular macromolecules modulates growth factor signal transduction, and promotes the spatial and temporal regulation of the repair [77]. Temporal scales vary from conformational changes in control of the particle channel gap, to fibrillation over seconds, and end in death. Spatial scales vary from metric linear unit pore sizes in membrane channels and gap junctions, to the meter length scale of the whole cardiovascular system throughout a living patient. Overwhelming changes in the ECM composition are conducive to the pathologic process of cardiac remodeling (Figure 2). 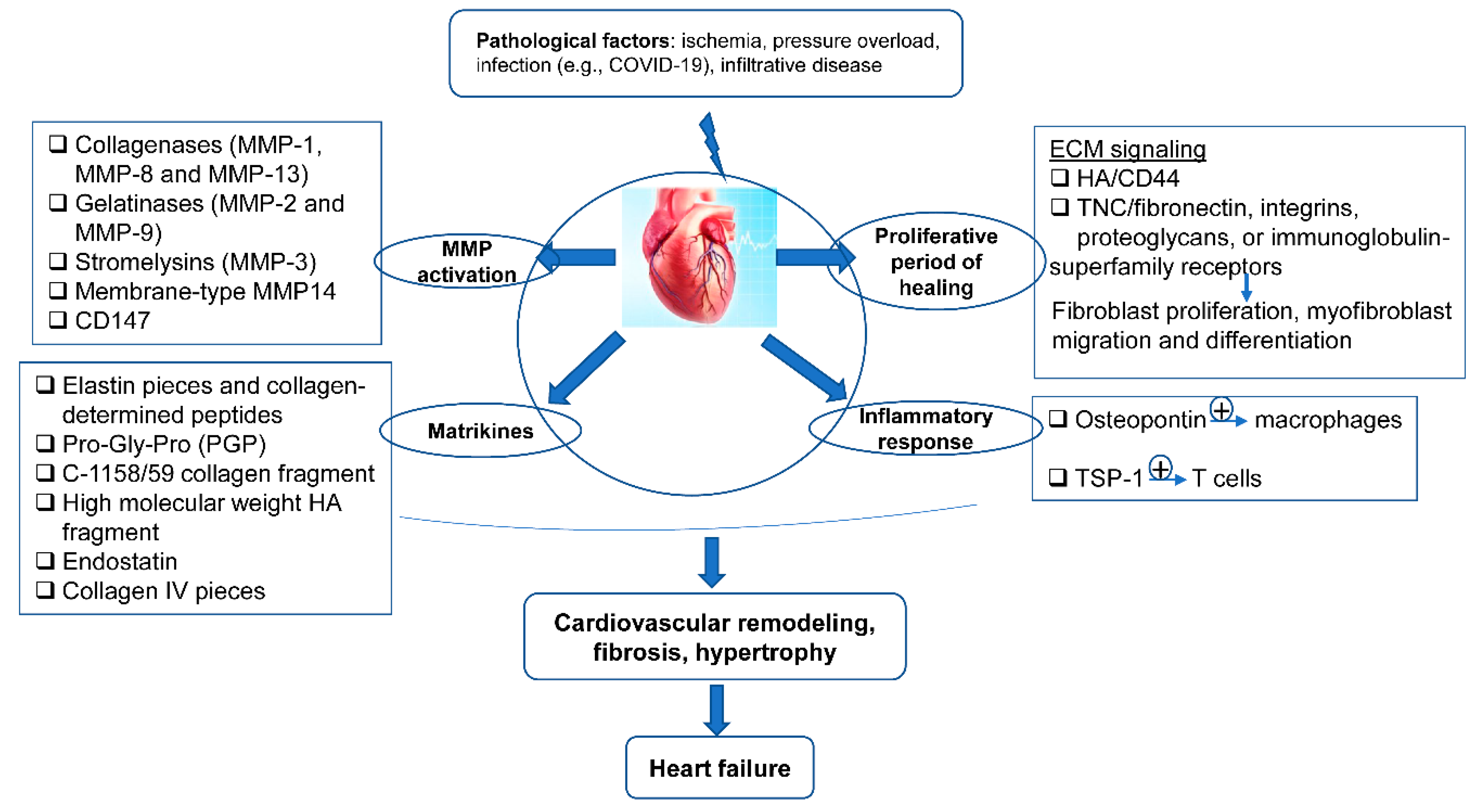 4. Epigenetic Regulation of ECM in Heart

Emerging research areas in the ECM field include epigenetic control of gene expression of ECM proteins, or indirectly, by modulating the expression of genes that regulate the synthesis or the degradation of ECM molecules in development and disease onset. Epigenetic changes characterized by RNA and DNA methylation, non-coding RNAs-intervened quality guidelines, and histone adjustments, have been seen in cardiovascular dysfunction and heart recovery (Figure 3), yet the components are indistinct. Knowledge of these aspects will deepen our understanding of ECM regulatory roles in cardiac health and disease, and inform new pharmacological agents targeting ECM-related cardiovascular diseases.

The ECM is a crucial element of the heart. Regulation of ECM structural integrity influences the viscus structure and performance. The strict regulation of temporal and spatial expression, and the proteolytic processing of ECM elements by extracellular proteases are crucial for the development of traditional internal organs. ECM pathological transformation is commonly related to viscus pathology alternative adverse outcomes, while the physiological turnover of ECM is beneficial for the process of tissue regeneration and repair.

Imperfect development in the womb is related to the tendency for cardiovascular disease in adulthood, an idea named "developmental origins of health and disease". More and more evidence supports the association of epigenetic guidelines with the underlying mechanism. Epigenetic systems, for example, RNA and DNA methylation, histone adjustments, and non-coding RNAs, give a degree of quality guidelines without modifying DNA arrangements. These changes are moderately steady signals, offering possible knowledge into the instrument's fundamental formative starting points of wellbeing and ailment. Therefore, it is imperative to understand the underlying mechanisms of ECM regulation that control cardiovascular development. Understanding the developmental mechanisms of ECM regulation could contribute to developing therapeutic strategies for cardiovascular disease.

More
© Text is available under the terms and conditions of the Creative Commons Attribution (CC BY) license; additional terms may apply. By using this site, you agree to the Terms and Conditions and Privacy Policy.
Upload a video for this entry
Information
Subjects: Pathology
Contributor MDPI registered users' name will be linked to their SciProfiles pages. To register with us, please refer to https://encyclopedia.pub/register :
RUI SONG
View Times: 457
Revisions: 2 times (View History)
Update Time: 19 Dec 2020
Table of Contents
1000/1000
Hot Most Recent