Submitted Successfully!
Thank you for your contribution! You can also upload a video entry related to this topic through the link below:
https://encyclopedia.pub/user/video_add?id=3651
Check Note
2000/2000
Microbial Cell-Cell Chemical Communication Systems
Edit
Upload a video
This entry is adapted from 10.3390/antibiotics9110779

The microbial cell–cell chemical communication systems include QS and host–pathogen communication systems. In 1994, Fuqua et al., coined the term of “quorum sensing” to describe an environmental sensing system that monitors the population density to coordinate the social behaviors of microorganisms. QS regulatory systems are characterized by the fact that microorganisms produce and release to the surrounding environment a diffffusible autoinducer or QS signal, which accumulates along with bacterial growth and induces target gene transcriptional expression when reaching a threshold concentration. Typically, a QS system contains a signal synthase, which produces QS signals, and a signal receptor that detect and response to QS signal in a population-dependent manner. In addition, microbial pathogens can also exploit the chemical molecules produced by host organisms as cross-kingdom signals to regulate virulence gene expression.

The AHL-mediated QS system is one of the most studied cell-to-cell communication systems, with over 200 bacterial species known to produce AHL family signals. Different bacterial species produce similar AHL signaling molecules with a conserved N-acyl homoserine lactone, but the fatty acid side chain lengths and substituents are in general variable, which may account for their signaling specificity in different microorganisms [1]. A wide range of microbial biological functions are known to be regulated by the AHL QS system, including bioluminescence, plasmid DNA transfer, production of pathogenic factors, biofilm formation, and antibiotic production [2]. The core of the AHL QS system consists of the AHL synthase (LuxI homologue) and the AHL signal receptor (LuxR homologue). In the bioluminescent bacterium A. fischeri, where the AHL QS system was first identified, at low cell density, the LuxI protein produces a basal level of few diffusible AHL molecules, and little bioluminescence could be detected. In contrast, with an increase in bacterial population density, the AHL signal molecules that accumulated around the bacterial cells enter the cell and bind and activate the LuxR protein, which then initiates LuxI overexpression and activates transcription of luminescence genes [3]. The generic mechanism of AHL-mediated QS is illustrated in Figure 1. 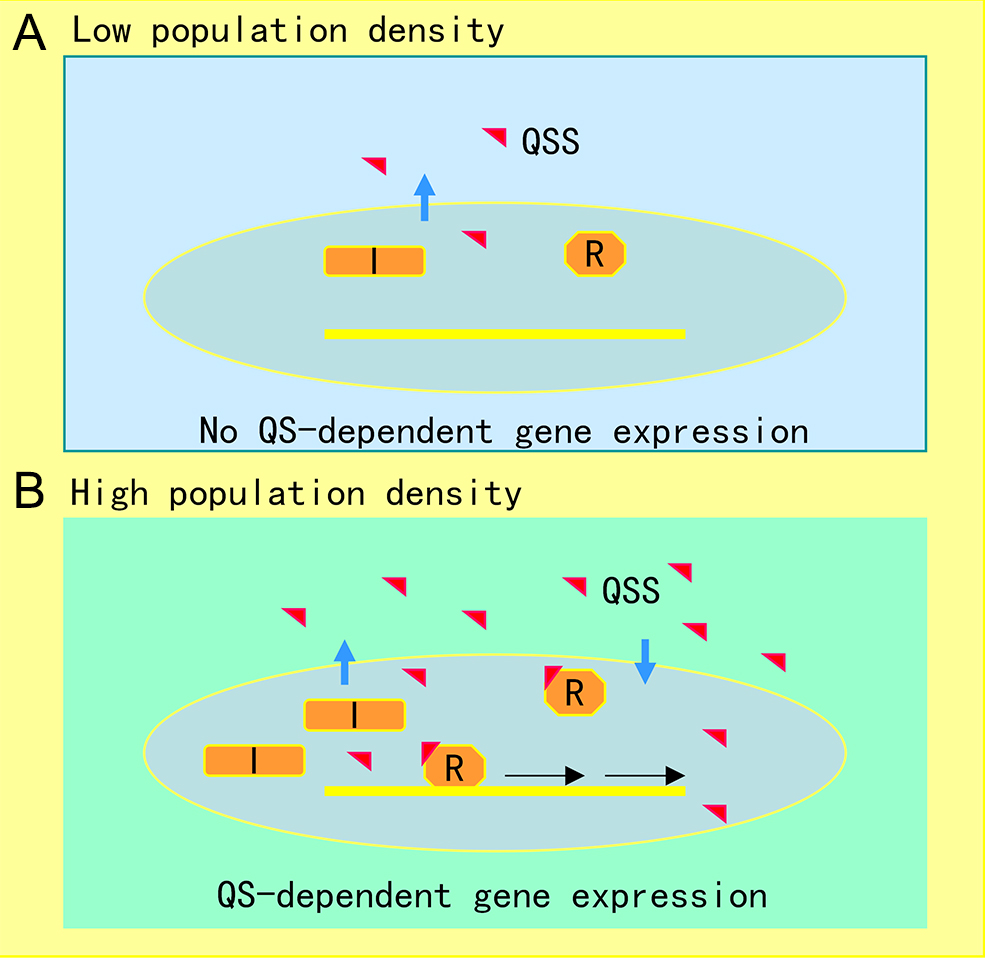 DSF represents another class of QS systems that are widespread in Gram-negative bacteria. In 1997, the Daniels Laboratory in the UK discovered that plant pathogen Xanthomonas campestris pv.campesitris (Xcc) could produce a diffusible signaling factor (DSF) and regulate production of a number of virulence factors, including proteases, cellulases and extracellular polysaccharides [4][5]. A subsequent study showed that three genes are associated with the DSF QS system, in which the rpfF gene may encode a DSF synthase, and the products of rpfC and rpfG genes could be involved in DSF signaling [5]. In 2004, Wang et al. isolated and identified DSF as cis-11-methyl-2-dodecenoic acid [6]. To date, more than 10 structurally similar DSF family signals have been isolated and identified from Gram-negative bacteria, and over 100 bacterial species were predicted to use DSF to regulate various biological functions [7][8]. The biological functions and signaling mechanisms of the DSF systems have been well studied in Xcc and Burkholderia cenocepacia [9][10]. In Xcc, response to DSF signals leads to activation of the protein kinase RpfC by self-phosphorylation, which activates the phosphodiesterase activity of its cognate response regulator RpfG through phosphorelay; the activated RpfG degrades c-di-GMP molecules and activates the global regulator Clp; Clp directly regulates the transcription of a number of pathogenic genes and indirectly regulates the expression of other pathogenic genes through the downstream transcription factors FhrR and Zur [9]. In B. cenocepacia, another DSF family signal, cis-2-dodecenoic acid (BDSF), binds to its major receptor RpfR to reduce the intracellular c-di-GMP to a sufficient level, which stimulate the RpfR-GtrR protein complex to bind to the promoter region of target DNA, thus modulating the production of virulence factors and biofilm mass [11][12][13].

Spermidine (Spd), spermine (Spm), and putrescine (Put) represent a widespread group of cationic aliphatic compounds with multiple biological activities in living cells, collectively referred to as polyamines. In recent years, increasing evidence indicates that polyamines are capable of performing regulatory functions as signals in intraspecies cell–cell communication or are involved in host–pathogen trans-kingdom cell-cell communication [14][15]. The precursors for synthesis of Put, Spd and Spm in bacterial cells are l-arginine, l-ornithine and l-methionine, respectively [16]. l-arginine decarboxylase decarboxylates arginine to produce adamantane, which is then converted to Put and urea by agmatine ureohydrolase. l-ornithine is decarboxylated by ornithine decarboxylase (ODC) to produce Put, then Put undergoes a transfer reaction with a propylamine group by the action of arginine synthetase to produce Spd, and then undergoes another transfer reaction with a propylamine group by the action of Spm synthetase to produce Spm [17]. l-methionine is catalyzed by l-methionine adenosyltransferase to produce S-adenosylmethionine (SAM), which is then decarboxylated by S-adenosylmethionine decarboxylase (SAMDC) to produce S-adenosylmethionine (dcSAM), which provides the propylamine group for the synthesis of Spd and Spm [17]. In bacteria, polyamines are mainly involved in the regulation of important physiological processes such as transcription and translation of bacterial virulence factors, biofilm formation, antibiotic resistance, acidic and oxidative stresses [16][18].

More
© Text is available under the terms and conditions of the Creative Commons Attribution (CC BY) license; additional terms may apply. By using this site, you agree to the Terms and Conditions and Privacy Policy.
Upload a video for this entry
Information
Subjects: Microbiology
Contributor MDPI registered users' name will be linked to their SciProfiles pages. To register with us, please refer to https://encyclopedia.pub/register :
YUFAN CHEN
View Times: 247
Revisions: 3 times (View History)
Update Time: 18 Dec 2020
Table of Contents
1000/1000
Hot Most Recent