Submitted Successfully!
Thank you for your contribution! You can also upload a video entry related to this topic through the link below:
https://encyclopedia.pub/user/video_add?id=3647
Check Note
2000/2000
Chemotherapy-Induced Ovarian Toxicity
Edit
Upload a video
This entry is adapted from 10.3390/ijms21207792

This review focused on current challenges and future directions on the treatment and prevention of ovarian failure or infertility by chemotherapy in young reproductive women with cancer. We also address current knowledge on chemotherapy-induced ovarian toxicity and its mechanisms. We hope this review will help clinicians to prevent and treat girls and young women with cancer who desire to preserve their ovarian endocrine function and fertility.

Cancer incidence is rapidly growing worldwide. In 2018, 8.6 million women were diagnosed with cancer globally [1]. Most women diagnosed with cancer are older, but 10% are <45 years of age [2]. Due to advances in cancer diagnosis and treatment, the survival rate for prepubertal and young women with cancer has significantly improved. In Europe, the five-year-survival rate is 79.1% in children diagnosed with cancer [3]. However, aggressive chemotherapy can cause impairment of reproductive functions and even fertility loss [4][5][6][7]. Although depletion of ovarian function is associated with improved survival outcomes in breast cancer patients of reproductive age, it has several side effects, such as hot flashes, osteoporosis, and sexual dysfunction [8]. Cardiovascular disease is the main cause of shortened life expectancy in women with premature ovarian insufficiency (POI) [9]. Moreover, chemotherapy-related POI and infertility may be associated with increased risk of neuro-degenerating disease and psychosocial distress [9].

2. The Effect of Chemotherapy on Ovarian Function

2.1. Risk of Ovarian Toxicity Due to Chemotherapy Agents

Figure 1 and Table 1 show the most common cancers and the risk of chemotherapy-induced ovarian toxicity in women according to chemotherapy protocol and age [3][20][21]. Notice that the course of chemotherapy and its related risks of gonadotoxicity can be unpredictable and variable due to treatment response and disease prognosis, i.e., refractory or recurrent cases [13][22]. In order to prevent POI due to chemotherapy and subsequent complications, effective and comprehensive oncofertility strategies should be undertaken to preserve fertility in young reproductive age women before initiation of cancer treatment [17][23][24][25][26].

Figure 1. The most commonly diagnosed cancer types in females by age worldwide (2018) [27].

Table 1. Common malignancies occurring in prepubertal girls and women at reproductive age and the risk of chemotherapy-induced gonadotoxicity.

Gonadotoxic chemotherapy leads to primordial follicle loss, resulting in POI and infertility. Both direct acute and indirect delayed mechanisms have been reported for the effects of anticancer agents that cause a decrease in ovarian reserve. The main mechanism is that anticancer drugs directly induce DNA double-strand breaks (DSBs), which activate apoptosis and/or autophagy-related pathways [36][37][38][39][40][41][42]. The second mechanism is that anticancer drugs can indirectly cause primordial follicle depletion by microvascular and stromal injury through ischemia, necrosis, or inflammation [38][42][43][44][45]. There is third hypothesis called the “burnout” effect. A few studies have shown that anticancer drugs induce activation of the phosphoinositide 3-kinase/protein kinase B/forkhead box protein O3a (PI3K/AKT/FOXO3a) pathway, which leads to follicle reduction by massive activation of primordial follicles in mice and cultured human ovarian tissue [36][46][47][48][49]. However, there is some question of methodology and biological mechanism of follicle loss based on studies supporting “burnout theory”. It has not been proven that primordial follicle growth is the main cause of chemotherapy-induced primordial follicle loss. Thus, the “burnout” theory of chemotherapy-induced follicle depletion is still lacking evidence and is under debate [36][46]. The main cause of the follicle depletion induced by chemotherapy seems to be DNA double-strand breaks and apoptosis.

Preserving fertility is important to most young cancer survivors. One study reported that more than half (51.7%) of young women undergoing cancer treatment felt that having children was the “most important” issue in their life [50]. The fear of treatment-related infertility may affect patients’ decision making in choosing cancer treatment among those who want to conceive their own genetic offspring [51][52]. Therefore, according to the ASCO, clinicians should refer cancer patients who are undecided or uncertain about their fertility intentions to a reproductive specialist for a fertility preservation consultation before initiating cancer treatment [53][54]. Established in 2007, the Oncofertility Consortium (OC) is a nationwide network of oncologists, reproductive specialists, and research scientists for fertility preservation in young cancer patients [55]. The National Physicians Cooperative, formed by the OC to share knowledge and resources, comprises 60 centers across the United States that provide oncofertility services to women [56]. In Japan, after establishment of the Japan Society for Fertility Preservation (JSFP) in 2012, there are 46 current medical institutions for preserving fertility. In Europe, the FertiPROTEKT network was founded in May 2006, and has included approximately 100 centers from Germany, Austria, and Switzerland since January 2014 [55].

Despite the increasing interest in and the advance of technologies available in the oncofertility field, accessibility to fertility preservation remains relatively low for young cancer patients, particularly those in low- and middle-income countries [57][58]. In a retrospective cohort study of women aged 18–42 years diagnosed with cancer, 20.6% received fertility preservation care [57]. In another study, only 9% of patients received any information on fertility preservation options [59].

Major barriers are lack of awareness among oncologists, lack of referrals from oncologists, lack of interinstitutional networks, and lack of oncofertility specialists [20]. In addition, many oncologists fail to have fertility discussions with their cancer patients and, thus, fail to make timely referrals due to patients’ lack of awareness of treatment-related infertility, together with time pressures, financial costs, and conflicting priorities of physicians [60][61].

To provide fertility preservation strategies to prepubertal and young women with cancer, each medical institution should be properly equipped, and should have a highly skilled and experienced oncofertility team which consists of medical oncologists, gynecologists, reproductive biologists, oncologic surgeons, patient navigators, and research scientists [13]. When oncofertility care is not available in institutions that treat women with cancer, immediate referral of patients to specialized oncofertility centers is encouraged to assure a high standard of care. In addition, individualized fertility preservation options should be considered based on patient age, marital status, economic status of patients, cancer type, staging upon diagnosis, chemotherapy regimen, and urgency of chemotherapy treatment (Figure 2). 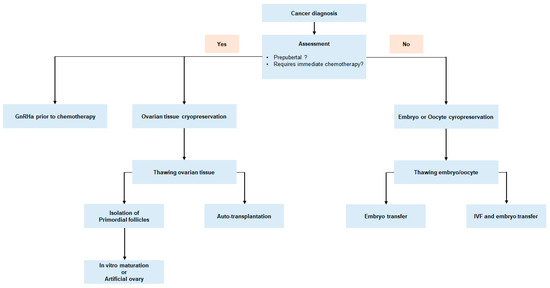 More
© Text is available under the terms and conditions of the Creative Commons Attribution (CC BY) license; additional terms may apply. By using this site, you agree to the Terms and Conditions and Privacy Policy.
Upload a video for this entry
Information
Subjects: Pathology
Contributor MDPI registered users' name will be linked to their SciProfiles pages. To register with us, please refer to https://encyclopedia.pub/register :
Sanghoon Lee
View Times: 118
Revisions: 2 times (View History)
Update Time: 18 Dec 2020
Table of Contents
1000/1000
Hot Most Recent