+1 point
Thank you for your contribution! You can also upload a video entry related to this topic through the link below: https://encyclopedia.pub/user/video_add?id=35924
Check Note
2000/2000
Friends of Science

Edit
Upload a video
The content is sourced from: https://handwiki.org/wiki/Organization:Friends_of_Science

Friends of Science (FoS) is a non-profit advocacy organization based in Calgary, Alberta, Canada. The organization rejects the established scientific conclusion that humans are largely responsible for the currently observed global warming. Rather, they propose that "the Sun is the main direct and indirect driver of climate change," not human activity. They argued against the Kyoto Protocol. The society was founded in 2002 and launched its website in October of that year. They are largely funded by the fossil fuel industry. Madhav Khandekar, Chris de Freitas, Tim Patterson and Sallie Baliunas act or acted as advisers to the Friends of Science with their work cited in Friends' publications. Douglas Leahey has been president since December, 2009.

The first board of directors in 2002 included oil industry geologist and member of the Canadian Society of Petroleum Geologists, Arthur M. Patterson,[5][6] as President; Gordon C. Wells, as Vice-President; Charles Simpson as Secretary and H. Graham Donoghue as Treasurer.[7] Founding members of the Friends of Science, Arthur M. Patterson, Albert Jacobs,[8] and David Barss (Hons. Geol. published the Canadian Society of Petroleum Geologists (CSPG) position on global climate change science in January 2003 in which they cite an article by Chris de Freitas entitled "Are Observed Changes in the Concentration of Carbon Dioxide in the Atmosphere Really Dangerous?"[9][10][11]

In 2002, as faculty member of the University of Calgary, political scientist Barry Cooper, set up the Science Education Fund which could accept donations through the Calgary Foundation. The 57-year-old charity, Calgary Foundation administers charitable giving in the Calgary area and had "a policy of guarding donors' identities." Albert Jacobs, a geologist and retired oil explorations manager, who attended the first meeting held in the curling lounge of Calgary's Glencoe Club back in 2002, described how donations from industry donors were passed on to the Science Education Fund set up by Barry Cooper, which in turn supported the activities of the Friends of Science.[12][13]

In 2004 Talisman Energy, a Calgary-based, global oil and gas exploration and production company, one of Canada's largest independent oil and gas companies, donated $175,000 [14] to fund a University of Calgary-based "public relations project designed to cast doubt on scientific evidence linking human activity to global warming." Journalist Mike De Souza published the list of significant donations to the Friends of Science which had been received by the press, in an article published in the Vancouver Sun in 2011. Sydney Kahanoff, a Calgary oil and gas executive and philanthropist donated $50,000 through his Kahanoff Foundation, a charity he established in 1979. Murphy Oil matched one of its employees $1,050 donations. Douglas Leahey defended the donations to the Friends of Science from the then CEO of Talisman Energy, James Buckee,[15][16] who shared the Friends' views on climate change.[17]

On their original web page, dated 2002, the Friends recommended several key documents explaining their standpoint, including testimonies by George C. Marshall Institute [18][19][20] former board members, Richard S. Lindzen and Sallie Baliunas. Richard S. Lindzen's testimony[21] before the Senate Environment and Public Works Committee on 2 May 2001. Lindzen, a former member of the UN's Intergovernmental Panel on Climate Change became one of the most well-known climate ”skeptic” scientists. A prolific writer, he has been criticizing the IPCC since the early 1990s.[22][23][24] Noted deniers Sallie Baliunas was also a paid consultant of the George C. Marshall Institute.[25]

The Friends' short recommended reading list also included the anti-Kyoto testimony[26] provided by Harvard-Smithsonian astrophysicist, Sallie Baliunas, well-known denier, to the Senate Committee on Environment and Public Works. Baliunas claimed that, "[p]roposals like the Kyoto agreement to sharply cut greenhouse gas emissions are estimated in most economic studies to have enormous economic, social and environmental costs. The cost estimates for the U.S. alone amount to $100 billion to $400 billion per year. Those costs would fall disproportionately on America's and the world's elderly and poor."[27] MacRae, an engineer, investment banker and environmentalist warned of economic fall-out and inaccurate science of the Kyoto accord.[28] The Friends recommended Wildavaky's 1995 publication in which he claimed that "an all-powerful environmental community" overstated risks in everyday life.[29]

Friends of Science publishes a list of "ten myths of climate change," each of which they disagree with:[32] 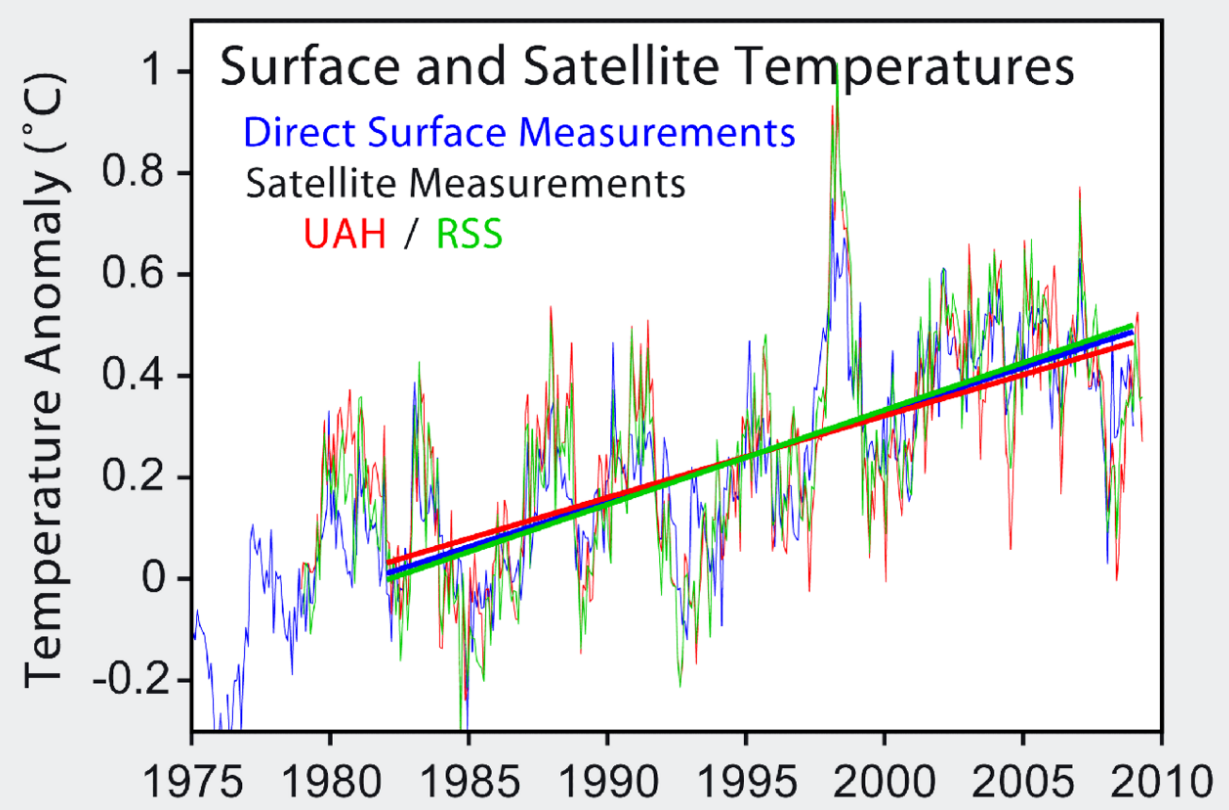 Comparison of ground based (blue) and satellite based (red: UAH; green: RSS) records of temperature variations since 1979. Trends plotted since January 1982. https://handwiki.org/wiki/index.php?curid=1900480

Friends of Science states that the satellite and balloon temperature records indicate no significant global warming has taken place over the last three decades.

Accurate satellite, balloon and mountain top observations made over the last three decades have not shown any significant change in the long term rate of increase in global temperatures. Average ground station readings do show a mild warming of 0.6 to 0.8 C over the last 100 years, which is well within the natural variations recorded in the last millennium. The ground station network suffers from an uneven distribution across the globe; the stations are preferentially located in growing urban and industrial areas ("heat islands"), which show substantially higher readings than adjacent rural areas ("land use effects").

In April 2005, Friends of Science released a 23-minute on-line video directed by Mike Visser, entitled "Climate Catastrophe Cancelled: What You're Not Being Told About the Science of Climate Change" that contrasts the views of politicians and scientists on the question of climate change.[36] The video featured consultant Tim Ball, Sallie L. Baliunas, geologist Tim Patterson of Carleton University, Ross McKitrick and political scientist Barry F. Cooper of the University of Calgary, all of whom are known for their rejection of the mainstream scientific view on global warming. A second edition was released 13 September 2007.

Madhav Khandekar,[37][38] Chris de Freitas, Tim Patterson, Sallie Baliunas and Douglas Leahey were among the 60 "accredited experts in climate and related scientific disciplines," signatories along with prominent members of The Heartland Institute,[39] to the letter sent to Prime Minister Stephen Harper calling on him to walk away from the Kyoto agreement,[40] which he eventually did. On 31 December 2011, Canada became the first signatory to announce its withdrawal from the Kyoto Protocol.[41]

The Friends of Science endorsed the Heartland Institute's 2008 Manhattan Declaration on Climate Change.[42] Some of the Friends, such as Madhav Khandekar, Chris de Freitas, Tim Patterson, Sallie Baliunas and Douglas Leahey, Tom Harris,[43] were present at the conference which took place in New York City at the Heartland Institute's 2008 International Conference on Climate Change in March 2008. Other Friends, like Timothy F. Ball, who were endorsers are climate science specialists or scientists in closely related fields.[44] Arthur M. Patterson was another Friend and endorser.

The Friends of Science are proponents of the Manhattan Declaration statements agreeing that "global Warming is not a global crisis" and arguing that "there is no convincing evidence that CO2 emissions from modern industrial activity has in the past, is now, or will in the future cause catastrophic climate change." The Manhattan Declaration calls for an end to "all taxes, regulations, and other interventions intended to reduce emissions of CO2."[42]

In 2013 in his opinion piece in the Financial Post Tom Harris described the climate symposium, "Earth climate: past, present, future" at the Geological Association of Canada, the Mineralogical Association of Canada (GAC-MAC) annual joint conference where Friends of Science presenters included Calgary geophysicist, independent oil and energy professional, Norm Kalmanovitch, a long-time member of Friends of Science.[38] Kalmanovitch argued that the greenhouse effect from greenhouse gas emissions has never existed to any measurable extent.[38] In a letter to the editor of the Calgary Herald dated 16 April 2015, Kalmanovitch claimed that in 1970, "the world was in the grips of a global cooling scare brought on by the 1942 reversion from global warming to global cooling, ending the 250-year recovery from the Little Ice Age and threatening its return. In 1975, the threat ended with the reversion to global warming, but returned with the reversion to global cooling in 2002 that is in place today." Kalmanovitch based his arguments on those of Jim Peden.[45]

In June 2014, the organization put up a billboard in Calgary stating that the sun is "the main driver of climate change." This provoked criticism from, among others, Greenpeace, whose request for their own advertisement to appear on an Alberta billboard had been denied by the same company that displayed Friends of Science's ad.[46]

In October 2005 Barry Cooper set up the Science Education Fund at the University of Calgary which was able to access funds from the Calgary Foundation.[47] Critics remark that Cooper established the Science Education Fund to "obscure the political and financial interests behind the donations, not only providing anonymity to donors but also a tax break for their contributions to science education."[48] Friends of Science has been "criticized for its close financial ties to the Alberta patch."[48] In 2010, in the section on "Donations" published in the Friends of Science's newsletter in 2010, Chuck Simpson, the Past Director of Friends of Science called for fund raising to help this "small group of volunteers" with administrative costs. One of their claimed problems is that they were unable to "attract money from corporations",[49][50] although their antagonists claim the Friends of Science are funded by the petroleum industry[49] and close links to the oil and gas industry.[51] In April 2007, The Friends of Science newsletter claimed their "efforts to bring balance to the climate change debate are being restricted because of our lack of funding. We have mostly relied upon the good nature of our members, with some contributions from Charitable Foundations. There has also been some funding from 'big oil', but they seldom smile on us. They appear to believe that marketing is more important than historical climate information."[52]

More
©Text is available under the terms and conditions of the Creative Commons-Attribution ShareAlike (CC BY-SA) license; additional terms may apply. By using this site, you agree to the Terms and Conditions and Privacy Policy.
Upload a video for this entry
Information
Subjects: Environmental Sciences
Contributor MDPI registered users' name will be linked to their SciProfiles pages. To register with us, please refer to https://encyclopedia.pub/register :
HandWiki
View Times: 6
Entry Collection: HandWiki
Revision: 1 time (View History)
Update Time: 23 Nov 2022
Table of Contents
1000/1000
Hot Most Recent