Submitted Successfully!
Thank you for your contribution! You can also upload a video entry related to this topic through the link below:
https://encyclopedia.pub/user/video_add?id=3564
Check Note
2000/2000
Synthetic methods of phosphonopeptides
Edit
Upload a video
This entry is adapted from 10.3390/molecules25245894

Phosphonylation of amino/peptide esters with alkyl N-protected aminoalkylphosphonochloridates is a general and widely applied method for the synthesis of phosphonopeptides containing a phosphonamidate bond. The phosphonochloridates are usually prepared via chlorination of the corresponding dialkyl phosphonates with phosphorus pentachloride [20] or phosphorus oxychloride [21], chlorination of phosphonic monoesters with thionyl chloride [22][23] or oxalyl chloride [24][25], and chlorination of alkyl trimethylsilyl phosphonates [26] or alkyl phosphinates [27] with carbon tetrachloride. Phosphonobromidates are seldom applied as intermediates in the synthesis of phosphonopeptides and generated via bromination of alkyl phosphinates with bromine [28]. Each of the above-mentioned methods will be presented as following.

After aminomethylphosphonic acid was isolated from numerous organisms and animal and human organs [29][30], to understand the biological significance of this new class of compounds, phosphonodipeptide was synthesized in 1973. Diisopropyl N-phthalyl(Phth)aminomethylphosphonate was prepared from phthalylaminomethyl chloride and triisopropyl phosphite and further treated with phosphorus pentachloride to give the corresponding isopropyl N-phthalylaminomethylphosphonochloridate, which reacted with ethyl glycinate in the presence of triethylamine to give rise to protected phosphonopeptide (Scheme 1). This is the first chemical synthesis of α-phosphonopeptide with a phosphonamidate linkage. 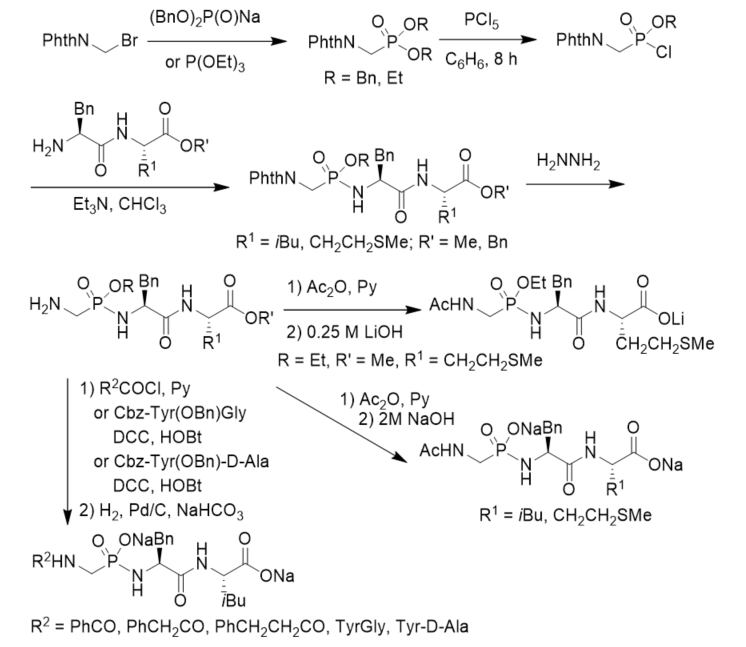 Scheme 2. Synthesis of phosphonopeptides as inhibitors of enkephalinase and angiotensin-converting enzyme.

Scheme 3. Synthesis of phosphonopeptide from phosphonochloridate generated by chlorination of diethyl phosphonate with phosphorus oxychloride.

To search for competitive inhibitors of d-alanine:d-alanine ligase, phosphonodipeptide was prepared from methyl alaninate and N-Cbz-protected methyl 1-aminoethylphosphonochloridate, which was prepared from N-Cbz-protected diphenyl 1-aminoethylphosphonate via transesterification, selective hydrolysis, and chlorination with thionyl chloride (Scheme 4). The phosphonodipeptide was the competitive inhibitor of d-alanine:d-alanine ligase, with Ki close to 10−6 M [22].

Scheme 4. Synthesis of phosphonopeptide as the inhibitor of d-alanine:d-alanine ligase.

Some α-phosphonodipeptides which simulated the transition state of d-alanyl-d-alanine synthetase (EC 6.3.2.4) reaction were synthesized (Scheme 5). The inhibition of the synthetase by these phosphonopeptides was studied with the S. faecalis enzyme. The phosphonopeptides exhibited time-dependent inhibition in the presence of ATP, suggesting that they underwent phosphorylation prior to inactivating the enzyme [23]. 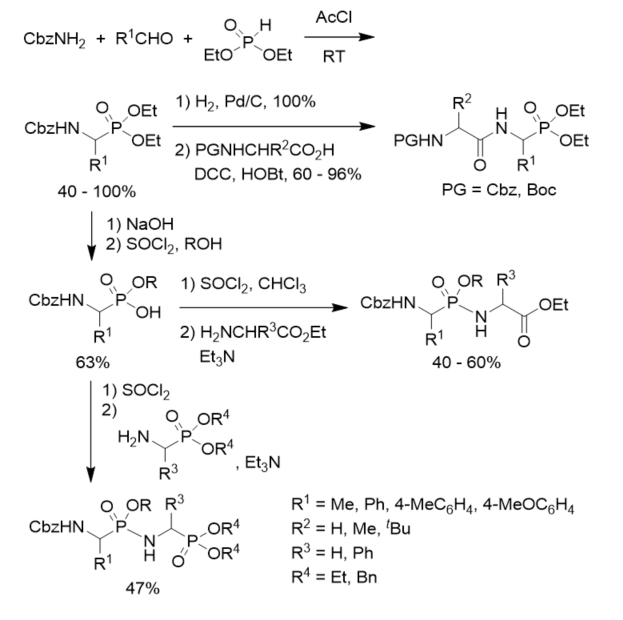 To prepare novel inhibitors of VanX, a Zn(II) metalloenzyme that was required for high-level vancomycin resistance in bacteria, N-[(1-aminoethyl)hydroxyphosphinyl]-d-alanine was synthesized via coupling of N-Cbz protected methyl 1-aminoethylphosphonochloridate with methyl d-alaninate followed by basic hydrolysis and hydrogenolysis (Scheme 7). Bioassay results indicated that phosphonodipeptide was shown to be a partial competitive inhibitor of VanX with a Ki of 36 μM [32].

Phosphonopeptides CbzNHCH2P(O)(OEt)-l-ProOBn, CbzNHCH2P(O)(OEt)-d-Pro, CbzNHCH2P(O)(OEt)-l-thioProOMe, and H2NCH2P(O)(OEt)-l-Pro were prepared following similar method for investigation on the relative catalytic efficiency of β-lactamase catalyzed acyl and phosphyl transfer [33]. O-Phenyl phosphonamidates have been designed to bind covalently by nucleophilic substitution to the serine residue in the active site of serine proteases. Phosphonodipeptide with O-phenyl on the phosphorus atom was synthesized from phenyl N-Cbz 1-amino(phenyl)methylphosphonochloridate and methyl l-valinate. The stability of the phosphonamidates as a model of phosphonopeptides in aqueous solutions and their selectivity in the reaction against alcohols vs. thiols proved that they constituted a class of potential inhibitors of serine proteases and valuable tools to study the mechanism of inhibition. The transesterification of the phosphonopeptide phenyl ester with MeOH in the presence of Et3N/KF gave the corresponding phosphonopeptide methyl ester (Scheme 8) [34].

Scheme 8. Synthesis of phosphonopeptide and its transesterification.

By using similar synthetic method, this research group also prepared phosphonodipeptides as new inhibitors of leucine aminopeptidase [35] and investigated the influence of the nature of the N-terminal functional group on their hydrolysis [36].

Besides Cbz protecting group, Fmoc group was also used in the synthesis of phosphonopeptides. Benzyl hydrogen α-(9-fluorenylmethoxycarbonyl(Fmoc)amino)alkylphosphonates were obtained by the sodium metaperiodate oxidation of the corresponding phosphinates and converted to the phosphonochloridates, which were coupled with Nε-protected lysine benzyl ester to afford phosphonodipeptides containing a lysine residue (Scheme 9) [37].

Cramer and Klebe described a procedure for the synthesis and purification of functionalized phosphonopeptides that were able to generate inhibitors for the metalloprotease thermolysin for use in biophysiological experiments. The method utilized an allyl ester/allyloxycarbonyl(Aloc) protection strategy and showed advantage of a fast and effective solid-phase purification step. They first prepared diallyl N-Cbz aminomethylphosphonate and transformed it into allyl N-Cbz aminomethylphosphonochloridate, which was further reacted with dipeptide allyl esters or amino amide derivatives. After deprotection under the catalysis of Pd(PPh3)4 followed by treatment with LiOH, phosphonopeptide lithium salts were obtained (Scheme 10). By using the strategy, they synthesized a series of highly polar phosphonopeptide inhibitors with amino- and hydroxy-functionalized side chains in excellent purity [38]. 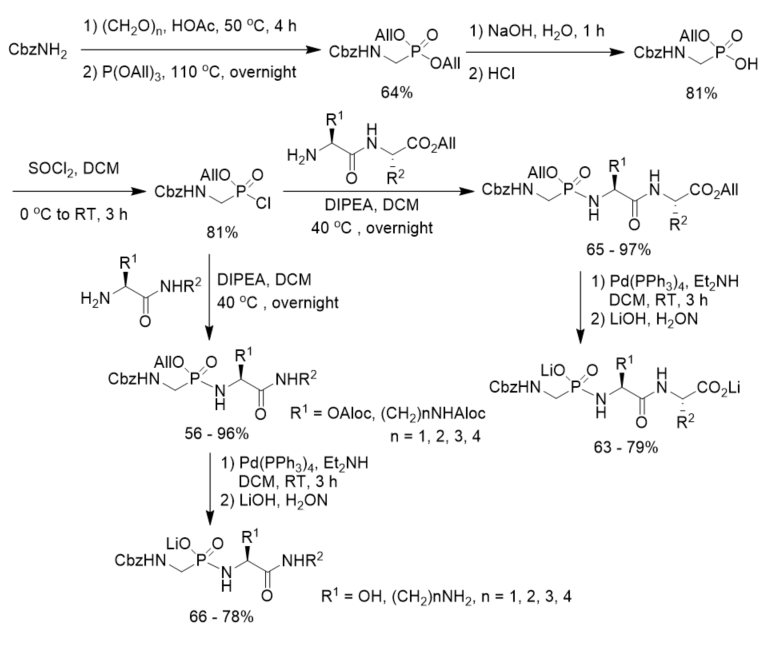 To search for effective and stable inhibitors of cytosolic leucine aminopeptidase, a β-phosphonopeptide containing aromatic N-terminal amino group was designed and synthesized. Diethyl 2-nitrophenylphosphonate was prepared and converted to the corresponding phosphonochloridate, which was coupled with methyl glycinate hydrochloride followed by reduction and basic hydrolysis, affording β-phosphonopeptide. The decrease in basicity of the terminal amino moiety of the β-phosphonopeptide resulted in satisfactory improvement of hydrolytic stability of the P-N bond. However, it did not exhibit inhibition activity up to millimolar concentration in enzymic assays towards leucine aminopeptidase possibly because diminishing the basic character of the terminal amino group resulted in a change of its affinity towards the zinc ions in the aminopeptidase. On the other hand, the decrease of the inhibition activity might also be ascribed to the steric constrain induced by the planar phenyl ring (Scheme 11) [39].

Moroder’s research group tested different chlorination conditions and found that oxalyl chloride-mediated preparation of phosphonochloridates allowed the improvement of the synthesis of phosphonopeptides, in comparison with thionyl chloride. A catalytic amount of N,N-dimethylformamide (DMF) promoted the chloridation. Particularly if AgCN was used as catalyst or upon conversion of the corresponding phosphonochloridates into their 7-aza-1-hydroxybenzotriazole (HOAt) ester, the yields of phosphonopeptides even reached 90% (Scheme 12). When peptide hydrochlorides were utilized as amino components triethylamine or diisoproylethylamine was added as base. However, triphosgene was an inefficient chloridating reagent. Furthermore, the Mukaiyama procedure failed completely in the present case. The mixed anhydrides of aminoalkylphosphonic acid monoesters with pivaloyl chloride generated, but affording exclusively to the N-pivaloylpeptide derivatives instead phosphonopeptides, despite the steric bulk of the tert-butyl group. New muramyl dipeptide (MDP) analogs related to LK 423 as potential immunomodulators was synthesized by coupling of methyl N-Fmoc 1-aminoethylphosphonochloridate and dibenzyl d-glutamate toluenesulfonate, followed by basic deprotection and coupling with 5-phthalimidopentanoic acid. The dipeptide part of the lead compound was modified by introducing a phosphonamidate bond instead of the amide bond between l-alanine and d-glutamic acid (Scheme 13) [25].

The synthesis of different muramyl dipeptide analogue LK 415 derivatives as potential immunomodulators was reported. The d-alanine and d-isoglutamine of LK 415 were replaced by their phosphonic analogues l,d-phosphonoalanine [H2NCHMeP(O)(OMe)2] and H2NCH[CH2CH2P(O)(OEt)2]COCH2Ph, yielding the LK 415 analogues N-[2-[2-[(1-adamantylcarbonyl)amino]ethoxy]acetyl]-NHCHMeP(O)(OMe)-d-Glu(OEt)2 and N-[2-[2-[(1-adamantylcarbonyl)amino]ethoxy]acetyl]-l-Ala-NHCH[CH2CH2P(O)(OEt)2]COCH2Ph, respectively [41].

To prepare phosphorus analogues of γ-glutamyl peptide, N-Cbz l-glutamic acid was first transformed to the corresponding dimethyl phosphonate. After aminolysis and chlorination it was transformed to the corresponding phosphonochloridate, which was reacted with diethyl glutamate, affording γ-phosphonodipeptide in 64% yield. After hydrogenolysis, N-terminal free γ-phosphonopeptide was obtained in 87% yield. However, the coupling of the phosphonochloridate with diethyl 2-hydroxyglutarate generated γ-phosphonodepsipeptide in only 6.7% yield, indicating the strategy was not suitable for the synthesis of γ-phosphonodepsipeptide (Scheme 14)[42].

To minimize the side reactions (formation of oxazaphospholines) of N-Cbz protected 1-aminoalkylphosphonochloridates, a convenient method for the synthesis of phosphonopeptides was described. N-Cbz protected 2-aminoalkylphosphinates were converted to their trimethylsilyl phosphonite tautomers with the treatment with bis(trimethylsilyl)acetamide. They were oxidized with CCl4 to generate the corresponding phosphonochloridates as intermediates, which reacted with amino acid esters to give rise to the desired phosphonopeptides. The oxidative activation was carried out in the presence of the amine nucleophiles so that stoichiometric formation of the phosphonochloridates were avoided and side reactions were minimized (Scheme 15) [26]. 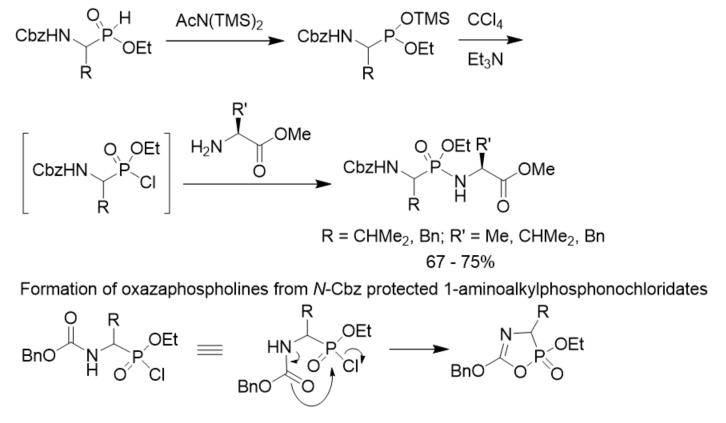 2.6. Bromination of Alkyl Phosphinates with Bromine

Yao and Yuan developed a general and efficient one-pot procedure for converting 1,1-diethoxyalkylphosphinates into phosphonates or phosphonamides by the use of bromine. For α-aminoalkylphosphinates, the transformation could be realized without the protection of the amino group. Enantiopure phosphinate reacted stereospecifically with bromine and subsequently couples with nucleophile to generate the corresponding optically active derivatives with retention of configuration at the phosphorus center (Scheme 17) [28]. The developed method was applied in the synthesis of phosphonopeptides. 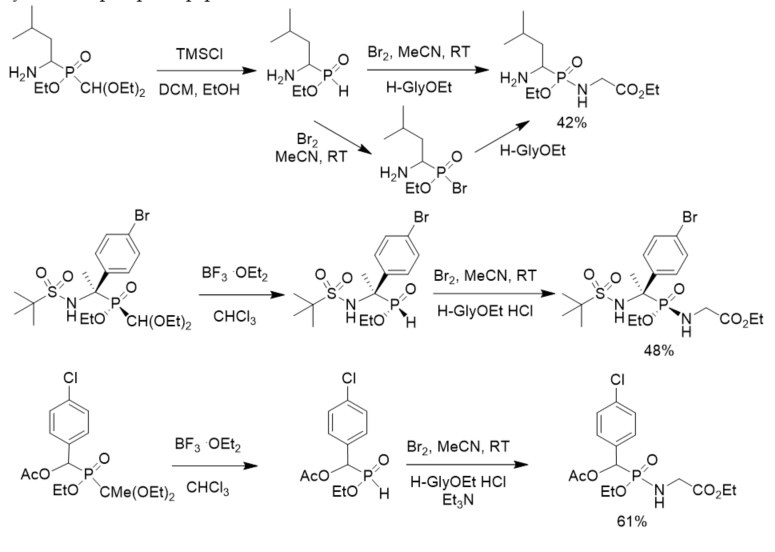 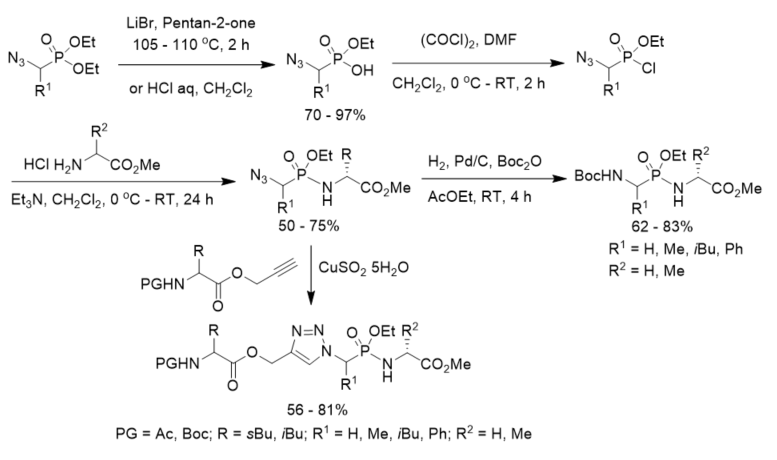 More
© Text is available under the terms and conditions of the Creative Commons Attribution (CC BY) license; additional terms may apply. By using this site, you agree to the Terms and Conditions and Privacy Policy.
Upload a video for this entry
Information
Subjects: Chemistry, Organic
Contributor MDPI registered users' name will be linked to their SciProfiles pages. To register with us, please refer to https://encyclopedia.pub/register :
Jiaxi Xu
View Times: 384
Entry Collection: Organic Synthesis
Revisions: 3 times (View History)
Update Time: 16 Dec 2020
Table of Contents
1000/1000
Hot Most Recent