Submitted Successfully!
Thank you for your contribution! You can also upload a video entry related to this topic through the link below:
https://encyclopedia.pub/user/video_add?id=3385
Check Note
2000/2000
Quantitative Epigenetics
Edit
Upload a video
This entry is adapted from 10.3390/epigenomes4040025

EpiRILs are referred to as the recombinant inbred lines that differ for DNA methylation patterns and show no genetic variation. EpiRILs represent an excellent resource to identify the effect of DNA-methylation on phenotypes[12]. Under changing climatic conditions, epigenetic modifications could play a crucial role in plant adaptation to environmental stresses[13]. epiRILs developed in Arabidopsis have been used to explore the effect of environmental factors, which revealed that stress-induced epigenetic modifications could be heritable and provide phenotypic plasticity to plants to endure stress[14].

In Arabidopsis, at least two different epi-RIL populations have been developed[12][15]. One epi-RIL population was derived from the crossing of met1 mutant and its isogenic wild type[15]. The met1 mutant is defective in DNA methyltransferase[8][16]. In the F2 and subsequent generations, only wild type MET1 alleles were selected in order to prevent de novo DNA methylations. In each generation, progenies were advanced using the single seed descent method. Similarly, another epi-RIL population was derived from the crossing of ddm mutant and its isogenic wild type[12]. The ddm mutant is defective in the DDM locus that encodes nucleosome-remodeling ATPase required  to maintain C methylation [17][18]. Due to the utilization of isogenic lines in crossing, these epiRILs have no genetic variations; however, epigenetic variations are maximum. Schematic representation of the development of epiRILs is given in Figure 1. The following points need to be considered while studying transgenerational epigenetic variations. 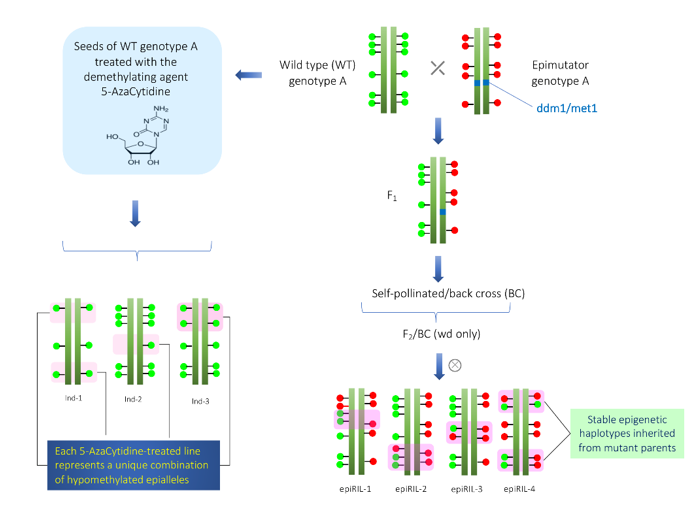 Figure 1. Construction of epiRILs (hypomethylated population) for quantitative epigenetics. In the left side, the scheme for the construction of hypomethylated population using demethylating agent 5-AzaCytidine is shown. On the right side, scheme for construction of epiRILs with stable inheritance by crossing of two parents (wild-type and epimutator parents (met1 or ddm1)) with different epigenetic states is shown. The green and red circles that overlay the genome sequence illustrates the different epigenetic states of the two parents.

2.1. Persistence of Epigenetic Modification in the epiRILs

Epigenetic modifications are heritable and maintained across several generations as revealed from epiRILs developed by the crossing of mutants (met1 or ddm1) with its isogenic wild types[19][20]. In the ddm epiRILs, epigenetic loci targeted by small RNAs were extensively remethylated, while nontargeted loci remained unmethylated[21]. In contrast, Flowering Wageningen (FWA) epiallele associated with flowering time became methylated in the subsequent generations despite being targeted by small RNA[12][15]. The mechanism underlying remethylation process and the role of small RNAs in remethylation  remain unclear. However, a recent study provides mechanistic insights on the formation and transmission of epialleles and suggested that histone and DNA methylation marks are critical in determining the ability of RdDM target loci to form stable epialleles[22]. High levels of active histone mark H3K4me3 at specific loci prevent recruitment of the RdDM machinery, whereas high levels of H3K18ac enable ROS1 (Repressor of Silencing 1) to access specific loci, therefore antagonizing RdDM-mediated re-establishment of DNA methylation.

2.2. Phenotypic Variation and Stability in the epiRILs

Continuous variations for different traits observed in the abovementioned two epi-RILs suggested that epigenetic modification was involved in the regulation of polygenic traits also. Although two epi-RILs differed for different traits. For instance, epiRILs derived from met1 mutant showed variation for biotic (bacterial pathogen) and abiotic stress (salt) tolerance [63]; however, in the case of epiRILs derived from ddm1 mutant, variation can be clearly seen for morphological traits like flowering time and plant height[12].

The stability of phenotypic characters in the above two epiRILs is quite different. Phenotypes in met1 derived epiRILs are very unstable, and several lines were unable to advance to F8 generation due to abnormal development and infertility [63]. Unlike, ddm1 derived epiRILs were found highly stable and more than 99% lines advanced to F8 generations without any abnormality [12].

Heterosis is a phenomenon where F1 hybrid shows enhanced phenotypes than their respective parents. Heterosis has extensively been exploited as a potential breeding strategy for crop improvement. The importance of heterosis, its application in plant breeding, and molecular mechanisms underlying heterosis have been discussed elsewhere[23][24][25][26]. Many genetic factors contribute to the heterotic phenotype; however, epigenetic interactions between two parental alleles also play a critical role in heterosis[27][28]. Hybrids of Arabidopsis derived from two genetically similar but epigenetically diverse ecotypes C24 and Ler showed more than 250% enhanced biomass over parents advocated the importance of epigenetics in heterosis[29]. Out of three different cytosine methylation contexts, the highest alteration was observed at CpG site; however, CpHpH and CpHpG methylations slightly increased in hybrids than parental genotypes[27]. Furthermore, 75% methylation changes were observed in TEs , and more than 95% methylation increase was observed in siRNA generating regions[27]. In Arabidopsis, hybrids derived from Col-wt (female parent) and 19 epiRILs (male parents) showed positive and negative heterosis for six growth-related traits. DNA methylation profiling of hybrids and parents identified epiQTLs associated with heterosis and suggested that DMRs present in the parental genotypes are responsible for heterosis[26]. The above results provide evidence that epigenetic

More
© Text is available under the terms and conditions of the Creative Commons Attribution (CC BY) license; additional terms may apply. By using this site, you agree to the Terms and Conditions and Privacy Policy.
Upload a video for this entry
Information
Subjects: Agriculture, Dairy & Animal Science
Contributors MDPI registered users' name will be linked to their SciProfiles pages. To register with us, please refer to https://encyclopedia.pub/register :
Vijay Gahlaut
,
Gaurav Zinta
View Times: 248
Revisions: 4 times (View History)
Update Time: 10 Dec 2020
Table of Contents
1000/1000
Hot Most Recent