Submitted Successfully!
Thank you for your contribution! You can also upload a video entry related to this topic through the link below:
https://encyclopedia.pub/user/video_add?id=3251
Check Note
2000/2000
Genus Ochrobactrum
Edit

Ochrobactrum spp. are found in a wide range of environments including soils and water. They are non-enteric, Gram-negative organisms that are closely related to the genus Brucella. Several species of this genus have now been characterised and implicated as opportunistic pathogens in multiple outbreaks. This entry gives a brief overview of the Genus Ochrobactrum.

Gram-negative, non-fermenting bacteria are an emergent worry in medical situations and are becoming a growing cause of severe infections. Pathogens of this type are opportunistic and include many different bacterial species, such as Ralstonia spp., Pseudomonas aeruginosa, Sphingomonas paucimobilis and Brevundimonas spp. [1][2][3][4][5]. Gram-negative, non-fermenting bacteria can infect both patients undergoing treatments and individuals outside of a clinical setting with various underlying conditions or diseases. Another type of these bacteria are the members of the α-proteobacterial genus Ochrobactrum [6].

Ochrobactrum spp. are found in a wide variety of environments including water, aircraft water, soil, plants and animals [6][7][8][9][10][11][12]. Several Ochrobactrum spp. have been investigated for their potential to degrade xenobiotic pollutants and for heavy metal detoxification under a variety of environmental conditions [13][14][15][16]. Ochrobactrum spp. are very closely related to brucellae, and even though they are considered to be of low virulence, they have increasingly been found to cause infections (some serious including endocarditis and septicaemia) in immunocompetent hosts [17][18].

The genus Ochrobactrum emerged from what was previously categorised as the CDC group VD1-2. The type species Ochrobactrum anthropi had previous been called Achromobacter VD based on the Special Bacteriology Section of the US Center for Disease Control [19]. Initial results indicate members of the group grew on MacConkey agar producing catalase, oxidase and urease; strains could be Gram-negative to variable [20]. However, the taxonomic position of Achromobacter became complicated and the name Achromobacter and related CDC group VD were no longer accepted by Bergeys Manual [19] leading to a new classification and the emergence of the genus Ochrobactrum [21]. Ochrobactrum spp. are phylogenetically related to members of the alpha-2 subdivision of Proteobacteria. They are catalogued on the Brucella rRNA branch of rRNA superfamily IV. Thus, from the previous CDC group Vd, a novel genus and a new species, Ochrobactrum anthropi, was proposed [21][22]. The type strain was Gram-negative, aerobic, rod shaped, non-pigmented and motile. It produced acid from a selection of carbohydrates and reduced both nitrate and nitrite and possessed a GC ratio between 56 to 59% [21]. Almost all 56 strains categorised as CDC GroupVD that were used to support the new genus Ochrobactrum came from various human clinical specimens. Since the initial description of O. anthropi, several other species have since been described (Table 1 and Figure 1). Certain Ochrobactrum spp. can be opportunistic pathogens especially in a hospital environment with the majority of reported cases due to hospital-acquired infections in patients with indwelling and invasive medical devices, including central venous catheters and drainage tubes [23]. In addition, the organism shows widespread resistance to penicillins and other antibiotics that cause clinical management issues with immunocompromised hosts [24][25]. The phylogenetic relationship between all described Ochrobactrum spp can be seen in Figure 1. 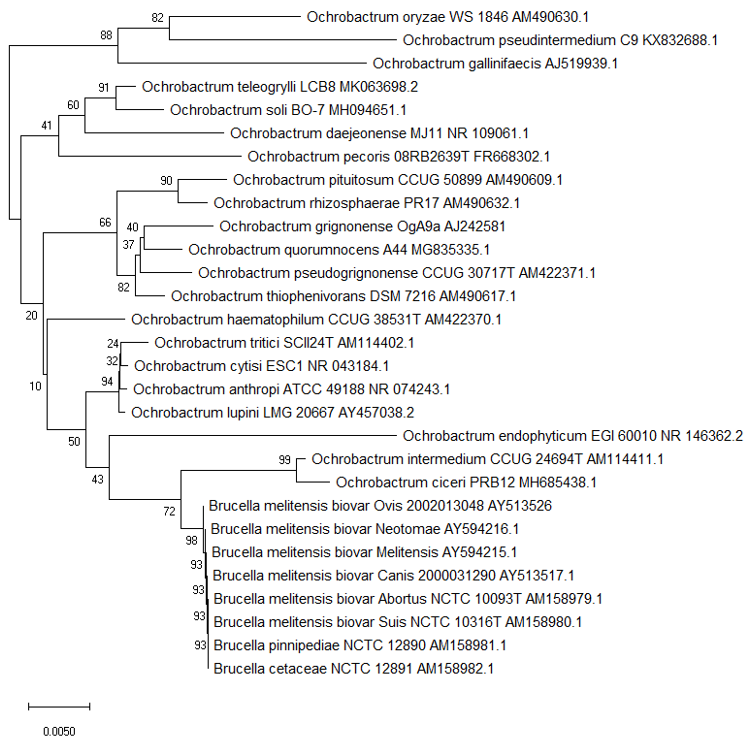 Figure 1. Phylogenetic structure of the genus Ochrobactrum along with the genus Brucella. (a) The tree based on partial 16S rRNA gene sequences obtained using neighbour joining with Maximum Composite Likelihood method (MEGA package). GenBank accession numbers are given with the species name. Numbers at nodes are bootstrap values based on 1000 resamplings. Bar, 0.0050 substitutions per site [41][42].