+1 point
Thank you for your contribution! You can also upload a video entry related to this topic through the link below: https://encyclopedia.pub/user/video_add?id=32098
Check Note
2000/2000
Environmental Niche Modelling

Edit
Upload a video
The content is sourced from: https://handwiki.org/wiki/Environmental_niche_modelling

Environmental niche modelling, alternatively known as species distribution modelling, (ecological) niche modelling, predictive habitat distribution modelling, and climate envelope modelling refers to the process of using computer algorithms to predict the distribution of species in geographic space on the basis of a mathematical representation of their known distribution in environmental space (= realized ecological niche). The environment is in most cases represented by climate data (such as temperature, and precipitation), but other variables such as soil type, water depth, and land cover can also be used. These models allow for interpolating between a limited number of species occurrence and they are used in several research areas in conservation biology, ecology and evolution. The extent to which such modelled data reflect real-world species distributions will depend on a number of factors, including the nature, complexity, and accuracy of the models used and the quality of the available environmental data layers; the availability of sufficient and reliable species distribution data as model input; and the influence of various factors such as barriers to dispersal, geologic history, or biotic interactions, that increase the difference between the realized niche and the fundamental niche. Environmental niche modelling may be considered a part of the discipline of biodiversity informatics.

Environmental niche models are correlative models. They relate observed presences of a species to values of environmental variables at those sites. Some models use absences, as well, but the most commonly used models use presence-only data, perhaps together with 'random background' data. Disagreement in the literature exists over whether environmental niche models portray the realized niche, which is determined by biotic and abiotic constraints or the fundamental niche, which is determined by abiotic constraints. In contrast, mechanistic (or process-based) models assess the bio-physiological aspects of a species to generate the conditions in which the species can ideally persist, based on observations made in controlled field or laboratory studies. As such it aims at modelling the fundamental niche of the species. See [1] for a comparison between mechanistic and correlative models.

Niche modelling algorithms include "profile methods", simple statistical techniques that use e.g. environmental distance to known sites such as BIOCLIM,[2][3] and DOMAIN; "regression" (e.g. forms of generalized linear models); and "machine learning" methods such as maximum entropy (MAXENT). An incomplete list of algorithms that have been used for niche modelling includes: 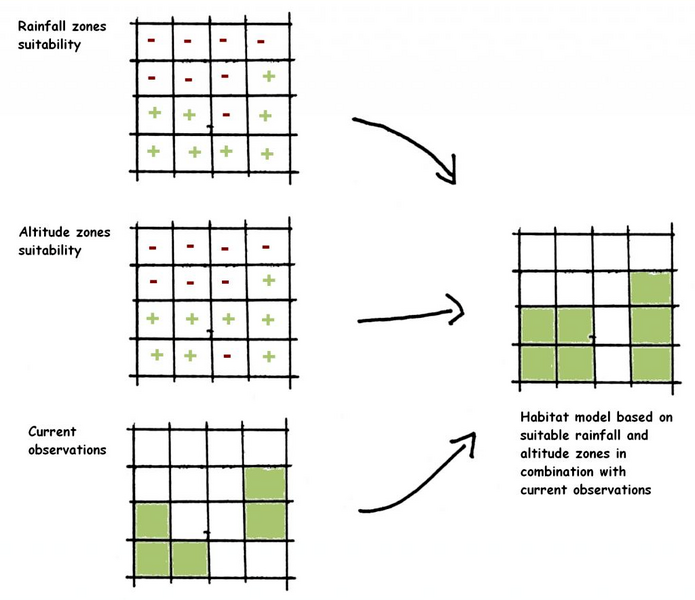 SPACES is an online Environmental niche modeling platform that allows users to design and run dozens of the most prominent algorithms in a high performance, multi-platform, browser-based environment.

MaxEnt is the most widely used method/software uses presence only data and performs well when there are few presence records available.

The Biodiversity and Climate Change Virtual Laboratory (BCCVL) is a "one stop modelling shop" that simplifies the process of biodiversity and climate impact modelling. It connects the research community to Australia’s national computational infrastructure by integrating a suite of tools in a coherent online environment. Users can access global climate and environmental datasets or upload their own data, perform data analysis across six different experiment types with a suite of 17 different algorithms, and easily visualise, interpret and evaluate the results of the models. Experiments types include: Species Distribution Model, Multispecies Distribution Model, Species Trait Model (currently under development), Climate Change Projection, Biodiverse Analysis and Ensemble Analysis. Example of BCCVL SDM outputs can be found here

Most niche modelling algorithms are available in the R packages 'dismo', 'biomod2' and 'mopa'.

Software developers may want to build on the openModeller project.

The Collaboratory for Adaptation to Climate Change adapt.nd.edu has implemented an online version of openModeller that allows users to design and run openModeller in a high-performance, browser-based environment to allow for multiple parallel experiments without the limitations of local processor power.

More
©Text is available under the terms and conditions of the Creative Commons-Attribution ShareAlike (CC BY-SA) license; additional terms may apply. By using this site, you agree to the Terms and Conditions and Privacy Policy.
Upload a video for this entry
Information
Subjects: Others
Contributor MDPI registered users' name will be linked to their SciProfiles pages. To register with us, please refer to https://encyclopedia.pub/register :
HandWiki
View Times: 24
Entry Collection: HandWiki
Revision: 1 time (View History)
Update Time: 31 Oct 2022
Table of Contents
1000/1000
Hot Most Recent