Submitted Successfully!
Thank you for your contribution! You can also upload a video entry related to this topic through the link below:
https://encyclopedia.pub/user/video_add?id=3185
Check Note
2000/2000
Mesoamerican Genetic Studies
Edit

Mesoamerica is a historically and culturally defined geographic area comprising current central and south Mexico, Belize, Guatemala, El Salvador, and border regions of Honduras, western Nicaragua, and northwestern Costa Rica. The permanent settling of Mesoamerica was accompanied by the development of agriculture and pottery manufacturing (2500 BCE–150 CE), which led to the rise of several cultures connected by commerce and farming. Hence, Mesoamericans probably carried an invaluable genetic diversity partly lost during the Spanish conquest and the subsequent colonial period. Mesoamerican ancient DNA (aDNA) research has mainly focused on the study of mitochondrial DNA in the Basin of Mexico and the Yucatán Peninsula and its nearby territories, particularly during the Postclassic period (900–1519 CE).

Mesoamerica was home to different human cultures connected by commerce and farming, and whose varied genetic backgrounds created an invaluable source of genetic diversity in the continent. Previous studies have attempted to uncover the peopling process of Mesoamerica using genetic approaches on modern-day Indigenous and cosmopolitan populations, mostly from Mexico and Guatemala. These analyses mainly focused on studying the so-called uniparental markers: the mitochondrial DNA (mtDNA) [1][2][3][4][5][6][7][8][9][10][11] and the Y-chromosome[1][3][12][13][14], which allow for demographic inference of maternal and paternal ancestries, respectively. Other studies further analysed single-nucleotide polymorphisms (SNPs—variable genomic positions that are present at a frequency ≥1% in the population) located on the autosomes (non-sex chromosomes)[15][16], or sequenced complete exomes (genomic regions that encode proteins) in order to describe Mexican genetic variation, population history, adaptation to the environment, and potential implications for biomedical research [17]. Importantly, this body of work contributes valuable data to describe the global human genetic diversity, especially since Indigenous populations from the Americas are among the most underrepresented populations in human genomic studies [18][19][20].

Most of these genetic studies proposed a single origin for Mesoamerican populations [11][12][13][17], instead of a dual origin as previously argued by Mizuno et al. (2014) [10]. Moreover, Sandoval and colleagues [6][13] analysed the Indigenous population substructure. They demonstrated that the patterns observed by analysing uniparental markers do not display significant population stratification in relation to linguistics, implying that genetic divergence preceded linguistic diversification. It was also shown that modern-day Mesoamerican-related populations contain higher levels of genetic diversity and lower levels of autozygosity (DNA segments identical by descent) compared to modern populations related to other cultural areas, such as Aridoamerica (Figure 1) [9][11][13][16]. These observations agree with the hypothesised importance of agriculture and trade in pre-Columbian Mesoamerica compared to the Aridoamerican hunter-gatherer lifestyle from the northern regions, to foster population movements and admixture that increase genome-wide levels of genetic diversity.

Inferring the population history of Mesoamerica through genetic studies that solely incorporate modern-day populations can be challenging due to recent historical events, such as population admixture with European, African, or Asian populations, that can distort pre-colonisation genetic signals. For instance, present-day Mexicans have, in general, three different ancestries: Native American, European (closely related to Iberians), and African. While the African component is generally minimal, the European component has a much lower proportion in Native Mexicans than what is found in cosmopolitan Mexicans. Notably, the Native American ancestry component can be divided into six separate ancestries [16]. Three of these are restricted to isolated populations of the northwest, southeast, and southwest, while the other three are widely geographically distributed [16]. Hence, it is essential to include pre-colonisation samples from the archaeological record to contextualise the true genetic diversity and population substructure of ancient Mesoamerica and identify genetic ancestry that might have been lost since the arrival of the Spanish.

In spite of the extensive archaeological, linguistic, and anthropological research on pre-Columbian Mesoamerica, there have been surprisingly few aDNA studies. Therefore, there is a current lack of genetic knowledge about the genetic history of the region, probably because of the highly degraded nature of genetic material from tropical environments. Thus, currently available ancient genetic data rely mostly on mtDNA studies. The human mtDNA is a circular double-stranded DNA molecule that is maternally inherited, does not recombine [21][22], and has a higher mutation rate compared to the nuclear genome [23]. The sizes of the human reference mtDNA sequences rCRS [24] and RSRS [25] are small at 16,569 base pairs. These characteristics make mtDNA a suitable tool for maternal phylogenetic and phylogeographic inferences [26]. In addition, the high copy number of mtDNA in cells increases the odds of successfully obtaining ancient mtDNA in archaeological remains [27][28]. Mitochondrial haplogroups are lineages defined by shared genetic variation. They have been used to represent the major branches along the mitochondrial phylogenetic tree, unravelling the evolutionary paths of maternal lineages back to human origins in Africa and the subsequent peopling of the world. The Indigenous haplogroups found in present-day non-Arctic populations from the Americas are A2, B2, C1, D1, and D4h3a. All of them descend from a founding population that split from Northern Eurasian lineages ~25,000 years ago and remained stranded in Beringia for ~6000 years before starting to colonise the Americas ~16,000 years ago [29][30][31]. However, there are limitations associated with the study of mtDNA. Indeed, mtDNA represents the evolutionary history of the female population at a single locus and sample sizes are often small. Therefore, it is necessary to remain cautious when interpreting mtDNA results mainly when there is disagreement with those obtained from genome-wide analysis. Nevertheless, most pre-Columbian Mesoamerican genetic data (Tables 1 and 2) originate from general diagnosis of mtDNA haplogroup variants in the control and/or coding regions. This early technique tested restriction fragment length polymorphisms (RFLPs) which, in this case, result from the presence or absence of mitochondrial sites cleaved by restriction enzymes in order to characterise the mitochondrial haplogroups. Although RFLPs were reported in earlier studies, the partial or complete sequencing of the mitochondrial Hypervariable Regions 1 and 2 (HVR1 and HVR2, respectively) rapidly became the most common strategy to study mtDNA history. Only a few studies in Mesoamerica have been recently able to reconstruct complete ancient mitogenomes [32][33][34] and only one has also generated and analysed genomic data [35]. 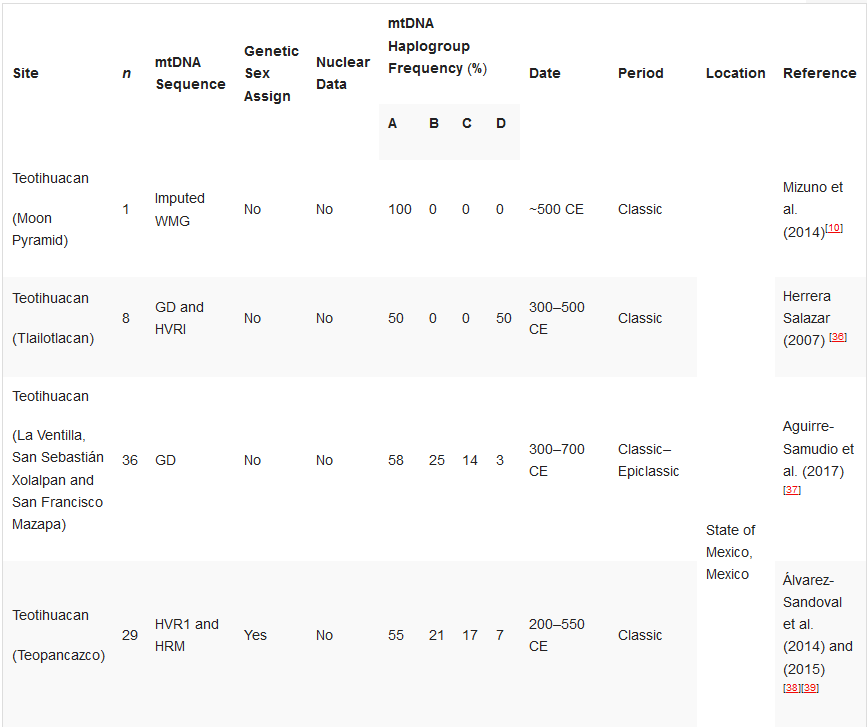 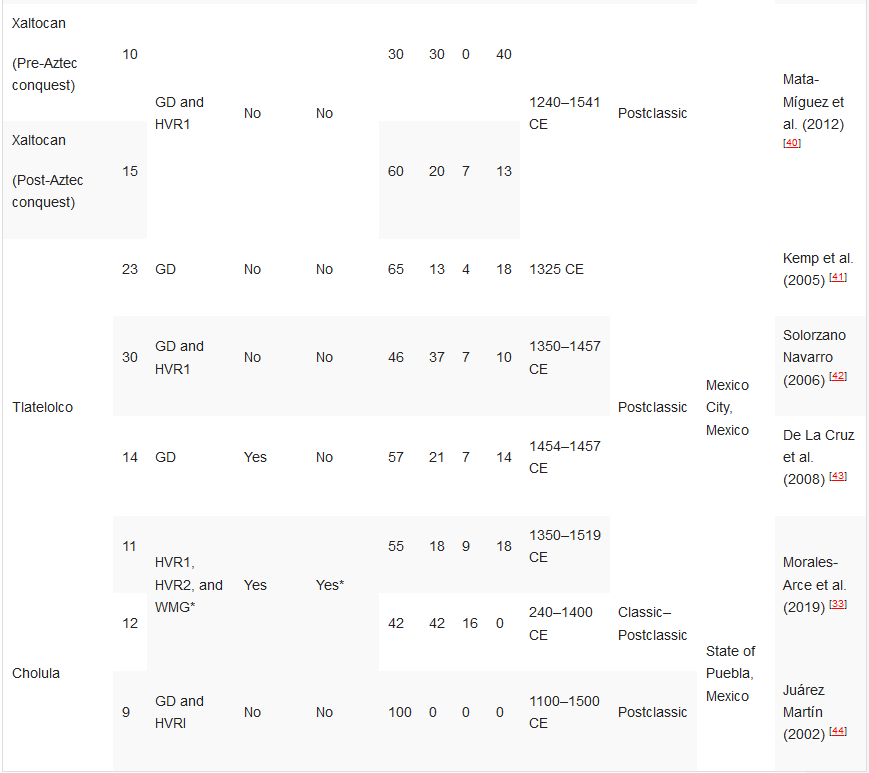 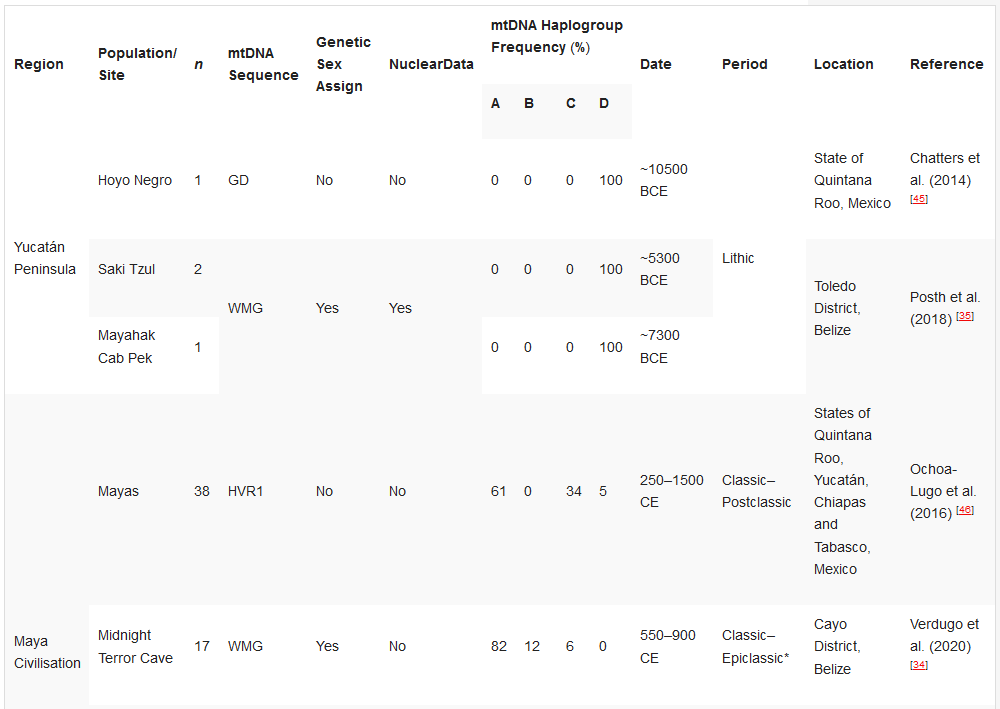 Interestingly, existing aDNA data come from the Central and Southeast areas of Mesoamerica, corresponding to the Basin of Mexico and the Yucatán Peninsula and its nearby territories, respectively. Nonetheless, it should be noted that Mesoamerica contains other regions with extensive archaeological and anthropological records that have not been investigated in aDNA studies yet. These regions include the Gulf Coast and Oaxaca. The Gulf Coast was initially peopled by the Olmecs (the earliest known major Mesoamerican civilisation) and was later home to the city of El Tajín. Oaxaca comprises the current Mexican state of Oaxaca as well as the border regions of Guerrero, Puebla, and Veracruz. It was home to the Mixtec and Zapotec civilisations, the Preclassic–Classic city of Monte Albán being the most important archaeological site. In contrast, the northern and western regions of Mesoamerica are largely understudied from an archaeological and anthropological perspective and have been severely looted. The North was the transition area between Mesoamerica and Aridoamerica inhabited by both hunter-gatherers and farmers and it was nearly abandoned during the Postclassic period. The West was a geographically diverse area that led to the rise of highly diverse societies characterised by the shaft tomb tradition in the Preclassic and Classic periods and the Tarascan state during the Postclassic [49].