Submitted Successfully!
Thank you for your contribution! You can also upload a video entry related to this topic through the link below:
https://encyclopedia.pub/user/video_add?id=3084
Check Note
2000/2000
Mimusops zeyheri
Edit
Upload a video
This entry is adapted from 10.3390/plants9111486

Many African countries are endowed with rich biodiversity with enormous nutritional and economic prospects, but the majority of these resources are not fully harnessed. Exploring these neglected resources, for example, the Transvaal red milkwood tree [(Mimusops zeyheri) Sond. family: Sapotaceae] is of paramount importance for food and nutritional security as well as economic prosperity. This review provides a critical appraisal of the nutritional and health benefits as well as the economic potential of Mimusops zeyheri. The plant is known for its diverse uses among rural communities. In folk medicine, the decoction from the bark and leaves of Mimusops zeyheri are used for treating wounds and ulcers, while the root is used as an infusion taken to treat candidiasis and other health issues. The nutritional profile of the fruit tree is similar to popular exotic fruits and richer in vitamin C when compared to guava and orange. Mimusops zeyheri is a rich source of vitamins, protein, and fatty acids. Based on the rich chemical pool, especially in the fruit and seeds, it has the potential to provide an accessible, readily available, and affordable enriched functional food with valuable health benefits. However, the successful exploration of Mimusops zeyheri for food security and sustainability requires multidisciplinary research. This will help achieve the envisaged food-nutrition security and poverty alleviation potential of the plant, especially among local communities.

Mimusops zeyheri is a perennial fruit tree and a member of the family Sapotaceae and the common names include Transvaal red milkwood (English), Moepel (Afrikaans), Mmupudu (Northern Sotho), Umpushane (Zulu), Mubululu (Venda) and Mgamba kapu (Swati) [1]. It is a medium-sized tree ranging from 15–25 m high and the bark is grey to dark brown [1]. The leaves are glossy and arranged spirally, stipules are absent, and the petiole is 0.5–3.5 cm long [1]. The fruit is yellow-orange, 4.5 cm long at maturity, with 1–2 seeds that are shiny, but pale brown with a small circular basal scar.

The tree occurs in several southern African countries including South Africa, the Kingdom of Eswatini (Swaziland), Botswana, Lesotho, Namibia, Mozambique, and Zimbabwe [2][3]. As shown in Figure 2, its distribution extends to other parts of tropical Africa. Mimusops zeyheri occurs in open, dry, and bushveld woodland [4][5]. It is suited for cultivation in low to medium-altitude areas of summer rainfall where frost is minimal or absent and can withstand various soil and climate conditions [6]. In larger gardens and open spaces, Mimusops zeyheri is easily cultivated and best used as a reliable shade and used as a shelter for birds and other animals [[7]. Furthermore, Mimusops zeyheri can tolerate freezing without damage and it requires little maintenance (six or more hours of daily sunlight and a minimal amount of water to survive). 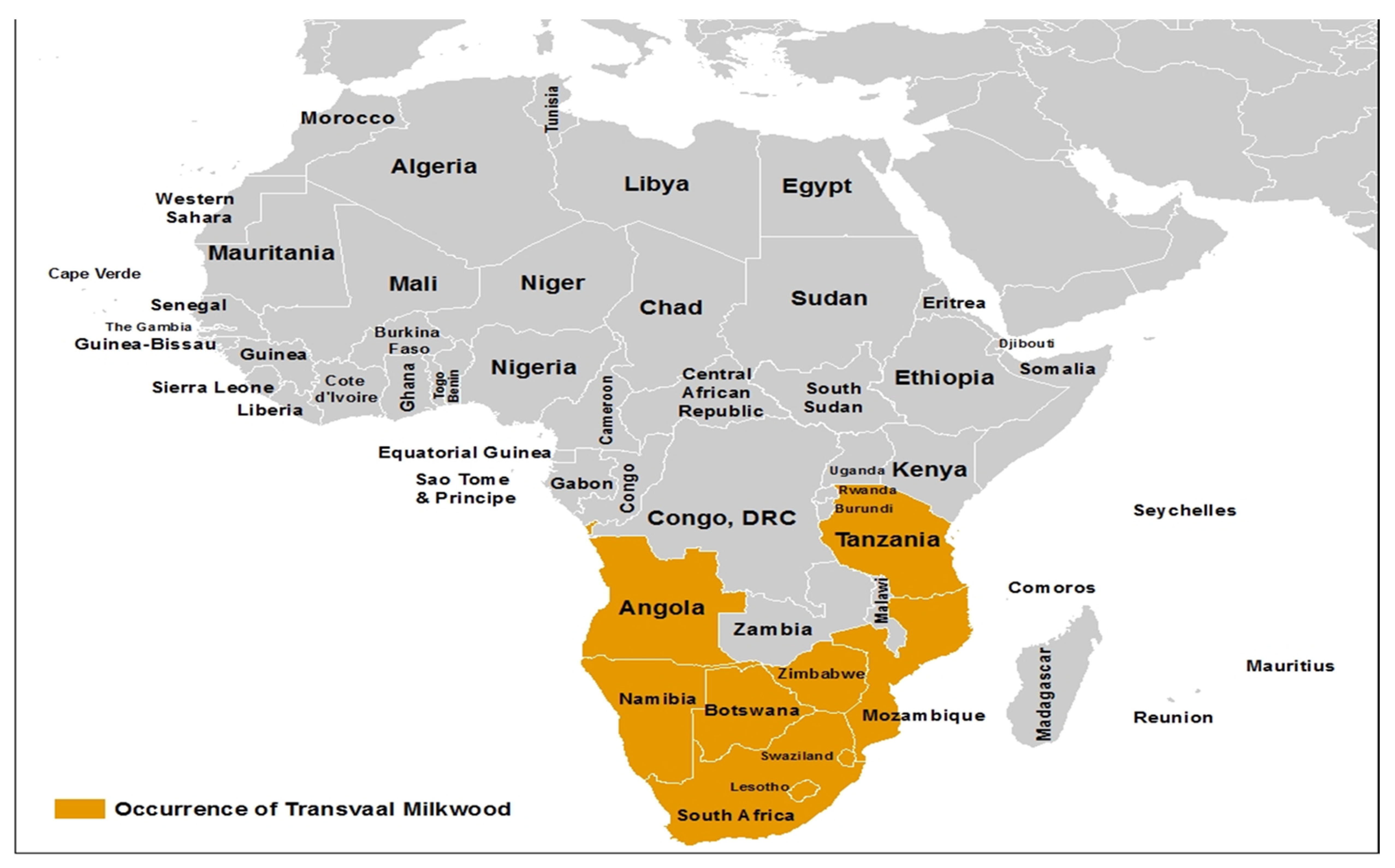 The continuous increase in the human population remains a key cause for concern in terms of meeting the daily food, nutritional, and medicinal requirements, especially in developing countries. Therefore, documenting the benefits and potential of Mimusops zeyheri is important from nutrition and health as well as ethnomedicinal perspectives. This is also relevant for the perception and socio-economic benefits of the potential consumers for this undervalued fruit tree. Some of these uses are discussed in the following sections.

Analysis of the seeds revealed the presence of different mineral elements including calcium and phosphorus, organic matter, crude protein, and ash content [18]. Based on the proximate analysis, dry matter, organic matter, and ash content constituted 91.1%, 88.3%, and 2.8% of the seed mass, respectively. Chivandi et al. [18] identified 17 amino acids in the seeds of Mimusops zeyheri, which accounted for an estimated 97% of the crude protein content (9.3%). Glutamic acid, which was the major amino acid constituted approximately 13.8% of the crude protein. Furthermore, oleic and palmitic acids were the only lipids that were detected. Neutral detergent fiber and acid detergent fiber constituted 33.2% and 15.3%, respectively [17][18].

Mimusops zeyheri contains varying concentrations of the different compounds (Table 2). Particularly, the plant is a rich source of vitamins (A = retinol, C = ascorbic acid and E), amino acids, and fatty acids [18][19]. In addition, the medium fiber content in the Mimusops zeyheri seeds could be useful in providing the necessary bulk for the facilitation of normal gastrointestinal motility in the food and feeds of humans and animals, respectively [18]. Based on the presence of vitamin E, Mimusops zeyheri seeds could potentially be used as a dietary ingredient to increase the systemic antioxidant pool, thus protecting the body against potential oxidative damage.

Mimusops zeyheri is a member of the family Sapotaceae, which are well-known for their wide range of phytochemicals, especially saponins, flavonoids, and polyphenolics [23]. Currently, the biological activities of Mimusops zeyheri are relatively scarce, however, studies on members of the genus Mimusops have demonstrated antifungal, gastro-protective, and antinociceptive properties [23].

Other uses of Mimusops zeyheri have been documented in areas where the species exists. The importance of the fruit and pulp of Mimusops zeyheri for the production of jelly, alcoholic, and non-alcoholic beverages have been indicated [6]. These products are currently sold in rural and urban open markets, thereby contributing to the economic status of rural households [18][24]. Mimusops zeyheri is believed to improve soil fertility and this is a good contribution toward environmental sustainability as this reduces the cost of agricultural production [11][24]. In addition, the latex from the tree is used as a pesticide and the dried pulp can stay long, stored, and for consumption during winter [25]. Furthermore, Mimusops zeyheri is a useful multipurpose tree, which could be economically useful for furniture and other carpentry purposes. It is also a good horticultural tree for shade, energy, fencing, and ornamental purposes [10].

Based on the study by Chivandi, Davidson, and Erlwanger [20], Mimusops zeyheri has enormous economic and environmental benefits for rural communities through the sales of seedlings and/or fruits and combating land degradation. In addition, Ripple et al. [25] identified the seeds of Mimusops zeyheri as a potential source of calcium, which could be useful for human and animal nutrition requirements.

More
© Text is available under the terms and conditions of the Creative Commons Attribution (CC BY) license; additional terms may apply. By using this site, you agree to the Terms and Conditions and Privacy Policy.
Upload a video for this entry
Information
Subjects: Plant Sciences
Contributor MDPI registered users' name will be linked to their SciProfiles pages. To register with us, please refer to https://encyclopedia.pub/register :
Adeyemi Oladapo Aremu
View Times: 573
Revisions: 2 times (View History)
Update Time: 19 Nov 2020
Table of Contents
1000/1000
Hot Most Recent