Submitted Successfully!
Thank you for your contribution! You can also upload a video entry related to this topic through the link below:
https://encyclopedia.pub/user/video_add?id=287
Check Note
2000/2000
GABAAR-Mediated Currents
Edit
Upload a video

Alcohol and benzodiazepine are useful to mitigate anxiety through enhancing GABAAR-mediated inhibition. However, alcohol and benzodiazepine are known as abused drugs. The alcohol or benzodiazepine withdrawal syndrome appears following a reduction on alcohol or benzodiazepine use after a period of excessive use [1][2][3][4]. The alcohol or benzodiazepine withdrawal symptoms typically include anxiety, sweating, hand tremor and sleep disturbance. The underlying mechanisms involve neuronal adaptations, which are revealed as decreased GABAergic responses [5] and enhancement of NMDA responses [6][7][8][9]. Although the exact mechanism for the reduced responsiveness of GABAARs remains uncertain, changes in surface GABAAR protein level and subunit composition, changes in turnover, recycling, and production rates, degree of phosphorylation and decreased coupling mechanisms between GABA and alcohol/benzodiazepine sites are thought to be involved in the reduced responsiveness [10][11][12][13]. It has recently been demonstrated that the benzodiazepine diazepam caused downregulation of GABAergic inhibition through phospholipase C (PLCδ)/Ca2+/calcineurin signaling pathway [14]. The study showed that overexpression of PRIP-1 suppressed diazepam-dependent activation of PLCδ and diazepam-dependent downregulation of GABAARs in HEK293 cells [14], indicating that PRIP-1 acts as an inhibitor by outcompeting the PLCδ binding to GABAARs. Because intracellular Ca2+ and calcineurin activity are increased in PRIP-DKO mice [15], these findings suggest that the diazepam-induced long-term downregulation of GABAergic inhibition is mediated by PLCδ/Ca2+/calcineurin signaling pathway. Nevertheless, it is also true that calcineurin causes resensitization of GABAAR-mediated currents by facilitating their desensitization [15][16]. Given the apparently contradictory behaviors of GABAAR-mediated currents by calcineurin activation, the two different behaviors of GABAAR-mediated currents may depend on whether calcineurin activation occurs before or after activation of GABAARs. 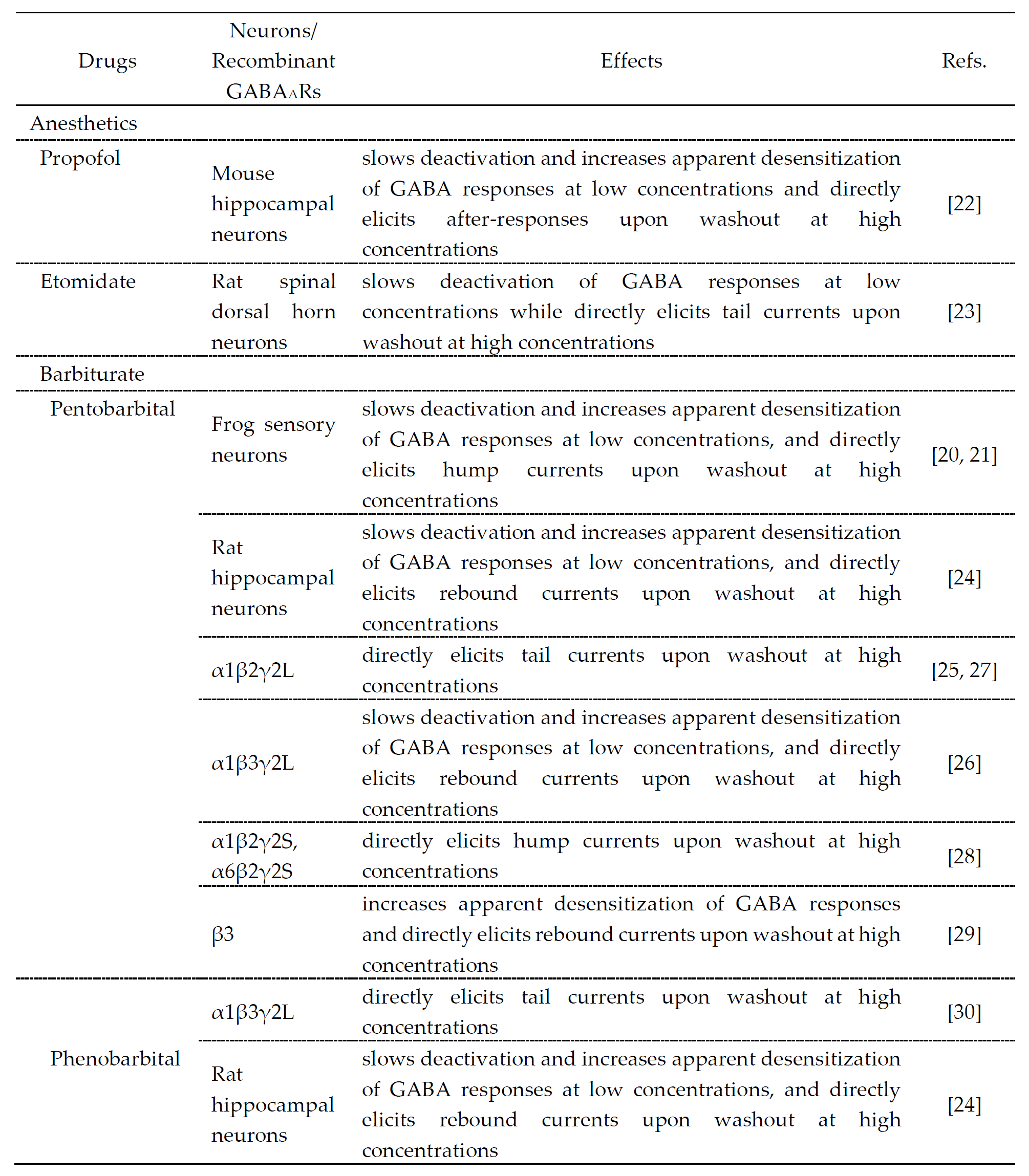 3. A possible Kinetic Mechanism for Resensitization of GABAA Currents 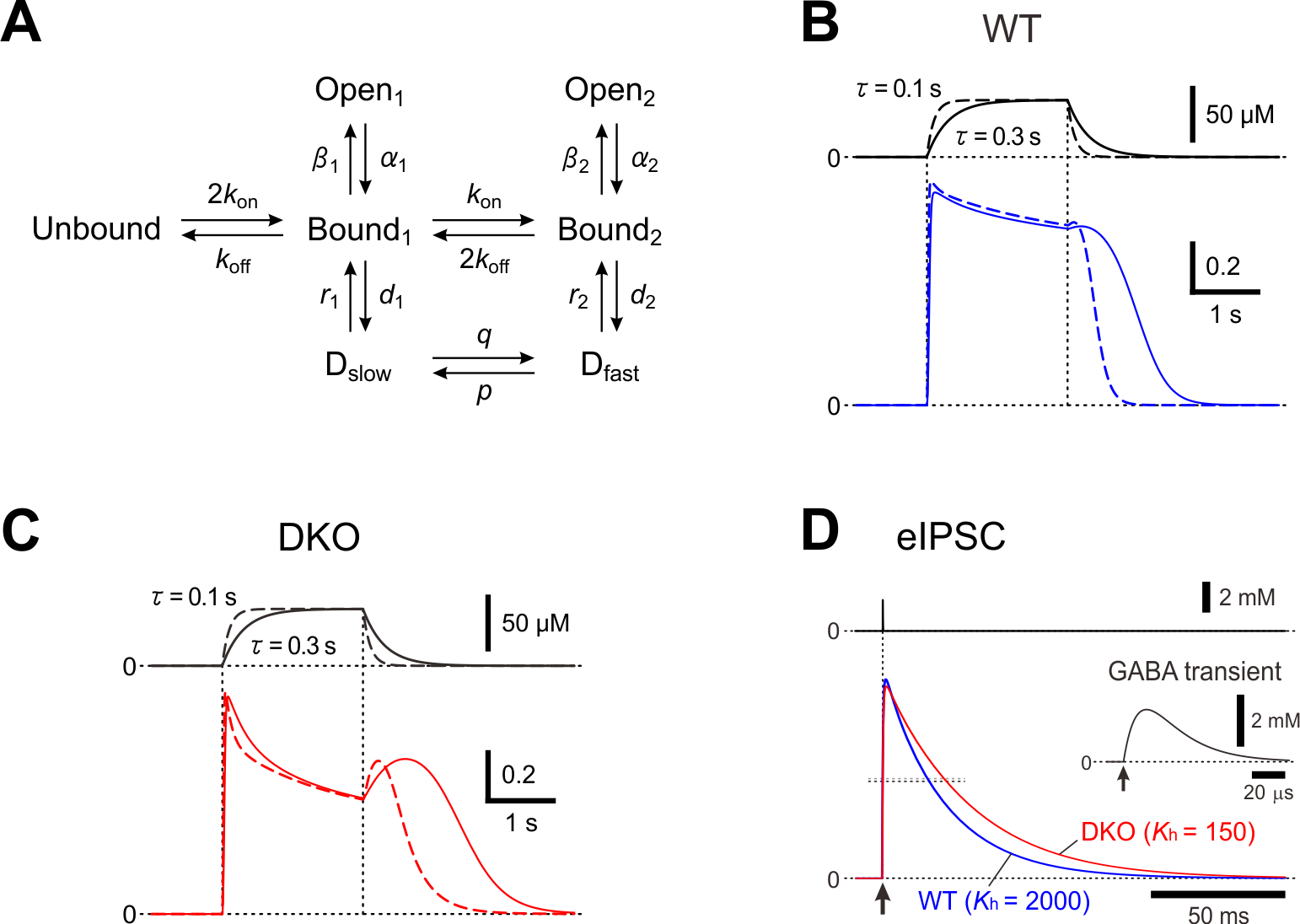 Figure 1. A kinetic model for a hump-like tail-current. (A) A kinetic model of GABAARs representing mono- and double-liganded states, each providing access to open and desensitized states. (B and C) Top; Presumed [GABA] changes created by puff application of GABA with a rectangular pressure pulse through a puff pipette containing 200 μM GABA in the extracellular medium was assumed to be diluted 4 times, and the onset and offset of the puff application were assumed to be attenuated with a time constant raging between 0.1 and 0.3 sec. Bottom; superimposed traces of the simulated GABAAR-mediated currents under the condition that the attenuation time constant is 0.3 and 0.1 sec (solid and interrupted traces, respectively) in simulated wild-type (B) and PRIP-DKO (C) pyramidal cells. (D) Superimposed traces of a simulated wild-type and PRIP-DKO eIPSC induced by a GABA transient shown on an expanded time scale (inset) with a small maximum conductance. Adopted from [15] and [31].

Based on the experimental and simulation studies, the regulatory mechanisms of GABAARs are schematically depicted (Figure 2). 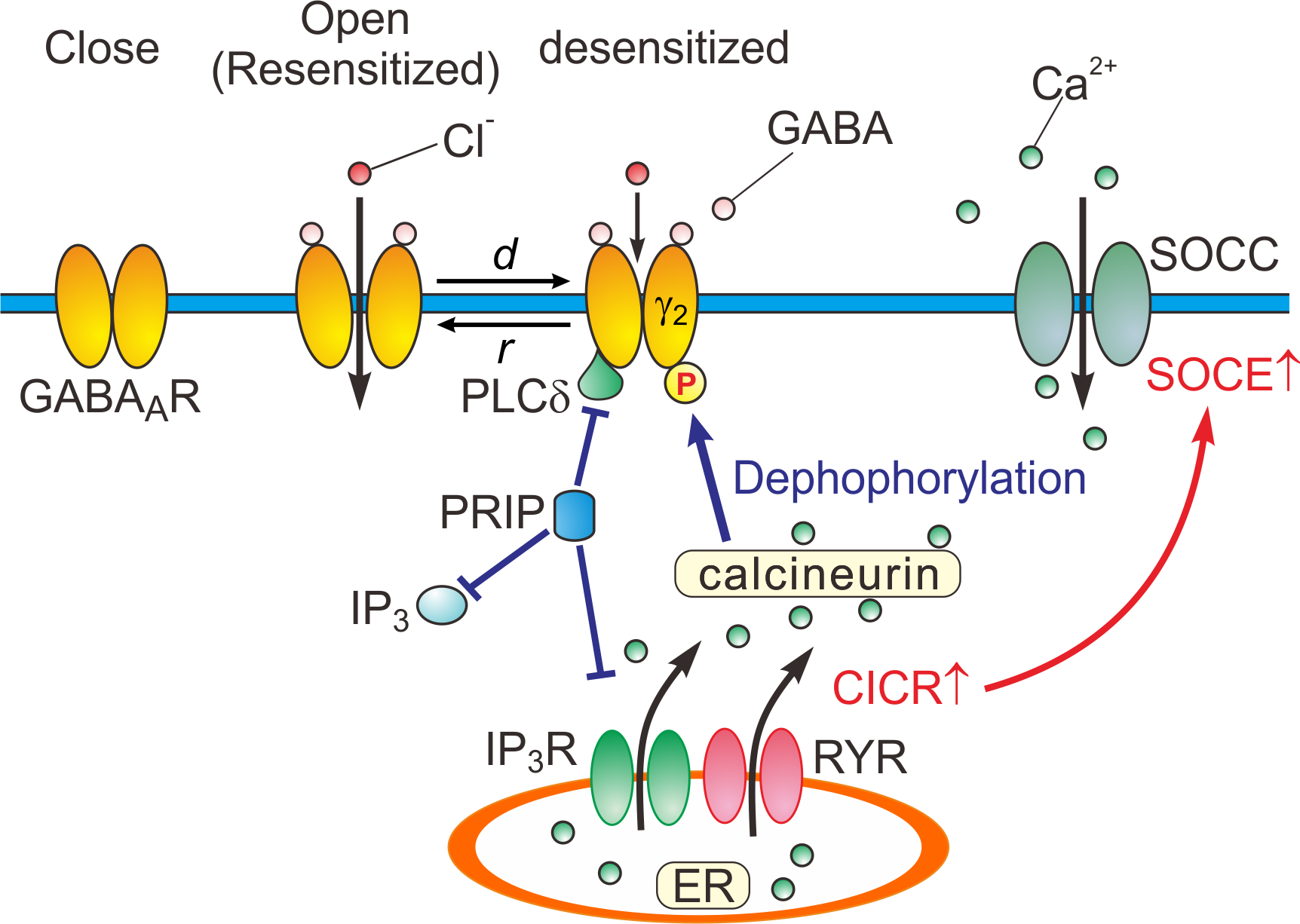 Figure 2. Close, open (resensitized) and desensitized states of GABAARs. When GABA binds to GABAARs, the receptors open the pore, and consequently increasing the permeability of the ion pore to Cl-. In response to a prolonged application of GABA, GABAARs are desensitized (d) by increased calcineurin activity due to potentiated Ca2+-induced Ca2+ release (CICR) followed by store-operated Ca2+ entry (SOCE) [15]. GABAARs are resensitized through the de-desensitization (r) at the offset of the GABA puff. PRIP outcompetes the PLCδ in binding to GABAAR β subunits [14]. d: desensitization, r: resensitization, RYR: ryanodine receptor, SOCC: store-operated Ca2+ channel, IP3R: inositol trisphosphate receptor.

More
©Text is available under the terms and conditions of the Creative Commons-Attribution ShareAlike (CC BY-SA) license; additional terms may apply. By using this site, you agree to the Terms and Conditions and Privacy Policy.
Upload a video for this entry
Information
Subjects: Pharmacology & Pharmacy
Contributors MDPI registered users' name will be linked to their SciProfiles pages. To register with us, please refer to https://encyclopedia.pub/register :
Hiroki Toyoda
,
Youngnam Kang
View Times: 578
Revisions: 2 times (View History)
Update Time: 29 Oct 2020
Table of Contents
1000/1000
Hot Most Recent