Submitted Successfully!
Thank you for your contribution! You can also upload a video entry related to this topic through the link below:
https://encyclopedia.pub/user/video_add?id=2777
Check Note
2000/2000
Beetroot, A Remarkable Vegetable
Edit
Upload a video
This entry is adapted from 10.3390/antiox9100960

The cardioprotective effects of dietary nitrate from beetroot in healthy and hypertensive individuals are undeniable and irrefutable. Nitrate and nitrate-derived nitrite are precursors for nitric oxide synthesis, which promotes positive effects on cardiomyocytes and myocardial ischemia/reperfusion, improving endothelial function, reducing arterial stiffness and stimulating smooth muscle relaxation, consequently decreasing systolic and diastolic blood pressures. Moreover, beetroot is also enriched in other phytochemicals, such as betanin, saponins, polyphenols, and organic acids that may resist gastrointestinal digestion, raising the hypothesis that the cardioprotective effects of beetroot intake result from the combination of nitrate/nitrite and bioactive compounds that limit the generation of reactive oxygen species and downregulate pro-inflammatory genes while upregulating cytoprotective ones. Nitrate and phytochemical concentrations can be adjusted in beet formulations to fulfill requirements for acute or long-term supplementations, enhancing patient adherence to beet intervention to optimizing the health-promoting effects.

Epidemiological studies have demonstrated that dietary nitrate (NO3-) from certain vegetables can provide a physiological substrate for nitric oxide (NO) production which, in turn, supports cardiovascular function, causes vasodilation, and decreases blood pressure [1,2,3,4]. In addition, systematic reviews and meta-analyses have demonstrated the potential health benefits of the dietary intake of secondary metabolites found in vegetables, such as polyphenols, in decreasing the risk of chronic and degenerative diseases [5,6,7]. Food matrices derived from vegetables contain a complex mixture of these compounds, at variable concentrations, which may not yet have been well characterized [1].

Red beetroot (Beta vulgaris L. species), a member of the Betoideae subfamily, within the Amaranthaceae/Chenopodiaceae alliance, is a source of bioactive compounds, including dietary NO3-, betanin, phenolic and other antioxidant compounds, as well as dietary fiber, minerals (potassium, sodium, iron, copper, magnesium, calcium, phosphorus, and zinc) and vitamins (retinol, ascorbic acid, and B-complex) [1,8].

The consumption of a regular serving portion of in natura or minimally processed beetroot cannot provide an NO3- concentration capable of triggering cardioprotective effects. The administration of beet-traditional formulations in large amounts in order to reach pharmacological NO3- concentrations reduces adherence to nutritional beetroot interventions [9,10,11].

Dietary NO3- supplementation from beetroot requires smart formulations, to provide convenient serving portions containing effective NO3- concentrations and bioactive compounds as a feasible alternative to the consumption of in natura vegetables.

The combination of concentrated fresh beetroot juice and beetroot chips in different amounts can adjust bioactive compound concentrations and result in attractive and convenient NO3--rich beetroot products. Several beetroot formulations have been formulated to provide convenient and attractive dietary NO3- sources with the aim of stimulating NO production and promoting beneficial-health effects, according to the group population to be supplemented [10,11,12,13].

Beetroot juice is the original formulation for dietary NO3- supplementation and has been applied as a prime for most of the novel formulations proposed in recent years, according to the aim of the clinical study and the volunteer population to be tested [1,10]. Fresh and concentrated beetroot juice is produced from beets in a food centrifuge processor without adding water. Another formulation, a beetroot gel, designed to supplement athletes with dietary NO3- during sports competitions, is prepared by mixing concentrated fresh beetroot juice, crashed beetroot chips and carboxymethyl cellulose at a 90:17:3 ratio. Recently, a novel formulation, a beetroot cereal bar, a snack food to be consumed between major meals, was designed for chronic dietary NO3- administration to individuals who present risk factors for developing cardiovascular diseases (1). These beetroot-cereal bars were produced from the compaction of concentrated fresh beetroot juice, crashed beet chips and cereals, such as oats, wheat, soybeans, corn, and rice into 60 g pieces serving portions, measuring 10 cm × 3 cm × 1.5 cm [9,14,15].

Betanin, a water-soluble pigment, that confers a red-violet colour to beetroot, is a powerful free radical scavenger due to its ability to donate electrons and hydrogen, which relies on the cyclic amine present in its structure, resembling ethoxyquin, a strong antioxidant, as well as hydroxyl groups (-OH), which are excellent hydrogen donors [16].

In vascular tissues, endothelial function is maintained and the atherogenesis process due to the antiradical activity of betanin (Figure 2). In addition, betanin can modulate redox-mediated signal transduction pathways involved in inflammation responses in endothelial cells by inhibiting the intercellular cell adhesion molecule-1 (ICAM-1), resulting in antiproliferative effects on human tumoral cells [17,18]. Betanin also regulates liver glucose metabolism-related enzymes in diabetes type II, such as those involved in the glycolytic pathways, like glucokinase, glucose-6-phosphatase, pyruvate kinase, in the pentose phosphate pathway, i.e., glucose-6-phosphate dehydrogenase, and in gluconeogenesis, like fructose-1,6-bisphosphatase [19].

Dietary NO3- is absorbed in the upper gastrointestinal tract, although 25% of ingested NO3- is captured by the salivary glands, where it is reduced to NO2- by commensal bacteria that express and secret the NO3--reductase enzyme in saliva. After the conversion of dietary NO3- to NO2- in the oral cavity, the NO2- in saliva is swallowed and reaches the stomach, where it is non-enzymatically decomposed in this acidic environment into NO and other bioactive nitrogen oxides by vitamin C or polyphenols [20].

NO, a low molecular weight compound (30.01 g/mol) with a short life (from 5 to 10 s) produced in gas form, can exert antioxidant functions and is considered a secondary messenger in human physiology. It acts on the vascular endothelium, central and peripheral neurons, and the immune system, inhibiting platelet activation, adhesion, and aggregation, modulating vascular tone, and improving human skeletal muscle function [3,21,22,23]. NO promote these effects through multiple pathways, which depend on the cell tissue and the amount of produced NO (Figure 3). 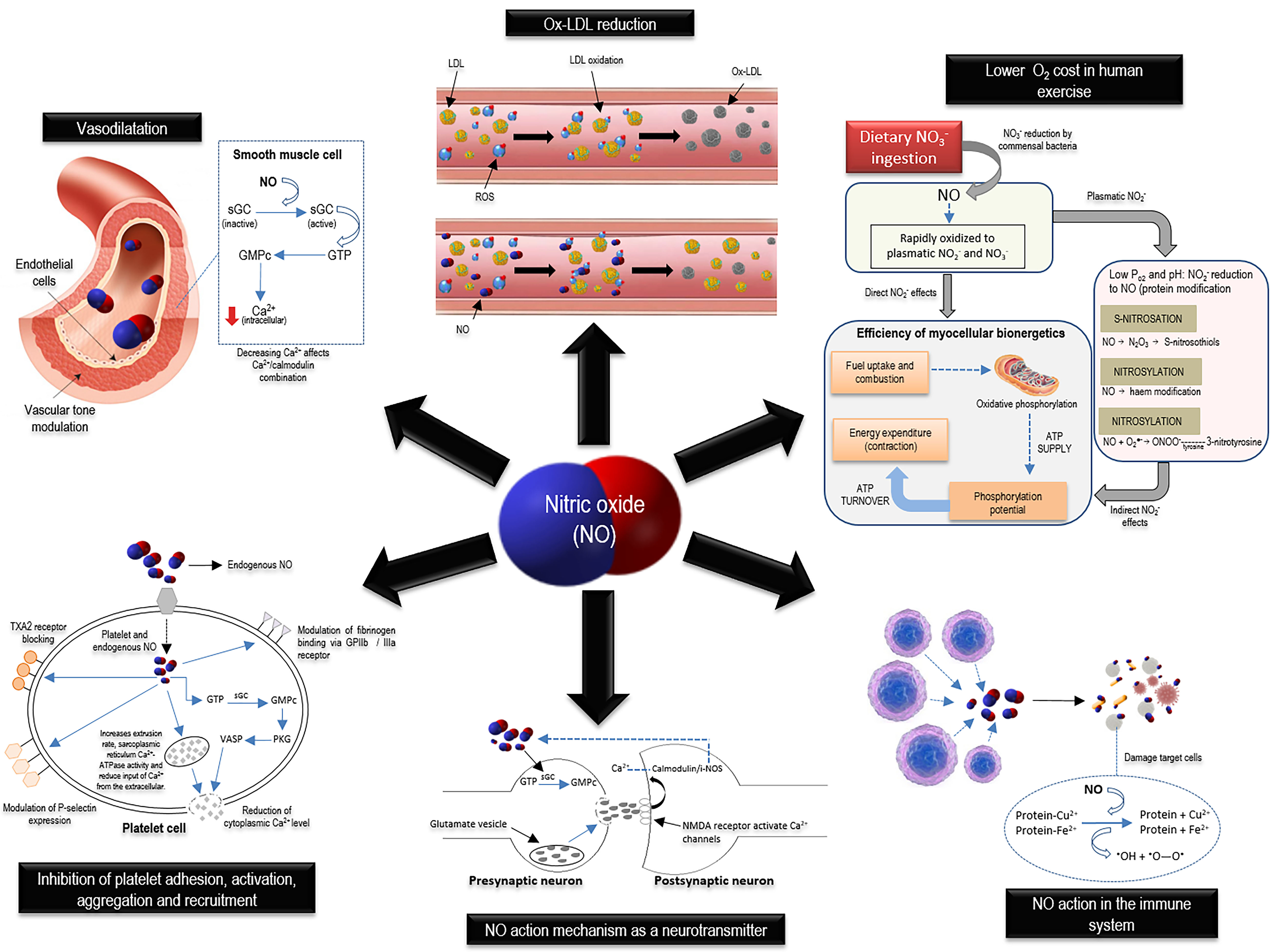 Interventions with dietary NO3− from beetroot positively affect cardiovascular and metabolic functions by modulating the gene expression patterns or regulating the activity of proteins and enzymes involved in these cellular processes. The cytoprotective effects of NO-derived from the NO3--NO2-/NO pathway may be collectively reinforced by certain bioactive compounds naturally found in beetroot. Betanin seems to be another remarkable compound found in beetroot, and may be a putative candidate to attenuate the oxidative stress status in humans.

More
© Text is available under the terms and conditions of the Creative Commons Attribution (CC BY) license; additional terms may apply. By using this site, you agree to the Terms and Conditions and Privacy Policy.
Upload a video for this entry
Information
Subjects: Nutrition & Dietetics
Contributor MDPI registered users' name will be linked to their SciProfiles pages. To register with us, please refer to https://encyclopedia.pub/register :
Vania Paschoalin
View Times: 413
Revision: 1 time (View History)
Update Time: 24 Oct 2020
Table of Contents
1000/1000
Hot Most Recent