+1 point
Thank you for your contribution! You can also upload a video entry related to this topic through the link below: https://encyclopedia.pub/user/video_add?id=27711
Check Note
2000/2000
Placenta of Pregnancy Complicated by Gestational Diabetes Mellitus

Gestational diabetes mellitus (GDM), a glucose intolerance developing or first recognized during pregnancy, leads to a series of short- and long-term maternal and fetal complications, somehow related to placenta structural and functional changes. The placenta has a key role in correct fetal development. A series of factors are related to the correct functioning of the placenta as maternal and fetal blood flow, expression and function of receptors and transporters, and appropriate nutrients.

As an introduction researchers consider it essential to describe the biological and medical aspects of the placental pathophysiologies. The placenta has a key role in correct fetal development. A series of factors are related to the correct functioning of the placenta as maternal and fetal blood flow, expression and function of receptors and transporters, and appropriate nutrients. It is well known that placenta in diabetes undergo a series of structural and functional changes due to the abnormal maternal milieu determined by elevated levels of glucose ad insulin [1]. Gestational diabetes mellitus (GDM), a glucose intolerance developing (or first recognized) during pregnancy that is not an overt diabetes [2], has been increasing over the last decade. It accounts for 12–18% of all pregnancies and is due mainly to the increased frequency of obesity [2][3]. This condition, if not properly diagnosed and treated, determines a series of short- and long-term maternal and fetal complications such as preeclampsia, cesarean delivery, birth trauma, macrosomia, neonatal hypoglycemia and hyperbilirubinemia [3][4][5]. Furthermore, women affected by GDM and their children are at high risk of developing cardiometabolic diseases (including type 2 diabetes, obesity, hyperlipemia, metabolic syndrome, hypertension, and cardiovascular disease) later in life [4][5]. GDM develops when beta cell insulin secretion is unable to compensate for the physiological pregnancy-induced insulin resistance, and/or in conjunction with an impaired beta cell function [6][7]. In this research, as recently evidenced, genetic, epigenetic and environmental factors contribute in determining insulin resistance and beta-cell disfunction, and consequently GDM development. In addition, the adverse intrauterine environment in patients with GDM could also have a negative impact on the establishment of the epigenomes of the offspring [6][7][8]. Furthermore, GDM is associated with altered concentrations of nutrients, inflammatory cytokines which can contribute to placenta modifications. This includes changes in the surface area and volume, as well as histological changes as an increased volume of the intervillous space and terminal villi, the number of syncytiotrophoblast, fibrinoid and glycogen deposits. These modifications may result in functional changes of the placenta, with consequent impairment of fetal development [1]. Recently, the new omics methodologies have been retained, as they are useful for the identification of new pathways and processes that could be affected in placenta modified by diabetes [9]. In this research, proteomics, based on the structural identification and quantitative evaluation of the proteins present in a cell, tissue or organism in a well-defined moment, and related to pathological conditions, has been proved to be a highly valid approach, together with metabolomics, genomic and metallomics [10]. It must be considered that the changes of the various biochemical pathways characteristic of an organism originating by a specific disease, drug or physiological activity reflect in the identification of novel biomarkers, is useful in the management of the diseases in clinical practice [11]. The identification of modified proteins in placenta of GDM patients and their possible involvement in placenta and fetal development is of key importance in order to outline prevention strategies of maternal and fetal complications. In a review focused on proteomic studies on placenta samples and placenta-derived cells of normal pregnant women, Robinson et al. [12] concluded that proteomic analysis is a promising approach to obtain information that is difficult to obtain with traditional approaches in pathological conditions.

In order to evaluate the results obtained in the research on the placenta protein profile, researchers considered it of interest to employ a general strategy based on four different aspects: (i) samples analyzed; (ii) instrumental approaches employed; (iii) obtained results; (iv) physiopathological meaning of the results. A preliminary investigation on the placenta protein profile [13] was based on pooled placenta omogenates from 20 healthy subjects and 20 GDM pregnant women.
The analytical strategy employed in the research is summarized in Figure 1. The biological samples under study were obtained by removing the placental cotyledon from the central region of the placenta to obtain villous tissue. Once thawed, 1 g of each placenta sample was washed with distilled water, dipped in ice-cold homogenization buffer and homogenized under ice-cooling with a blender. The homogenate was centrifuged twice at 15,000 rpm for 10 min. The supernatant, containing the hydrosoluble proteins, was recovered, collected and pooled in two groups: “control” and “diabetic”. The two pooling samples were directly analyzed by matrix-assisted laser desorption/ionization mass spectrometry (MALDI MS) [14], and the proteins detected were tentatively identified by comparison of their molecular weight with the Human Protein Reference Database, restricting the search to the species expressed in placenta tissue. At first sight this method seemed to lead to satisfactory results, with the detection in the m/z range 15,000–32,000 of: 39S ribosomal protein I.55, insulin–like peptide INSI.5, ergosterol biosynthetic protein 28, histone H3-like centromeric protein A, R-spondin-3 and mitocondrial dicarboxylate carrier. However, an in-depth analysis of these results showed the presence of relevant limits of this approach: the most abundant ionic species in the MALDI spectra were proved to be due to globins present in the maternal and fetal blood. Furthermore, an evaluation with MS/MS of the placenta samples omogenates subjected to trypsin digestion confirms this result. These findings focalize the attention that needs to be paid to avoid blood contamination of the placenta samples, and in the analysis of the data obtained from database comparison. The one-dimensional electrophoretic separation of the proteins present in the two pools was performed, followed by tryptic digestion of the proteins evidenced by the different bands (right part of Figure 1). With this accurate method, a large number of proteins in the mass range 15–220 kDa were found and, after digestion with trypsin, MALDI analysis made possible to identify a series of proteins (different from globins), with coverage values ranging from 34% to 78%. Densitometric analysis indicated a slightly higher optical density in the bands. This was due to a serine/arginine repetitive matrix protein 1 and Bcl2-associated transcriptor factor1 for the GDM pool with respect to the same bands in the control pool. These structural assignments were confirmed by MALDI MS/MS experiments, which in the case of samples from the diabetic pool, show also the presence of glyco-oxidized species, i.e., the products of non-ezymatic glycation and glycol-oxidation arising from the reaction of glucose with amino groups of proteins. It was noted that only minor quantitative differences were found between proteins for GDM and normal pregnancies; these data can be explained by the fact that the GDM women evaluated were in good metabolic control, showing only slightly elevated HbA1c values with respect to normal pregnant women. It could be emphasized that the analysis of a pool sample exhibits some limitations, giving a general view of the possible differences but lacking the aspects related to single subject. 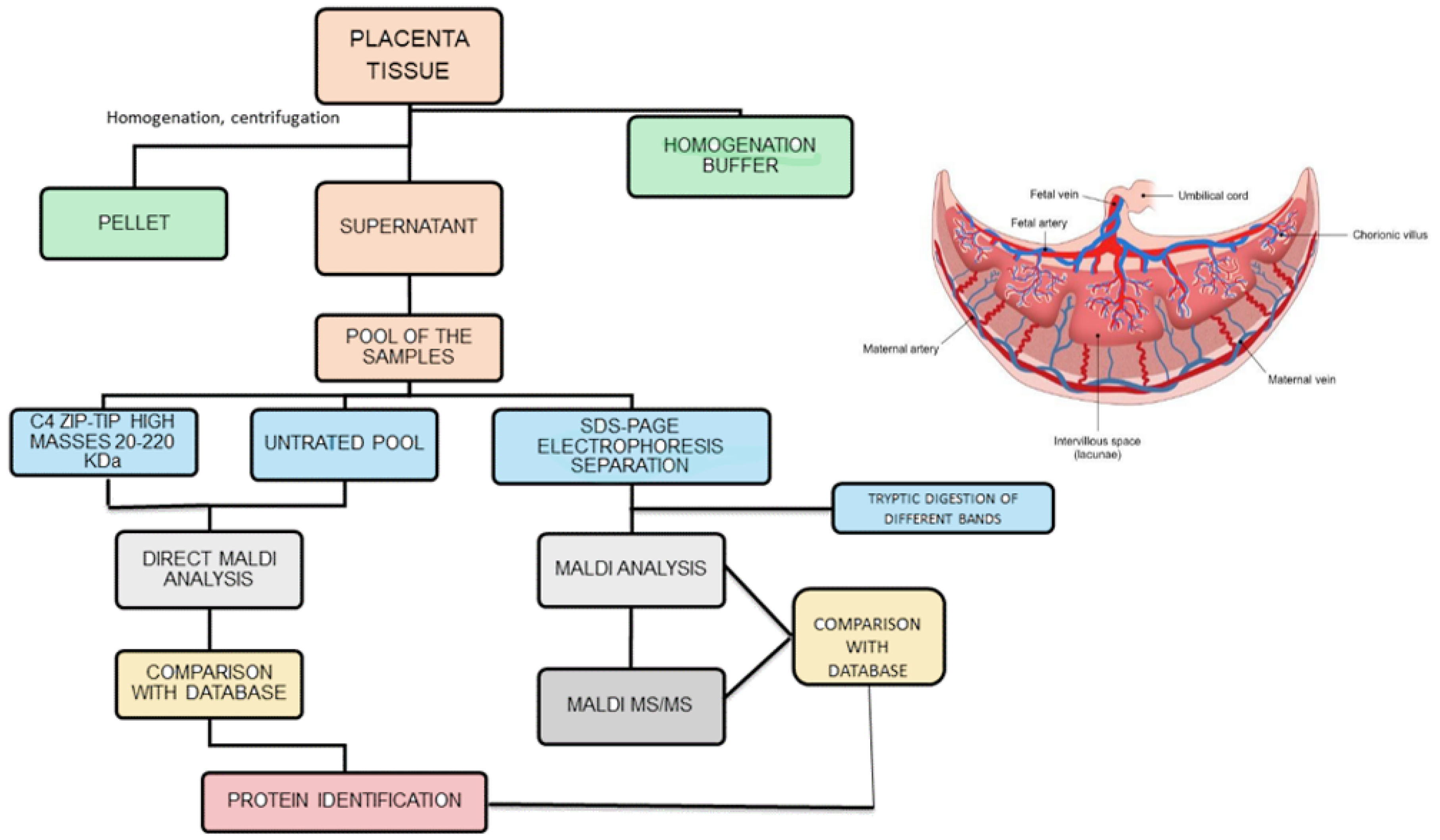 More
© Text is available under the terms and conditions of the Creative Commons Attribution (CC BY) license; additional terms may apply. By using this site, you agree to the Terms and Conditions and Privacy Policy.
Upload a video for this entry
Information
Subjects: Obstetrics & Gynaecology
Contributors MDPI registered users' name will be linked to their SciProfiles pages. To register with us, please refer to https://encyclopedia.pub/register :
Annunziata Lapolla
,
Pietro Traldi
View Times: 89
Revisions: 2 times (View History)
Update Time: 28 Sep 2022
Table of Contents
1000/1000
Hot Most Recent