Submitted Successfully!
Thank you for your contribution! You can also upload a video entry related to this topic through the link below:
https://encyclopedia.pub/user/video_add?id=27461
Check Note
2000/2000
Urban Middle-Class
Edit
Upload a video
This entry is adapted from 10.3390/urbansci6020032

With the rapid urbanization, the emergence of a middle class is exerting its influence on the urban form and structure. A data-driven approach based on principal component analysis (PCA) has been used to define multidimensionally the middle class and its housing typology.

Today, 57% of the world’s population lives in urban areas, a proportion that is expected to grow to almost 70% by 2050. Approximately 200,000 new city dwellers are added to the world’s population daily, which translates into 5 million new urban dwellers per month in the developing world and 500,000 in developed countries, there are nearly 1000 urban agglomerations with populations of 500,000 or more, three-quarters of which are in developing countries [1]. Urbanization rates are much faster in these countries as demonstrated by the growth rate in Africa, which is ten times higher than in Europe [1]. Urban areas have always been the world’s economic dynamos for centuries, attracting skilled workers and productive businesses and benefiting from economies of scale. Urbanization and per capita GDP tend to move in close synch as countries develop. The economic development leads to the emergence of a new middle class with incomes high enough to become significant consumers of goods and services [2].
As the fastest growing in the world, Africa’s urban middle class has tripled over the last 30 years. The potential of this growing urban middle class can lead to economic growth, human capital development, and poverty reduction [3][4]. Indeed, the large middle class in Africa can play a key role in supporting socio-economic resilience and socio-political stability [5]. It sustains consumption and drives much of the investment in good education, good health services, and decent housing. Societies with a strong and large middle class have lower crime rates; enjoy higher levels of trust and life satisfaction, as well as greater political stability and good governance [6]. According to the African Development Bank [3], the increase in size and purchasing power of Africa’s middle class has significantly helped reduce poverty and lift previously poor households into the middle class. Therefore, fostering the growth of the middle class has become one of the big challenges which must be met at the highest level of public priorities and interests to policymakers to reap its positive dividends and to make up the socio-economic development deficit in Africa. Designing appropriate and targeted urban policies that can help to expand the middle class and meet their real needs depends, first and foremost, on the exact determination of who falls into this social class and also an understanding of its influence on urban development.
Approaches used to define the middle class are very diverse, even kaleidoscopic, within and across disciplines. Many developed countries use income as a key indicator to define middle-class status, because they consider that income tends to be highly correlated with the other trappings of social class, such as economic security, education levels, and consumer preferences [6][7]. However, in developing countries, if the middle class is characterized by its ability to serve as a pillar of social and political stability, and the engine of economic development, it should not be a concern focused solely on income and the provision of basic needs; but should be a class carrier of, more than others, the values of democracy, equality, modernity, efficiency, and merit [3][5][8]. Therefore, the income or the level of consumption, alone, does not allow to define the parameters of a social class with these desired socio-economic specifications, especially since the median income is very low in African countries and cannot be widely spread [4][9]. Thus, the definition of the middle class must be based on observing the social strata living in satisfactory housing and depicting good socio-economic conditions.
The multidimensional approach, based on monetary and non-monetary attributes, seems to be an alternative to the income-based approach widely used in American and European countries. It has the advantage of taking into account the plurality of social class identification, and of giving priority to variables that can exactly differentiate the middle class. Once the middle class is defined and localized in multidimensional terms, it, therefore, becomes easier to design targeted housing policies and to study and track its impact on the housing market and its spatiotemporal evolution.

The dynamics of the middle class play a very important role as a catalyst for economic growth and human capital development. Their lifestyle is typically associated with certain goods, services, and modes of consumption in terms of housing, education, tourism, sport, and health services [7][10]. With this style, they improve not only their quality of life but also raise income levels for everyone in other social classes.
In terms of economic growth, Norman Loayza et al. (2012) proved that when the size of the middle class increases, social policy on health and education becomes more active, and the quality of governance regarding democratic participation and official corruption improves [11]. This does not occur at the expense of economic freedom, as an expansion of the middle class also implies more market-oriented economic policy on trade and finance [7][12].
Van Stel et al. 2005 show that the middle class also contributes to economic growth and capital accumulation as a source of entrepreneurship and innovation. In countries with more middle-income households, entrepreneurship activities tend to have a positive impact on GDP growth [13]. In this sense, a strong middle class is considered an important element to foster small and medium-sized enterprises and to grow a robust entrepreneurial sector [14]. Overall, it has been shown, in other studies, that economic growth is stronger in countries where the middle class is strong [15][16].
In terms of human capital, Duflo and Banerjee (2008) (2019 Nobel prize in Economics) and Brown and Hunter (2004) emphasize that the middle class allocate greater expenses to the education of their children and invest considerably in improving their knowledge and skills [17][18]. In doing so they participate in the improvement of human capital in the present and future. This will ensure the sustainability of well-being and adequate lifestyle for future generations, and consequently the improvement of current and future GDP per capita [14][15][19].
In terms of housing and urban configuration, many studies show that the rise of the middle class and its new demand for housing represents a tectonic shift in housing quality and urban structure and configuration. The middle-class lifestyle is typically correlated with certain living conditions, such as decent housing, and being secure, affordable, accessible, and close to urban centers [7].
The urban middle class now constitutes an important new market and a major source of revenue for local and global companies. In the future, people are likely to see brands and strategies specifically targeted at this new consumer group [20][21][22].
In China, for example, Choon-Piew (2012) demonstrates how middle-class gated communities have reshaped the urban landscape with the creation of a new territorialization of privilege, lifestyle, and private property [23]. Some scholars have further argued that middle-class housing like gated communities is an effective and innovative way of organizing urban structures. This type of housing has become a part of the state’s urban/national developmental agenda in Singapore for example and is less socially and spatially divisive than those depicted elsewhere [24].
In Latin America, a range of studies have revealed that the middle income exerts its influence on the housing and the urban configuration. Gated communities with private safety schemes, a pool, and private parking systems are the preferred model for the emerging middle class [25][26], this has created a new urban configuration that divides the cities into two distinct blocs: settlement for the poor and gated communities for middle and upper class [25][27][28][29].
In Africa, many studies, in Sudan and Tanzania for example, state that the expanding middle-income fuels demand for formal and well-located housing, public utilities, infrastructure, and services [30][31][32]. It is worth noting that, due to this new demand, companies that design and promote satellite cities have changed their strategies in order to best accommodate the expanding African middle class. Therefore, urban policies targeting this social class in Africa need first to understand their preferences and their financial capacity of payment services such as decent and well-located housing. The adoption of smart city and smart home concepts can be a good alternative for companies to attract and expand the middle class by offering a good quality of life and enhancing efficiency at a lower cost [33][34]. 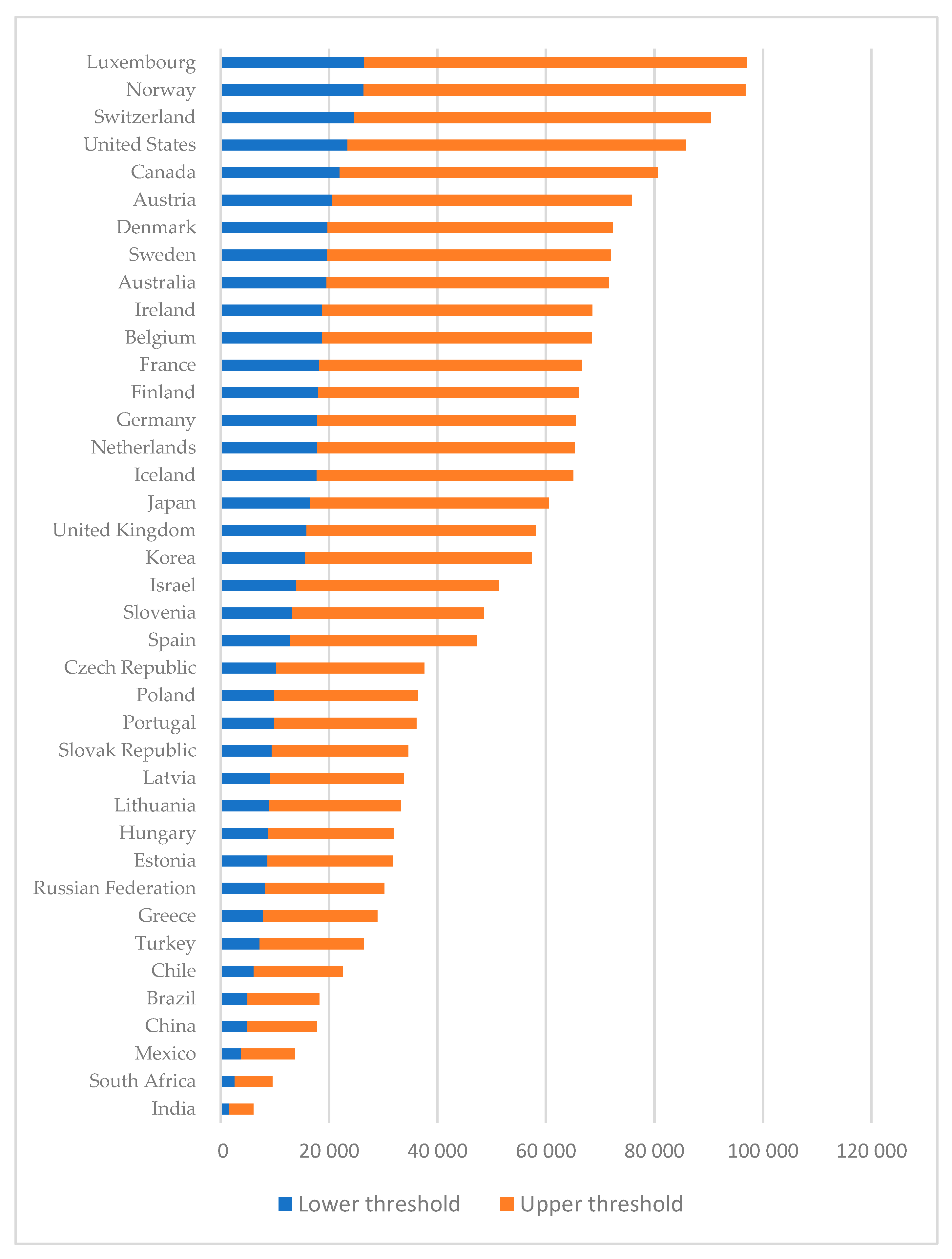 Figure 1. Middle-income thresholds in OECD countries and selected emerging economies. Note: Middle-classes and median incomes are defined relative to equivalised household disposable income. The middle-income class comprises individuals in households with incomes of between 75% and 200% of the median [6].
The World Bank uses the absolute approach based on the income thresholds to determine the middle class in the emerging economies of Latin America and the Caribbean. It sets lower and upper thresholds of USD 10 and 50 per day, adjusted for international differences in purchasing power [38]. Indicators based on absolute amounts are intuitive and easily understandable by the public. However, they are more suitable for emerging economies, where analyses of absolute living standards are more widely used.
The African Development Bank and the Asian Development Bank have also chosen an absolute measure, defining the middle class as the class made up of people whose consumption expenditures range between USD 2 and 20 in 2005. The African Development Bank divides the middle class into three sub-groups: (1) the lower-middle class, which ranges from individuals consumption between USD 2 and 4 per day, a rate that exceeds very slightly the poverty line in developing countries, making this the first group vulnerable to external shocks; (2) the middle class with consumption ranging between 4 and 10 dollars per day, a category of the population that lives above the level of essential needs and is, therefore, able to save and consume basic goods; (3) the upper-middle class, whose consumption ranges between USD 10 and 20 per day. In addition, the African Development Bank uses a different definition depending on the level of income of the country concerned: between UDS 2 and 10 for poor countries, and between USD 10 and 20 for middle countries.
Although these approaches are based on simple economic definitions, it does not take into account the socio-economic characteristics usually associated with the middle class in many countries (education, lifestyle, occupation, decent housing). In addition, there is a risk of classifying as middle-class people that belong to the poor class according to the absolute approach specifically in developing countries [5]. Deloitte for example is cautious on the definition of a middle class used by the African Development Bank. It considers that it is difficult to imagine how households with such minimal purchasing capacities can afford decent housing as well as the vehicles needed to move around the city, and it may be that prospective property developers are seriously misreading the African market [4].
In Africa and developing countries in general, many constraints make it difficult to define the middle class, based on the income or consumption level. Recent studies highlight that the lack of regularly updated data on the middle class, the weakness of the statistical framework for tracking salaries in the private sector, the size of the informal sector, and the weakness of statistics related to it, all constitute major difficulties that hinder an effective and precise definition of the middle class in these countries.

More
© Text is available under the terms and conditions of the Creative Commons Attribution (CC BY) license; additional terms may apply. By using this site, you agree to the Terms and Conditions and Privacy Policy.
Upload a video for this entry
Information
Subjects: Urban Studies
Contributors MDPI registered users' name will be linked to their SciProfiles pages. To register with us, please refer to https://encyclopedia.pub/register :
Hicham Mharzi Alaoui
,
Hassan Radoine
,
Jérôme Chenal
,
Hassan Yakubu
,
Salwa Bajja
View Times: 98
Revisions: 2 times (View History)
Update Time: 22 Sep 2022
Table of Contents
1000/1000
Hot Most Recent