+1 point
Thank you for your contribution! You can also upload a video entry related to this topic through the link below: https://encyclopedia.pub/user/video_add?id=27414
Check Note
2000/2000
MicroRNA-21 in Cancer

MicroRNAs (miRNAs) are small noncoding RNAs that play an important role in regulating gene expression at a posttranscriptional level. As one of the first discovered oncogenic miRNAs, microRNA-21 (miR-21) has been highlighted for its critical role in cancers, such as glioblastoma, pancreatic adenocarcinoma, non-small cell lung cancer, and many others. MiR-21 targets many vital components in a wide range of cancers and acts on various cellular processes ranging from cancer stemness to cell death. Expression of miR-21 is elevated within cancer tissues and circulating miR-21 is readily detectable in biofluids, making it valuable as a cancer biomarker with significant potential for use in diagnosis and prognosis.

1. MicroRNA-21 and Its Role in Cancer

Among the many miRNAs that have been associated with cancer progression, microRNA-21 (miR-21) was among the first to be identified as an oncogenic miRNA or “oncomiR”. Located on chromosome 17q23.2 in the intron of the transmembrane protein 49 (TMEM49)/vacuole membrane protein 1 (VMP1) gene, miR-21 was observed to have a unique, highly conserved promoter region that is activated by activation protein 1 (AP-1) in conjugation with the switch/sucrose non-fermentable (SWI/SNF) complex and Ets-related protein PU.1, CCAAT/enhancer binding protein (C/EBP), nuclear factor I (NFI), serum response factor (SRF), p53, and signal transducer and activator of transcription 3 (STAT3) [1][2]. Alteration of miR-21 expression has been linked to epigenetic factors and the dysregulation of transcriptional and posttranscriptional regulators, whether during biogenesis or through repression, resulting in oncogenic phenotypes (Figure 1).

2. MicroRNA-21 as a Biomarker in Cancer

MiRNAs are stably detectable in the plasma and serum, and thus may be developed as molecular biomarkers for minimally invasive tool in cancer diagnosis and prognosis [26][27]. MiRNAs can exist in biofluids as either a part of an extracellular vesicle (EV) or a non-vesicle-associated ribonucleoprotein complex and can be used to distinguish patho-logies at various stages of disease progression [28]. Given that miR-21 is highly expressed in a wide variety of cancers and linked to several oncogenic characteristics, it has been evaluated as a diagnostic and prognostic cancer biomarker [29][30][31][32][33][34].
Toiyama and colleagues found that serum miR-21 levels were significantly higher in patients with adenomas and CRC. Furthermore, high miR-21 expression in the serum and tissues could be associated with tumor size, metastasis, and patient survival [35]. Exosomal miRNA profiling of ovarian cancer patients showed that miR-21, miR-141, miR-200a, miR-200b, miR-200c, miR-203, miR-205, and miR-214 were significantly elevated and could be used to distinguish patients from healthy individuals [36]. MiR-21 may even be useful in rare cancers with few available biomarkers. In leptomeningeal metastasis (LM) patients, miR-21 expression was monitored using EVs extracted from cerebrospinal fluid (CSF) and found that aberrant miR-21 expression correlated with patient survival [37][38][39].
The potential use of miRNA as diagnostic or prognostic factors has become increasingly important as accessibility to big data continues to improve. Databases and tools such as Circulating MicroRNA Expression Profiling (CMEP) and CancerMIRNome can help researchers identify miRNAs of interest in a variety of cancers and give a preliminary picture of their clinical significance [16][40].
The use of high-throughput visualization tools, such as BioGRID, could help researchers identify interactions between miR-21 and cellular protein partners, providing further insight into the role of miR-21 (Figure 3) [41][42]. In addition, predictive tools such as miRcode can be used to identify potential lncRNA-miRNA interactions, although it should be noted that these tools require more experimental validation [43][44]. It is still evident that there may be an underlying intricate network of mRNA-miRNA-lncRNA in disease progression that has yet to be explored. Improvements in a sensitive and live detection system for particular miRNAs such as miRDREL could also help illustrate a clearer picture of the action mechanism of oncomiRs such as miR-21 [45]. 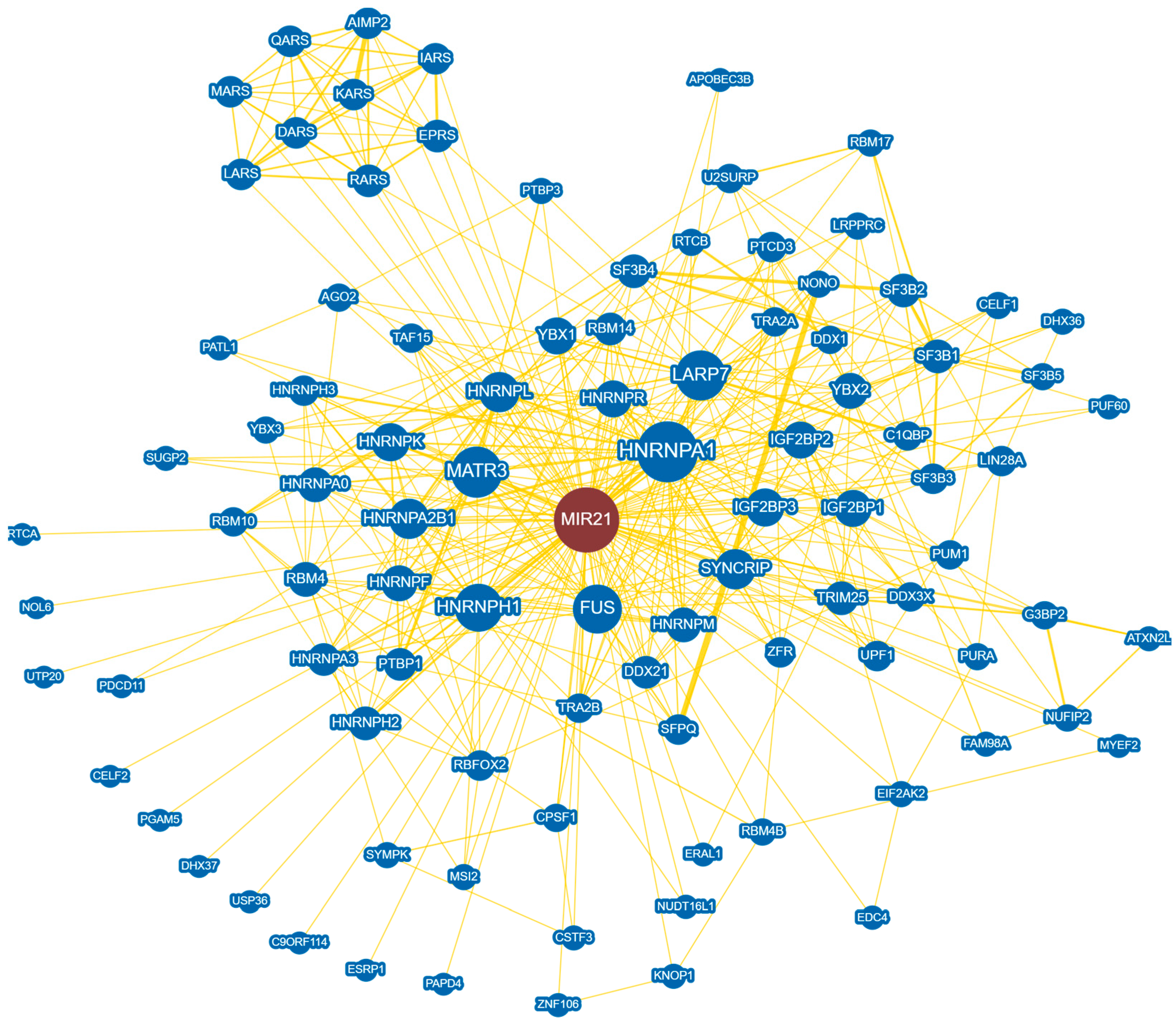 Various studies have explored the possibility of targeting miR-21 with RNA-mediated therapeutics such as antisense oligonucleotides (ASO), locked nucleic acid (LNA)-anti-miRNAs, and most recently synthetic or natural circRNA, which act as miRNA sponges (Table 1).
Table 1. Therapeutic approaches of miR-21 targeting in cancers.
ASOs are single-stranded RNAs that are complementary to a specific target RNA, especially miRNAs [59]. In pancreatic cancer cells, delivery of ASO-miR-21 suppressed the epithelial-mesenchymal transition and hindered proliferation. Furthermore, co-delivery of ASO-miR-21 with gemcitabine, a first-line drug for the treatment of locally advanced or metastatic pancreatic cancer acted synergistically in inducing apoptosis and growth inhibition [60][61]. Various in vivo studies utilizing miR-21 ASOs have yielded tumor growth inhibition in myeloma, HCC, glioblastoma multiforme (GBM), and breast cancer, demonstrating its therapeutic potential [62][63][64][65].
LNA technology “bridges” the 2′-O and 4′-C atoms in the ribose structure of RNA nucleotides, and is thus capable of improving the hybridization stability and specificity of anti-miRNAs [66][67]. In CRC, the application of LNA-anti-miR-21 was shown to effectively inhibit growth and induce apoptosis, demonstrating the clinical potential of using LNA for miRNA-targeting therapeutics [46]. Furthermore, fully LNA-modified phosphorothioate oligonucleotides or “tiny LNAs” (8-mer-long) were reported to target the seed regions of Ago2-bound miR-21 [68].
Chu and colleagues demonstrated that this technology could be applied in vivo through the systemic administration of LNA-miR-21 inhibitors to KPC mice expected to have low-grade pancreatic intraepithelial neoplasia 1 (PanIN-1) lesions. Mice that received LNA-miR-21 did not show disease progression, which demonstrates that LNA-miR-21 inhibitors could effectively interfere with malignant progression [6].
CircRNAs have been observed to play a variety of roles such as transcriptional regulation through interaction with U1 snRNP, or functional regulation through protein interactions as in the case of circFOXO3 [69][70]. Although other linear RNAs can also act as competing endogenous RNA (ceRNA), circRNAs are advantageous in structural stability and conservation which have led to growing interest in circRNAs in therapeutic applications [71]. In addition, circRNAs are capable of acting as ceRNA through miRNA sponging [72]. MiRNA sponges have also been shown to effectively regulate miR-21 in vitro [73][74]. Recently, both synthetic and natural circRNAs were found to act as effective miRNA sponges against miR-21 [75].
In NSCLC, natural circRNA (c0001287) sponged miR-21 to upregulate PTEN and thereby inhibit proliferation and metastasis [76]. Liu and colleagues created a synthetic circRNA to sponge miR-21 and found that the inhibition of miR-21 through this method could suppress gastric carcinoma cell proliferation by downregulating death domain-associated protein DAXX [57]. Interestingly, Muller and colleagues delivered polyethyleneimine (PEI) nanoparticles containing circular miR-21-5p decoys through intraperitoneal injection in subcutaneous xenograft mice and found significant potency in inhibiting tumor growth in vivo [77]. Thus, the importance of circRNA can be shown in its therapeutic potential in cancer treatment.
Recently, Wang and colleagues developed a method to simultaneously sponge miR-21 and deliver a chemotherapeutic drug. In this system, an oligonucleotide shell of a spherical nucleic acid of gold nanoparticles loaded with doxorubicin was shown to capture miR-21/miR-155, and thereby trigger the release of doxorubicin to enable tumor-specific chemotherapy [78].

More
© Text is available under the terms and conditions of the Creative Commons Attribution (CC BY) license; additional terms may apply. By using this site, you agree to the Terms and Conditions and Privacy Policy.
Upload a video for this entry
Information
Subjects: Biochemistry & Molecular Biology
Contributors MDPI registered users' name will be linked to their SciProfiles pages. To register with us, please refer to https://encyclopedia.pub/register :
Jiho Rhim
,
Woosun Baek
,
Yoona Seo
,
Jong Heon Kim
View Times: 157
Revisions: 2 times (View History)
Update Date: 21 Sep 2022
Table of Contents
1000/1000
Hot Most Recent