+1 point
Thank you for your contribution! You can also upload a video entry related to this topic through the link below: https://encyclopedia.pub/user/video_add?id=27398
Check Note
2000/2000
Risk Factors between Dementia and Atherosclerotic Cardiovascular Disease

Dementia is a clinical diagnosis defined by cognitive symptoms that interfere with the ability to function at usual activities [1]. It is a devastating neurodegenerative disease affecting more than 50 million individuals worldwide [2]. The most common symptoms are problems with memory, language, problem solving, and other thinking skills [3], and it is preceded by a period during which individuals have subtle cognitive changes called mild cognitive impairment (MCI) [3]. The dementia syndrome is categorized as mild, moderate, or severe [3].
Alzheimer’s disease is the most common form of dementia, and the prodromal phases of Alzheimer’s disease can last for decades [4]. The disease is categorized as early-onset (before age 65) and late-onset (after age 65) dementia [5]. It has been viewed as a mysterious disease with no single obvious cause, different hypotheses regarding its pathogenesis, and no curative treatment. Even though β-amyloid is the pathological hallmark of Alzheimer’s disease, the amyloid cascade hypothesis that states Alzheimer’s disease is mainly caused by the accumulation of toxic β-amyloid [6] has been challenged several times. Clinical randomized trials aimed at reducing the β-amyloid burden have failed to show any effect on disease endpoint [7][8][9][10][11], and β-amyloid plaques have been shown to be present in cognitively normal individuals [12] and individuals without dementia [13].
Vascular dementia is the second most common form of dementia and is distinguished from Alzheimer’s disease by evidence of previous stroke or hemorrhage and current cerebrovascular disease [3]. Other types of dementia include frontotemporal [14], Lewy body dementia [15], unspecified dementia [3], and mixed dementia [3]. Many of the types of dementia in the unspecified dementia category are likely to be of vascular origin, and therefore, unspecified dementia and vascular dementia are often categorized as non-Alzheimer dementia [16][17]. This classification will be used throughout the review.
Recent evidence indicates that curing or reverting Alzheimer’s disease in the prodromal phases or after disease onset is futile. In contrast, preventing the disease by lifestyle interventions early in life with a focus on reducing cardiovascular risk factors is a promising strategy for reducing the future risk of dementia [16][18]. One study estimated that approximately 40% of dementia cases worldwide could be prevented by targeting modifiable, primarily cardiovascular risk factors [2]. Furthermore, neuroimaging studies have suggested that early vascular dysregulation is the initial pathologic event leading to late-onset Alzheimer’s disease [19][20].

General diagnostic criteria for dementia according to the International Classification of Diseases (ICD) version 10 include: (1) decline in memory and decline in other cognitive functions, (2) preserved consciousness sufficient to be able to judge decline in memory, (3) weakening of emotional control, motivation, or social interaction, (4) duration of more than 6 months. In addition, the symptoms must not be explained by other major psychiatric disorders [3]. Dementia has many causes, and Alzheimer’s disease and vascular dementia are the two most common. A diagnosis of either form of dementia is based on family and medical history, cognitive tests such as the Mini-Mental State Examination (MMSE), and input from close relatives about the patient’s changes in behavior, abilities, and/or mood [3][4].
Alzheimer’s disease was first described in 1907 by Alois Alzheimer [21]. The post-mortem examination of the patient’s brain was described with arteriosclerotic changes in the vascular tissues and thick bundles of neurofibrils that stained with dyes that normally would not stain neurofibrils (later known as neurofibrillary tangles) [21]. Biomarkers can be used to distinguish Alzheimer’s disease from other types of dementia [4]. These include early signs of Alzheimer’s disease such as abnormal levels of β-amyloid shown either by examination of cerebrospinal fluid or in positron emission tomography (PET) scans and decreased glucose metabolism shown on PET scans [4].
Vascular dementia has different causes which can be classified according to the following [22]: multiple infarcts, strategic single-infarct, small-vessel disease with dementia, hypoperfusion, hemorrhagic dementia, and other causes [22]. Alzheimer’s disease and vascular dementia share many clinical features and their differential diagnosis requires brain imaging and or/postmortem assessment [23]. The pathological characteristics of vascular dementia are microinfarcts, lacunar infarcts, arteriosclerosis, lesions caused by hemorrhages, fibroid necrosis, and hyalinosis [23]. While all these features can also be seen in Alzheimer’s disease, the pathological hallmark of Alzheimer’s disease is the accumulation of β-amyloid [23][24]. When β-amyloid accumulates in the capillaries of the brain it causes cerebral amyloid angiopathy, which is very often seen in Alzheimer’s disease and often causes cerebral hemorrhages [24]. Cerebral amyloid angiopathy is also present in vascular dementia, however, amyloid plaques are rarely seen [24]. 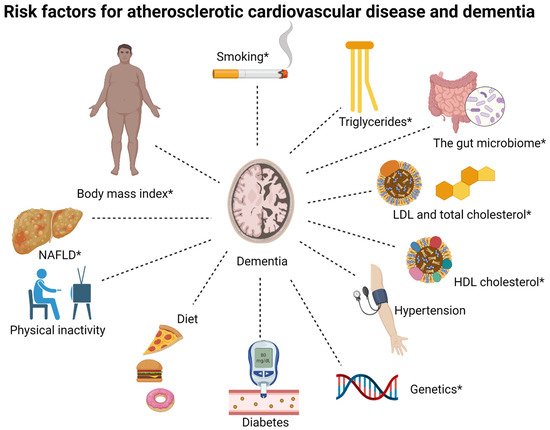 More
© Text is available under the terms and conditions of the Creative Commons Attribution (CC BY) license; additional terms may apply. By using this site, you agree to the Terms and Conditions and Privacy Policy.
Upload a video for this entry
Information
Subjects: Cardiac & Cardiovascular Systems
Contributors MDPI registered users' name will be linked to their SciProfiles pages. To register with us, please refer to https://encyclopedia.pub/register :
Liv Tybjærg Nordestgaard
,
Mette Christoffersen
,
Ruth Frikke-Schmidt
View Times: 156
Revisions: 2 times (View History)
Update Date: 21 Sep 2022
Table of Contents
1000/1000
Hot Most Recent