+1 point
Thank you for your contribution! You can also upload a video entry related to this topic through the link below: https://encyclopedia.pub/user/video_add?id=27292
Check Note
2000/2000
Microbial Technologies Applied Biofuel Production

The use of fossil energy sources has a negative impact on the economic and socio-political stability of specific regions and countries, causing environmental changes due to the emission of greenhouse gases. Moreover, the stocks of mineral energy are limited, causing the demand for new types and forms of energy. Biomass is a renewable energy source and represents an alternative to fossil energy sources. Microorganisms produce energy from the substrate and biomass, i.e., from substances in the microenvironment, to maintain their metabolism and life. However, specialized microorganisms also produce specific metabolites under almost abiotic circumstances that often do not have the immediate task of sustaining their own lives. Microorganisms can change the current paradigm, energy–environment, and open up countless opportunities for producing new energy sources, especially hydrogen, which is an ideal energy source for all systems (biological, physical, technological). Developing such energy production technologies can significantly change the already achieved critical level of greenhouse gases that significantly affect the climate.

The basic feature of life is oxidoreduction, which creates energy from matter [1]. However, some microorganisms can embed solar energy in very complex mechanisms of production of low-energy compounds from so-called nature pollutants caused by natural pollutants created by the technology of processing oil, sugar cane, and natural oils (harmful technologies) [2]. In addition to photosynthesis, some microorganisms, such as cyanobacteria, can decompose water into the desired oxygen and even more desirable hydrogen, and some can directly produce hydrogen via anaerobic processes [3]. Some, in turn, can convert classic environmental pollutants into very highly potent energy compounds (methane, alcohol) [4]. Thus, the genotypic and phenotypic traits of many species of microorganisms can direct the production of energy products to more perfect and efficient technologies and environmental purifiers [5].
Current technologies of energy production (energy) are a big problem (technical, environmental, and financial), because in addition to environmental pollution, they require significant investment (initial research, adaptation of new technologies, remediation as the final stage of production) [6]. However, natural pollutants (in terms of quantities, environmental impact, and permanent need for disposal) significantly reduce the benefits of conventional energy from fossil fuels (oil, gas, coal) and represent a subsequent often unsolvable problem of the remediation of CO2, NO2, SO2, and other oxides [7]. Technologies are being developed to use waste products (biorefinery) to produce renewable energy, as they permanently pollute the environment in the repeated energy production cycle [8]. Thus, microorganisms are undoubtedly crucial in developing waste purification and use strategies [9]. Bioenergy research is the center of scientific and technological research in the strategy of finding cost-effective biorefineries [10] as a way out of the current high level of air, water, and soil pollution to find photosynthetic and non-photosynthetic microorganisms that can produce clean energy (directly) or clean hydrogen [11].
An increasingly common research target of potential raw materials for biofuel production is microalgae obtained from adjusted wastewater. However, this may also significantly impact the environment, especially when compared with other renewable energy sources [12]. This can be particularly important when disposing of farm wastewater, representing an increasing environmental issue [13].

The main reason for the increased interest in biomass as an energy source is the application contribution to the sustainable development paradigm. In addition, biomass sources are often present at the local level, and conversion into biofuel is possible with low initial costs [14]. Per the Renewable Energy Directive (EU Directive 2018/2001) [15], a common framework for the promotion of energy from renewable sources in the EU was established, setting a binding target for final gross consumption in the EU, with the total share of energy from renewable sources having to be 32% by 2030. This directive also promotes using non-food crops to produce biofuels and limits the number of biofuels and bioliquids produced from food or animal feed [15][16]. Methane is the so-called greenhouse gas produced indirectly by organic waste landfills (mainly in anaerobic processes) [17] and directly produced by all living beings (especially ruminants) [18]. There are two known sources of methane production: biological and non-biological. Non-biological methane is formed as a result of some geological processes. However, most methane (over 90%) is produced by the action of microorganisms and is a biological way (source) of methane production. This process of biological methane production is called methanogenesis, and microorganisms that carry out the same process are called methanogens [19][20]. Methanogens belong to the Archaea domain, which differs from bacteria because they do not possess peptidoglycan in the cell wall. Still, in Methanosarcina, it is a protein; in Methanosarcina, it is a heteropolysaccharide; and in Methanobacterium and Methanobrevibacter, it is replaced by pseudomurein [21]. The most crucial methanogen in the rumen is Methanobacteriales ruminantium, which contains pseudomurein in its cell wall. It needs formate, coenzyme M, hydrogen, and carbon dioxide for methane production [22]. For the process of methanogenesis, coenzymes F420, M, and HSHTP and lipids that methanogens have as cofactors are essential [23]. Cofactor F420 is necessary for the activity of hydrogenase as well as the formation of dehydrogenase enzymes, while coenzyme M acts as a terminal methyl carrier in the process of methanogenesis [24].
It is estimated that microorganisms annually produce and consume about one billion tons of methane [25]. However, the methane removal process can also occur in biological and non-biological ways. The most significant is the non-biological pathway in the Earth’s atmosphere (specifically, the troposphere and stratosphere), where various chemical reactions under ultraviolet radiation decompose methane. In chemical reactions, the issue is associated with the breaking of the covalent bond in methane–carbon-hydrogen, which is one of the strongest bonds among all hydrocarbons [26]. Regardless, methane is used in a process called the catalytic steam reforming of methane, where methane is first converted into synthetic gas, i.e., into a mixture of hydrogen and carbon monoxide. Then, it serves as a raw material for producing hydrogen, methanol, and other chemicals, where the catalyst is nickel, and the reaction takes place at temperatures from 700 °C to 1100 °C [27].
Pyrolysis is the process of burning methane, in which formaldehyde (HCHO or H2CO) is formed in the first step, to which the HCO radical is added, after which carbon monoxide (CO) is formed [28].
The photocatalytic oxidation of methane is similar to the natural atmospheric process that oxidizes CH4 to CO2 [29]. Ultraviolet light is used to split the oxygen molecule into two free radicals that react with methane to produce products such as CH3OOH, CH3OH, HCOOH, CO2HOCH2OOH, and water. In photocatalytic reactors, catalysts increase the formation of free radicals and thus the rate of the methane reaction [30].
CH4 + O2 → CO + H2 + H2OCH4 + H2O → 700–1100 °C NiCO + 3H2
Unlike non-biological methods, biological methods of methane decomposition are carried out by the action of microorganisms called methanotrophs, and the process is named methanotrophy [19] (Figure 1). Methanotrophs can use methane to produce methanol, and Geobacter sulfurreducens and Shewanella oneidensis can use the mechanism of specific electron transfer from the membrane’s outer surface to visible surfaces. This phenomenon can be used in bioelectrochemical devices to produce biohydrogen [31]. In addition, methanotrophs have a significant role in reducing the production of large amounts of greenhouse gases via their formation below the surface of the Earth (below the ground) and the utilization of methane produced in the soil conversion of methane emissions into the atmosphere [32][33]. Methane oxidation begins with reducing oxygen to peroxide and then to methanol with the action of the monooxygenase enzyme (MMO) [34]. 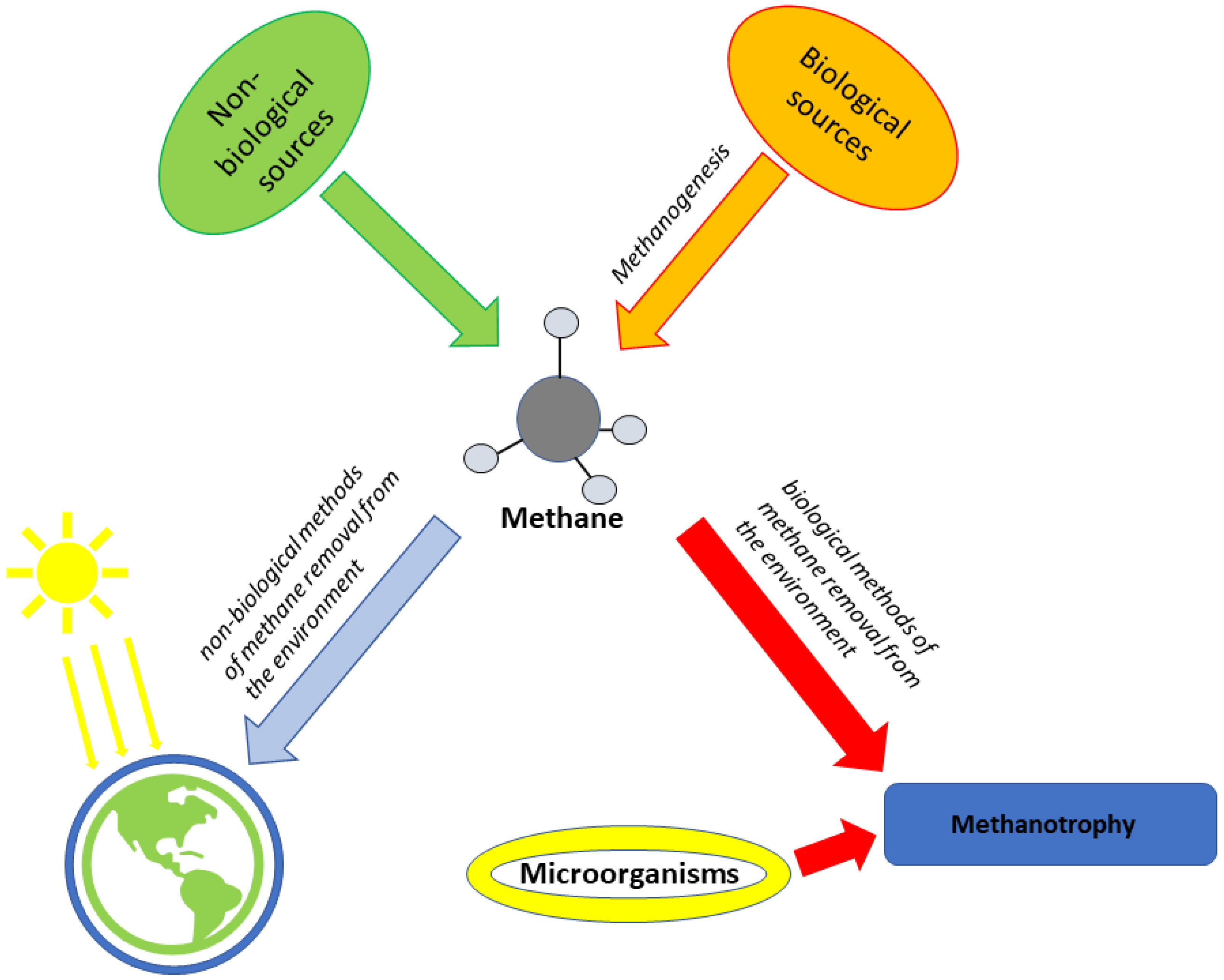 Figure 1. The process of formation and decomposition of methane via biological and non-biological means.

The biggest challenge in employing microorganisms to produce biofuels is producing a considerable amount of fuel more cheaply and efficiently than traditional fossil fuels. To replace petrol with bioethanol should be cheaper, which is very demanding to cover the necessary daily quantities. For example, in the USA, about 19 million barrels of petrol are consumed daily, and producing this amount on an industrial scale is challenging. Therefore, future biofuel productivity should be prioritized to increase microbial biofuel’s acceptability [35]. Some of the most common advantages and disadvantages of the biofuel production process are shown in Table 1. Due to the politically increasingly unstable oil market, many countries are turning to renewable energy sources. Biofuels (bioethanol and biodiesel) are a sustainable energy source due to their high chemical similarity, carbon neutrality, and comparable energy content, and microorganisms are crucial to their synthesis. Depending on the feedstock’s evolutionary hierarchy and the manufacturing technique, biofuels are divided into four generations. Biofuel production advances with each generation toward achieving sustainability and financial success in energy production. They are created to most effectively address the issues of the energy crisis, pollution, global warming, and waste management. Microorganisms used to be mere biomass decomposers, but because of advancements in biotechnology, gene editing, and synthetic biology, they now produce biofuel [36].
Table 1. Advantages and disadvantages of biofuel production.
The production processes for the second and third generations of biofuels are quite complex, which results in high energy costs. Additionally, the feedstock for the third generation has very complex requirements for structure, storage, and content. The expenses mentioned above explain the capital intensity of manufacturing second- and third-generation fuels, respectively, and the decision by most nations to choose first-generation biofuels [42]. The microbial lipids produced by microorganisms are the ideal feedstock for biodiesel synthesis due to their high production rate and independence from environmental conditions such as soil and climate. In the study by Wang et al., several ideas for generating biodiesel using microbes from inexpensive lignocellulosic biomass are addressed [38]. A country that intends to develop alternative fuels must have enough land to prevent a food shortage and enact stringent controls limiting the proportions of raw materials provided to the food and fuel markets. The ratios in which a blend of biodiesel with diesel and bioethanol with petrol can be created must also be governed by state standards. Developing second- and third-generation biofuel production, which uses significantly less land and is mostly not arable, despite having a higher capital during production, needs help and subsidies [42].

More
© Text is available under the terms and conditions of the Creative Commons Attribution (CC BY) license; additional terms may apply. By using this site, you agree to the Terms and Conditions and Privacy Policy.
Upload a video for this entry
Information
Subjects: Energy & Fuels
Contributors MDPI registered users' name will be linked to their SciProfiles pages. To register with us, please refer to https://encyclopedia.pub/register :
Jasminka Talapko
,
Domagoj Talapko
,
Anita Matić
,
Ivana Škrlec
View Times: 190
Entry Collection: Environmental Sciences
Revisions: 3 times (View History)
Update Date: 20 Sep 2022
Table of Contents
1000/1000
Hot Most Recent