+1 point
Thank you for your contribution! You can also upload a video entry related to this topic through the link below: https://encyclopedia.pub/user/video_add?id=27270
Check Note
2000/2000
Typical and Atypical Optic Neuritis

Optic neuritis (ON) is an inflammatory condition involving the optic nerve. Several important typical and atypical ON variants are now recognized. Typical ON has a more favorable prognosis; it can be idiopathic or represent an early manifestation of demyelinating diseases, mostly multiple sclerosis (MS). The atypical spectrum includes entities such as antibody-driven ON associated with neuromyelitis optica spectrum disorder (NMOSD) and myelin oligodendrocyte glycoprotein antibody disease (MOGAD), chronic/relapsing inflammatory optic neuropathy (CRION), and sarcoidosis-associated ON. Appropriate and timely diagnosis is essential to rapidly decide on the appropriate treatment, maximize visual recovery, and minimize recurrences.

Optic neuritis (ON) is an inflammatory condition involving the optic nerve but is far from being a uniform condition, and several important variants are now recognized that can be stratified into typical and atypical forms. Typical, ON usually manifests in young adults, especially women, between 18 and 45 years of age, and can be idiopathic or represent an early manifestation of demyelinating diseases, mostly multiple sclerosis (MS). The atypical spectrum includes entities such as neuromyelitis optica spectrum disorder (NMOSD), myelin oligodendrocyte glycoprotein antibody disease (MOGAD), chronic/relapsing inflammatory optic neuropathy (CRION), and sarcoidosis-associated ON, and in all of these, the clinical presentation, visual prognosis, and recurrence risk differ from typical ON. Importantly, optimal treatment approaches are also not uniform, making it essential to more accurately differentiate these entities based not only on their clinical presentation but also their pathogenesis.

Optic neuritis (ON) is an inflammatory condition involving the optic nerve, manifested usually in young adults, especially women, between 18 and 45 years of age [1]. The majority of the cases are idiopathic, but ON can be associated with demyelinating diseases, most commonly multiple sclerosis (MS). Optic neuritis represents one of the most frequent phenotypes of MS relapse, and occurs as the first demyelinating event in about one out of three MS patients [2]. MS is characterized by the presence of plaques that form in the CNS in combination with inflammation, demyelination, axonal injury, and axonal loss. The plaques are located primarily in the white matter of the brain, spinal cord, and optic pathways, but there is also involvement in the gray matter [3][4]. Depending on their stage of development, they contain varying proportions of immune cells and immunoreactive substances [5]. Plaques are expressed in all forms of MS, but vary over time quantitatively and qualitatively, showing a profound heterogeneity in the structure and immunopathological patterns of demyelination and oligodendrocyte pathology between relapsing-remitting and progressive forms of MS [6]. MS likely represents a T-cell-mediated autoimmune disorder with a predominance of CD8+ cells. The dominant theory is that inflammatory lesions in MS consist mainly of CD8+ and CD4+ T cells, and activated microglia and macrophages [7][8]. There is evidence regarding the suppression of functions that restricts CD4+ T-cell responses, and the tissue-damaging role of CD8+ T cells is reported to co-localize with axonal pathology [9][10]. Experiments in humanized transgenic mice showed that the specific interaction of CD8+ T cells with target cells requires MHC-I expression, which is tightly regulated in neurons and MHC-I molecules, only in response to danger signals such as pro-inflammatory cytokines IFN-γ or TNF-α [9]. However, the role of B cells has also become apparent, as evidenced, for instance, by the effectiveness of B cell inhibition as an MS disease-modifying therapy (DMT).

In the acute phase, ON pathology is characterized by optic nerve abnormalities and inflammatory demyelination. More specifically, predominant T cell, B cell, and glial cell activation within the nerve increases pro-inflammatory cytokines, leading to the activation of microglia and monocyte-derived macrophages, and further recruitment of CD4− and CD8+  T cells [11]. The subsequent inflammation leads to demyelination, reactive gliosis, and axonal death [12]. Pro-inflammatory cytokines and cytotoxic factors target myelin-producing oligodendrocytes (OLGs) and oligodendrocyte precursor cells (OPCs), causing apoptosis and exacerbating axonal demyelination [13][14][15][16]. Mature OLGs that survive demyelination are unable to produce new myelin sheaths. Remyelination, therefore, requires the migration and regeneration of oligodendrocytes from OPCs [17].
It is worth noting that the acute inflammatory lesions of the afferent visual pathway cause retrograde degeneration of retinal ganglion cells (RGCs). It has been demonstrated that RGC loss is associated with a reduction in post-synaptic proteins and neurite projections, and with persistent microglia and astroglia activation in the inner retina with high levels of iNOS (inducible nitric oxide synthase), IL (interleukin)-1α, TNF (tumor necrosis factor)-α, and C1q (complement component 1q) [15]. Thus, the development of therapeutic agents should focus on anti-inflammatory, anti-apoptotic, and remyelinating mechanisms to achieve neuroprotection and neuro-regeneration in the optic nerve and retina.

5.1. Mechanisms of Action in Interferon β in MS and Optic Neuritis

Interferons (IFNs) have been recruited as a potential therapeutic option for MS based on their immunomodulatory and antiproliferative properties [45]. It is believed that IFNs act via several overlapping mechanisms such as the down-regulation of the major histocompatibility complex (MHC) class II expression present on the antigen-presenting cells, the induction of T-cell production of interleukin 10 (IL-10), and thus a shift in the balance toward anti-inflammatory T helper (Th)-2 cells, and the inhibition of T-cell migration as a result of a blockade of metalloproteases and adhesion molecules [46] (Figure 1: a synopsis of IFN mechanisms of action). 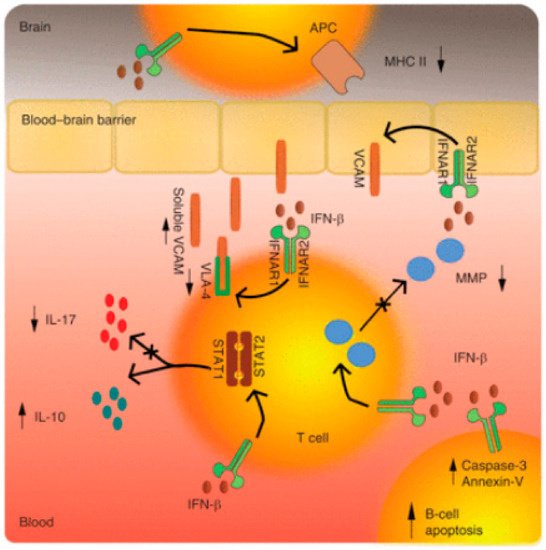 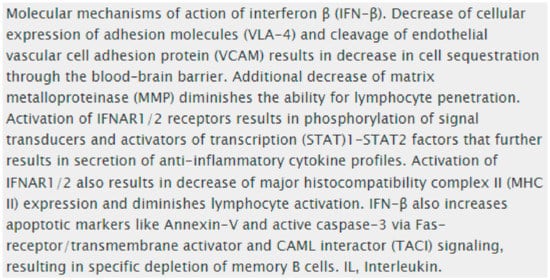 Figure 1. Molecular Mechanisms of Action of Interferon β [45].
The actions of IFNs are mediated through transcriptional factors and subsequent gene regulation. The major route in which IFN-β produces its effect is by activating the Janus kinase (JAK) signal transducers and activators of the transcription (STAT) pathway. More specifically, IFN-β binding to the type I IFN receptor causes phosphorylation of STAT1 and STAT2 and the formation of STAT1-STAT2 heterodimers, which translocate to the nucleus, bind the IFN-stimulated response element (ISRE), and modulate the expression of ISRE-regulated genes [47]. It has been demonstrated that the cellular response to IFNs is complex and results in changes in the expression of more than 500 genes representing ∼0.5% of the human genome [48]. Rizzo et al., focusing on the pivotal role of B cells in MS immunopathology, investigated the mechanism of B-cell apoptosis. The up-regulation of mechanisms that require FAS-receptor/TACI (transmembrane activator and CAML interactor) signaling and the production of apoptotic markers such as Annexin-V and caspase-3 were shown as specific inducers of B-cell apoptosis [49].

The mechanism of action of GA has long been an enigma. GA has well-established immunomodulatory properties, promoting the expansion of anti-inflammatory and regulatory Th2 and Treg cells and inducing the release of neurotrophic factors. Using various genetically modified mouse strains, as well as human monocytes, Molnarfi et al. showed that GA inhibited the TRIF-dependent pathway, resulting in a reduction in IFN-β production [50] (Figure 2). This observation is consistent with the earlier demonstration that STAT1 phosphorylation is reduced upon activation in type II monocytes [51]. These findings provide a key anti-inflammatory mechanism connecting innate and adaptive immune modulation in GA therapy. Animal studies have also shown that GA-reactive Th2 cells migrate to the CNS and accumulate at the site of active lesions. Thus, GA-reactive T cells provide the effector arm in treatment. However, GA treatment influences both innate and adaptive immune compartments, and it is now recognized that antigen-presenting cells (APCs) are the initial cellular targets for GA, and it is the modulation of the APC compartment to anti-inflammatory (M2) phenotypes that leads to an expansion in regulatory Th2 and Treg cells. In addition, the anti-inflammatory (M2) APCs induced following treatment with GA are responsible for the induction of anti-inflammatory T cells that contribute to its therapeutic benefit [52]. Mechanisms of action of GA that promote immunomodulation and neuroprotection are not mutually exclusive, and several may contribute to the efficacy of the drug (Figure 3). 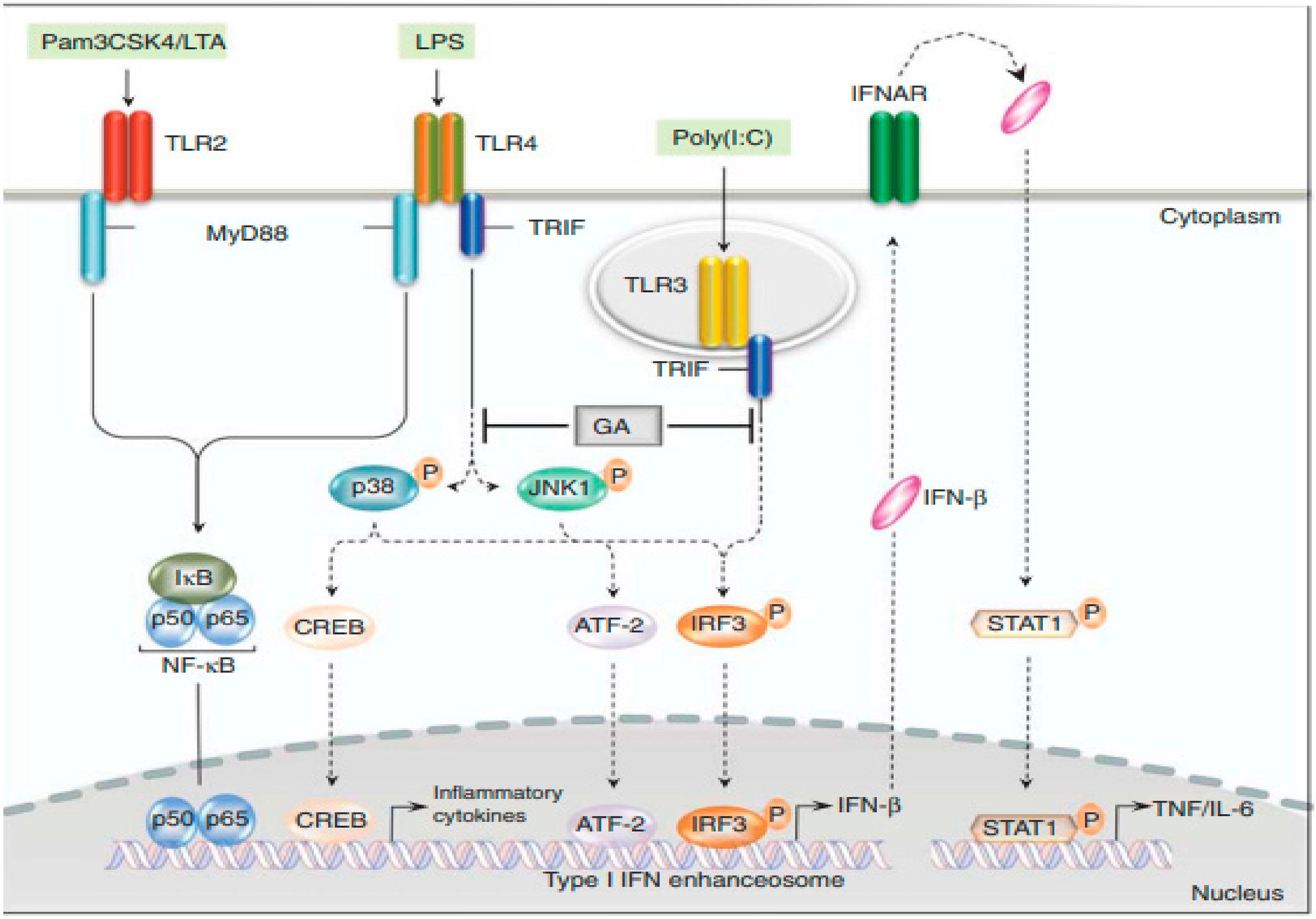 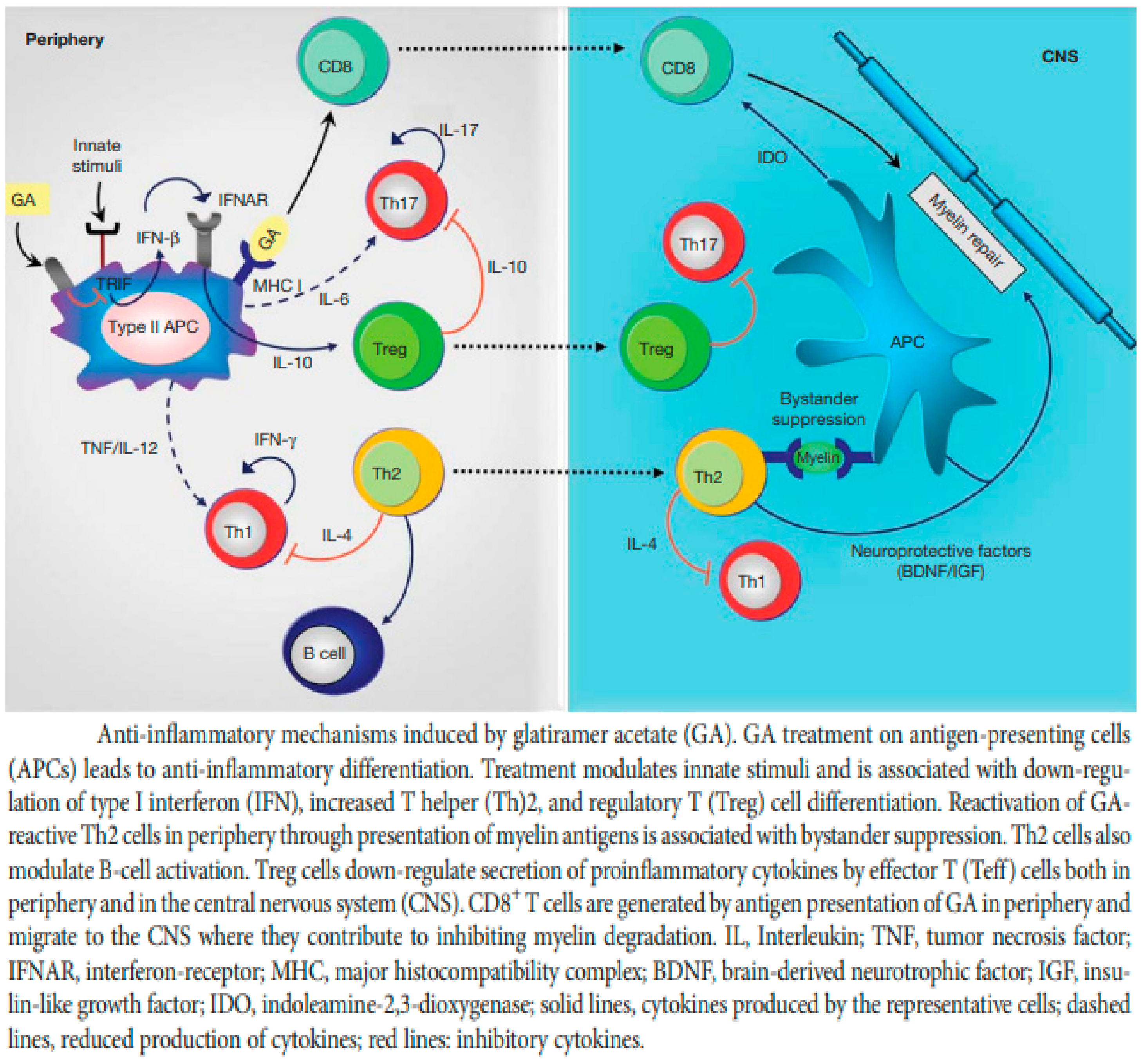 More
© Text is available under the terms and conditions of the Creative Commons Attribution (CC BY) license; additional terms may apply. By using this site, you agree to the Terms and Conditions and Privacy Policy.
Upload a video for this entry
Information
Subjects: Ophthalmology
Contributors MDPI registered users' name will be linked to their SciProfiles pages. To register with us, please refer to https://encyclopedia.pub/register :
George Saitakis
,
Bart K. Chwalisz
View Times: 111
Revisions: 2 times (View History)
Update Date: 20 Sep 2022
Table of Contents
1000/1000
Hot Most Recent