+1 point
Thank you for your contribution! You can also upload a video entry related to this topic through the link below: https://encyclopedia.pub/user/video_add?id=27135
Check Note
2000/2000
Dendrimers in Personalized Medicine

Dendrimers are a special class of synthetic macromolecules, constituted of branches built, step by step, around a central multifunctional core. Each layer of branching points creates a new “generation”. Most of the properties of dendrimers depend on the type of their terminal functions. Dendrimers are often considered as 3-dimensional soft nanoparticles, in opposition to hard metal nanoparticles. Despite the fact that nature has favored branching structures at all levels, from galaxies to trees and to dendritic cells, examples of branching at the molecular level are extremely rare. One can cite glycogen, a branched polymer of glucose, and also some cases of branched lignin, but none of them have a precisely highly branched structure, as do dendrimers. Such unusual structure has generated a many expectations for dendrimers: a huge number of publications and patents exist in relation to medicine, including in relation to personalized medicine but have resulted in very poor clinical translation up to now. This entry focusses on some of the clinical trials carried out with dendrimers.

1. Clinical Trials with Dendrimers Based on Poly-L-Lysine

The very first large dendrimers synthesized and patented were based on poly-L-lysine [1], and the first example of clinical trials with dendrimers concerned poly-L-lysine dendrimers. They were first functionalized with 24 macrocyclic complexes of gadolinium on the surface (Figure 1A), affording a high-relaxivity agent for MRI (magnetic resonance imaging) [2]. This compound, named Gadomer-17 or SH L 643 A (Schering AG, Berlin, Germany), was first injected to healthy volunteers for imaging their aortoiliac region and then to patients with coronary artery disease, affording an improved detection  [3]. However, there is no recent result published with this compound. 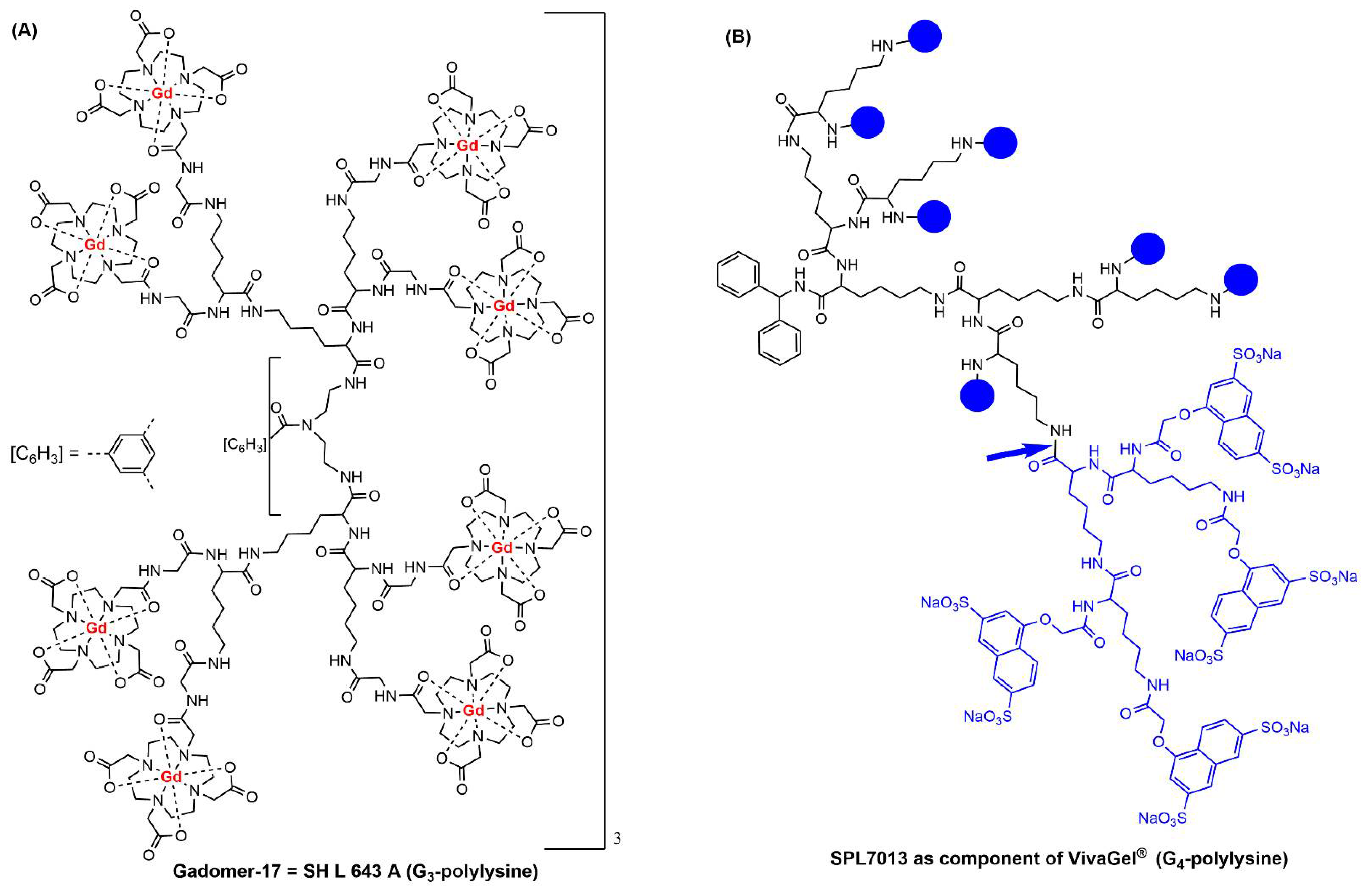 Figure 1. Chemical structure of two poly-L-Lysine dendrimers. (A) Gadomer-17 used as MRI agent. (B) SPL7013, also named Astodrimer sodium, the active ingredient in the mucoadhesive gel VivaGel®; the blue bowls correspond to the structure that is shown in blue after the blue arrow.
A second example of poly-L-lysine dendrimer was proposed by Starpharma (Australia) as an active ingredient in gels against sexually transmitted diseases, as it has antiviral properties and is able to block bacteria when formulated as a mucoadhesive gel [4]. It is based on a generation-four dendrimer bearing 32 Sodium 1-(Carboxymethoxy)naphthalene-3,6-disulfonate on the surface, named SPL-7013 as well as Astodrimer sodium (Figure 1B). The formulated gel, named VivaGel®, has been tested in at least 13 clinical trials for assessing first the safety, tolerability, PK, and acceptability of vaginal administration. The first conclusion of a randomized, double-blind, placebo-controlled, dose-escalation trial conducted in 2004 at the Royal Adelaide Hospital (Australia) was that VivaGel® applied vaginally once daily for 7 days at concentrations of 0.5% to 3% was safe and well-tolerated in women, with no evidence of systemic toxicity or absorption [5]. Another phase 1 clinical trial (registered as NCT00331032, 29 May 2006) was carried out in the USA and Kenya as a randomized, placebo-controlled trial. The conclusion was that genitourinary adverse events and colposcopy findings were consistent with mild epithelial irritation and inflammation, in particular when using a 3% dosage [6]. It was also shown in this research that several mucosal immune parameters were increased compared to the placebo [7]. Another phase 1 clinical trial (registered as NCT00442910, 5 March 2007) was carried out almost at the same time in the USA (San Juan, Puerto Rico and Tampa, Florida). The conclusion was that VivaGel® was generally well-tolerated and comparable with the placebo although there was a higher incidence of low-grade related genital adverse effects, as in the previous study  [8]. Another conclusion concerned the need for improvement of gel formulations to seek better acceptability  [9].  The tolerance by men [10] and its safety for them (Phase 1 NCT00370357, 31 August 2006) were also assessed  [11].
The antiviral effects were early assessed, in particular against genital herpes (Phase 1 NCT00331032, 29 May 2006) and against HIV (Phase 1 NCT00370357, 31 August 2006, and Phase 2 NCT00740584, 25 August 2008) [12]. However, the clinical trials were then oriented towards the study of the anti-bacterial properties of SPL-7013 [13], in particular against bacterial vaginosis (BV). A phase 2 clinical trial (NCT01201057, 14 September 2010) was conducted in a double-blind, multicenter, randomized, placebo-controlled, dose-ranging study for the treatment of bacterial vaginosis. It was shown that VivaGel (named Astodrimer in this research and in the followings) once daily for 7 days was superior to placebo and was well-tolerated at 1% dose, supporting a role for such gel as an effective treatment for bacterial vaginosis [14]. The dose range and the efficiency of the treatment against bacterial vaginosis was then assessed in several phase 3 clinical trials. Several publications have presented in details the outcomes of these clinical trials  [15]. Two phase 3 clinical trials were carried out in the USA for one (NCT01577238, 13 April 2012) and in the USA, Germany, and Belgium for the second one (NCT01577537, 16 April 2012, and 2012-000752-33, 22 June 2012). Both studies confirmed that Astodrimer is an effective, safe, and well-tolerated treatment for women with bacterial vaginosis [16]. Another phase 3 study (NCT02237950, 12 September 2014, and 2014-000694-39, 21 October 2014) demonstrated that the gel administered every second day for 16 weeks was effective and superior to placebo for prevention of recurrent bacterial vaginosis in women with a history of recurrent BV  [17].
VivaGel® is now available in different countries under different names, as gel against BV, and also as lubricant for condoms, as it has been shown in laboratory studies to inactivate HIV, herpes simplex virus (HSV), and human papillomavirus (HPV)  [4]. A recent and important sequel of the antivirus properties of dendrimer SPL-7013 concerns its efficiency against COVID-19. It has been reformulated in the form of a nasal spray to prevent COVID-19 infections under the name VIRALEZETM [18]. Tests were carried out on healthy volunteers at an Australian clinical trials facility [19].
Another example of poly-L-lysine dendrimer in the port-folio of Starpharma is numbered AZD0466. It is a fifth-generation poly-L-lysine dendrimer bearing two types of terminal functions, 32 PEG2100 molecules and 32 molecules of a dual Bcl-2/Bcl-xL inhibitor (anti-tumor agent) named AZD4320, attached through the linker X = N-Me (this compound is also named SPL-8977). Other different linkers have been used to modify the release rate of the drug (X = CH2 for SPL-8931, X = S for SPL-8932, and X = O for SPL-8933) (Figure 2). The slowest release was observed with SPL-8931, which displayed no cardiac toxicity, contrarily to the compound having a rapid release. Combination of modeling and experiments finally converged to the choice of AZD0466 (SPL-8977, X = N-Me) as the best choice [20]. This dendrimer was tested on mouse xenografts of malignant pleural mesothelioma. AZD0466 was as effective as the standard-of-care chemotherapy, Cisplatin, and displayed significantly reduced degree of thrombocytopenia [21]. AZD0466 was also shown suitable to be delivered subcutaneously; it can act as a circulating drug depot accessing both the lymphatic and blood circulatory systems in mice to fight against lymphoma [22]. 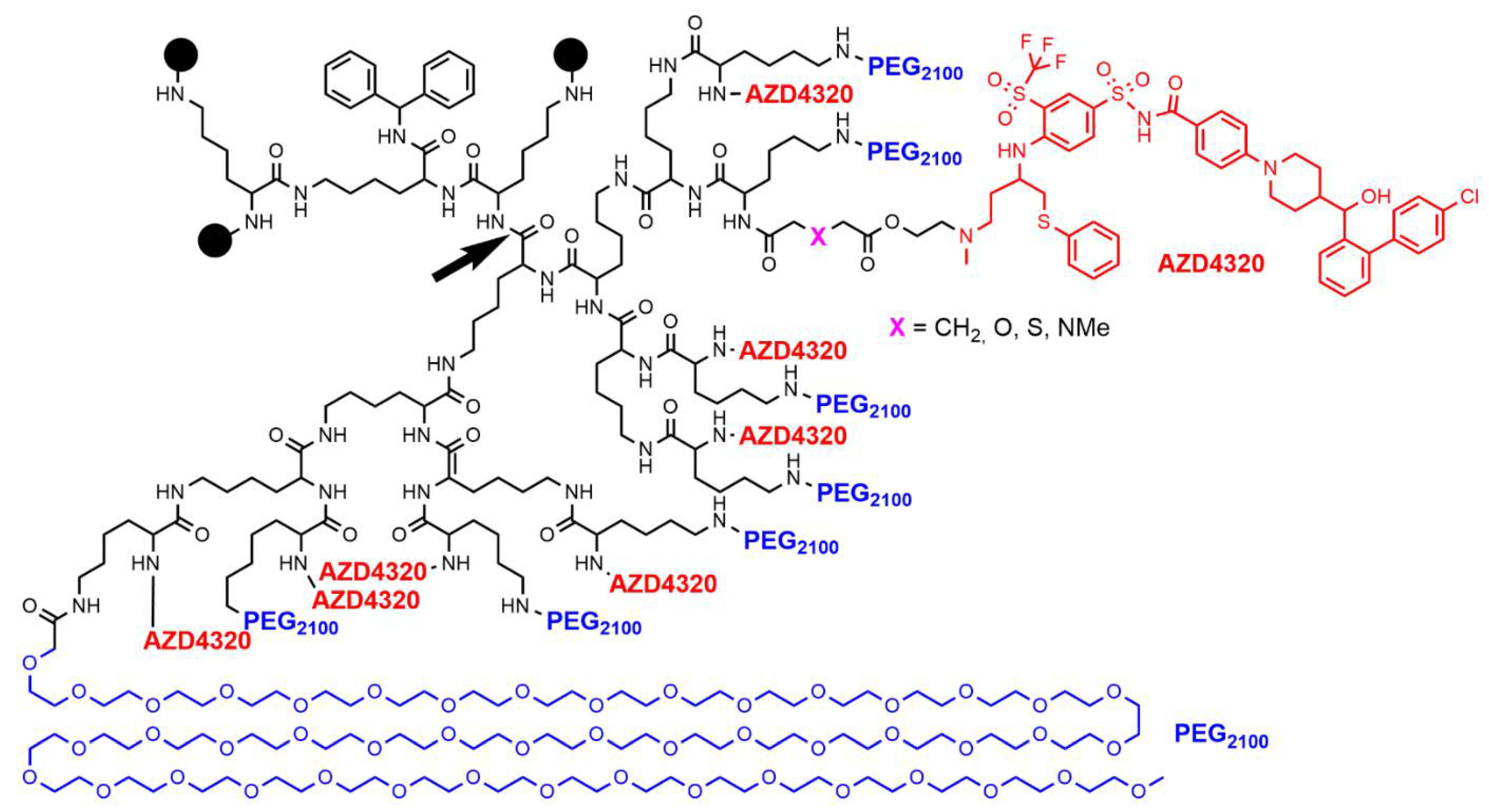 Figure 2. Structure of dendrimer AZD0466 (X = N-Me). The black bowls represent the structure that is shown after the black arrow.
In view of these interesting pre-clinical results in mice, at least three clinical trials are presently underway with AZD0466. NCT04214093 (30 December 2019) is a phase 1, first in human study in patients with advanced solid tumors, lymphoma, multiple myeloma, or hematologic malignancies. NCT04865419 (29 April 2021) is a phase 1 (AZD0466 alone) and phase 2 (AZD0466 in combination with the drug voriconazole) study in patients with hematological malignancies. NCT05205161 (25 January 2022) is a phase 1/phase 2 in patients with non-Hodgkin lymphoma.

PAMAM (PolyAMidoAMine) dendrimers [23] are the most widely used type of dendrimers. In the native form, they have NH2 terminal functions as poly-L-lysine dendrimers; thus, they can be easily modified at will. However, the risk of reverse Michael addition, particularly in acidic conditions, inducing the breakage of the structure, has precluded for a long time the use of PAMAM dendrimers in clinical trials  [15]. Nevertheless, PAMAM dendrimers have been recently tested in clinical trial, essentially proposed by Ashvattha Therapeutics [24]. All were obtained by first modifying the terminal functions to hydroxyl, then by stochastically grafting other functions. The first dendrimer, labelled OP-101, is a fourth-generation PAMAM stochastically functionalized with 40 OH and 24 N-acetyl cysteine functions. Figure 3 displays the full structure of one of the possible isomers; Figure 4A displays a very simplified structure of the same compound. 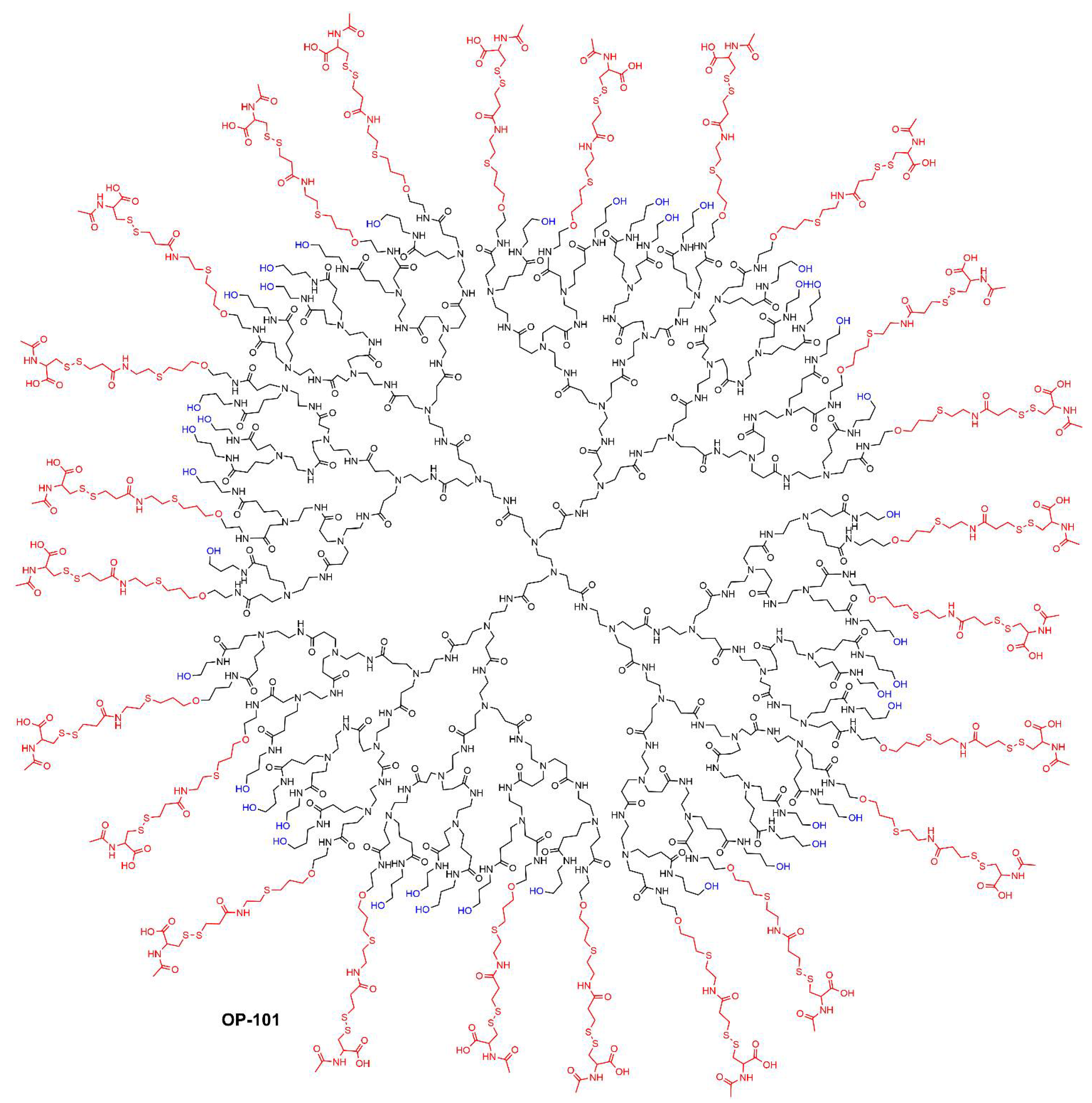 Figure 4. (A) Simplified structure of OP-101. (B) Simplified structure of D-4517. (C) Simplified structure of 18F-OP-801.
It was shown that this compound OP-101 has anti-inflammatory and anti-oxidant activity in microglia cells [25]. The first clinical trial, NCT03500627 (18 April 2018), was a phase 1 study to evaluate the safety, tolerability, and pharmacokinetics of OP-101 injected intravenously. The second trial, NCT04321980 (26 March 2020), evaluated the subcutaneous administration of OP-101. The objectives of the phase 2 study NCT04458298 (7 July 2020) are to evaluate the efficacy of OP-101 in patients with severe COVID-19 and its effect in reducing pro-inflammatory cytokines biomarkers. No drug-related adverse events were reported. OP-101 reduced morbidity and mortality in hospitalized patients with severe COVID-19. Indeed, at day 60, only three of seven patients given placebo were surviving, whereas they were 14 of 17 for OP-101–treated patients  [26].
Another example of PAMAM hydroxyl dendrimers stochastically functionalized concerned the grafting of known drugs suitable for treating diverse eye diseases. A recent paper published this concept using triamcinolone-acetonide as drug conjugated to the dendrimer and tested in models of age-related macular degeneration [27]. However, the drug presently under clinical trials is a generation-four PAMAM hydroxyl dendrimer partly functionalized with Sunitinib, an inhibitor of vascular endothelial growth factor receptors (simplified structure in Figure 4B). The grafting through an ester bond enables the slow release of the drug. This dendrimer, named D-4517-2 [28], has been evaluated in the phase 1 clinical trial NCT05105607 (3 November 2021) for safety and tolerability after subcutaneous injection. The phase 2 NCT05387837 (24 May 2022) intends to evaluate safety, tolerability, and pharmacokinetics in patients with neovascular (wet) age-related macular degeneration or subjects with diabetic macular edema.

3. Clinical Trials with Other Types of Dendrimers 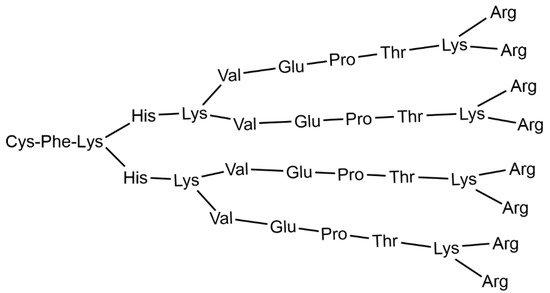 Figure 5. Structure of the cationic peptide dendrimer KK-46, usable as carrier of siCoV.
In conclusion, the huge number of dendrimers already synthesized and the even larger number of dendrimers that could be synthesized as active per se or as carriers of drugs should have generated breakthrough in medicine, including in personalized medicine, but this is not the case, as only a very limited number of clinical trials have been carried out to date.

More
© Text is available under the terms and conditions of the Creative Commons Attribution (CC BY) license; additional terms may apply. By using this site, you agree to the Terms and Conditions and Privacy Policy.
Upload a video for this entry
Information
Subjects: Allergy
Contributor MDPI registered users' name will be linked to their SciProfiles pages. To register with us, please refer to https://encyclopedia.pub/register :
Anne-Marie Caminade
View Times: 86
Revisions: 3 times (View History)
Update Time: 14 Sep 2022
Table of Contents
1000/1000
Hot Most Recent