+1 point
Thank you for your contribution! You can also upload a video entry related to this topic through the link below: https://encyclopedia.pub/user/video_add?id=26936
Check Note
2000/2000
PD-1/PD-L1-Based Immunotherapy for Metastatic Triple-Negative Breast Cancer

Triple-negative breast cancer (TNBC) refers to a type of breast cancer in which the immunohistochemistry of the cancer tissue is negative for estrogen receptor (ER), progesterone receptor (PR), and human epidermal growth factor receptor-2 (HER-2), and it accounts for 15–20% of all breast cancer patients. Because of its rapid progression, most patients with TNBC have progressed to the more malignant and aggressive metastatic TNBC (mTNBC), with a shorter survival period by the time they seek medical attention. The majority of breast cancer deaths are caused by mTNBC. According to pathological characteristics, it lacks specific therapeutic targets, and it cannot be completely removed surgically due to unclear distant micro-metastases. Therefore, treatment of mTNBC is usually based on chemotherapy. However, according to clinical statistics, the overall response rate (ORR‘) of mTNBC with single-agent chemotherapy is only 10–30%, and with the best multi-drug combination chemotherapy regimen it is only 63%. The average pathologically complete response (pCR) to mTNBC with multi-drug combination chemotherapy regimen is about 30–40%. In summary, the benefit of chemotherapy for patients with mTNBC is not promising. The search for treatments with high clearance, good targeting, and few side effects has become a major focus of medical research.

Under normal circumstances, the human immune system functions in immune surveillance and elimination, but as the tumor grows, the tumor cells develop immune-suppressive responses, such as weakened antigenicity of the tumor cells, reduced responsiveness to the immune killing mechanism, and expression of immunosuppressive molecules. Under these circumstances, the immune system develops immune tolerance to tumor cells, known as immune editing (Figure 1) [1][2]. Immunotherapy for tumors is based on immune editing, applying immunological principles and methods to reactivate immune cells, enhance the anti-tumor immune response, break the immune tolerance, and inhibit tumor growth by enhancing the antigenicity of tumor cells and the killing ability of immune cells, and inhibiting the effect of immunosuppressive molecules. It mainly includes immune checkpoint blocking therapy [3], therapeutic antibodies [4], cancer vaccines [5], adoptive cellular immunotherapy [6], small-molecule inhibitors [7], and other methods. 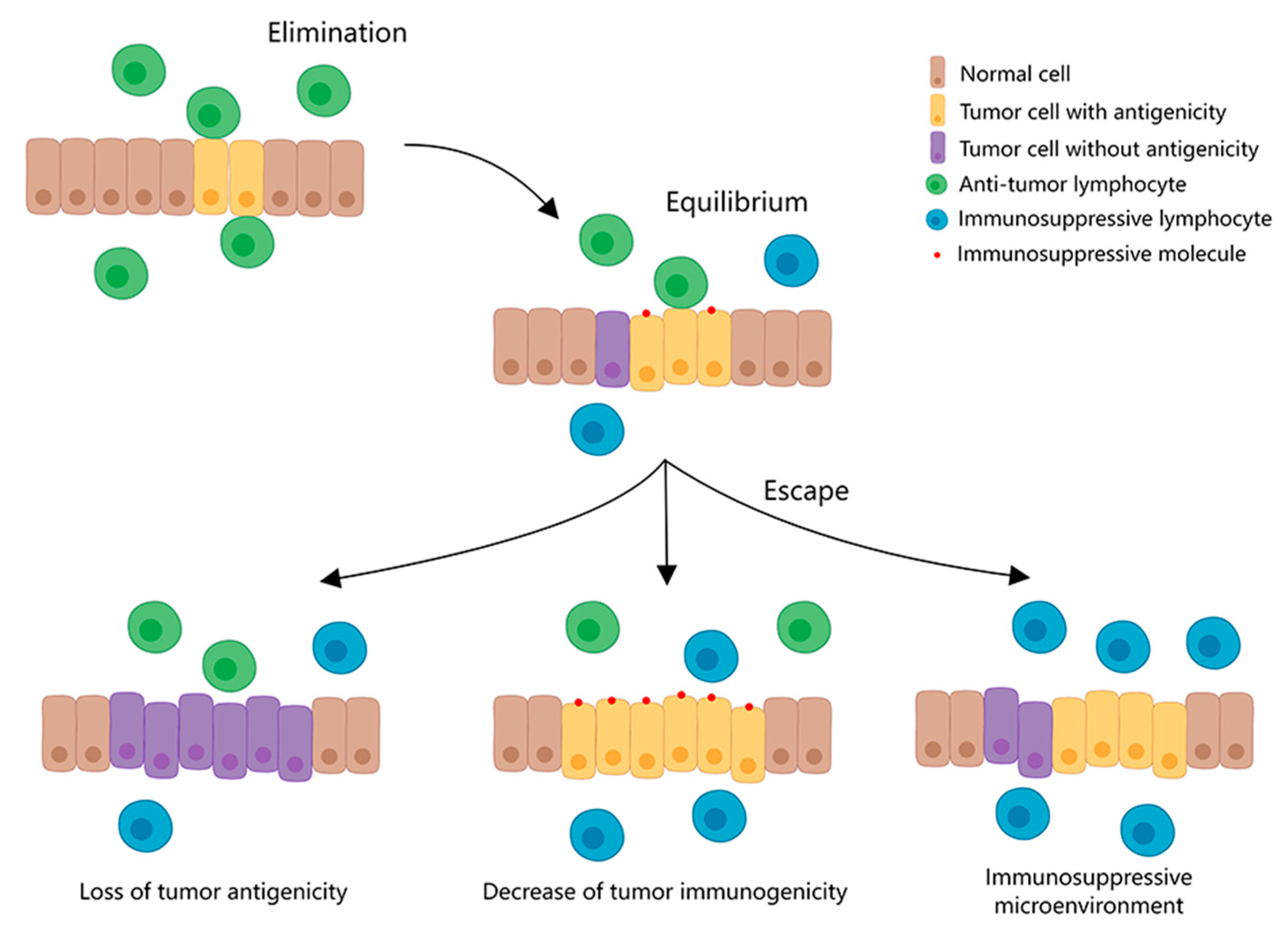 Figure 1. Immune escape mechanism of tumors. Along with tumor growth, the immune system develops immune tolerance to tumor cells due to weakened antigenicity of tumor cells, reduced responsiveness to immune killing mechanisms, and expression of immunosuppressive molecules.
Immune checkpoint therapy (ICT) blocks the action of immune checkpoints by artificially administering inhibitors of immune checkpoints or their ligands, thereby upregulating T cells activity and improving the anti-tumor immune response. The Food and Drug Administration (FDA) has approved multiple immune-checkpoint-blocking drugs for cancer treatment because of the advantages of this method, such as being highly targeted and not prone to tumor resistance [8]. Currently, PD-1/PD-L1 and CTLA-4/B7-1 are the primary targets of immune checkpoint blockade therapies. In addition, molecules such as lymphocyte activation gene-3 (LAG-3), T-cell immunoglobulin and mucin domain 3 (TIM-3), and T-cell immunoglobulin and ITIM domains (TIGIT) have also been extensively investigated as targets.
PD-1, also known as CD279, is a 55 kDa transmembrane protein. It is mainly expressed by activated T cells, B cells, and natural killer cells and is significantly highly expressed by tumor-specific T cells. PD-L1, also known as CD274 or B7-H1, belongs to the B7 family and is a 33 kDa transmembrane glycoprotein. This protein is normally expressed by macrophages, activated T cells, and B cells, and its expression in tumor cells increases with the progression of the disease and/or with the degree of heterogeneity of tumor cells. When PD-1 is combined with PD-L1, it can inhibit the activation and proliferation of T cells in peripheral tumor tissues and attenuate the cell-killing effect of T cells by regulating the PI3K-AKT-mTOR [9] and Ras-EMK-ERK pathways [10]. In addition, tumor cells can be stimulated to grow and invade, causing immunosuppression, inhibiting the secretion of pro-inflammatory factors, and weakening the antigen-presenting ability of dendritic cells, which leads to the immune escape of tumors [3].
Cytotoxic T lymphocyte-associated antigen-4 (CTLA-4), also known as CD152, is a leukocyte differentiation antigen that functions primarily in the T cell activation phase of lymphoid organs. As a transmembrane receptor on the surface of T cells, CTLA-4 inhibits T cell hyperactivation by competitively binding ligand B7-1/2 (CD80/86) to CD28, the activating receptor of T cells [11].
PD-1/PD-L1 therapies are more specific and act faster because PD-1 acts mainly in peripheral tumor sites and works in the T cell effector phase, while CTLA-4 acts mainly in lymphoid organs and works in the T cell activation phase [12]. Several studies have compared the adverse effects of treatment with CTLA-4 and PD-1/PD-L1 inhibitors and found that CTLA4 inhibitors have more side effects than PD-1/PD-L1 inhibitors [13]. Therefore, immunotherapy with PD-1/PD-L1 inhibitors can enhance anti-tumor immunity, which is more suitable for patients in poor condition and with aggressive tumors and is important for the treatment of rapidly progressing mTNBC (Figure 2). 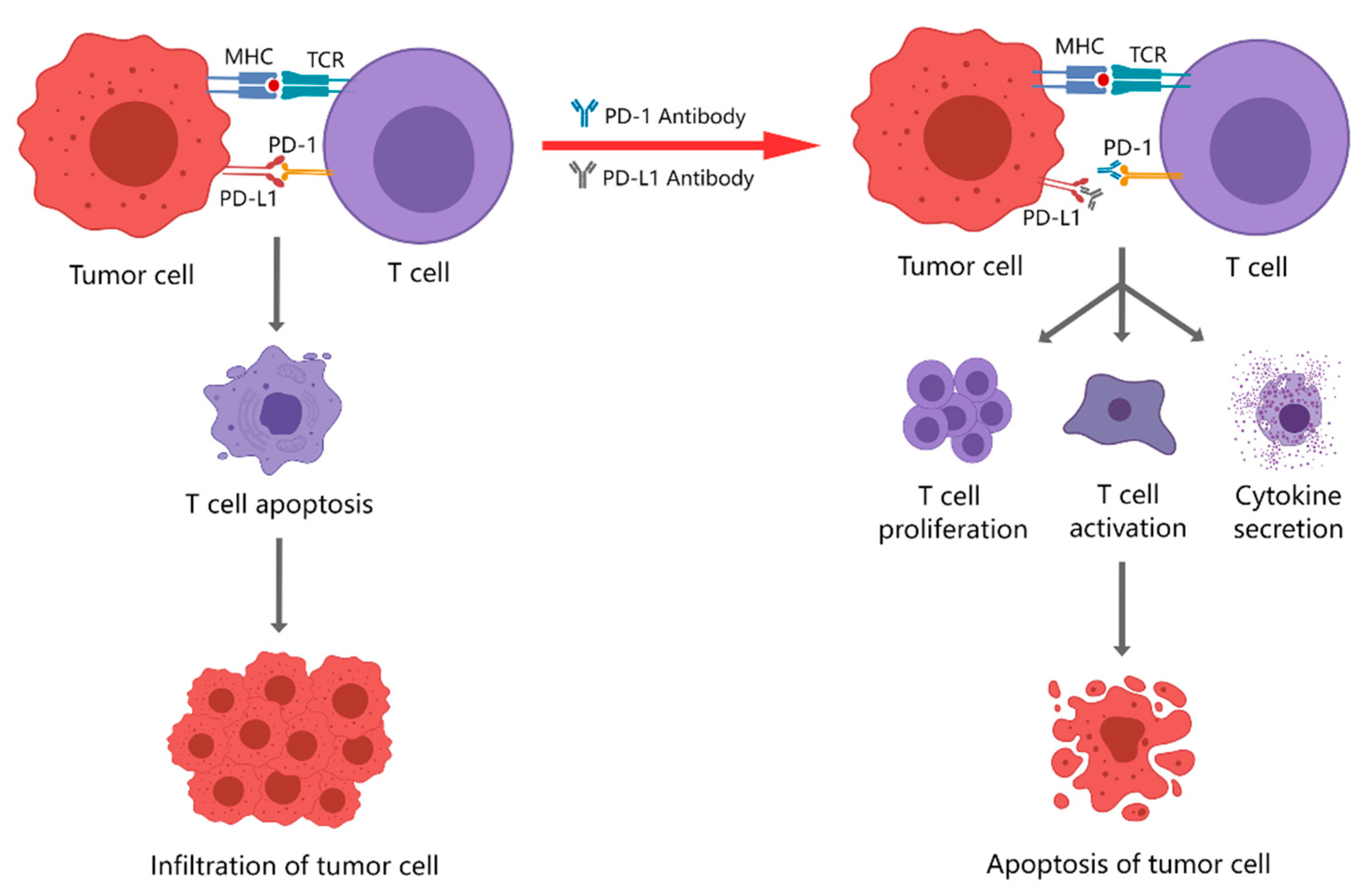 PD-1 inhibitors are monoclonal antibodies that bind to the PD-1 on T cells, effectively inhibiting the binding of PD-1 to PD-L1 and PD-L2 receptors on cancer cells, allowing the immune escape of tumor cells to be recognized by T cells and exert anti-tumor effects. Studies have shown that PD-1 monoclonal antibodies do not bind Fc or activate complements during the blockade of PD-1; therefore, they are not cytotoxic [14].

PD-L1 inhibitors are monoclonal antibodies engineered from human PD-L1 that target PD-L1 on tumor cells and inhibit the PD-1/PD-L1 pathway, thereby reactivating anti-tumor immunity. The durable safety and long-term clinical benefits of monoclonal antibodies against PD-L1 have led the FDA to approve them for use in the treatment of many types of cancers  [15][16][17].

More
© Text is available under the terms and conditions of the Creative Commons Attribution (CC BY) license; additional terms may apply. By using this site, you agree to the Terms and Conditions and Privacy Policy.
Upload a video for this entry
Information
Subjects: Oncology
Contributors MDPI registered users' name will be linked to their SciProfiles pages. To register with us, please refer to https://encyclopedia.pub/register :
Yifan Ren
,
Jialong Song
,
Xinyi Li
,
Na Luo
View Times: 125
Revisions: 2 times (View History)
Update Date: 07 Sep 2022
Table of Contents
1000/1000
Hot Most Recent