+1 point
Thank you for your contribution! You can also upload a video entry related to this topic through the link below: https://encyclopedia.pub/user/video_add?id=26791
Check Note
2000/2000
Therapeutic Potential of Intrabodies for Cancer Immunotherapy

Tumor cells are characterized by overexpressed tumor-associated antigens or mutated neoantigens, which are expressed on the cell surface or intracellularly. One strategy of cancer immunotherapy is to target cell-surface-expressed tumor-associated antigens (TAAs) with therapeutic antibodies. Intrabodies are suitable to knockdown TAAs and neoantigens without off-target effects. Intrabodies can now be selected against virtually any protein inside the cell. RNA sequencing and proteome analysis of single tumor cells combined with computational methods is bringing forward the identification of new neoantigens for the selection of anti-cancer intrabodies, which can be easily performed using phage display antibody repertoires. Anti-cancer intrabodies demonstrated tumor growth inhibition in appropriate xenograft tumor mouse models. At the moment, the biggest challenge in translating TAA/neoantigen-directed intrabodies into the clinic is the specific targeting of the intrabodies to the tumor cells. The promising development of tumor-specific lipid nanoparticles which could be embedded with an mRNA transgene or new capsid-modified and tumor-specific recombinant AAVs should enable tumor-cell-specific intrabody transfection/transduction in cancer patients and may finally bring intrabodies into the clinic.

Cancer immunotherapy with monoclonal antibodies or antibody fragments comprises the targeting of antibodies to extracellular or intracellular tumor-associated antigens (TAAs) or mutated neoantigens [1][2][3]. In contrast to TAAs, neoantigens comprise tumor-specific mutations and are not expressed by normal cells. The binding of tumor-specific antibodies to extracellular TAAs or neoantigens activates natural killer cells, macrophages or the complement system, leading to the destruction of the tumor cells. In addition to naked monoclonal antibodies, bispecific antibodies, immunotoxins, immunocytokines and engineered CAR-T cells with a TAA or neoantigen-specific antibody fragment or TCR-like antibody fused to T-cell signal domains can be successfully applied [4][5].

Intrabodies can now be selected against virtually any protein inside the cell and they have the potential to specifically inhibit the function of TAAs and even neoantigens in cancer patients. Two different kinds of intrabodies exist with different modes of action. One group of intrabodies comprises the ER intrabodies produced as scFvs inside the ER to inhibit the function of transitory proteins passing the secretory pathway [6]. Functional inhibition is performed through intrabody/antigen retention by the SE (KDEL) sequence fused to the C terminal end of the intrabody. Many ER intrabodies have been selected against overexpressed TAAs on the tumor cell surface [6][7][8].

The other group are single domain antibodies (sdAbs) comprising only the variable domain of the heavy chain VHH from camels (nanobodies) or sharks or human VH and VLs and are stable in the cytoplasm or nucleus [9]. They inactivate their targets by altering their conformation or interfere with the binding of the target protein to its corresponding binding partner.

TAAs passing the secretory pathway are mainly cell surface receptors. They are targeted by ER intrabodies. TAAs and neoantigens expressed in the cytosol or nucleus are targeted by single domain antibodies. ER intrabodies in the scFv format are very stable in the ER but not in the nucleus or cytoplasm whereas sdAbs are stable in both compartments [23]. ER intrabodies can be constructed from hybridoma clones as scFv or selected from human antibody phage display repertoires [8][24].
To construct intrabodies from hybridomas targeting cell surface receptors, the variable genes of the light and heavy chain of the monoclonal antibody are amplified with consensus primer, by adapter-ligated PCR, 5′ RACE or by PCR with primers of the constant region using circularized cDNA [24]. Both variable genes are then assembled to a scFv fragment and cloned into an ER targeting vector, providing the ER retention signal fused to the start of the intrabody coding region after cloning. Most anti-cancer ER intrabodies targeting cell surface receptors (human Il-2 receptor, ErbB-2, TLR2) were constructed from hybridoma clones [25][26].
ER intrabodies were also generated using phage display antibody repertoires. A scFv intrabody targeting VEGFR2/KDR was selected from an immune phage display library of mice [27]. Recently, intrabodies targeting human papillomavirus 16 E6 and E7 oncoproteins for the treatment of established HPV-associated tumors were generated from a synthetic human antibody phage display library [28]. One scFv against 16 E7 was targeted to the ER and interferes with the binding of E7 to retinoblastoma tumor suppressor (pRb). The second intrabody fused with a nuclear localization sequence rescued p53 activity, leading to cell death.
Some ER intrabodies were not targeted to cell surface receptors but to membrane proteins in intracellular compartment. These include TLR9, which translocates into the endosome after activation with CpG DNA and is involved in pancreatic tumor development [29] and polysialyltransferases ST8SiaII and ST8SiaIV localized in the Golgi apparatus which are activated during the growth of several tumors [30]. All those intrabodies were generated from hybridoma clones [14][31].

Several intrabodies have been generated in recent years against intracellular antigens [32]. The sdAb against F-actin capping protein CapG inhibited breast tumor metastasis in a xenograft tumor mouse model [15]. Recently an anti-HIF-1α nanobody was developed to decrease gemcitabine resistance in pancreatic cancer patients [33]. The intrabody competitively inhibited the binding of the transcription factor HIF-1α heterodimer to the aryl hydrocarbon receptor nuclear translocator (ARNT), leading to the inhibition of the HIF-1/VEGF pathway in vitro. It is known that high HIF-1α expression reduces sensitivity to gemcitabine, which is applied to treat pancreatic adenocarcinoma and other cancers [34]. Interestingly the nanobody reduced tumor growth in mice treated with the nanobody to 41.58%, treated with gemcitabine to 64.89% and treatment with both gemcitabine and nanobody to 80.44%, respectively.
In another approach, nanobodies against AKT2, an isoform of the three AKT isoforms (AKT1, AKT2 and AKT3) of serine/threonine protein kinase AKT (also known as protein kinase B), were developed. AKT regulates cell proliferation, survival, growth, migration and metabolism and is hyperactivated by phosphorylation in cancer [35]. One nanobody (Nb8) affects the phosphorylation and/or expression levels of a wide range of proteins downstream of AKT, resulting in a G0/G1 cell cycle arrest, the induction of autophagy, a reduction in focal adhesion count and loss of stress fibers.
Furthermore, a nanobody was recently reported to inhibit the interaction between Twist1 and p53 [36]. Twist1 facilitates the degradation of p53 by the negative regulator murine double minute 2-Protein (MDM2), which in wild-type cancer inhibits the transcriptional activity of p53 and induces its degradation. This study demonstrated that targeting Twist1/p53 interaction with nanobodies might be a therapeutic option.
Interestingly, the function of a new nanobody against a G protein-coupled receptor (GPCR) of the human cytomegalovirus (CMV), US28, which is involved in cancer progression in glioblastoma was demonstrated [37]. The nanobody (VUN103) inhibits constitutive US28 signaling by G protein displacement and inhibited US28-enhanced spheroid growth in glioblastoma tumor cells. Phosphorylation of STAT3 was completely inhibited to the level of uninfected cells in glioblastoma tumor cells infected with CMV and transduced with the VUN103 intrabody. The group developed another nanobody (Nb7) which binds ligand-bound US28 and inhibits signaling too. Both nanobodies recognize two different conformations of US28, the super activated US28 induced by ligand CX3CL1 and the constitutively active US28. In both cases, the binding of the nanobodies inhibited the recruitment of the G protein αq subunit (Gαq).
Furthermore, a sdAb ER intrabody targeted an ER membrane receptor: the human immunoglobulin heavy chain (VH) targeted B-cell receptor-associated protein 31 (BAP31 and blocked cyclin kinase inhibitor p27kip1 degradation, leading to growth inhibition and apoptotic death in GC cells and GC tumors in mice [19]. Finally, a novel nucleus-located intracellular nanobody against HPV16 E6 oncoprotein was recently generated from an immune camelid single domain library, inhibiting tumor growth in HPV16 mouse models [19].

Intracellular TAAs and neoantigens are targeted by single domain antibodies selected from camels, sharks or human VH or VL antibody repertoires by phage display or ribosomal display [32][38][39]. Recently a new technique was established for the selection of small molecules, peptide aptamers and cytoplasmic intrabodies: localization-based interaction screening (SOLIS) [40]. SOLIS employs two chimeric proteins in which a membrane localization motif (CaaX) is fused at the C-terminus of interest neoantigens while the catalytic domain of SOS is fused at the C-terminus of another protein of interest. Son of sevenless (SOS) is a guanine nucleotide exchange factor that activates Ras upon growth factor stimulation. Interaction between the two proteins of interest induces membrane localization of the SOS fusion protein and then cell proliferation due to the activation of the RasMAPK signaling pathway.
Intrabodies were selected against oncogenic Ras mutants using different approaches leading to several intrabodies in different formats: disulfide free scFv, human VH nanobody, complete IgG antibody, “RasIns” (fibronectins) and DARPins [10][11][12][13][41][42][43] (Table 1) (Figure 1). In its active form, Ras binds to GTP and can interact with multiple effector proteins such as Raf kinases, PI3K (phosphatidylinositol 3-kinase) and RalGDS (Ral guanine nucleotide dissociation stimulator) [44]. Ras mutants of the canonical ras gene family, H-ras, N-ras and K-ras, are frequently activated by point mutation in human cancers, predominantly at G12, G13 and Q61 residues, leading to impaired GTPase activity resulting in constitutively active mutants persistently binding GTP and promoting tumorigenesis and tumor malignancy [45]. KRAS G12V is present in 3.47% of AACR GENIE cases, with pancreatic adenocarcinoma, lung adenocarcinoma, colon adenocarcinoma, colorectal adenocarcinoma and rectal adenocarcinoma having the greatest prevalence. The proteins H-ras, N-ras and K-ras are also called H-p21Ras, K-p21Ras and N-p21Ras. 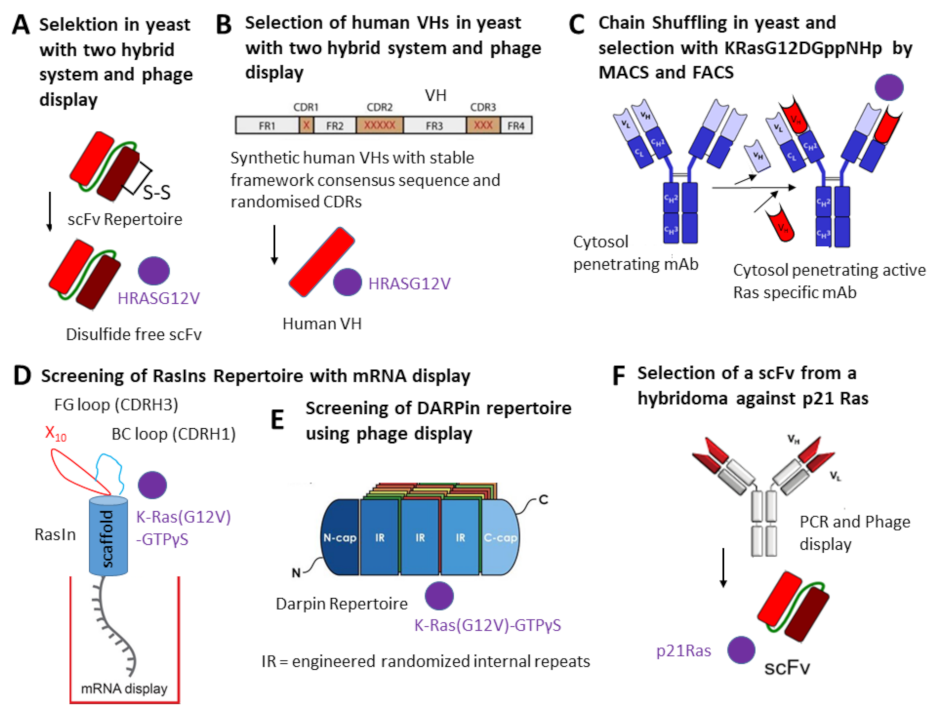 5. Bringing Intrabodies into Cancer Patients: Delivery of Intrabodies with Nanoparticles or AAV

Many methods for intrabody delivery into target cells are available such as the delivery of intrabody genes by plasmids or viral transduction, or using polymeric and dendrimeric nanoparticles embedded with small hydrophobic and hydrophilic drugs, peptides, vaccines and antibodies [56]. The most promising and efficient methods for intrabody transduction and expression in cancer cells are the use of lipid nanoparticles with embedded mRNA [57][58][59][60] and transduction with a new generation of AAVs carrying the intrabody cDNA [61][62] (Figure 2). 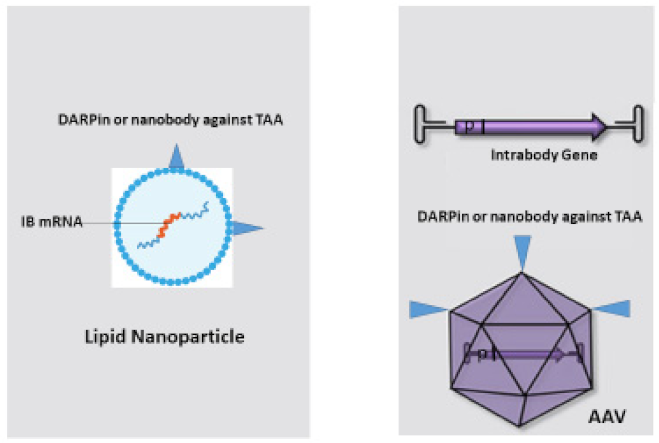 More
© Text is available under the terms and conditions of the Creative Commons Attribution (CC BY) license; additional terms may apply. By using this site, you agree to the Terms and Conditions and Privacy Policy.
Upload a video for this entry
Information
Subjects: Biochemistry & Molecular Biology
Contributor MDPI registered users' name will be linked to their SciProfiles pages. To register with us, please refer to https://encyclopedia.pub/register :
Thomas Böldicke
View Times: 156
Entry Collection: Biopharmaceuticals Technology
Revisions: 3 times (View History)
Update Date: 02 Sep 2022
Table of Contents
1000/1000
Hot Most Recent