+1 point
Thank you for your contribution! You can also upload a video entry related to this topic through the link below: https://encyclopedia.pub/user/video_add?id=26789
Check Note
2000/2000
Coumarins with Potential Medicinal Properties

Coumarins are a structurally varied set of 2H-chromen-2-one compounds categorized also as members of the benzopyrone group of secondary metabolites. Coumarin derivatives attract interest owing to their wide practical application and the unique reactivity of fused benzene and pyrone ring systems in molecular structure. Coumarins have their own specific fingerprints as antiviral, antimicrobial, antioxidant, anti-inflammatory, antiadipogenic, cytotoxic, apoptosis, antitumor, antitubercular, and cytotoxicity agents. Natural products have played an essential role in filling the pharmaceutical pipeline for thousands of years. Biological effects of natural coumarins have laid the basis of low-toxic and highly effective drugs.

Natural compounds have provided the basic chemical foundation for manufacturing numerous biotechnologically important products and medicinal agents. Microorganisms present an essential source of natural products with various bioactive properties. Fungi are among the groups of microorganisms that are commonly recognized as the bioproducers of valuable metabolites and are being explored for compounds with medicinal applications. However, researchers have discovered only a small percentage of economically important metabolites, indicating future exciting products of fungal origin [1][2]. Novel natural products with varied chemical structures are constantly being reported from fungi, which are also an excellent source of coumarins. Coumarins (2H-chromen-2-ones) occupy a prominent place among natural products. These are benzopyrone compounds belonging to the flavonoid-like moiety of secondary metabolites. Opposite to a widely distributed opinion attributing coumarins to a group of mainly plant secondary metabolites, a large portion of the presently known coumarins exceeding 1300 [3][4] have been identified in bacteria and fungi [5][6]. Moreover, fungi occurred to be the most effective source of the coumarin-based products of pharmaceutical importance, never-before seen. The diversity of bioactivities among coumarins is so huge that the phrase “pharmacological promiscuity” has been applied in their case [3].
The natural products of coumarin nature discussed in this work are biosynthesized by fungi. Their bioactivities are of interest due to their unique structural features, providing applications in such fields of primary importance as cancer and neuronal injury or degeneration, microbial and parasitic infections, and others. As a result, fungal-sourced chemical agents of the coumarin class are of immediate interest to the pharmaceutical industry. This entry describings coumarins as one of several groups of biotechnologically valuable compounds typically derived from fungi. These microorganisms constitute a remarkably diverse, ubiquitous group of eukaryotes with the ability to synthesize many secondary metabolites [7], such as anticancer, antimicrobial, and antioxidant compounds. Fungi are capable of synthesizing products with the chemical structures of the important secondary metabolites from plants, including herbal coumarins, as well as novel substances with unpredictable architectures.

Recent exhaustive works comprise a concise summary of the latest knowledge of the biological and pharmaceutical properties of the plant-derived coumarins [8], emphasizing the plant–endophyte interaction as a key for the coumarins’ production as secondary metabolites [9]. The coumarin skeleton has attracted great interest in the development of new drugs. Cheke et al. (2022) [10] have reported on several methods for the synthesis of coumarin derivatives as antimicrobial agents. Stefanachi et al. (2018) [11] provided an overview of the most recent design and synthesis pathways leading to mono- and polyfunctionalized coumarins. The authors discussed multitarget coumarins addressing neurodegenerative diseases with a focus on inhibitors of monoamine oxidase, cholinesterase, and aromatase. Innovative synthetic methods have been described by Srikrishna et al. (2018) [12] for many molecules based on the coumarin ring system. These synthetic routes have led to interesting analogues of coumarins that possess pharmacological activities. The review by Zhu and Jiang (2018) [13] concluded that the specific site on the core structure of coumarin exhibits one or more activities due to the electronic or steric effects of the substituents. This review is intended to be conducive to rational design and development of more active and less toxic agents with a coumarin scaffold. In the review by Hu et al. (2017) [14], coumarin and its derivatives as anti-tuberculosis agents have been reviewed and outlined the critical aspects of design and structure-activity relationship of these coumarin derivatives. In addition, Fan et al. (2018) [15] reviewed several fluoroquinolone hybrids, including fluoroquinolone-coumarin hybrids, as anti-tuberculosis agents.
A rather large number of recent reviews concerned with coumarins prompted the researchers to make drastic selections. Considering this in mind, the present research evaluates coumarins the fungal-sourced bioactive agents, their structure-related peculiarities, and their future therapeutic potential. Special attention has been paid to the fungal-derived biological activities, mainly cytotoxic, antibacterial, antitubercular, antifungal, and antiviral natural coumarins, as well as other coumarins of pharmacological value from fungi. A particular emphasis has been placed on the coumarins, successfully bioprospected from fungi but originally known as exclusively herbal metabolites. This research also highlights some aspects on molecular mechanisms underlying the coumarins’ biological activity. The coumarin derivatives studied in the course of clinical and preclinical testing have also been taken into account, but not in an extensive mode, most of these coumarins being not fungal-derived but (semi)-synthetic hybrid compounds and being already extensively quoted in the comprehensive reviews characterized above.

Coumarin (2H-1-benzopyran-2-one, or 2H-chromen-2-one) (Figure 1) is a parent compound of a class of coumarins, which are lactones consisting of a benzene ring fused to an alpha-pyrone ring. 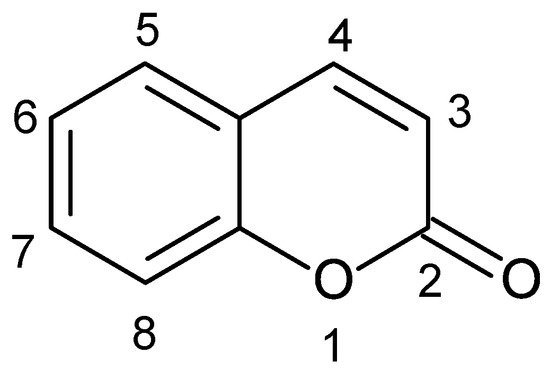 Figure 1. Structural formula of coumarin (2H-1-benzopyran-2-one) with atom numbering.
A key bicyclic heterocycle, 2H-chromen-2-one, is found to be a natural secondary metabolite extracted from plants and microorganisms. The name “coumarin” derives from the French term “coumarou” that refers to Dipteryx odorata (Coumarouna odorata) seeds, one of the sources from which coumarins were first isolated. Those benzopyrone derivatives belong to flavonoid-like groups of secondary metabolites, first from plants. Diverse families of plants have been used to isolate coumarins [16]. A few years ago, it was reported that more than 1300 coumarins have been identified in plants, bacteria, and fungi [17]. Coumarins (2H-chromen-2-ones) occupy a prominent place among natural products.
Natural products have been playing a major role in the search for novel drugs for numerous illnesses. Prominent producers of these natural products are found in fungi [18]. One should remember that the discovery of the antibiotic penicillin from a fungus almost a century ago heralded an era of intense exploration of compounds from prokaryotic and eukaryotic organisms for their pharmaceutical potential. It was the tremendous success of penicillin as an antibiotic in the early 1940s that shifted the focus of natural product-based drug sources from plants to microorganisms [1]. Throughout human history and especially in the past century, natural products have remained virtually undisputed leaders among the various therapeutic tools humans have employed to combat numerous diseases, including cancer.
Nevertheless, plant sources’ utilization for obtaining these valuable molecules, secondary metabolites with anti-inflammatory, anticoagulant, antibacterial, antifungal, antiviral, anticancer, antihypertensive, antitubercular, anticonvulsant, antiadipogenic, antihyperglycemic, antioxidant, and neuroprotective properties [19] presents many formidable challenges towards their reliable supply. Because of seasonal variations and large-scale deforestation concerns in plants, the alternative sources of microbial nature have attracted considerable interest among academic researchers and commercial representatives. While plant-originating products have been playing an important role in traditional medicine for thousands of years, more or less comprehensive research into fungal natural products became possible with the development of natural sciences during the 20th century. The secondary metabolites of microbial origin are well known as a valuable supply of lead molecules in the selection of drug candidates against infectious diseases, cancer, and many other illnesses. Endophytic microorganism, especially fungi, are potential sources of known and novel natural products. The ever-increasing demand of potent drugs in the face of a less successful traditional plant-based industrial pipeline has virtually brought these enigmatic microorganisms to unprecedented biomedical prominence.
Coumarins, which are heterocyclic oxygenated substances found in plants, have been found in many families, including Rutaceae, Umbelliferae, Asteraceae, Fabaceae, Rosaceae, Solanaceae, and Moraceae, with approximately 200 coumarins identified in Rutaceae alone [20]. Since the first isolation of coumarins as a natural product from plants, they have been routinely implemented as herbal remedies starting from the onset of herbal medicine [21]. Coumarins are one of several groups of medicinally important compounds derived from fungal endophytes in plants, which also include alkaloids, flavonoids, glycosides, lignans, phenylpropanoids, quinones, saponins, terpenoids, xanthones, and other compounds. More complex coumarin derivatives, coumarin-fused heterocyclic compounds, have exhibited intriguing physiochemical properties and biological and pharmaceutical activities [22]. Coumarins have been investigated as one of the promising structures for the development of novel agents with higher specificity and affinity to molecular targets, and are characterized by their intrinsic properties as antimicrobial [23], antioxidant, anti-inflammatory [24][25][26], antiadipogenic [27], cytotoxic [28], apoptosis [29], antiproliferative [30], antimycobacterial activities against Mycobacterium tuberculosis [31], antileishmanial [32], antiviral [16][33], anticancer [34], and cytotoxic [35] agents. Due to this wide range of pharmacological values, coumarins and their derivatives have more importance in synthesis and production.

More
© Text is available under the terms and conditions of the Creative Commons Attribution (CC BY) license; additional terms may apply. By using this site, you agree to the Terms and Conditions and Privacy Policy.
Upload a video for this entry
Information
Subjects: Biotechnology & Applied Microbiology
Contributors MDPI registered users' name will be linked to their SciProfiles pages. To register with us, please refer to https://encyclopedia.pub/register :
Olga M. Tsivileva
,
Oleg V. Koftin
,
Nina V. Evseeva
View Times: 90
Revisions: 2 times (View History)
Update Date: 02 Sep 2022
Table of Contents
1000/1000
Hot Most Recent