+1 point
Thank you for your contribution! You can also upload a video entry related to this topic through the link below: https://encyclopedia.pub/user/video_add?id=26749
Check Note
2000/2000
Clinical Neurophysiology and Genetics of Dystonia Diagnosis

Dystonia diagnosis is based on clinical examination performed by a neurologist with expertise in movement disorders. Clues that indicate the diagnosis of a movement disorder such as dystonia are dystonic movements, dystonic postures, and three additional physical signs (mirror dystonia, overflow dystonia, and geste antagonists/sensory tricks). Despite advances in research, there is no diagnostic test with a high level of accuracy for the dystonia diagnosis. Clinical neurophysiology and genetics might support the clinician in the diagnostic process. Neurophysiology played a role in untangling dystonia pathophysiology, demonstrating characteristic reduction in inhibition of central motor circuits and alterations in the somatosensory system. The neurophysiologic measure with the greatest evidence in identifying patients affected by dystonia is the somatosensory temporal discrimination threshold (STDT). Other parameters need further confirmations and more solid evidence to be considered as support for the dystonia diagnosis. Genetic testing should be guided by characteristics such as age at onset, body distribution, associated features, and coexistence of other movement disorders (parkinsonism, myoclonus, and other hyperkinesia).

Dystonia is a term used to identify hyperkinetic movement disorders in which dystonia is the prominent feature. However, dystonia can also be present in other conditions. According to the etiology, dystonia can be distinguished as acquired, inherited, or idiopathic. The diagnosis of dystonia is based on clinical examination conducted by physicians with expertise in movement disorders through a careful examination of the phenomenology of the condition that allows for a classification of dystonia. For the diagnosis of dystonia syndrome, the examiner should follow the definition of dystonia approved in the last expert consensus [1], articulated in three subdefinitions:
The examiner should focus on the classic five physical signs of dystonia syndromes: two main physical signs (dystonic movements and dystonic posture) and three additional physical signs (mirror dystonia, overflow dystonia and geste antagonists/sensory tricks) [2][3].
The role of laboratory analysis, neuroimaging studies, neurophysiology, and genetic tests is to support the etiology definition of the disease, according to the Axis II of Dystonia classification [1][4].

Dystonia genetics is a wide field with continuous updates. After the first description of DYT-TOR1A, several other genes have been proposed as linked with the dystonia phenotype [50]. As in other fields of genetics, after the first years focused on the genetic marker, the focus is moving on to proteomics, searching the causal link between the protein produced by these genes and the phenotype of dystonia. Camargos and Cardoso [51] proposed a model of the “dystonia cell” linking the dystonic genes to the proteins function, based mainly on the classic DYT nomenclature.
The classic DYT nomenclature is based on locus symbols (e.g., DYT 1) and has been used for several years. It is still used in literature and clinical practice [52]. However, the system of locus symbols has been challenged by advances in techniques of genetics research that allow scholars to define the causative gene, as explained by Marras et al. [53], and the need to renovate the nomenclature system has arisen. The MDS Task Force for the Nomenclature of Genetic Movement Disorders proposed new recommendations, whose use in research and clinical practice is strongly encouraged [54]. This new nomenclature strictly connects the prefix to the predominant phenotype and considers the causative gene rather than the locus symbols (e.g., DYT 1 is now named DYT-TOR1A) [4]. The prefix DYT is used only if dystonia is the prominent disease feature due to a pathogenetic mutation [54]. Otherwise, if another movement disorder is a prominent feature along with dystonia, a double prefix would be assigned (e.g., DYT/PARK-ATP1A3). Indeed, genetic dystonia can be isolated or combined with other movement disorders such as parkinsonism, myoclonus, or other hyperkinesia (Figure 1). 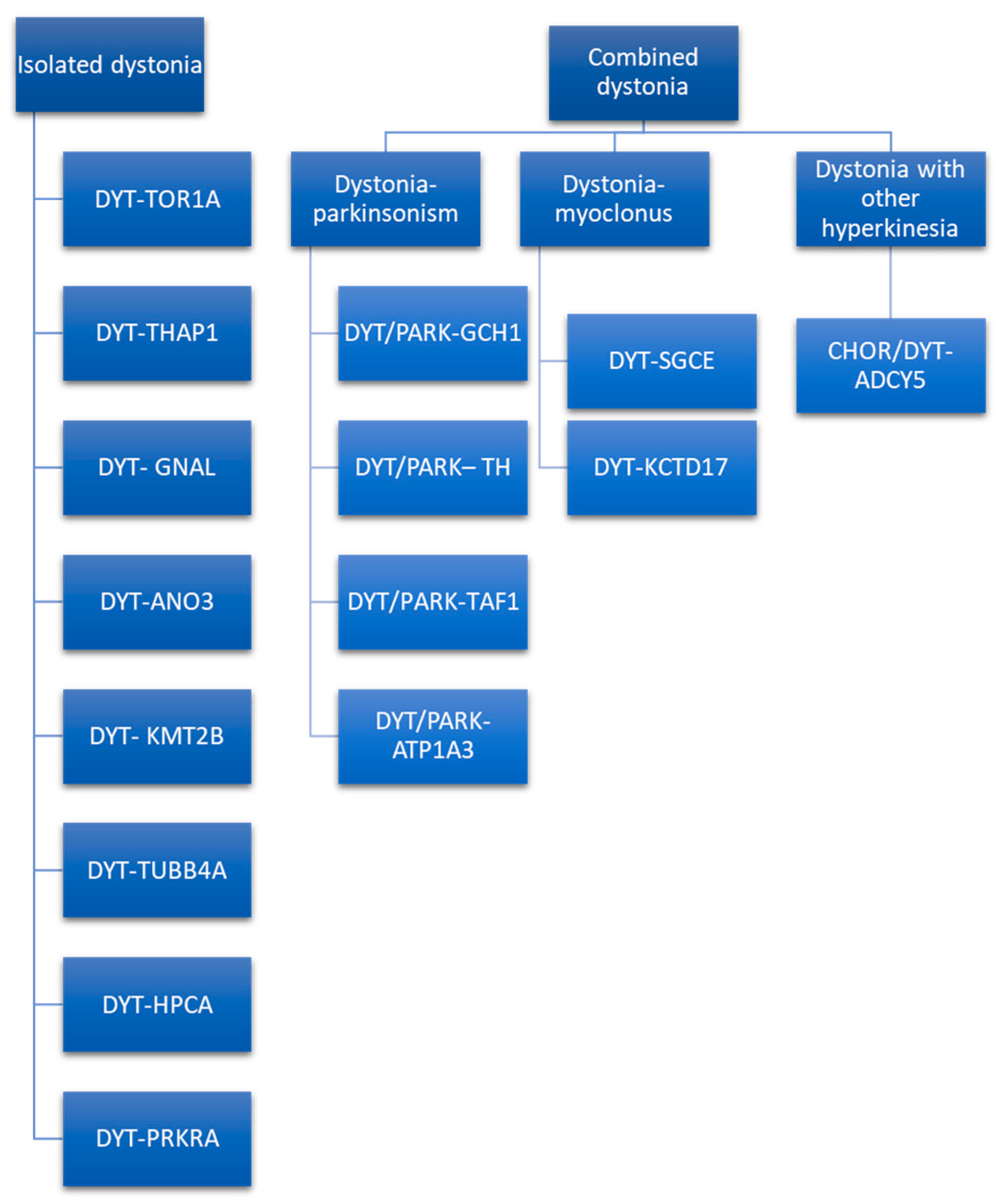