+1 point
Thank you for your contribution! You can also upload a video entry related to this topic through the link below: https://encyclopedia.pub/user/video_add?id=26690
Check Note
2000/2000
Generation of Chemerin Forms

Chemerin is the product of the RARRES2 gene which is secreted as a precursor of 143 amino acids. That precursor is inactive, but proteases from the coagulation and fibrinolytic cascades, as well as from inflammatory reactions, process the C-terminus of chemerin to first activate it and then subsequently inactivate it. Chemerin can signal via two G protein-coupled receptors, chem1 and chem2, as well as be bound to a third non-signaling receptor, CCRL2. Chemerin is produced by the liver and secreted into the circulation as a precursor, but it is also expressed in some tissues where it can be activated locally.

In a study identifying genes by subtractive hybridization in skin graft cultures that responded to treatment with a synthetic retinoid, tazarotene, a novel mRNA was identified that was named TAZAROTENE-INDUCED GENE 2 (TIG-2) [1]. Herein, it did not identify the role of the encoded protein, but to our knowledge this is the earliest report of the chemerin protein and gene.
An orphan receptor now known as chemerin receptor 1 (chem1, also known as chemokine-like receptor 1, CMKLR1; chemR23; DEZ) was identified as a receptor for TIG-2 protein, renamed as chemerin (also known by its gene name, retinoic acid receptor response protein 2, RARRES2) in studies in which biological fluids were evaluated for activity on cells overexpressing chem1, and those with high activity were purified through a multi-step procedure to yield a single protein. When that purified protein was analyzed by tryptic digestion, the sequence was identical to the protein encoded by the RARRES2 gene (TIG2) except for missing a few amino acids at the C-terminus [2][3][4].
The sequence of chemerin consists of a signal peptide allowing secretion, a core with 3 disulfide bonds, and N- and C-terminal tails (Figure 1a). No 3D crystal structure has yet been reported, although a preliminary NMR structure with most residues assigned but lacking the C-terminus is available [5]. A model is available in alphafold, predicting that there is a central domain with a relatively rigid structure containing the three disulfide bonds, while the N- and C-termini do not have tight rigid features (Figure 1b). This central domain has some structural similarities with the cathelicidin family of anti-microbial peptides as well as with the cystatin family of cysteine protease inhibitors [2][6]. It was clear from the first reports describing chemerin that the full-length protein needed to be proteolytically cleaved within the C-terminal tail to generate activity [2][4][7], and forms that ended at serine 157 were suggested to be the most active on the chemerin receptor, chem1. Forms that have been identified either from in vivo biopsy samples or from in vitro enzymatic studies are shown in Figure 1a.

Figure 1. Chemerin forms and chemerin’s predicted structure. Created with BioRender.com. (a) Chemerin forms that have been identified in biopsy samples are grouped into those that are precursors with no intrinsic activity but can be activated by appropriate proteolysis, those that are active, and those are inactive. (b) The structure of chemerin predicted by AlphaFold [8][9] with the darker blue colors representing higher per-residue confidence in the prediction with a magnification of the C-terminal tail.
Upon binding chemerin, chem1 signals via the Gi/o family of G proteins, thereby inhibiting production of cyclic AMP while increasing production of IP3 and calcium mobilization, in addition to the activation of phospholipase C and the PI3 kinase and MAPK pathways [10]. Stimulation of chem1 can also activate the RhoA/ROCK pathway [11] and induce binding of arrestins to chem1 [12][13], which can both terminate GPCR signaling and function as a framework for assembling signaling complexes [14].
Chemerin has been linked to two additional receptors, chemerin receptor 2 (chem2, also known as GPR1) and chemokine receptor-like 2 (CCRL2). The nomenclature of chemerin receptors used here is that determined by the International Union of Basic and Clinical Pharmacology Committee on Receptor Nomenclature and Drug Classification based on the receptor’s cognate ligand [15]. Both chem1 and chem2 are members of subclass A8 belonging in the rhodopsin class of G protein-coupled receptors (GPCRs). CCRL2 does not encode a full serpentine G protein-coupled receptor GPCR and is not a signaling receptor but binds chemerin and can present it to the signaling receptors chem1 and chem2 [16]. The three receptors and chemerin together comprise the chemerin system.

The chemerin gene (RARRES2) is found in all tetrapods that have been sequenced but there is no gene annotation for chemerin in fish (Figure 2). The gene consists of 6 exons of which 5 encode the protein sequence. The pattern of introns and exons as well as the encoded protein sequences have been conserved suggesting that chemerin has a significant role in tetrapod biology. In particular the C-terminal tail, responsible for binding to its receptors, chem1 and chem2, has been conserved. The gene has four exons, with the first exon encoding the signal sequence and most of the N-terminal tail, the central core being encoded by the other three exons, with the last exon encoding the final part of the central core and the C-terminal tail. In humans, the RARRES2 locus is on chromosome 7 on the antisense strand and on chromosome 6 in mice. 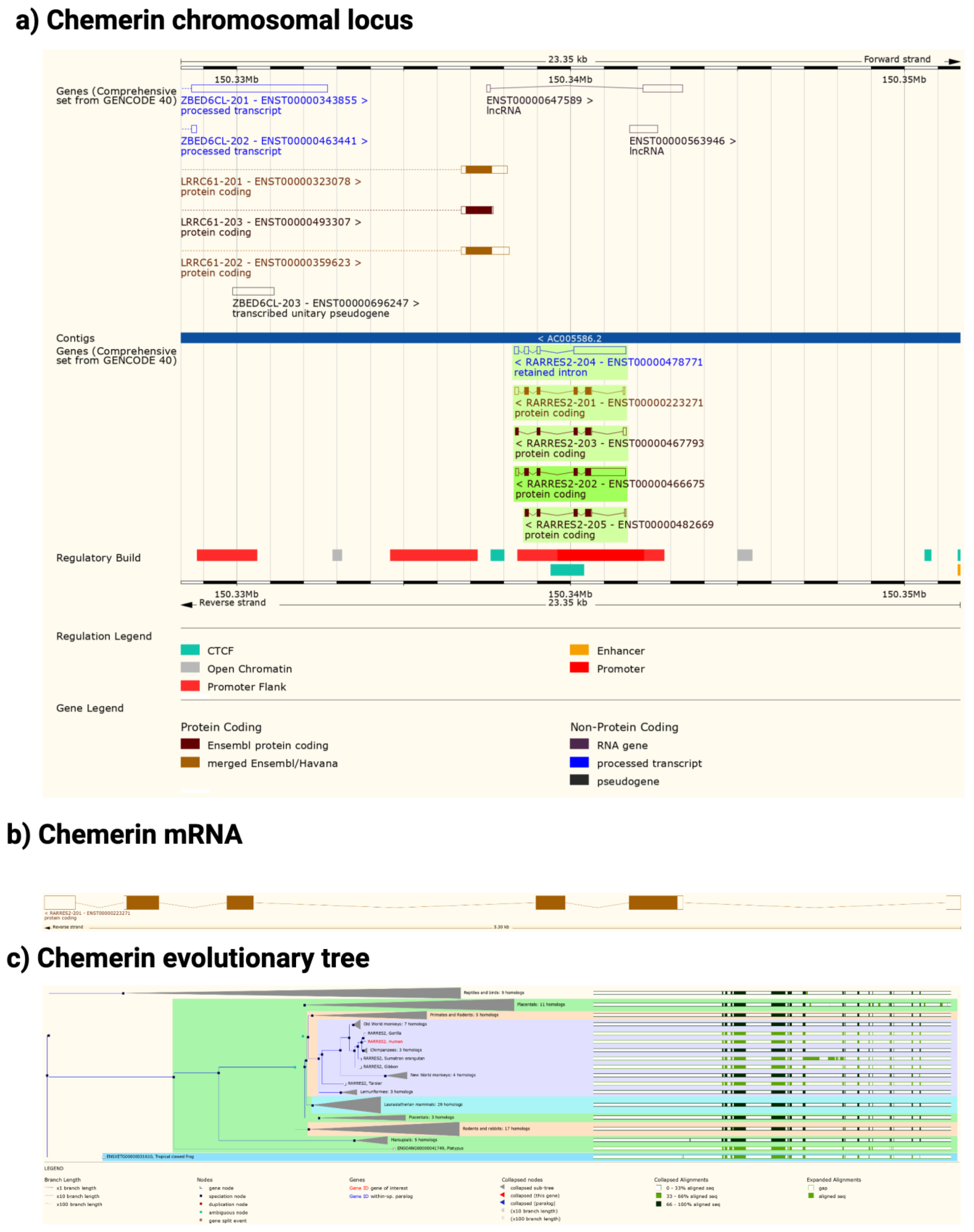 Figure 2. Chemerin gene (Rarres2), mRNA, and evolutionary tree. (a) Chromosomal neighborhood of the chemerin gene on chromosome 7. Chemerin in green on anti-sense strand. (b) Chemerin mRNA with 6 exons in boxes, filled if coding. (c) Evolutionary tree for the chemerin gene. Figures created from data in EMSEMBL human genome build GRCH38.p13 (https://ensembl.org/Homo_sapiens accessed on 11 August 2022).
In both humans and mice there is a coding gene on the sense strand, leucine rich repeat containing 61 (LRRC61) with it 3′ terminus close to the 3′ terminus of chemerin. In humans but not mice there is also an lncRNA present in the middle of the chemerin locus on the sense strand as well as a pseudogene, ZBED6CL that overlaps with the LRRC61 gene (Figure 2a). In both humans and mice five alternative spliced chemerin mRNAs have been described, but in both species there is one major coding form.
Chem1 and chem2 are similar to each other and belong to the same clade within the GPCR family, clade A8, which includes receptors for small peptides such as bradykinin and apelin. Both chem1 and chem2 genes can be identified not just in tetrapods but also in bony fish, and chem1 can be found additionally in cartilaginous fish. In addition to chemerin, chem1 and chem2 have alternative ligands for these receptors such as the resolvins E1 and E2 [17][18][19], and they may be a clearance receptor for amyloid beta in Alzheimer’s disease [20].
The chemerin system has been studied in model organisms such as mice and rats, as well as humans. In addition, there are data on the chemerin system in cattle, pigs, and chickens [21].

Although the chemerin gene was originally identified as being responsive to a retinoic acid receptor ligand, tazarotene [1], there have been few follow-up studies on the chemerin promoter and control of chemerin mRNA expression. The major regulatory elements controlling constitutive expression were shown to lie in the region between −252 and +258 bp around the start of mRNA transcription at +1 bp [22]. Differences in responses to IL-1b and oncostatin-M were found between hepatocytes and white adipocytes in which there was increased transcription at the chemerin promoter in adipocytes but not in hepatocytes. Those changes correlated with changes in methylation, and the list of transcription factors predicted to interact with the chemerin promoter also differed between the cell types.

4. Different Forms of the Chemerin Protein

The human chemerin cDNA encodes an open reading frame of 163 amino acids translated into preprochemerin (Figure 1 and Figure 3a), of which the first 20 comprise the signal peptide which is removed upon secretion to generate the 143 amino acid protein terminating at Ser163 [23]. When it was isolated from human ascitic fluid secondary to ovarian or liver cancer, the analysis of chemerin protein by tryptic digestion followed by mass spectrometry showed that the protein’s C-terminus was at Ser157. This was different from the C-terminus predicted from its encoding cDNA, which extends a further 6 amino acids to Ser163 [2]. Purified chemerin proteins from hemofiltrate were also found to be truncated compared to the full-length protein and were identified as terminating at Phe154 [3].