+1 point
Thank you for your contribution! You can also upload a video entry related to this topic through the link below: https://encyclopedia.pub/user/video_add?id=26680
Check Note
2000/2000
Phytoplasma Taxonomy

Phytoplasmas are pleomorphic, wall-less intracellular bacteria that can cause devastating diseases in a wide variety of plant species. Rapid diagnosis and precise identification of phytoplasmas responsible for emerging plant diseases are crucial to preventing further spread of the diseases and reducing economic losses. Phytoplasma taxonomy (identification, nomenclature, and classification) has lagged in comparison to culturable bacteria, largely due to lack of axenic phytoplasma culture and consequent inaccessibility of phenotypic characteristics. However, the rapid expansion of molecular techniques and the advent of high throughput genome sequencing have tremendously enhanced the nucleotide sequence-based phytoplasma taxonomy.

Traditional polyphasic approach, which integrates phenotypic and genotypic data and reflects the ecological nature of the bacteria, is considered as the gold standard for bacterial taxonomy [1]. The phenotypic markers mainly include morphological, physiological, and biochemical characteristics of cultivatable bacteria [2]; however, inability to culture phytoplasma in vitro impeded the accessibility of the above-mentioned phenotypic characteristics to differentiate phytoplasmas. Several decades ago, scientists attempted to distinguish phytoplasmas by using symptoms induced by phytoplasmas, plant host range, insect vector specificity and serological correlations as markers, but were ultimately unsuccessful due to lack of consistency [3][4][5][6][7]. The subsequent development of culture-independent modern genotypic approach based on heredity information has rapidly and considerably enhanced the entire bacterial systematics, providing high levels of resolution and differentiation. In particular, the advent of DNA sequencing technology and exploitation of 16S rRNA gene sequences have tremendously facilitated taxonomy, tree of life, evolution, and diversity studies of unculturable bacteria [8][9][10]. Based on 16S rRNA gene sequences, many bacteria have been reclassified and renamed [11][12].
As with many other unculturable bacteria, the higher rank taxa of phytoplasmas (Mycoplasmatota [originally named Tenericutes]/Mollicutes/Acholeplasmatales/incertae sedis—Family II) were named in the absence of type genus and species [13][14][15]. While the Candidatus status was used to reserve the putative lower rank taxa (Genus and Species [16]). The term Candidatus was first introduced in 1994 to nonculturable bacteria, granting appropriate status of potential taxa based on 16S rRNA gene sequences ([16]; Figure 1). Candidatus is not a rank, nor is it governed by Prokaryotic Code [17]. Currently, all phytoplasma strains are accommodated within the provisional Candidatus Phytoplasma genus. The main function of the phytoplasma taxonomic nomenclature system is naming ‘Candidatus Phytoplasma’ species as species is the most basic taxon of bacteria [18]. 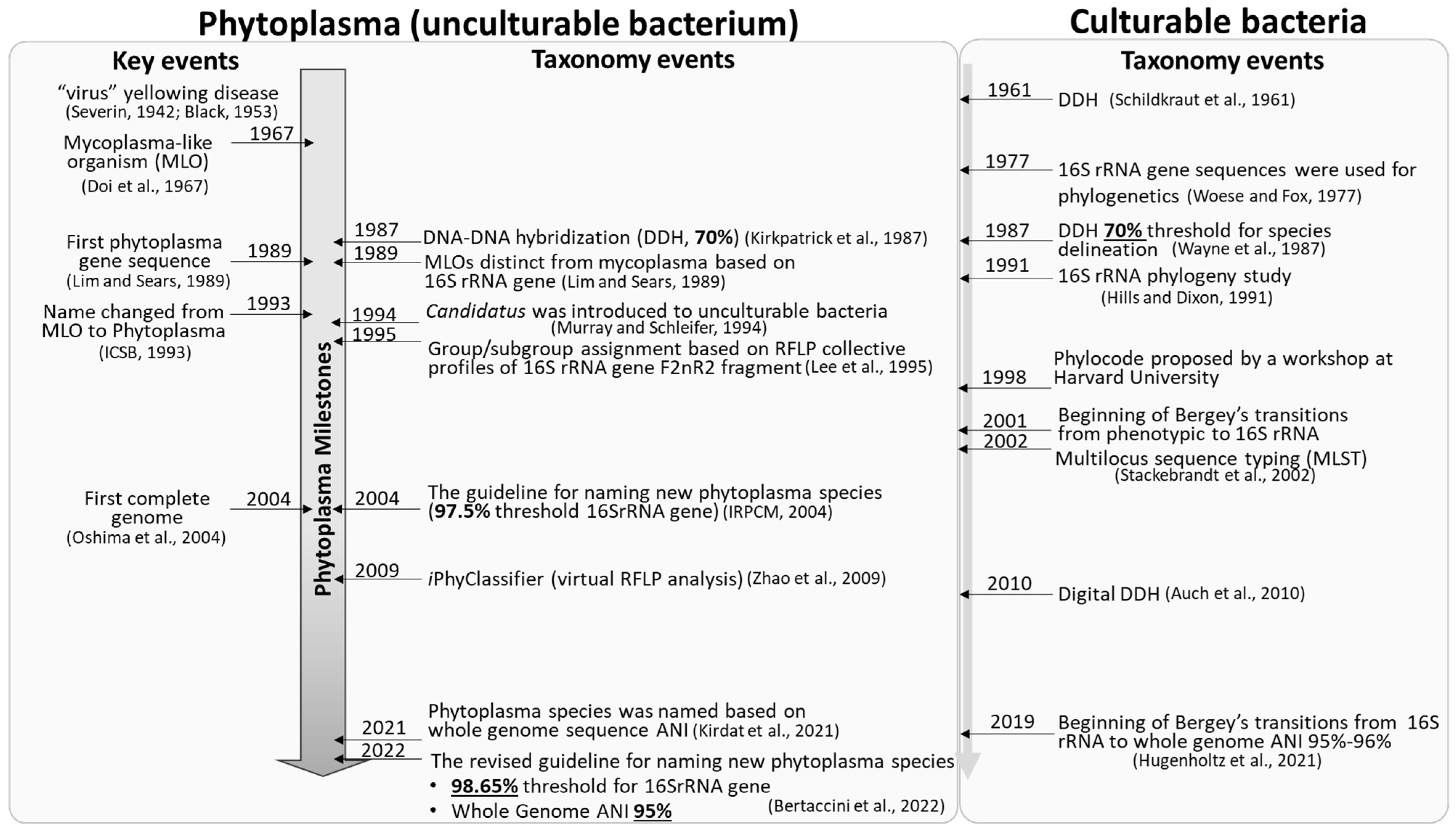 Classification is the systematic and orderly arrangement of organisms into groups or categories according to established criteria. Different from taxonomic nomenclature system, a classification scheme is often designed to meet practical needs, emphasizing less academic significance. Therefore, different scientists may classify the same organism differently [37]. Phytoplasma classification also has followed this principle. Phenotypic approaches such as symptomology, vectorship, and serology were employed to classify phytoplasmas in early days, but this has proved not suitable or practical [38][39] as in many cases the same phytoplasma strain may induce different symptoms in different hosts, and different phytoplasma strains may share a common vector or cause diseases exhibiting similar symptoms [40]. Until the 1990s, the 16Sr group/subgroup classification scheme was established based on RFLP profiles of PCR amplified F2nR2 fragment of the 16S rRNA gene [11][26][41][42]. This classification system is most widely adopted by phytoplasma researchers so far [43][44][45][46].
The RFLP-based phytoplasma classification scheme exploits a high-resolution subset of the 16S rRNA gene characteristics, namely, the recognition sites of 17 restriction enzymes, to differentiate diverse phytoplasmas [26][40]. The 16Sr groups delineated with this RFLP classification scheme are consistent with the 16S rRNA gene phylogenetic clades. More advantageously, by distinguishing subtle pattern differences, this RFLP analysis-based scheme is able to identify and distinguish different subgroup lineages within any given group [27][41][47][48]. Operationally, traditional RFLP analysis requires actual enzymatic gel electrophoresis and visual comparisons of various banded patterns. It is inconvenient, and few people are willing to do that anymore. The current virtual RFLP analysis approach is operated based on DNA sequences but retains the principles and criteria of the original phytoplasma classification scheme. Using accurate sequence data, the virtual gel patterns generated by computer simulated RFLP analysis can faithfully duplicate the classical and authoritative patterns established by conventional RFLP analysis. The new pattern types derived from virtual RFLP analysis have also been confirmed by actual enzymatic gel electrophoresis [47]. Furthermore, based on the virtual RFLP analysis approach, the interactive online tool iPhyClassifier was constructed, enabling and facilitating database-guided phytoplasma classification and identification [27].
Some scientists might think that the RFLP approach is obsolete. The truth is RFLP analysis still plays an important role in the classification and differentiation of many unculturable and fastidious bacteria, and fungi [49][50][51]. Examples include classifications of genus Basidiobolus [50] and genus Vibrio [51]. In the past five years (2017 to present), around 15,000 papers have been published on the classification and differentiation of bacteria and fungi based on RFLP analysis, including nearly 1600 articles on phytoplasma classification and identification. Computer-simulated virtual RFLP analysis undoubtedly enhanced the applicability of the RFLP analysis-based classification.
Importantly, the 16Sr group/subgroup classification system complements ‘Candidatus Phytoplasma’ species affiliation assignment. A striking example is the aster yellows (AY) phytoplasma group, which contains hundreds of known strains around the globe. The current taxonomic system assigns all the AY strains as ‘Ca. Phytoplasma asteris’-related strains, which grossly masks the differences among the strains. On the other hand, the existing 16Sr group classification scheme can differentiate the AY strains into more than two dozen subgroups, each of which has its own unique RFLP profile. In addition, some subgroups are only (or predominantly) present in certain geological regions and associated with different ecological niches [46][51].
In addition, in certain cases, the current phytoplasma taxonomic system may even have difficulty to assign certain strains to the existing ‘Ca. Phytoplasma’ species. For example, a strain (KJ452548) in the elm yellows phytoplasma group shares 99.1–99.3% identities with ‘Ca. Phytoplasma ulmi’- and ‘Ca. Phytoplasma ziziphi’-related strains in their 16S rRNA gene sequences. So, what species should this strain be affiliated with, ‘Ca. Phytoplasma ulmi’ or ‘Ca. Phytoplasma ziziphi’? Well, the RFLP-based group/subgroup classification system can at least provide distinguishing RFLP markers to separate them and classify the strain into a new subgroup other than 16SrV-A and 16SrV-B. This example strongly demonstrates that the group/subgroup classification system effectively avoids the ambiguity caused by the term, ‘Candidatus Phytoplasma sp.’-related strain, and helps diagnosticians and regulatory agencies distinguish closely-related phytoplasma strains.
In 2007, based on the virtual RFLP analysis of all 16S rRNA gene sequences available at the time (F2nR2 fragment of about 1250 bp), the number of phytoplasma classification groups was expanded from 19 to 28 (16SrXIX-16SrXXVIII), and some potentially new species were proposed with suggested reference strains (Table 1). In the present research, groups/subgroups corresponding to Candidatus Phytoplasma species, especially the newly named species are updated (Table 1 [52][53][54][55][56][57][58][59][60][61][62][63][64][65][66][67][68][69][70][71][72][73][74][75][76][77][78][79][80][81][82][83][84][85][86][87][88][89][90]). Two new groups (16SrXXXVIII and 16SrXXXIX) are established based on the criterium which requires the collective F2nR2 RFLP pattern of any new group representative has a similarity coefficient of <0.85 with that of all previously recognized 16Sr groups [47]. The reference strains of ‘Ca. Phytoplasma noviguineense’ and ‘Ca. Phytoplasma dypsidis’ were designated as representative strain of 16SrXXXVIII-A (LC228755) and 16SrXXXIX-A (MT536195), respectively.
Table 1. An updated list of 16Sr groups/subgroups corresponding to named Candidatus Phytoplasma species.
* Abolished: ‘Ca. Phytoplasma australasia’ was originally described by White et al. [54]. It was later removed from the ‘Ca. Phytoplasma’ species list by the IRPCM as its 16S rRNA gene sequence shares 99.5% sequence identity with that of ‘Ca. Phytoplasma aurantifolia’ and there is no evidence that it represents an ecologically separated population [18]. ‘Ca. Phytoplasma australasia’ was erroneously included in 2022 guidelines [29] and should be removed.
Currently, there are a total of 37 groups and 48 named Candidates phytoplasma species (Table 1). Each group should contain at least one Candidatus species [93]. As shown in Table 1, nearly ten novel groups have been identified since 2007 (16SrXXIX-16SrXXXIX). However, it is noteworthy that no new phytoplasmas have been identified in groups 16SrXXIII-16SrXXVIII during the past 15 years. This suggests that the phytoplasmas belonging to these groups may be rare or the sequences representing these groups contain errors. In addition, the researchers also noted that several pairs of strains share high sequence identity, but very low RFLP similarity coefficients. Such discrepancy might be caused by indels or sequencing errors that occurred within restriction enzyme recognition sites.

More
© Text is available under the terms and conditions of the Creative Commons Attribution (CC BY) license; additional terms may apply. By using this site, you agree to the Terms and Conditions and Privacy Policy.
Upload a video for this entry
Information
Subjects: Microbiology; Pathology
Contributors MDPI registered users' name will be linked to their SciProfiles pages. To register with us, please refer to https://encyclopedia.pub/register :
Wei Wei
,
Yan Zhao
View Times: 125
Revisions: 6 times (View History)
Update Date: 01 Sep 2022
Table of Contents
1000/1000
Hot Most Recent