Submitted Successfully!
Thank you for your contribution! You can also upload a video entry related to this topic through the link below:
https://encyclopedia.pub/user/video_add?id=2643
Check Note
2000/2000
Aptamer-Sensors for Quantification of AFB1
Edit
Upload a video
This entry is adapted from 10.3390/app9112364

Aflatoxin B1 (AFB1) is one of the most frequently-found mycotoxins in contaminated food. As the content of mycotoxins is particularly low in food, the development of probes to detect AFB1 in foods with high sensitivity and selectivity is an urgent social need for the evaluation of food quality. Numerous techniques have been developed to monitor AFB1. Nevertheless, most of them require cumbersome, labor-consuming, and sophisticated instruments, which have limited their application. An aptamer is a single, short nucleic acid sequence that is capable of recognizing different targets. Owing to their unique properties, aptamers have been considered as alternatives to antibodies. Aptasensors are considered to be an emerging strategy for the quantification of aflatoxin B1 with high selectivity and sensitivity.

Mycotoxins are a class of secondary metabolites produced by molds that are widely distributed in nature and are highly common in food contamination [1]. When humans and animals take in mycotoxins through food, they can cause a decline in body function, which can lead to illness or death [2]. Common mycotoxins are ochratoxins, fumonisins, aflatoxins, citrinin (CTN), and zeallenone (ZEN) [3]. Among them, aflatoxin (AF) is a kind of highly-toxic secondary metabolite produced by the fungi Aspergillus flavus, as well as Aspergillus parasiticus. It has been reported that aflatoxin is a highly stable natural mycotoxin [4]. Aflatoxins show strong heap-toxicity after entering human or animal bodies, which can cause liver hemorrhage, steatosis, bile duct hyperplasia, and liver cancer [5]. People and animals mainly ingest aflatoxins through dietary channels. With the occurrence of aflatoxin contamination, the pollution of aflatoxin in food has gained attention in countries all over the world. The detection of aflatoxin in food has become a hot subject for scholars at home and abroad. Among various aflatoxins, AFB1 is the most common and toxic, owing to its capacity to forbid the RNA synthesis of cells, which can largely increase the risk of liver cirrhosis, necrosis, and carcinoma in human beings and animals. The cancer research organization of the World Health Organization has classified it as a Class I carcinogen.

A large number of technologies have been developed for the quantification of AFB1, such as high-performance liquid chromatography [6][7], liquid chromatography-mass spectrometry [8][9], and thin-layer chromatography [10]. Although these methods are very mature, they are hindered by cumbersome operations, long detection cycles, complicated sample pre-processing, rapid screening for large numbers of samples, expensive instruments, and inconvenient portability, which limit their detection ability in practical applications [11]. In recent years, methods for detecting aflatoxins based on antibody-linked immunosorbent assays have been developed, to some extent. However, these methods, which use antibodies as recognition molecules, are expensive, unstable, and prone to false-positive detection results [12]. Therefore, it is particularly urgent and important to develop low-cost, high-sensitivity methods for the detection of aflatoxins in actual samples, such as foods and related products.

With the recent developments in biotechnology, a biomolecule—called a nucleic acid aptamer (aptamer)—has been widely used in biosensors. Aptamer is a nucleic acid ligand and, furthermore, it is an index-enriched ligand. Aptamer is a nucleic acid ligand that was exponentially enriched by the phylogenetic technique. The phylogenetic technique SELEX screens a single-stranded oligonucleotide in vitro to specifically bind small molecules, proteins, bacteria, viruses, cells, and the like [12][13]. In the field of analysis and diagnosis, nucleic acid aptamers have many advantages (compared with traditional antibodies), including convenient preparation, specificity, stability, ease of modification, strong affinity, and wide range of target molecules [14][15]. As an emerging biomarker probe and recognition molecule, it is widely used in the construction of biosensors, and its application in disease diagnosis and treatment, proteomics research, biosensing and toxin sensing, microbial detection, and other fields [16][17]. With the continuous improvement and combination of nucleic acid aptamers, rapid biotoxin detection technologies will be more portable, more stable, and more efficient, giving great advantages.

As an oligonucleotide fragment, a nucleic acid aptamer does not have a signal transduction function. Its recognition and binding process, specific to a target molecule, does not produce a detectable physicochemical signal. Therefore, there is a need for a process to convert the specific recognition-binding process of a nucleic acid aptamer to a target substance into a readily-detectable optical signal change. As shown in Figure 1, this review focuses on the application of nucleic acid aptamer sensors in AFB1 detection, based on colorimetric, electrochemical, fluorescent, and surface-enhanced Raman scattering aptamer sensors, in recent decades. 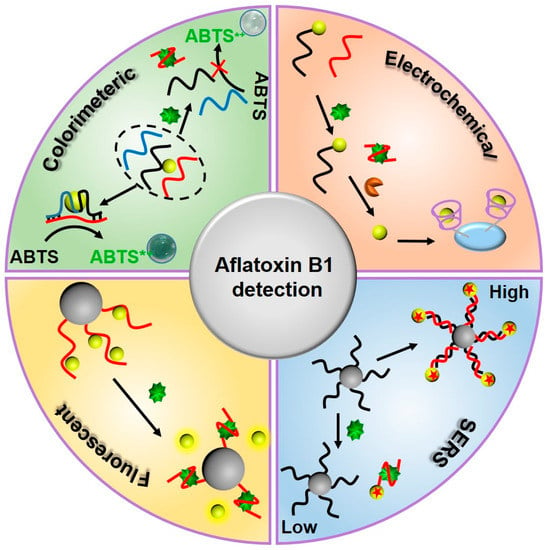 A variety of classical strategies have been employed for the detection of AFB1; however, their drawbacks, including time consumption, expensive equipment, and low portability, have limited their further use. On account of the high selectivity of aptamers toward specific targets, aptamers can be used to replace antibodies for the quantification of analytes. In this review, we described various aptamer probes for the detection of AFB1. As listed in Table 1, the probes consist of colorimetric, electrochemical, and fluorescent methods. The probes utilize colorimetric, electrochemical, and fluorescent methods. Although great breakthroughs have been made, the stability of aptamer probes should be improved by the modification of DNA. Moreover, aptamer probes associated with signal amplification strategies can be employed to improve the sensitivity of the probe.

More
© Text is available under the terms and conditions of the Creative Commons Attribution (CC BY) license; additional terms may apply. By using this site, you agree to the Terms and Conditions and Privacy Policy.
Upload a video for this entry
Information
Subjects: Chemistry, Applied
Contributor MDPI registered users' name will be linked to their SciProfiles pages. To register with us, please refer to https://encyclopedia.pub/register :
Yongmei Jia
View Times: 334
Revisions: 2 times (View History)
Update Time: 19 Oct 2020
Table of Contents
1000/1000
Hot Most Recent