Submitted Successfully!
Thank you for your contribution! You can also upload a video entry related to this topic through the link below:
https://encyclopedia.pub/user/video_add?id=2640
Check Note
2000/2000
Antigorite
Edit
Upload a video
This entry is adapted from 10.3390/lubricants8100093

Antigorite is a Mg-rich 1:1 trioctahedral-structured layered silicate mineral of the serpentine group. Antigorite with layered structure can be used as a lubricant and friction reducing material to repair the friction pair of iron agent on line.

Layered minerals are known as laminar structure minerals or layer lattice minerals, have layer crystal structure in which the atoms within a layer are held together by a chemical bond stronger than the bond between the layers. This provides an isotropic shear property with preferred easy shear parallel to the basal planes of the crystallites, and result in the ability of basal planes to slide easily over one another [1]. This may be the reason that layered minerals can provide low friction coefficients and be used as solid lubricants [2][3][4].

The earlier researches on frictional behavior of antigorite were conducted by geologists and geophysicists, with the intent of seeking information about the strength and sliding stability of natural faults containing antigorite [5][6][7][8][9][10][11]. In the recent decades, there has been considerable interest in using antigorite to reduce friction and wear of machinery and equipment. Significant progress has been achieved in the research and development of antigorite’s application in the lubrication of machine components. The research results indicated that antigorite micro–nano powder (AMNP) may significantly reduce friction coefficient and wear of friction pairs, and be one kind of excellent anti-frictional and lubrication materials [12][13][14][15][16][17][18][19][20][21][22][23][24][25][26][27].

2. Mineralogy and Powder Characteristics of Antigorite

Antigorite belongs to the group of trioctahedral 1:1 layered silicates, consisting of one tetrahedral (T) and one octahedral (O) sheet. The T sheet is formed by the two-dimensional polymerization of Si-centered tetrahedra sharing three out of four oxygen atoms with other tetrahedra. The unshared oxygen atoms are bonded to Mg atoms that jointly with OH groups form the octahedral sheets (O sheet). The T- and O- sheets are variably arranged and stacked one above another, and the thickness of the T-sheet is thinner than that of the O- sheet, resulting is a subtle dimensional misfit between the two. This misfit can be reduced by substitutions in the tetrahedron, which in turn reduces interlayer strain and consequently enhances the mineral’s stability [28][33]. The layers in the structure are linked by hydrogen bonds that form by pairing oxygen on the basal tetrahedral surface of one layer with an OH-group on the upper octahedral surface of the layer below. These bonds are generally long and weak but can be modified by the degree of substitution [33]. This crystal structure gives rise to typically platy or lamellar along (001) and perfect cleavages on {001} of antigorite. 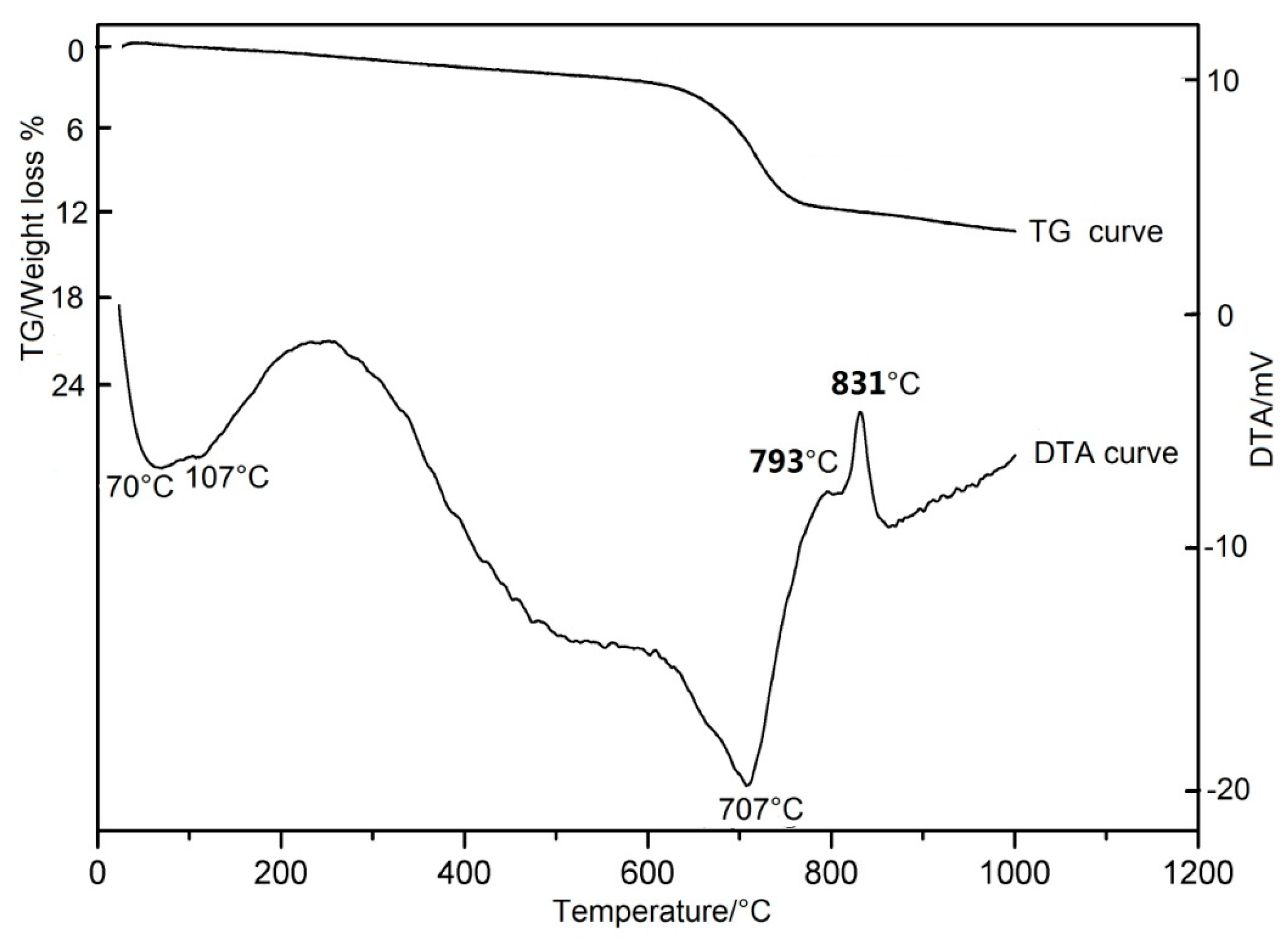 Natural antigorite is commonly bladed or fibrous. The antigorite as a lubrication material is usually bladed or lamellar (Figure 2), and processed into micro-nano scale powders by powder processing equipment [4][21][22][23].

Figure 2. Bladed and lamellar antigorite [4]. (a,b) are different particles in the same sample.

Antigorite showed a positive zeta potential over a wide pH range with a pH value of close to 10 at its isoelectric point [38], which is readily wetted by water and is said to be hydrophilic [39][40][41]. In order to improve the compatibility of AMNP and organic lubrication medium, the surface modifications of AMNP have been investigated [19][21][22]. The formation of organically modified antigorite is carried out by applying the surfactants as boric acid ester, sorbitan monostearate (Span60), polysorbate 60 (Tween60), oleic acid, polyvinyl pyrrolidone (PVP), silane coupling agent (HK560), sodium dodecyl benzene sulfonate, trolamine, stearic acid, sodium stearate [19][21][22][42][43][44][45]. The studies investigating the surface modifications of AMNP have shown that modified powders present superior dispersion and suspension stability in the nonpolar solvent. It was found that the modifiers of oleic acid or Span60 combined with borate at 1:1 (mass ratio) had the best modification effect on AMNP [44].

Lubricity and anti-wear of antigorite may be related to its lamellar morphology, medium hardness, abundant hydroxyl water and surface unsaturated charge, strong ion exchange capacity, easy to slide between layers and high temperature phase transition. Under the action of friction kinetic energy and heat energy, the bladed AMNP forms a friction reaction layer having low roughness and high hardness on the friction pair surface by abrasive polishing and ion exchange, which effectively reduces the friction resistance and wear of the friction pairs.

As a lubricant additive, AMNP should have a bladed morphology with a blade diameter less than 2 microns, and should be subject to surface modification of organic matter.

The AMNP can be mixed with different types of lubricating oil to form a suspended solution, or evenly mixed with base grease to make a complex grease, or mixed with matrix materials (such as PTFE and Al alloys) to make solid composite materials. AMNP used as a lubricant additive for PTFE can significantly reduce the wear of PTFE, which can extend the service life of the PTFE friction seal components.

As already noted, the tribological properties of calcined AMNP under 300 °C are better than that of the uncalcined AMNP. The AMNP used as a lubricating material should not be calcined at temperatures >600 °C.

The application of AMNP in industrial equipment could reduce friction wear and improve cylinder pressure; reduce the consumption of engine fuel and lubricating oil, as well as the temperature of lubricating medium and the emission of pollution, obviously prolong the service life of the friction parts of the equipment, extend the overhaul period of the equipment and improve the service efficiency.

Antigorite as a lubricant has not yet formed a set of standards and specifications, which is a technical obstacle that restricts the large-scale application of AMNP in industry.

In published papers, some authors indiscriminately refer to “antigorite” as “serpentine”. In fact, the “serpentine” is a group of minerals that contains lizardite, antigorite and chrysotile [46]. Although the three minerals share the same composition (Mg6Si4O10(OH)8), they have different structures. Lizardite shows an ideal layer topology, whereas antigorite is a modulated layer and chrysotile is a bent layer. Of the three minerals, antigorite is currently the only additive lubricant, while fibrous chrysotile is not used because of its potential environmental hazards. The authors suggest that “antigorite” rather than “serpentine” should be used as a lubricant.

More
© Text is available under the terms and conditions of the Creative Commons Attribution (CC BY) license; additional terms may apply. By using this site, you agree to the Terms and Conditions and Privacy Policy.
Upload a video for this entry
Information
Subjects: Geology
Contributor MDPI registered users' name will be linked to their SciProfiles pages. To register with us, please refer to https://encyclopedia.pub/register :
zhimin bai
View Times: 464
Revisions: 4 times (View History)
Update Time: 26 Oct 2020
Table of Contents
1000/1000
Hot Most Recent