Submitted Successfully!
Thank you for your contribution! You can also upload a video entry related to this topic through the link below:
https://encyclopedia.pub/user/video_add?id=261
Check Note
2000/2000
Health-Promoting Beverages
Edit
Upload a video

Tea, a beverage made from the processed leaves of the tea plant, Camellia sinensis, and herbal infusions, were primarily consumed to their pleasant taste. Nowadays, are also consumed due to the existence of nutraceutical compounds in the herbs used, such as polyphenols.

Plant infusions, commonly called teas or tisanes, are the most popular form of herbal medicine in the world, being used for thousands of years. In fact, the habit of consuming teas and herbal infusions is increasingly embedded in the routine of Americans and Europeans [1] due to their potential health benefits, attractive flavor, and taste, or for its relatively low retail price [2].

1.2. Tea and Other Herbal Infusions

White, green, oolong and black tea are different types of tea made from the leaves of the same species, Camellia sinensis, being the difference among them the post-harvest treatment which modifies the color of its leaves, its aroma, flavor, and number of polyphenols present (Figure 1). 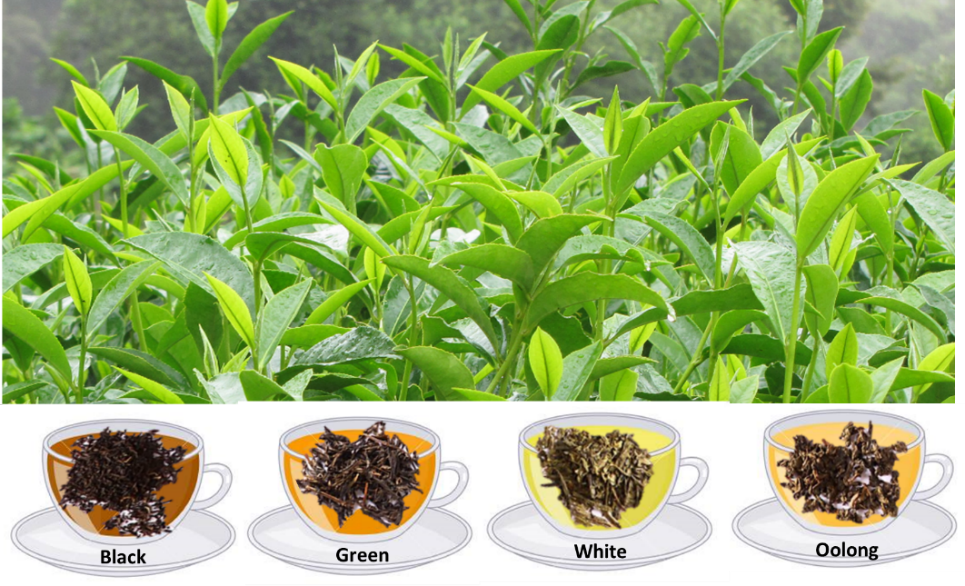 White tea, made from new growth buds and young leaves, is the least processed of all teas and, as a result, it has the most delicate flavor and aroma. The leaves are not rolled or crushed during processing but are plucked and dried in the sun and shade. This type of tea can be semifermented or non-fermented and releases the least amount of caffeine among all teas[7]. Sweet or flowery flavors are characteristic of this type of tea. The name “white tea” is due to the fact that it is made from unfolded tea buds with white trichomes which give a silvery appearance. It is one of the most expensive teas for the consumer [6]. White tea is consumed essentially by people concerned about their health since, because of its characteristics, it is considered to have a high therapeutic value [8].

Green tea is a less fermented tea and contains the highest quantity of tea catechins. To produce this type of tea, the leaves are steamed or pan-roasted to inactivate their enzymes and then are dried; drying preserves their constituents[7]. The main chemical constituents of dried green-tea leaves are polyphenols (37%), carbohydrates (25%), caffeine (15%), and amino acids (6.5%)[9]. Green tea has a fresh, grassy flavor, being more astringent and subtler than oolong or black tea[10].

Oolong tea is semi-fermented and also known as a hybrid of black and green tea. With characteristics of both black and green tea, sweet, fruity, and flower-like odors, this type of tea is the most preferred in China. Originally produced with C. sinensis var. sinensis in Fujian Province in southeast China, it is nowadays also cultured in other regions of China together with other subspecies such as C. sinensis var. assamica[11].

Black tea is a totally fermented tea. Fermentation is an extremely important process for the development of tea aroma and flavor, which change progressively as the process develops. In fact, the scent of black tea depends on the formation of volatile substances consisting of essential oils and other molecules like amino acids[12]. Biochemically, the so-called “fermentation” process is, in fact, an oxidation which involves enzymatic reactions: after rupture, the tea leaves expose the cell sap (juice that is simply the cytoplasmatic content), whose chemical constituents and enzymes react in the presence of atmospheric oxygen[13][14]. The enzymes polyphenol oxidase and peroxidase act on catechins in the presence of oxygen and form oxidized polyphenolic compounds such as theaflavins and thearubigins[15]. The leaves’ cells are ruptured by rolling the leaves. According to Carloni and coworkers[16], this can be done by two distinct methodologies: using the “crush–tear–curl” process, which allows obtaining small particles suitable for tea bags, or using rolls, which provide large-leaf tea. Black teas are distinct for their honey and flower-like flavor[10].

Infusions can be prepared from a great diversity of edible, aromatic, and medicinal plants, besides C. sinensis. The beverages obtained, since antiquity, are very pleasant due to their attractive flavor, taste, and biological and physiological functions, which are beneficial for human health[17][18]. Currently, the demand and use of plants to obtain infusions with medicinal purposes are increasing, and a great variety of these herbal products are available on the market. Many are obtained from plants that are familiar to the consumers. Table 1 shows some examples of aromatic and medicinal plants commonly used for the preparation of infusions, as well as their main benefits. 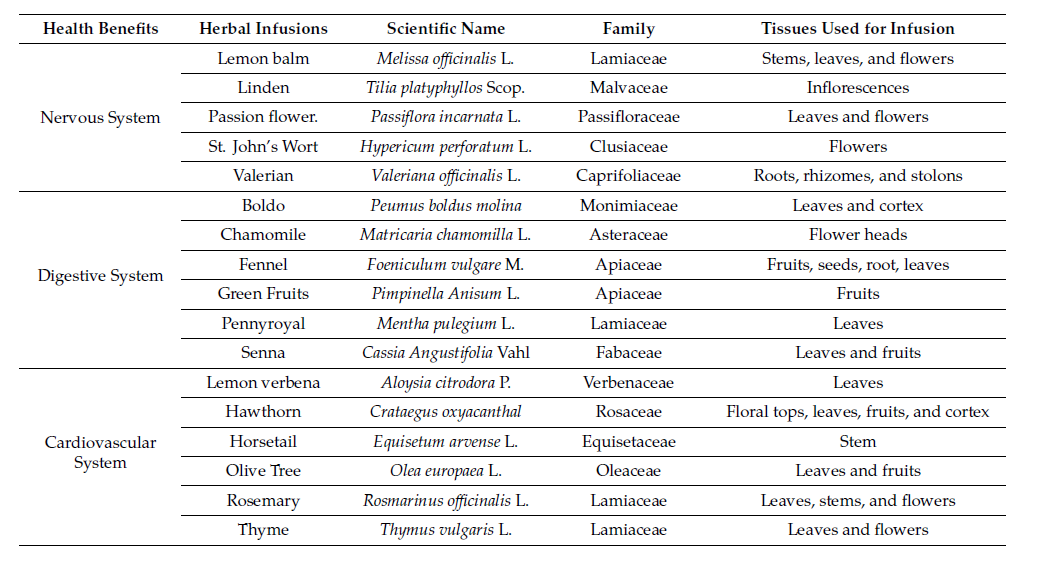 There are several reasons why more and more consumers are drinking tea and infusions. Initially, the consumption of both tea and infusions was due to its taste and aroma and even to be rooted in the country's culture [20]. Nowadays, its consumption goes far beyond that, observing by the consumers an awareness that the chemical components contained in the tea leaves are of great interest, particularly with regard to health[21][22]. Several studies have already shown the close relationship between the consumption of foods rich in antioxidants and the incidence of certain diseases[23]. Catechins (Figure 2) are the major components of green tea leaves[24]. 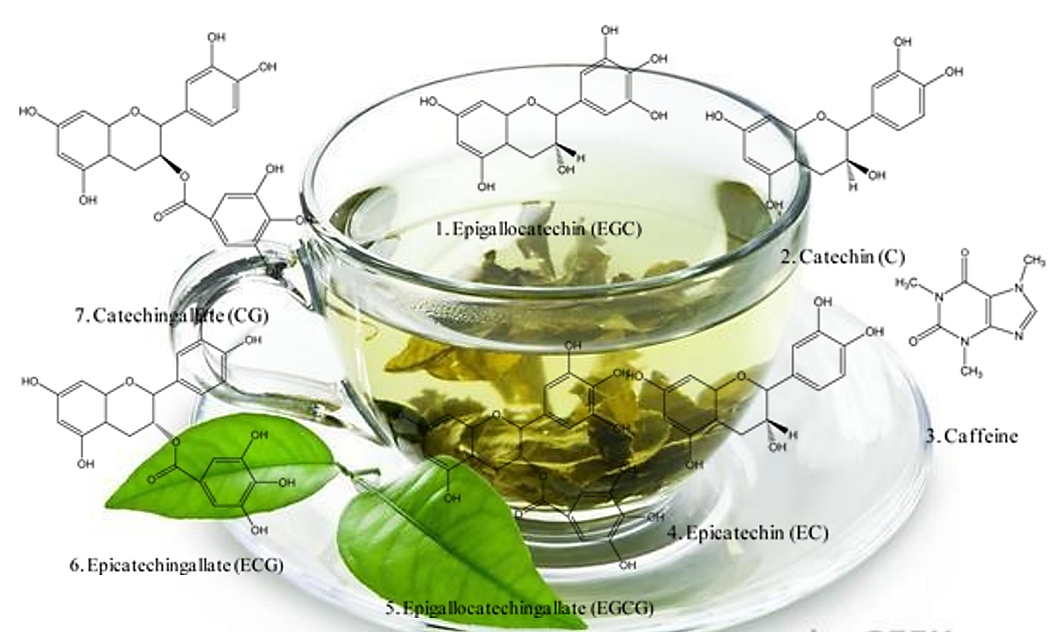 Figure 2. Chemical structures of catechins present in of green tea.

In black tea, catechins are oxidized and dimerized during fermentation to the yellow-orange “pigments,” theaflavins, or polymerized to the red “pigments” called thearubigins. oolong tea contains a mixture of catechins, theaflavins, and thearubigins[24]. So, we can say that polyphenols, mainly the flavonoid: theaflavins, theaflavic acids, and bisflavanols, are considered the main chemical black tea compounds with powerful antioxidant properties (Figure 3) [25]. 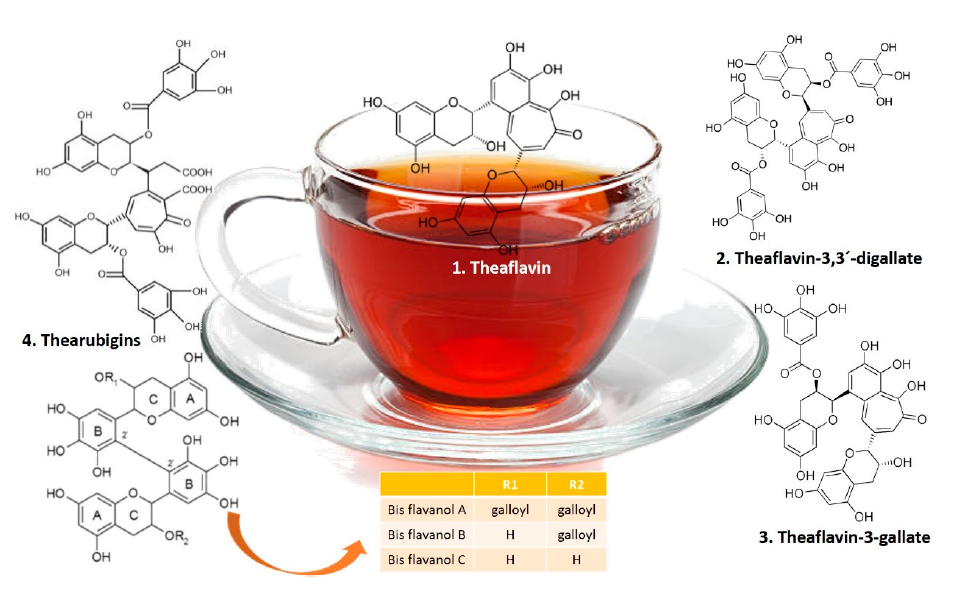 The antioxidant activity of phenolic compounds is mainly due to their redox properties, which allow them to act as the free radical scavengers which remove endogenously generated superoxide, peroxyl and hydroxyl radicals[7]. In addition, they have a metal chelating potential[26]

Being rich in natural antioxidants, are assigned to tea and herbal infusions anticariogenic properties, anti-microbial and anti-cancerous activity[7] These beverages also offer beneficial properties against kidney stones[8], dental caries [29], maintain bone mineral density[30], can be used to treat malaria and high blood pressure [31], cough, stomach pain, fever[32], diarrhea[33] besides acting as tranquilizers [34]. However, Massey [35] reports that tea consumption may increase the formation of calcium oxalate stones and advise those prone to calcium oxalate stone formation to lower levels of consumption.

So, not only tea infusion is an important vehicle for introducing health-promoting compounds into our diet, but also, herbal infusions/tisanes become increasingly popular as part of a well-balanced diet by its medicinal properties.

More
©Text is available under the terms and conditions of the Creative Commons-Attribution ShareAlike (CC BY-SA) license; additional terms may apply. By using this site, you agree to the Terms and Conditions and Privacy Policy.
Upload a video for this entry
Information
Subjects: Others
Contributors MDPI registered users' name will be linked to their SciProfiles pages. To register with us, please refer to https://encyclopedia.pub/register :
Teresa Pinto
,
shereen mohamed
View Times: 1416
Revisions: 3 times (View History)
Update Time: 30 Oct 2020
Table of Contents
1000/1000
Hot Most Recent