Submitted Successfully!
Thank you for your contribution! You can also upload a video entry related to this topic through the link below:
https://encyclopedia.pub/user/video_add?id=25917
Check Note
2000/2000
Skin-Lightening Active Ingredients in Japan
Edit
Upload a video
This entry is adapted from 10.3390/molecules27154774

Japanese pharmaceutical cosmetics are required to have one of the following purposes of use: (1) cleansing, (2) beautifying, (3) increasing attractiveness, (4) changing appearance, and (5) maintaining healthy skin or hair. Whether or not the product has the above purpose of use should be clarified by the efficacy or effectiveness, usage, and dosage of the product. If a product is determined not to meet the specified purpose of use on these bases of its efficacy or effectiveness, usage, and dosage, it is considered a “drug.” Examples of indications include “spots, freckles, pigmentation due to sunburn, etc.” (internal use), “spots, freckles, pigmentation due to sunburn/rash” (internal use), “skin pigmentation, senile pigmentation” (external use), “spots” (internal use), “Riehl melanosis, post-inflammatory hyperpigmentation” (for injection), and “melasma, freckles, post-inflammatory hyperpigmentation” (for internal use and injection). If the product has only the above efficacy or effectiveness, usage, and dosage, it cannot be considered a pharmaceutical cosmetic (quasi-drug).
In Japan, the efficacy for pharmaceutical cosmetics was changed in 2019 from “prevents sun spots and freckles” to “prevents sun spots and freckles by suppressing melanin production.” In 2004, the action of the ingredients in the formulation was changed to “prevents spots and freckles,” and, on the basis of the mechanism of action of the ingredients in the formula, the indication of “suppressing the accumulation of melanin and preventing spots and freckles” was approved. Thus, it is possible to apply for approval of pharmaceutical cosmetics for new efficacy within the scope of quasi-drug efficacy, on the basis of a clear scientific rationale.
The Japanese skincare market can be divided into the following functional categories: moisturizing, skin-lightening, anti-aging, sensitive skin, and pore and acne care. Lightening of the skin accounts for approximately 30% of the market and is the category with the most rapid growth over the past 35 years, particularly in terms of research and development [1]. Approximately twenty active ingredients have been developed for lightening-related quasi-drugs, including chemical substances and plant extracts with excellent inhibitory effects on tyrosinase activity and melanin production. A chronology of the development of skin-lightening active ingredients is presented in Table 1. The chemical structures of skin-lightening active ingredients in Japan are presented in Figure 1. Recent research on anti-aging skin-lightening has revealed new mechanisms and methods for the treatment of skin lightening. This section introduces the history of the skin-lightening ingredients developed in Japan. 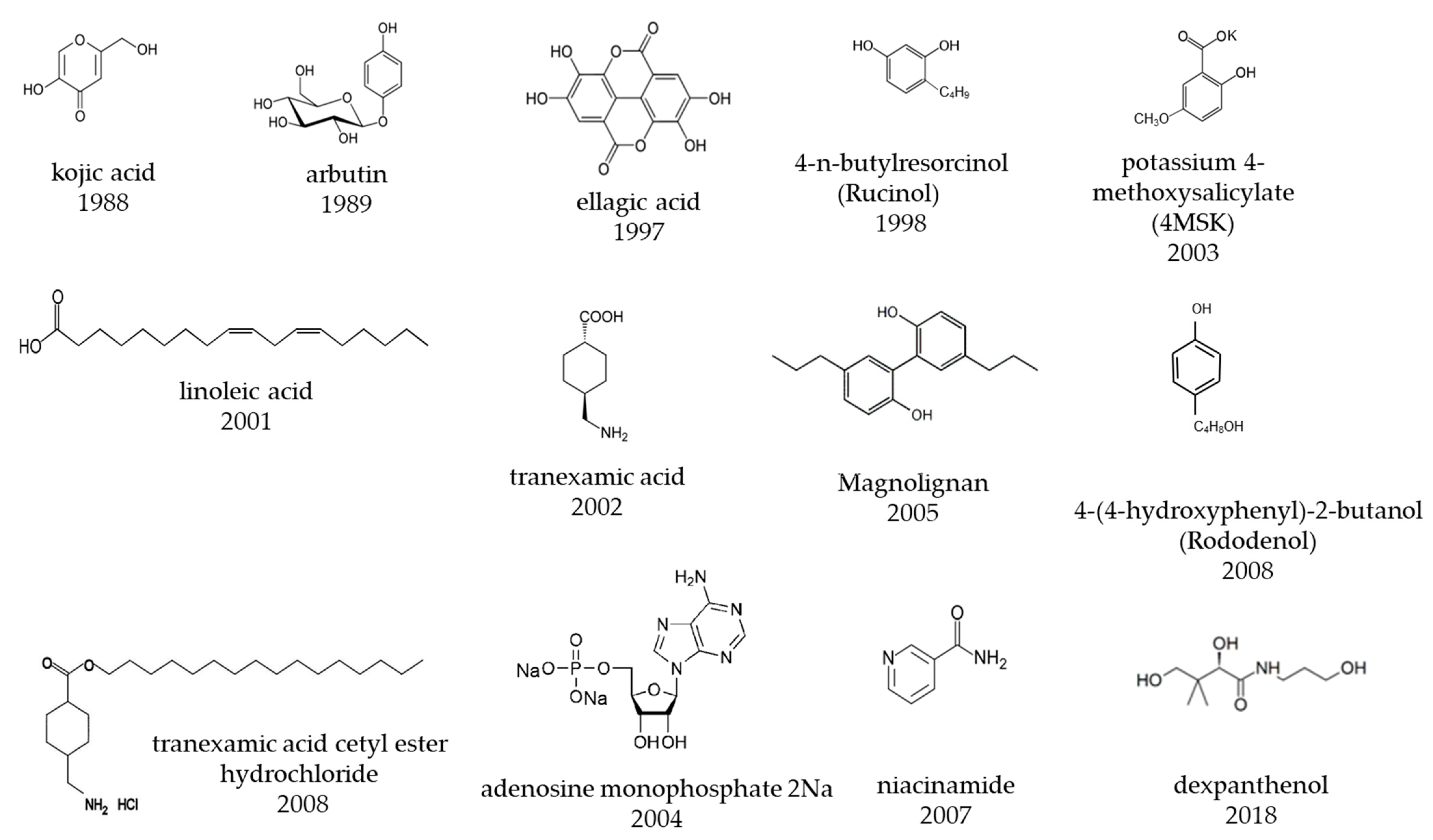 2. Report on the Effectiveness of a Formulation Containing a Lightening Agent and a Spot Remedy for Senile Pigmented Lesions

Most Japanese tests of the effectiveness of pharmaceutical skin-lightening cosmetics have assessed the degree of prevention of skin darkening caused by artificial UVB irradiation. Skin-lightening effects are exclusively evaluated on skin that darkens when exposed to ultraviolet light in humans. There are two types of evaluation methods: the anti-pigmentation test and the accelerated pigmentation disappearance test. The former is a double-blind controlled study in which a test sample is applied before, during, or after the UV irradiation period and the degree of pigmentation formation is compared with a placebo. The latter is a double-blind controlled trial in which the test sample is applied to the pigmented area and the degree of fading of the pigmentation is compared with a placebo. Both are assessed by visual evaluation and instrumental measurement based on superiority or inferiority comparisons or score judgments.
Consumers expect that skin lightening products will “lighten spots and freckles”. Moreover, many consumers expect these products to “eliminate spots and freckles” [11] and want skin-lightening cosmetics to have an effect on spots that have already formed, rather than preventing formation, or promoting the fading, of pigmentation caused by ultraviolet rays. However, problems exist regarding the lightening effects of such cosmetics when actually used on spots and freckles: test results published in scientific journals are lacking, and a possibility exists that these cosmetics might cause skin problems.
Skin-lightening active ingredients can be divided into four categories according to their clinical effectiveness and adverse effects. This research discusses academic research and development regarding skin-lightening ingredients in Japan. The researchers have compiled a table of effectiveness indices for Japanese skin-lightening ingredients, on the basis of the published scientific literature (Table 3).
Category A: Effectiveness of the same concentration of cosmetic formulations on human pigment spots has been described in scientific journals and is highly recommended. Examples include tranexamic acid, arbutin, 3-O-ethyl ascorbic acid, magnesium ascorbyl phosphate (APM), ellagic acid, kojic acid, linoleic acid, 4-n-butylresorcinol, chamomile extract, and adenosine monophosphate.
Category B: Effectiveness of higher concentrations than those used in cosmetics on human pigment spots has been described in scientific journals and is recommended. Examples include oil-soluble licorice extract containing 50% glabridin, niacinamide, placenta extract, retinol, ascorbyl glucoside (AA-2G), and azelaic acid.
Category C: No effectiveness for human pigment spots has been described in scientific journals but may be considered; however, evidence is insufficient. Examples include potassium 4-methoxysalicylic acid and dexpanthenol.
Category D: Not recommended, because of toxicity data described in scientific journals. Examples include Rhododenol, Magnolignan, and ascorbyl tetra-2-hexyldecanoate.
Table 3. Effectiveness indices of lightening ingredients developed in Japan.
The use of a hydrophilic ointment containing 3% APM for hyperpigmentation (melasma and Riehl melanosis) was reported in 1969 [15]. It was reported in 1996 that APM 10% cream was found to be significantly beneficial in 19 of 34 patients with melasma and senile freckles and in 3 of 25 patients with normal skin [7]. The use of 3% human placenta extract for treating facial hyperpigmentation in women (47 cases of melasma and 2 cases of freckles) was reported in 1982 [25]. Other topically applied products with good results for melasma include 1% or 2.5% kojic acid [16], 3% arbutin [13], 1% tranexamic acid [12], 0.1% linoleic acid S [18], 0.3% Rucinol [19], and 0.5% ellagic acid [9]. Examples of topically applied products with good results for senile pigmentation include 3% APM [15], 10% APM [7][33], 1% or 2.5% kojic acid [16][17][34], 0.5% ellagic acid [9], 7% arbutin [8], and 0.5% chamomile extract [20]. Topical application of 1% or 2.5% kojic acid [16], 0.5% ellagic acid [9], 1% tranexamic acid [12], and 7% arbutin [8] has been used with good results in the treatment of freckles. In some cases, 1% vitamin C ethyl has shown effectiveness in pigmentation after natural light exposure and burns [14]. The effectiveness of these pharmaceutical skin-lightening cosmetics was not evaluated in a comparative study with a placebo, but instead was assessed in a study that examined the effectiveness of the formulations before and after continuous use, without double-blinding. In examining effectiveness, attention must be paid to changes in skin tone with seasonal variations and the effects of the base agent.
Examples of topical effectiveness in double-blind comparative studies include 0.1% retinoic acid (Tretinoin) [3], 0.2% oil-soluble licorice extract [22], and 20% azelaic acid [28] for melasma. Topical 0.1% retinol has been reported to be effective in photodamaged skin in a double-blind, controlled study [26]. Iontophoresis of 20% AA-2G has been reported to be effective in melasma and postinflammatory hyperpigmentation [27]. For senile pigmentation, both 0.1% retinoic acid (tretinoin) [4] and 2% 4-methoxyphenol/0.01% retinoic acid [5][6] have shown topical effectiveness in double-blind comparative studies, but these are not active ingredients in pharmaceutical cosmetics. Thus, a pharmaceutical skin-lightening cosmetic product is defined as a pharmaceutical product if its effectiveness against melasma and senile pigmentation is statistically demonstrated in actual use in a double-blind comparison test.

More
© Text is available under the terms and conditions of the Creative Commons Attribution (CC BY) license; additional terms may apply. By using this site, you agree to the Terms and Conditions and Privacy Policy.
Upload a video for this entry
Information
Subjects: Dermatology
Contributor MDPI registered users' name will be linked to their SciProfiles pages. To register with us, please refer to https://encyclopedia.pub/register :
Kazuhisa Maeda
View Times: 43
Entry Collection: Biopharmaceuticals Technology
Revisions: 2 times (View History)
Update Time: 08 Aug 2022
Table of Contents
1000/1000
Hot Most Recent