Submitted Successfully!
Thank you for your contribution! You can also upload a video entry related to this topic through the link below:
https://encyclopedia.pub/user/video_add?id=25645
Check Note
2000/2000
Poly(N-isopropylacrylamide)-Based Hydrogels
Edit
Upload a video
This entry is adapted from 10.3390/gels8070454

Poly(N-isopropylacrylamide) (PNIPAM) is a widely utilized negative thermosensitive polymer (as it has increased solubility with lowering of temperature, causing volume phase transition by forming hydrogen bonds) that has currently sparkled a lot of scientific inquisitiveness. Smart hydrogels based on PNIPAM demonstrate distinct thermoresponsive features close to a lower critical solution temperature (LCST) that enhance their capability in various biomedical applications such as drug delivery, tissue engineering, and wound dressings.

Poly(N-isopropylacrylamide) (PNIPAM) is a widely utilized negative thermosensitive polymer (as it has increased solubility with lowering of temperature, causing volume phase transition by forming hydrogen bonds) that has currently sparkled a lot of scientific inquisitiveness [1][2]. In the aqueous medium, PNIPAM assembles a stretched spiral elastic shape; polymer molecules form hydrogen bonds with each other due to hydrogen bonding with molecules of water. It has both hydrophobic isopropyl (–CH(CH3)2) side groups and hydrophilic amide (–CONH–) groups in the structure. PNIPAM has an LCST of 32 °C, which is somewhat lower than human body temperature of 37 °C, and it can be modified by copolymerizing with some distinct hydrophobic or hydrophilic polymers to develop thermo-sensitive, in situ hydrogels. [3][4][5]. The temperature-responsive behaviors are primarily due to connections between these groups and solvent molecules. As a result, PNIPAM converts from solution to gel state as the LCST reaches human body temperature [6][7][8][9][10]. Additional hydrophilic monomers increase the polymer’s hydrophilicity and lead to more significant interactions with water, resulting in a higher LCST, whereas copolymerization with more hydrophobic monomers reduces LCST [11]. This property makes PNIPAM suitable for biomedical applications, e.g., controlled wound dressings, tissue engineering scaffolds, and drug delivery systems [12][13]. Notwithstanding these appealing benefits, PNIPAM-based hydrogels nevertheless have certain drawbacks, including limited biodegradability [14], weak mechanical strength [15], insufficient drug loading capacity [16], and immediate release [15][17][18], etc.; limiting the feasibility in drug delivery.
Several drugs can be efficiently encapsulated into the hydrophilic polymers by using a lower temperature to dissolve the drug in the solvent to ensure efficient delivery, raising the temperature slightly above the LCST for hydrogel appearance. Furthermore, maintaining precise temperature control permits site-specific drug delivery and delayed release. The PNIPAM solution can be rapidly applied to the skin and activated by utilizing body temperature to create a 3D hydrogel that can help restore tissues by encouraging cell proliferation and differentiation while preserving the homeostatic activity of cells. The temperature-dependent modulation of gel coating and reversible sol-to-gel can be utilized to develop adherence to the skin and its dissociation for wound treatment. Other features of PNIPAM, in conjunction with thermosensitivity, include adjustable geometries and nontoxicity, both of which are advantageous for biological applications [19]. Wound dressings play a crucial part in lesion care, and their effectiveness impacts how quickly a wound heals [20]. That a warm, moist environment promotes faster healing has been widely demonstrated in several empirical investigations in both in vivo and in vitro wound healing [21][22]. Various medical studies also recommend that dressings should be translucent to allow easy observation, and that they have the ability to retain fluids [23][24][25]. Aside from the properties described above, zwitterionic hydrogels have lately gained popularity as nonadherent wound dressings due to their high resistance to cell attachment, protein adsorption, and microbial adherence [26][27]. For wound dressing, PNIPAM can be utilized to retain the skin adhesion and differentiation of gel coatings. Its thermosensitivity is complemented by LCST adjustability, low toxicity, and [24] variable structure. [28], making it suitable for biomedical applications [19].
Many contemporary tissue engineering techniques rely on the use of a material scaffold. These scaffolds act as an artificial extracellular matrix (ECM), allowing cells to be organized into a three-dimensional framework and stimulating the growth and creation of desirable tissue [29]. The scaffold material and qualities required vary greatly depending on the tissue of concern and the individual application [30]. Thermoresponsive polymers are extensively employed in tissue engineering in two ways: platforms for cell proliferation and injectable solutions for in situ scaffolding [31].
The primary disadvantage of PNIPAM-based hydrogels in drug delivery is the incorporation of hydrophobic drugs in the water-loving polymeric core [32], since mostly hydrophobic drugs are typically and effectively used in disease treatment. Along with this, the tensile strength [15] of these hydrogels is weak, which may sometimes lead to early drug release before arrival at the specific site [33]. Several researchers are working painstakingly to improve the mechanical characteristics of PNIPAM hydrogels to fix the reported shortcomings. Hybridization of PNIPAM-based composite hydrogels with appropriate materials such as inorganic/metal nanoparticles [34], organic self-assemblies [16], and several other polymeric material incorporations/composite formations are some reported viable techniques for achieving this goal [35][36]. A novel polymeric block could regulate the thermal sensitivity of the resulting hydrogel by adjusting the hydrophilic/hydrophobic equilibrium of PNIPAM. Alternatively, a novel polymeric component can affect the hydrogel network’s chemical rigidity and morphology, modulating the copolymeric hydrogel’s mechanical properties [37][38][39]. The successful composite formation of PNIPAM with various materials, e.g., hyaluronic acid (HA) [40][41], zinc oxide (ZnO) nanoparticles [42], silver nanoparticles [43], hydroxyapatite (HAp) nanoparticles [44], carbon nanoparticles [45], etc.; for tissue engineering and wound healing has been reported in several investigations [46][47][48]. Adequate biocompatibility, higher tensile strength, customizable temperature responsiveness, multi-drug loading capability, targeted drug delivery, and controlled drug delivery are among the unique and/or improved features of composite hydrogels [19]. The inclusion of some other polymer inside the hydrogel matrix to make interpenetrating polymeric network system (IPN) hydrogels for biomedical application [49] is another useful way to alter the functionalities of a hydrogel. The polymeric networks in IPN hydrogels can efficiently adjust mechanical characteristics, swelling/deswelling behavior, and drug loading/release pattern [50].

The polyacrylamide structure is mostly crafted with a hydrophilic amide group (almost 90%) and -C-C- hydrophobic portion. However, poly(N-isopropyl-acrylamide) and other N-substituted acrylamide polymers (PNIPAM) have balanced hydrophilic and hydrophobic regions below LCST. The gel-polymer/water system’s total energy is lowered due to hydrophobic polymers enveloped by water molecules below LCST [89]. The solvation and transition capacity of PNIPAM in cold water increases when the temperature is raised off its LCST (LCST ≈ 32–34 °C), leading to the “coil to globule” of the polymeric chain’s (CG) transition. The CG transition is in charge of phase inversion into rich layers. Polymeric/water phases further exhibit volume phase transition (VPT) [90]. A loss in entropy of water molecules enveloping the hydrophilic polymeric chain is counterbalanced by an increase in enthalpy owing to hydrogen bonding between the hydroxyl groups surrounding the polymeric chain’s hydrophobic sections. Hydrophobic hydration is a process that allows a hydrophobic polymer to stay hydrated in an aqueous environment. If the temperature is increased above LCST, water molecules leave the polymer chain and form a globule structure. As a result, the PNIPAM–polymer is hydrated, and a definite volume phase transition is observed. The phase separation initially occurs due to PNIPAM molecule incorporation into larger aggregates [91][92] via several mechanisms and factors, e.g., dewetting caused by solvent fluctuations, cooperative hydration [93][94][95], the aqueous medium’s energy state [96], endothermic heat [97], precipitation polymerization [98], etc. The hydrogen bond between water molecules and PNIPAM is weaker due to the temperature rising above LCST, leading to the formation of an unstable solution. Further, the transitions of the PNIPAM–polymer can be confirmed by FTIR spectroscopy; the hydrodynamic diameter of PNIPAM gel affects the volume phase transition, causing dehydration of the polymeric gel [90].
The dependency of LCST on molecular weight and concentration of PNIPAM polymer in H2O and D2O can be confirmed via dielectric relaxation spectroscopy with small- and wide-angle x-ray scattering (SWAXS) (DRS) to show phase transition. Several investigations have reported a strong effect of interpenetration between the diverse chains of PNIPAM at high concentration decreasing correlation length (ξ). The molecular weight of PNIPAM is entirely independent of ξ at higher concentrations due to PNIPAM chains’ crammed state [92]. Interface formation and interchange aggregation are reported to be higher as a result of lowering the molecular weight of the polymer [92]. Several investigations have studied the phase transition effect due to LCST and confirmed peculiar behavior prevails with hydration [94][99][100][101]. The phase transition of the PNIPAM network can also be modulated by precipitation polymerization at 37−45 °C (near the LCST). Several analytical studies, e.g., atomic force microscopy (AFM) with photon correlation spectroscopy (PCS), etc.; have reported narrow, dispersed, spherical microgel and hydrogel volume phase transition behaviors [102][103]. Moreover, the phase transition property of PNIPAM-based hydrogel systems is advantageous due to its high mechanical strength and encapsulation capability, which has gained more attention in biomedical and tissue engineering applications [104]. 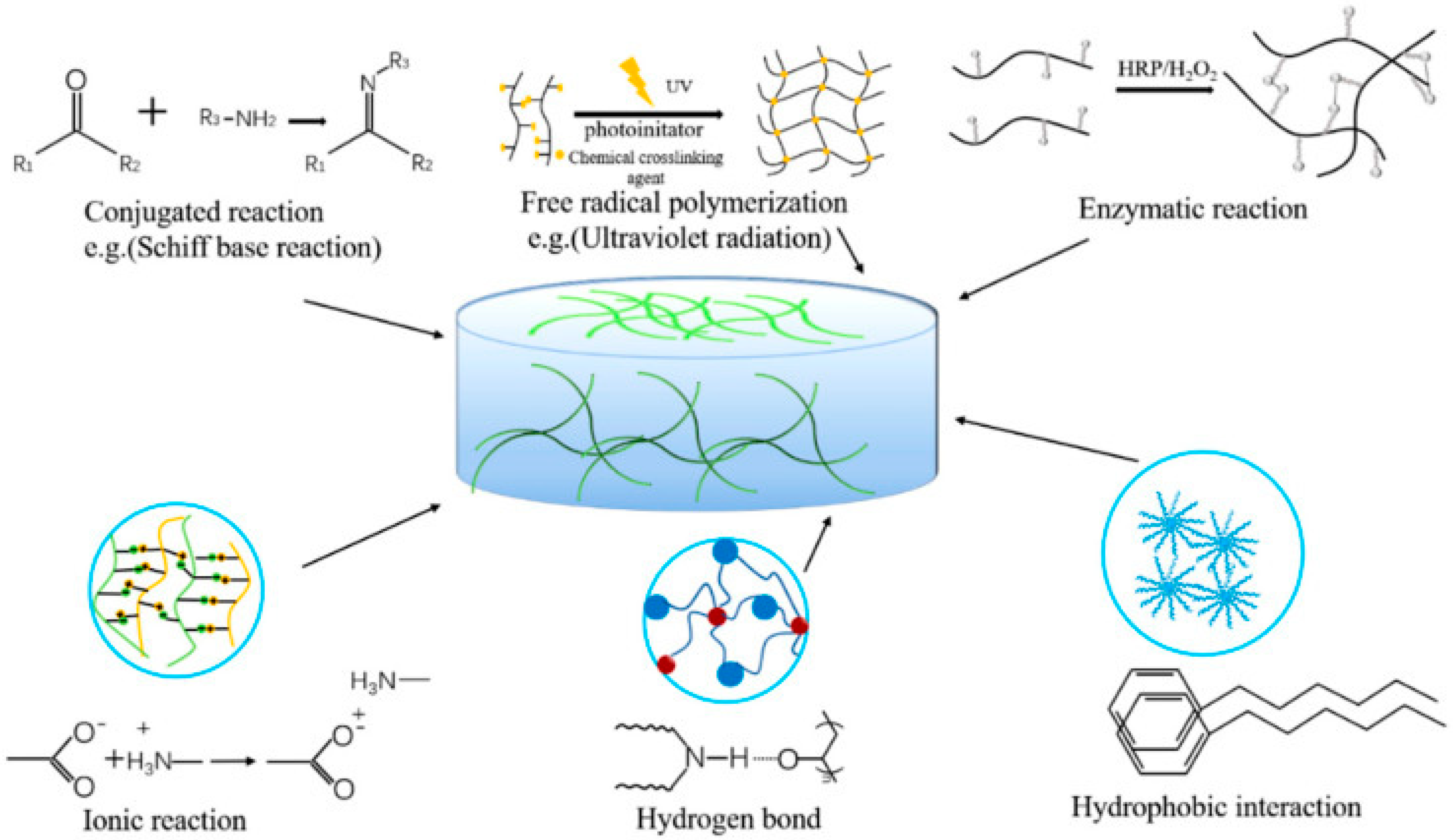