+1 point
Thank you for your contribution! You can also upload a video entry related to this topic through the link below: https://encyclopedia.pub/user/video_add?id=25420
Check Note
2000/2000
Biological Effects of Squalamine and Its Aminosterol Derivatives

Squalamine is a natural aminosterol that has been discovered in the tissues of the dogfish shark (Squalus acanthias). Studies have previously demonstrated that this promoter compound and its derivatives exhibit potent bactericidal activity against Gram-negative, Gram-positive bacteria, and multidrug-resistant bacteria. The antibacterial activity of squalamine was found to correlate with that of other antibiotics, such as colistin and polymyxins. Still, in the field of microbiology, evidence has shown that squalamine and its derivatives have antifungal activity, antiprotozoa effect against a limited list of protozoa, and could exhibit antiviral activity against both RNA- and DNA-enveloped viruses. Furthermore, squalamine and its derivatives have been identified as being antiangiogenic compounds in the case of several types of cancers and induce a potential positive effect in the case of other diseases such as experimental retinopathy and Parkinson’s disease.

Squalamine is an aminosterol extracted from the stomach of the shark Squalus acanthias. It was discovered in 1993 by Moore et al., after studying the innate immune system of different animals [1]. The primary interest of this molecule is its great antimicrobial activity against Gram-positive and Gram-negative bacteria and its antifungal action (Figure 1 and Figure 2) [2][3][4]. In addition to being a very promising compound as an antimicrobial, squalamine has also been discovered as a strong anticancer and antiviral compound and could be a more nature-friendly option in its chemical and biological use, as it is a natural resource (Figure 3) [5][6]. Squalamine has been shown to have comparable effect of certain antibiotics, such as colistin and polymyxin B, and to also be effective against bacteria developing multidrug resistance (MDR) [7]. 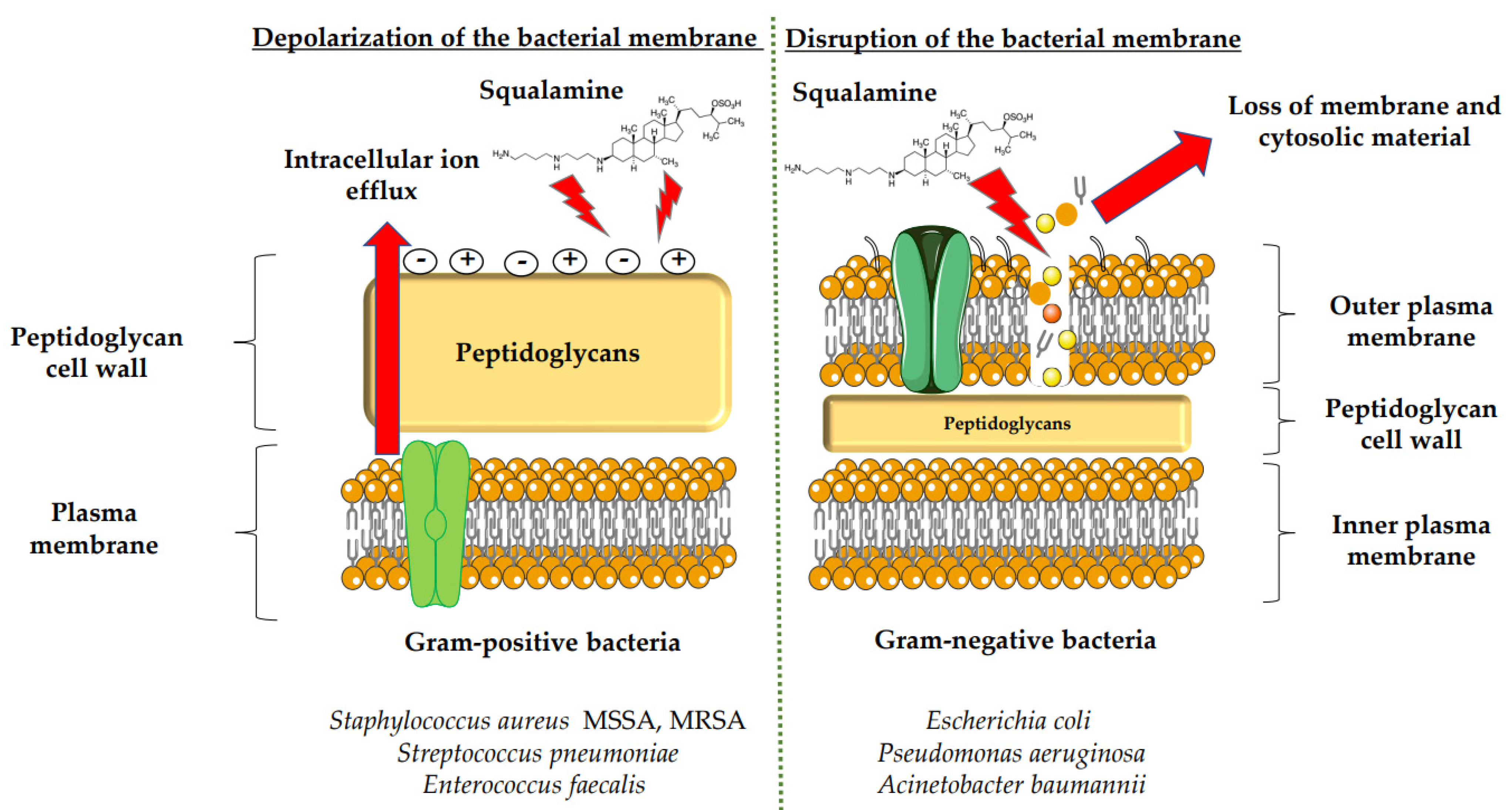 Figure 1. Mechanisms of action of squalamine in Gram-positive and Gram-negative bacteria. 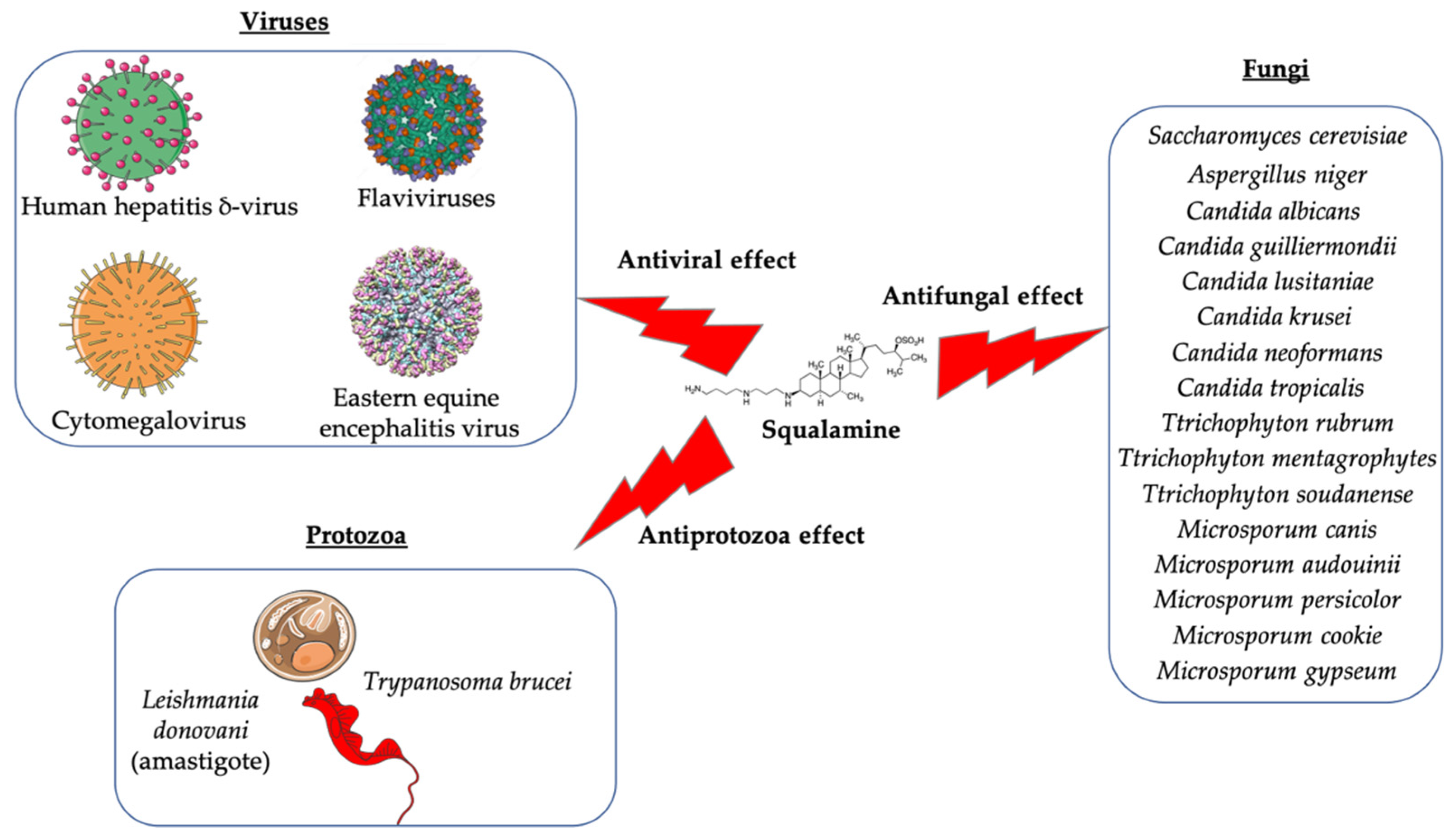 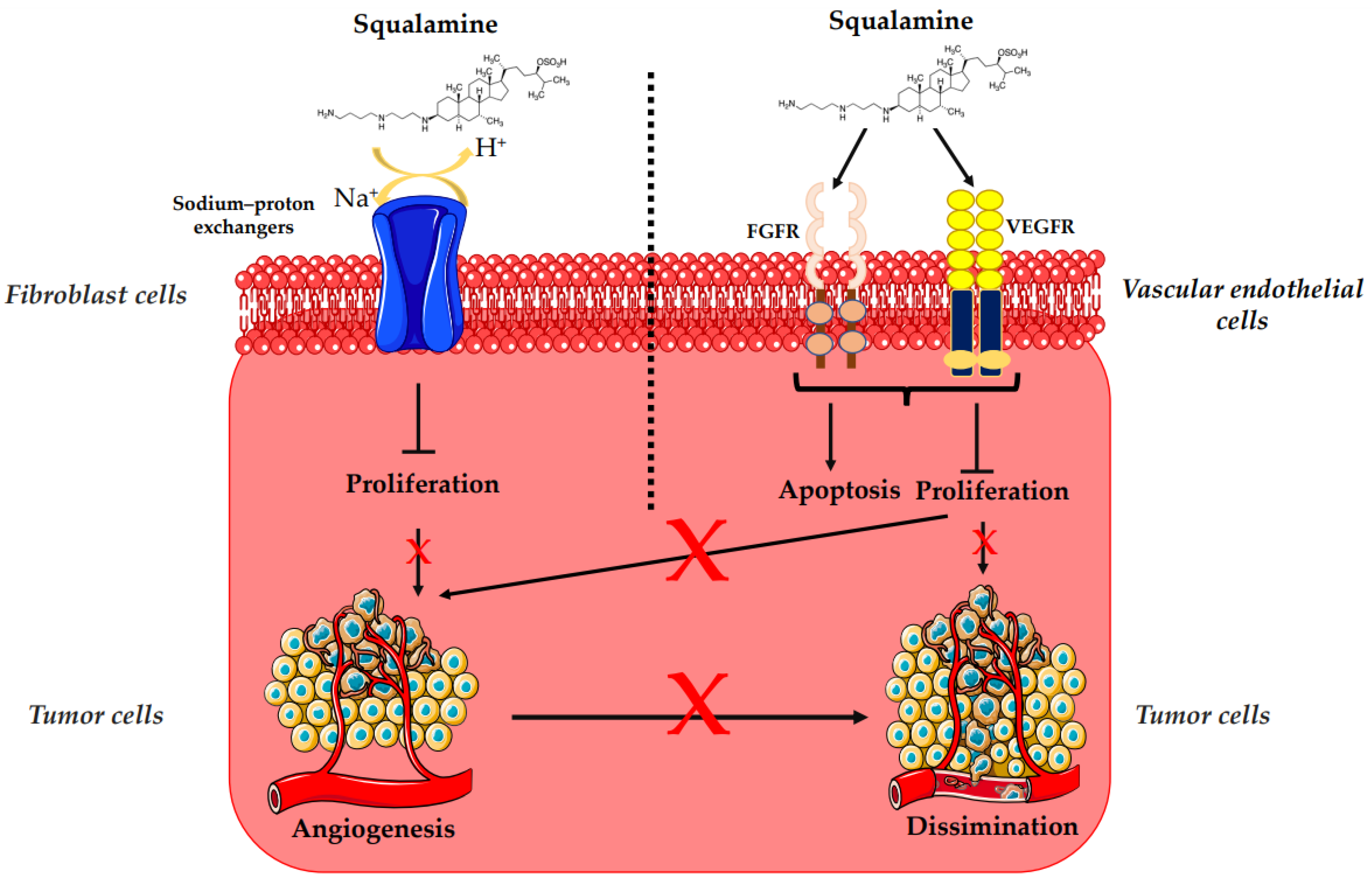 2. Structure of Squalamine and Its Derivatives

3. Aminosterols and Their Mode of Action

3.1. Antimicrobial Activity of Squalamine and Its Derivatives

Squalamine displays remarkable efficacy against Gram-negative and Gram-positive bacteria. An analysis of squalamine’s antibacterial efficiency at 250 mg/L was studied against the reference bacterial strains Escherichia coli (E. coli) (American Type Culture Collection (ATCC) 25922), Pseudomonas aeruginosa (P. aeruginosa) (ATCC 27853), Staphylococcus aureus (S. aureus) (ATCC 25923), and a clinical isolate Streptococcus pneumoniae (S. pneumoniae) (recovered from the sputum of a cystic fibrosis patient), and compared to colistin [3]. Squalamine exhibited complete killing of P. aeruginosa and E. coli reference strains in 2 h by disrupting membranes, whereas colistin required 4 h. Both compounds react by creating active lesions in the bacterial membrane, leading to emptied bacterial cells. Remarkably, squalamine showed a direct bactericidal effect against the S. aureus reference strain, resulting in a dramatic disruption of the bacterial membrane, with drained cytoplasmic content. Then, the effects of squalamine on bacterial membrane integrity were investigated by measuring intracellular Adenosine triphosphate (ATP) release kinetics for 20 min. It was described that squalamine induced a rapid ATP release from S. aureus and S. pneumoniae that reached 100% of maximal efflux, and depolarization of bacterial membranes was observed [3]. These results indicate that squalamine acts by disrupting the outer membranes of Gram-negative bacteria by a detergent-like mechanism of action and by depolarizing the bacterial membranes of Gram-positive bacteria (Figure 1) [3]. These squalamine mechanisms of action are preserved even in MDR clinical isolates. MDR bacteria have an ability to overexpress different mechanisms of action of resistance. It that includes drug efflux pumps production, membrane permeability alteration, and enzymatic barrier activation. All these mechanisms of action are well-known to induce a high level of resistance towards quinolones, ß-lactams, and phenicols [7][10][12].
The antibacterial activity of squalamine and synthesized aminosterol derivatives (ASD 1 [7-(1,4-diaminobutane)-cholest-5-ene-3β-ol] and ASD 2 [7β-(1,4-diaminobutane)-cholestan-3β-ol) (Table 1) was investigated for the first time against a large range of MDR bacteria involved in clinical pathologies like cystic fibrosis (CF). Interestingly, antibacterial experimentations revealed minimal inhibitory concentrations (MICs) for E. coli (ATCC 25922) of 2 mg/L for squalamine and 4 mg/L for both ASD 1 and ASD 2. MICs were 8 mg/L for squalamine, 4 mg/L and 8 mg/L for ASD 1 and ASD 2, respectively, for P. aeruginosa (ATCC 27853) strain. MICs were 2 mg/L for squalamine, 2 mg/L and 4 mg/L for ASD 1 and ASD 2, respectively, for S. aureus (ATCC 25923) strain. ASDs were also active against S. pneumoniae isolates with a MIC of 32 mg/L, and against others Gram-positive isolates, with MICs ranging from 0.5 to 8 mg/L. Some studies have suggested that there is a similarity of certain mechanisms of action of ASDs and polymyxins, which suggests that the antibacterial activity of ASDs against Gram-positive bacteria is reduced (Figure 1) [13].
The studies of the antimicrobial effects of squalamine have been extended from the experimental phase to the preclinical and clinical phase. Squalamine has been tested as a therapeutic agent to fight against the colonization of the skin by S. aureus. Cutaneous colonization was studied in a mouse model infected by methicillin-susceptible S. aureus (ATCC 25923) and methicillin-resistant S. aureus (MRSA) (Collection de Souches de l’Unité des Rickettsies (CSUR) P102) at 106–108 colony-forming unit/mL (cfu/mL), separately. Squalamine revealed a high degree of viable S. aureus load reduction with bactericidal effect up to 4-log10, during a 2-day experiment. A single dose of squalamine formulated at 1% in a petrolatum-based cream completely eradicated S. aureus (Table 1) [18].
Antidermatophyte effect of squalamine and of a synthetic aminosterol derivative was also investigated and showed significant in vitro activity against Trichophyton rubrum (T. rubrum), Trichophyton mentagrophytes (T. mentagrophyte), Trichophyton soudanense (T. soudanense), Microsporum canis (M. canis), Microsporum audouinii (M. audouinii), Microsporum persicolor (M. persicolor), Microsporum cookie (M. cookie), and Microsporum gypseum (M. gypseum), with MICs ranging from 4–16 mg/L for squalamine, and from 2–8 mg/L for the synthetic aminosterol derivative (Table 1) (Figure 2) [19]. These findings supported further clinical studies of aminosterols activity against dermatophyte infections, introduced by a double-blinded randomized placebo-controlled clinical trial focused on squalamine effect on tinea capitis. This pathology represents a common fungal infection of the scalp, hair follicles, and hair shafts [50]. Clinical trial phase II study shows a statistically significant higher hairgrowth score within the tinea capitis lesions treated with 1% squalamine ointment. In addition, squalamine showed a favorable safety profile when administered topically, as no clinical or biological adverse events were recorded in treated patients. In this clinical trial, squalamine ointment application was well tolerated and showed an encouraging partial clinical activity for the treatment of tinea (Table 1) [51].

3.2. Antiangiogenesis and Antitumor Activity of Squalamine and Its Derivatives

The overexpression of HER-2/neu proto-oncogene is one of the risk factors for the occurrence of breast cancer, which is a major cause of mortality among women worldwide [41]. HER-2 receptor-mediated signaling is also known to enhance secretion of vascular endothelial growth factor (VEGF), eliciting increased tumor-associated angiogenesis, which is critical for tumor growth and progression (Figure 3) [42]. Regarding treatment, randomized clinical trials based on bevacizumab (a recombinant humanized monoclonal antibody directed against the vascular endothelial growth factor) and trastuzumab (a monoclonal anti-human epidermal growth factor receptor 2 protein antibody) have not demonstrated any additional overall survival benefit [43][44][45][47][48][52]. In that context, squalamine has been used as an alternative antiangiogenic treatment [43][44][45]. Thus, the effects of squalamine on angiogenesis, mitogen-induced proliferation and vascularization, have been studied on a chicken embryo. It was observed that squalamine reduces the vascularization of the tumor; it decreases the levels of the fibroblast growth factor (FGF) and the levels of VEGF. Furthermore, squalamine leads to a decrease in gliomas (brain tumors), cysts (formation of abnormal epithelium), and hemangioblastomas (tumors of vascular origin often in the central nervous system) (Table 1) (Figure 3) [21].
The biological mechanism of the antiangiogenic and antitumor effects of squalamine was also evaluated in vitro with MCF-7 (Michigan Cancer Foundation-7) human breast cancer cell line and in vivo with HER-2 breast tumor xenografts, where squalamine treatment (at 2 mg/kg daily) reduced the growth of tumors as compared to controls (Table 1). Thus, to determine the effect of squalamine on the activation of VEGF, human umbilical vein endothelial cells (HUVECs) were grown in vitro in the presence of 50 ng/mL of VEGF, 3.2 μM of squalamine and combinations of VEGF, and different concentrations of squalamine. Significant inhibition of VEGF-induced vascular endothelial cell proliferation by squalamine was revealed. This growth-suppressive effect of squalamine was dose-dependent, with maximal suppression at 3.2 μM. Thus, the antiangiogenic activity of squalamine appears to be mediated by a direct effect on vascular endothelial cells (Figure 3) [11].

3.3. Potential Effects of Squalamine on Neurodegenerative Diseases and Other Pathologies

In animal models and in the context of intestinal pathologies related to neurodegenerative diseases, squalamine and its derivative trodusquemine could have a promotive effect on neurodegenerative disease, especially in cases of Parkinson’s and Alzheimer diseases [46]. Squalamine has been explored as a potential agent which has an effect on the gastrointestinal tract, particularly in cases with Parkinson’s disease [29].

Given that the antiangiogenic effect of squalamine in tumors has already been demonstrated in various studies, there has been a growing interest in evaluating the effect of this aminosterol in the case of retinopathies [31][32][53][54]. Indeed, mice with oxygen-induced retinopathy treated subcutaneously with squalamine at 25 mg/kg for 5 days showed improvement in their retinopathy, characterized by a decrease in the number of neovascular nuclei extending beyond the internal limiting membrane on retinal sections. Additionally, in a rat model, systemically administered squalamine lactate partially reduced the development of the choroidal neovascular membrane induced by laser trauma in this animal model (Table 1) [30]. In an experimental model of iris neovascularization in cynomolgus monkeys, treated with squalamine 1 mg/kg administered by systemic injection, the aminosterol induced regression of iris neovascularization in all experiments and led to complete regression of iris rubeosis for some of the animals. While the controls presented an intense and persistent neovascularization of the iris, systemic squalamine injection inhibited the development of iris neovascularization and caused partial regression of new vessels in a primate model (Table 1) [31]. These encouraging results show that squalamine could be a novel agent for an effective treatment of ocular neovascularization and used as a therapeutic agent for macular degeneration or for retinopathies [31][32][53][54].

More
© Text is available under the terms and conditions of the Creative Commons Attribution (CC BY) license; additional terms may apply. By using this site, you agree to the Terms and Conditions and Privacy Policy.
Upload a video for this entry
Information
Subjects: Microbiology
Contributors MDPI registered users' name will be linked to their SciProfiles pages. To register with us, please refer to https://encyclopedia.pub/register :
Nour Mammari
,
Elsa Salles
,
Audrey Beaussart
,
Sofiane El-Kirat-Chatel
,
Mihayl Varbanov
View Times: 149
Revisions: 3 times (View History)
Update Date: 30 Jul 2022
Table of Contents
1000/1000
Hot Most Recent