+1 point
Thank you for your contribution! You can also upload a video entry related to this topic through the link below: https://encyclopedia.pub/user/video_add?id=25399
Check Note
2000/2000
Epidemiology of Elizabethkingia spp. Infections in Southeast Asia

Elizabethkingia spp. is a ubiquitous pathogenic bacterium that has been identified as the causal agent for a variety of conditions such as meningitis, pneumonia, necrotizing fasciitis, endophthalmitis, and sepsis and is emerging as a global threat including in Southeast Asia. Elizabethkingia infections tend to be associated with high mortality rates (18.2–41%) and are mostly observed in neonates and immunocompromised patients. Difficulties in precisely identifying Elizabethkingia at the species level by traditional methods have hampered the understanding of this genus in human infections. In Southeast Asian countries, hospital outbreaks have usually been ascribed to E. meningoseptica, whereas in Singapore, E. anophelis was reported as the main Elizabethkingia spp. associated with hospital settings. Misidentification of Elizabethkingia spp. could, however, underestimate the number of cases attributed to the bacterium, as precise identification requires tools such as MALDI-TOF MS, and particularly whole-genome sequencing, which are not available in most hospital laboratories. Elizabethkingia spp. has an unusual antibiotic resistance pattern for a Gram-negative bacterium with a limited number of horizontal gene transfers, which suggests an intrinsic origin for its multidrug resistance.

The Gram-negative bacteria of the genus Elizabethkingia have recently emerged as an important pathogen in hospital-acquired infections and are generally associated with high mortality [1]. Recent literature has reported several cases of severe infection in humans owing to this organism, with neonatal meningitis most commonly presented in children [2], accompanied by a range of other clinical manifestations such as septicemia and bacteremia [3][4], osteomyelitis [5], urinary tract infections [6][7], endogenous endophthalmitis [8], endocarditis [9], epididymo-orchitis [10], pulmonary abscess [11], necrotizing fasciitis [12][13], cystic fibrosis [14], hydrocephalus [15], and secondary infections with a high mortality rate, particularly in immunocompromised patients [16]. Elizabethkingia meningoseptica infections have also been associated with COVID-19 patients [17]. Elizabethkingia spp. infects not only immunocompromised patients but also immunocompetent ones [18][19][20].
Historically, the first report of human infection due to Elizabethkingia was that of 19 cases of meningitis in infants in the United States of America [21]. Even in its earliest description, the isolates were demonstrated to be multidrug-resistant. Not long after King’s (1959) report, an outbreak of meningitis infection with E. meningoseptica was reported among neonates in the Congo [22] with varying sensitivities to chloramphenicol, carbomycin, magnamycin, and erythromycin.
Worldwide infections caused by E. meningoseptica were reportedly high amongst immunocompetent neonates as well as hospitalized patients with existing underlying infections, and in a comprehensive review, Dzuiban et al. [2] showed that from 283 cases reported from 28 countries from 1944 to 2017, 76% of them were neonates aged 0–1 month. From the 283 cases that were reviewed, 209 of the patients were diagnosed with meningitis [2]. Infections by this pathogen have been reported in many parts of the world, including in Southeast Asian countries such as Malaysia [2], Singapore [23], Thailand [24], Indonesia [25], and Cambodia [26]. However, until now, there have been no published reports from other Southeast Asian countries such as the Philippines, Brunei, Myanmar, Laos, and Timor-Leste.

Elizabethkingia are intrinsically resistant to most β-lactams, β-lactam/lactamase inhibitors, and carbapenems due to the presence of two unique class B metallo-β-lactamases (MBLs), namely blaBlaB and blaGOB, along with a class A extended-spectrum β-lactamase (ESBL), blaCME [37][38][39]. Elizabethkingia are the only known bacteria thus far with multiple chromosomally encoded MBLs [40]. Reports of subclasses of MBL genes such as blaBlaB-1 [38], blaBlaB, and blaGOB in both E. meningoseptica and E. anophelis [39], as well as blaBlaB-16 and blaGOB-19 in E. miricola isolated from a black-spotted frog in China [41], make Elizabethkingia spp. a possible environmental reservoir for β-lactam resistance.
Elizabethkingia isolates are frequently resistant to aminoglycosides, macrolides, tetracycline, and vancomycin but show variable susceptibility to piperacillin, piperacillin-tazobactam, fluoroquinolones, minocycline, tigecycline, and trimethoprim-sulfamethoxazole [3][36][39][42][43][44]; cephalosporins, monobactams, and moderate susceptibilities to piperacillin [45][46][47], ceftazidime, colistin, and meropenem [48]; and levofloxacin [49]. There are currently no established MIC breakpoints for Elizabethkingia, and susceptibilities are largely reported based on Enterobacteriaceae breakpoints of the Clinical and Laboratory Standards Institute (CLSI) M100 guidelines and/or the European Committee on Antimicrobial Susceptibility Testing (EUCAST) pharmacokinetic–pharmacodynamic (PK–PD) “non-species” breakpoints [35][36]. It has been pointed out that susceptibilities, especially for vancomycin and piperacillin-tazobactam as determined by disk diffusion and E-test, are deemed unreliable and inaccurate for Elizabethkingia, and broth microdilution is instead recommended for susceptibility determination [43][50]. Although successful therapy has been attributed to rifampicin, there has been a report of bacterial resistance after three days of starting treatment [51]. A similar case was reported for an E. meningoseptica isolate in the Kuala Lumpur General Hospital, which developed resistance during treatment to cefepime, a cephalosporin antibiotic that is normally highly active against both Gram-positive and Gram-negative organisms [52].
Using disk diffusion, Lau, Chow [1] reported 21 Elizabethkingia isolates from Hong Kong as susceptible to vancomycin. However, studies using broth microdilution tests on isolates from Taiwan [43][53] and Australia [36] indicated that the isolates are likely non-susceptible based on the high MICs obtained (that ranged between 8 and 256 µg/mL). Similar ranges of vancomycin MICs were obtained by Han et al. [35], who investigated Elizabethkingia isolates from South Korea using the agar dilution method and concluded that all isolates were non-susceptible based on the interpretive criteria used for Staphylococcus spp. The vancomycin resistance gene, vanW, was reported in the majority of Elizabethkingia genomes, although the exact function of vanW is currently unknown [36][44]. However, mutations in vanW have been identified in microorganisms with VanB-type glycopeptide resistance [44][54]. In view of these facts and despite some anecdotal reports of success in using intravenous vancomycin alone to treat Elizabethkingia infections [55][56], it was recommended that even if intravenous vancomycin is the favored therapy for Elizabethkingia meningitis, ciprofloxacin, linezolid, or rifampicin should also be included until future clinical studies could be carried out to conclusively determine the clinical efficacy of these vancomycin-combination regiments for treatment [50].
One of the earliest reports of the whole-genome sequences of Elizabethkingia spp. strains from Southeast Asia was from Singapore, whereby sputum isolates obtained from three patients (NUHP1, NUHP2, and NUHP3) and four from the hospital’s sink (NUH1, NUH4, NUH6, and NUH11) at the National University Hospital, Singapore, were compared against five previously sequenced E. anophelis strains Ag1 (PRJNA80705) and R26 (PRJNA178189), E. meningoseptica ATCC 12535 (NITE) (PRJNA199489), E. meningoseptica ATCC 12535 (OSU) (PRJNA198814), and E. meningoseptica 502 (PRJNA176121). This led to the discovery of 16 antibiotic resistance genes from the core genomes and 19 antibiotic resistance genes from the accessory genomes of Elizabethkingia spp., and this included genes that confer resistance to aminoglycosides, β-lactams, fluoroquinolones, glycopeptides, macrolide-lincosamide-streptogramins, tetracyclines, trimethoprim, and rifampicin [38]. A later study on two African isolates, E27017 and E18064, that compared their genomes with the genomes of 18 strains belonging to the genus Elizabethkingia from many different regions, including Malaysian and Singaporean genomic sequences that were available at that time, identified that all Elizabethkingia genomes contained at least 17 antimicrobial resistance genes [39].
A whole-genome sequencing study on three isolates of E. meningoseptica collected from an outbreak from three separate patients living in different counties in the Midwest regions of Michigan led to the identification of 22 resistance genes and 18 multidrug resistance efflux pump-encoded genes in all samples [57]. While Elizabethkingia spp. genomes shared many antibiotic-resistance genes with each other, minor differences have been reported [3][58]. Hence, genomic investigations of Elizabethkingia spp. offers invaluable novel information on the species, but unfortunately, there have not been any reports of the whole-genome sequence of Elizabethkingia spp. isolates from Southeast Asia besides those from Singapore. 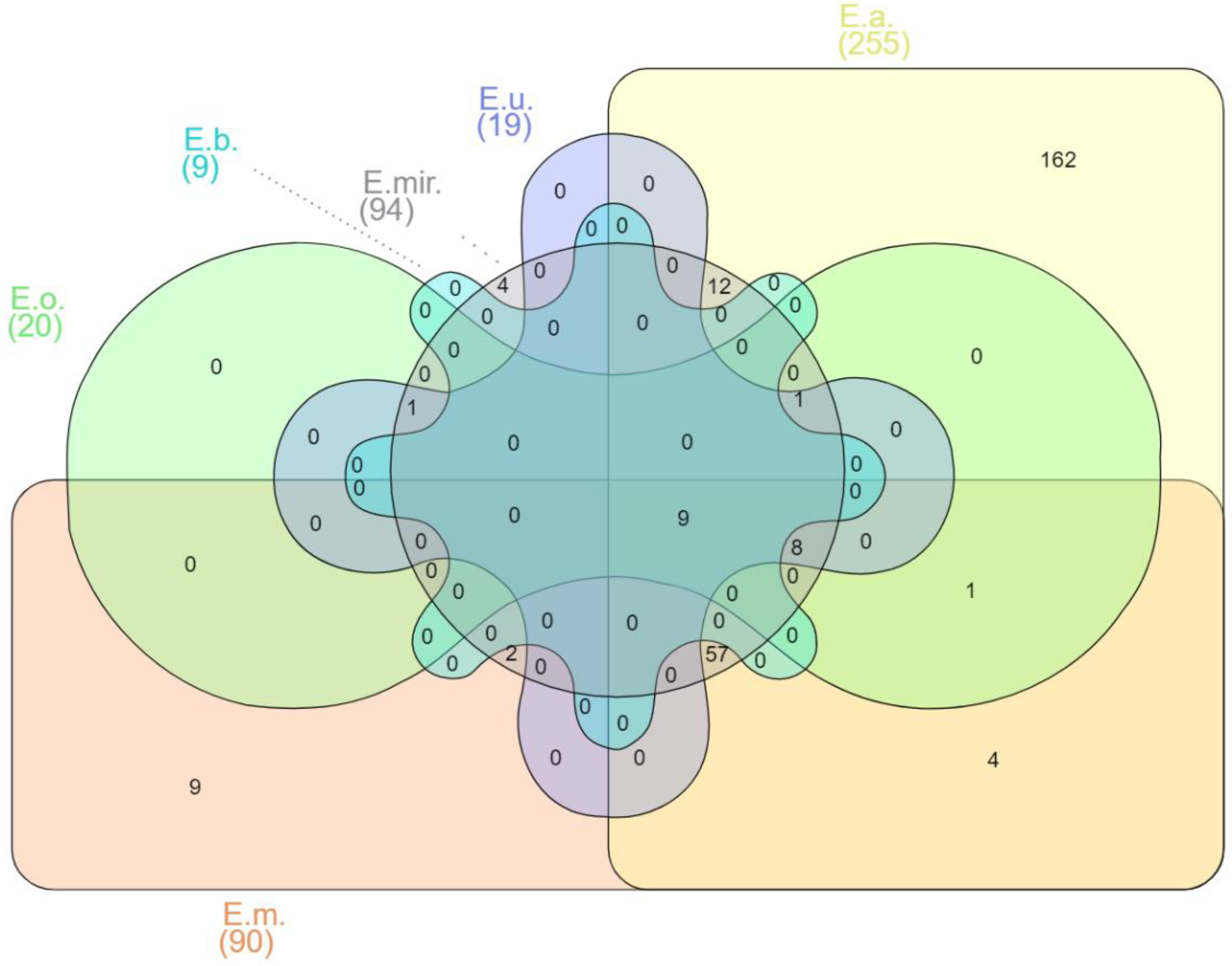 5. Sources of Isolation and Transmission

The genera Elizabethkingia are aerobic, non-fermenting, non-motile, catalase-positive, oxidase-positive, indole-positive, and Gram-negative bacilli widely distributed in soil, mosquitoes, plants, fresh and marine fish [28][73], food products [74], hospital settings [75], stagnant water, inland wetlands, and rivers [31]. Due to their biofilm-forming ability [62], they have been isolated from sinks and taps where they colonize the most, leading to nosocomial and community infections [76] (Table 1).
Table 1. Various sources of isolation of Elizabethkingia spp. in Southeast Asia.
Vector-borne transmission of the bacterial pathogen via mosquito bites has been suggested ever since the discovery of E. anophelis in the midgut of the Anopheles gambiae mosquito [101][102] and, more recently, in the salivary glands and saliva of Aedes albopictus [103]. The microbiome of Anopheles mosquitoes has evidently revealed the strong symbiotic nature of E. meningoseptica [104], which has been isolated from various independent sources, including Anopheles stephensi, the vector for the malarial parasite Plasmodium vivax [76][105][106], semi-field Anopheles gambiae females [104][106][107][108], field sampled mosquitoes in Cameroon [109][110], and laboratory-reared mosquitoes where Anopheles were the predominant species [109][111]. Another comparative study on bacterial microbiota isolated from the midgut of various Anopheles spp., which were obtained in the same region of Mae Sot District and Sop Moei District in Thailand, reported on the findings of Elizabethkingia spp. from Anopheles minimus, Anopheles dirus, Anopheles maculatus, Anopheles sawadwongporni, and Anopheles dravidicus mosquitoes [95]. However, sequences associated with the genus Elizabethkingia could not be definitively assigned to either E. anophelis or E. meningoseptica as the V3–V4 region of the 16S rRNA gene used for microbiome profiling could not differentiate between the two species [95]. Despite these multiple discoveries of Elizabethkingia spp. in the midgut and salivary glands of various mosquito species, there is currently a lack of strong direct evidence that supports Elizabethkingia infection, particularly E. anophelis, as a mosquito-borne disease [43], although this should not be ruled out with the current level of knowledge. A comparative genomics study of three cases of E. anophelis also provided evidence of vertical transmission from mother to her baby [61].
Zainuri et al. (2013) reported on the isolation of E. meningoseptica from American bullfrogs (Lithobates catesbeianus or Rana catesbeiana) suffering from red leg syndrome and cataract in Sabah, Malaysia [93]. Isolation of E. meningoseptica from bullfrogs was also described in an earlier study, in which the isolates obtained were found to be resistant to multiple antibiotics [94]. E. miricola, which had been implicated in acute infections in humans, caused a disease outbreak associated involving the internal organs of different anuran species, including northern leopard frogs (Lithobates pipiens), Chapa bug-eyed frogs (Theloderma bicolor), and Vietnamese warty toads (Bombina microdeladigitora) captured in Vietnam. The presence of β-lactamases and putative virulence genes in the E. miricola isolates were detected in silico [92].
E. miricola was also reportedly isolated from Tra catfish (Pangasius hypophthalmus) fillets in the industrial processing lines in Vietnam [98]. Tra catfish is a type of freshwater fish, which is one of the major fish species in the Mekong River, and its processed fillets are exported to more than 80 different countries worldwide [97]. Other scientists have also reported the isolation of E. meningoseptica from retail sausages in Kampar, Malaysia, although the identification was performed by traditional biochemical methods and identified as Chryseobacterium meningosepticum [74].
Furthermore, 454 pyrosequencing of the 16S rRNA gene from the bacterial community of the root of the gnetalean gymnosperm Gnetum gnemon and nearby bulk soils of a tropical forest arboretum at the Forest Research Institute of Malaysia (FRIM) at Kepong, near Kuala Lumpur, identified the mutualistic presence of E. meningoseptica and E. miricola [99]. Elizabethkingia spp. was surprisingly found in relative abundance (4.9%) on the leaves of Gnetum gnemon in comparison with rhizoplane (1.4%) [100]. These reports indicate the ubiquity of Elizabethkingia spp. in the environment and, thus, the difficulty in tracing an outbreak should one occur in the community and outside of hospital settings.

More
© Text is available under the terms and conditions of the Creative Commons Attribution (CC BY) license; additional terms may apply. By using this site, you agree to the Terms and Conditions and Privacy Policy.
Upload a video for this entry
Information
Subjects: Infectious Diseases; Microbiology
Contributors MDPI registered users' name will be linked to their SciProfiles pages. To register with us, please refer to https://encyclopedia.pub/register :
Asdren Zajmi
,
Jeanette Teo
,
Chew Chieng Yeo
View Times: 121
Revisions: 2 times (View History)
Update Date: 22 Jul 2022
Table of Contents
1000/1000
Hot Most Recent