+1 point
Thank you for your contribution! You can also upload a video entry related to this topic through the link below: https://encyclopedia.pub/user/video_add?id=25107
Check Note
2000/2000
WWOX Controls Cell Survival, Immune Response, Disease Progression

WWOX and its binding proteins form a complicated signaling network which is needed for normal physiology and/or disease progression [1][2][3][4][5][6][7][8][9][10][11]. WWOX was first discovered in 2000 [2]. Most recently, the human WWOX gene has been defined as a risk factor for AD [12]. Currently, there are many outstanding review articles documented in the PubMed database. In brief, WWOX protein possesses two N-terminal WW domains, a C-terminal short chain alcohol dehydrogenase/reductase (SDR) domain, and a nuclear localization signal present in between the WW domains [2] (Figure 1A). A mitochondria-targeting region is located in the SDR domain. Both WW and SDR domains have their own specific protein-binding partners, as reviewed in a recent article [9]. The first WW domain (WW1) possesses two tryptophans and binds PPXY (e.g., PPPY) or LPXY motif [2][13] motif in the target proteins, where X is any amino acid. However, when Y33 in the WW1 becomes phosphorylated, pY33-WWOX has an expanded binding capability with numerous proteins. 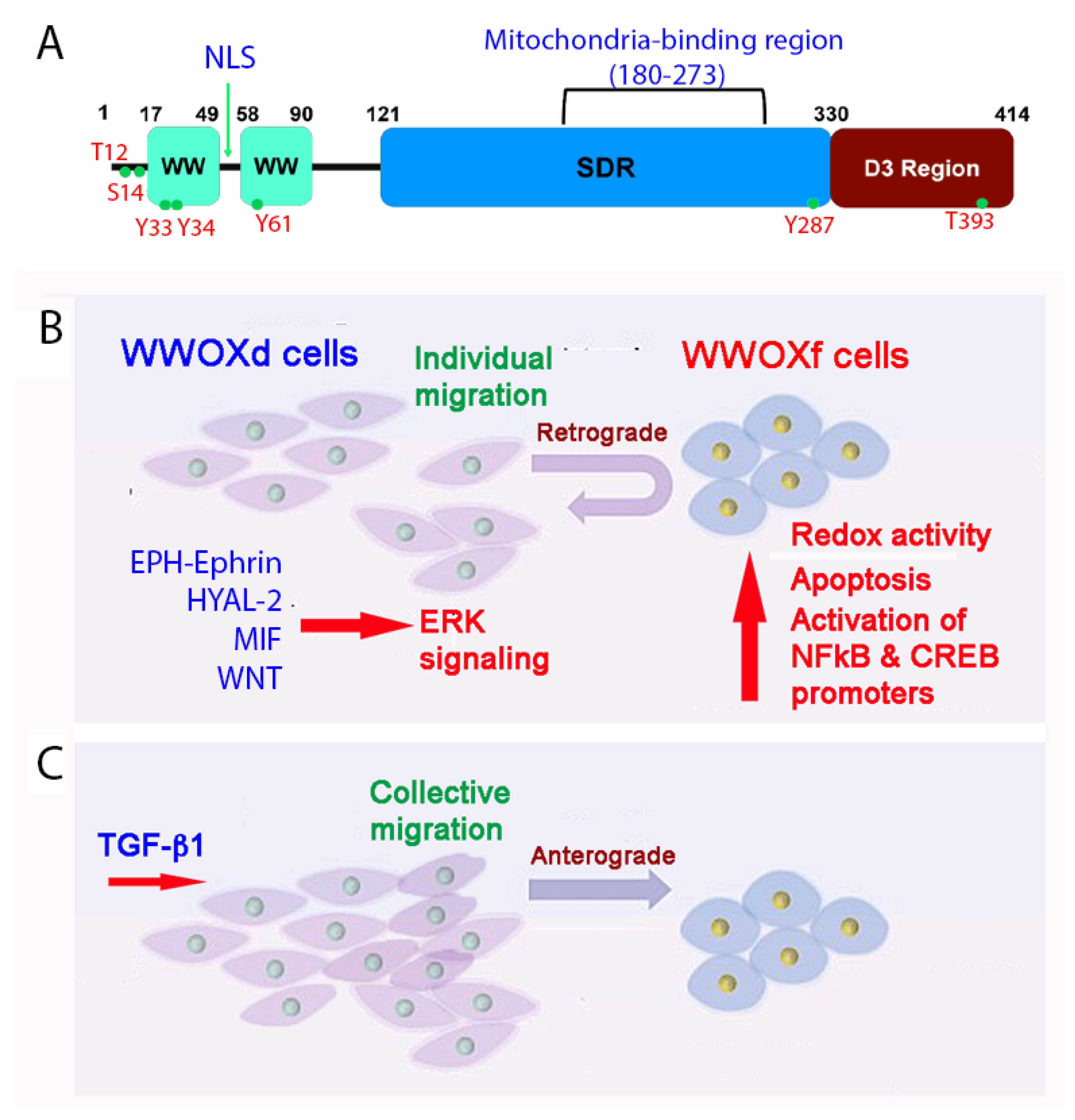 Figure 1. A schematic model for how WWOXd cells undergo retrograde migration upon facing WWOXf cells. (A) The primary structure of WWOX is depicted. (B) When WWOXd cells face WWOXf cells, WWOXd cells undergo activation of multiple signaling pathways, including MIF, HYAL-2, WNT and EPH-Ephrin, that converge to MEK/ERK pathway leading to retrograde migration. WWOXd cells have no physical contacts with WWOXf cells but are able to kill WWOXf cells from a distance. (C) TGF-β abolishes the retrograde migration and apoptosis, and induces anterograde migration and merger of WWOXd and WWOXf cells. Similarly, antibodies against MIF, HYAL-2 or EPH-Ephrin, and WNT inhibitors abolish the retrograde migration of WWOXd cells in facing WWOXf cells [14][15].
Overall, WWOX participates in many ligand/receptor-mediated signaling pathways such as WNT/β-catenin [16], JNK [17], TGFβ1/HYAL-2 [18], TGFβ/SMADs [18][19], HIPPO [20], HCG/MET [21], ], JAK2/STAT3 [22][23][24], p73 [25], and others. WW2 domain has only one tryptophan and its function is largely unknown. WW2 is proposed to line up with WW1 in facilitating the binding of WWOX with its interacting partners [26]. The SDR domain has an NSYK (Asn-Ser-Tyr-Lys) motif, which binds sex steroid hormones androgen and estrogen [2]. The SDR domain also exhibits redox activity [14][15][27], and binds tau and GSK-3β to prevent tau hyperphosphorylation [9][28][29][30]. Whether the redox activity of SDR domain limits GSK-3β-mediated tau hyperphosphorylation and subsequent tau aggregation is unknown [28][30].

Of utmost concern is that human newborns with WWOX gene deficiency suffer severe neural diseases such as seizure, encephalopathy, and early death [9][10][11][31][32]. There is no cure for the disease. Loss of WWOX enhances cell mobility [14][22]. WWOX gene deficiency in newborns results in neuronal migration disorders (or neuronal heterotopia) that lead to epileptic seizures [30][32]. Two types of cells based upon their expression of functional or dysfunctional WWOX have recently been identified [14][28]. Cells which are deficient in WWOX protein, or express dysfunctional WWOX, can be considered as metastatic cancer cells (designated as WWOXd).
At room temperature, WWOXd cells are less efficient in generating Ca2+ influx and undergo non-apoptotic explosion in response to UV irradiation. In contrast, functional WWOX-expressing cells (designated WWOXf) exhibit non-apoptotic nucleus-dependent bubbling cell death (BCD) [7] and efficient Ca2+ influx caused by UV or apoptotic stress at room temperature [14]. Formation of a nitric oxide (NO)-containing nuclear bubble per cell during BCD is due to UV-induced upregulation of NO synthase 2 (NOS2) [7]. WWOXf cells, which are mainly normal and benign cancer cells, migrate collectively and force the individually migrating WWOXd cells to undergo retrograde migration [14][15]. WWOXd cells, in return, induce WWOXf cells to undergo apoptosis from a distance without physical contact. The cytokines responsible for the induced apoptosis are unknown [14][15]. During cell-to-cell encounter, WWOXd cells exhibit activation of MIF, HYAL-2, Eph, and Wnt pathways, which converge to the MEK/ERK signaling and enables the cells to move away from WWOXf cells. Specific antibodies against MIF or HYAL-2, or inhibitors for WNT, cause WWOXf to greet WWOXd cells, and both cells merge eventually. Metastatic cancer cell-derived TGF-β1 allows merger of WWOXf with WWOXd cells [14][15]. A detailed signaling for the pathway of WNT, HYAL-2, EPH-Ephrin, EGF/EFGR, or MIF linking to ERK (or ERK1/2) is shown (Figure 2). The CD44/HYAL-2 complex prevents the binding of TGF-β1 with HYAL-2. CD44 does not appear to be involved in the HYAL-2/WWOX/SMAD4 signaling [8] (Figure 2). Together, these observations suggest WWOX controls cell migration and cell-to-cell recognition and plays a crucial role in neuronal heterotopia that contributes to epileptic seizure [14][15][22][27]. 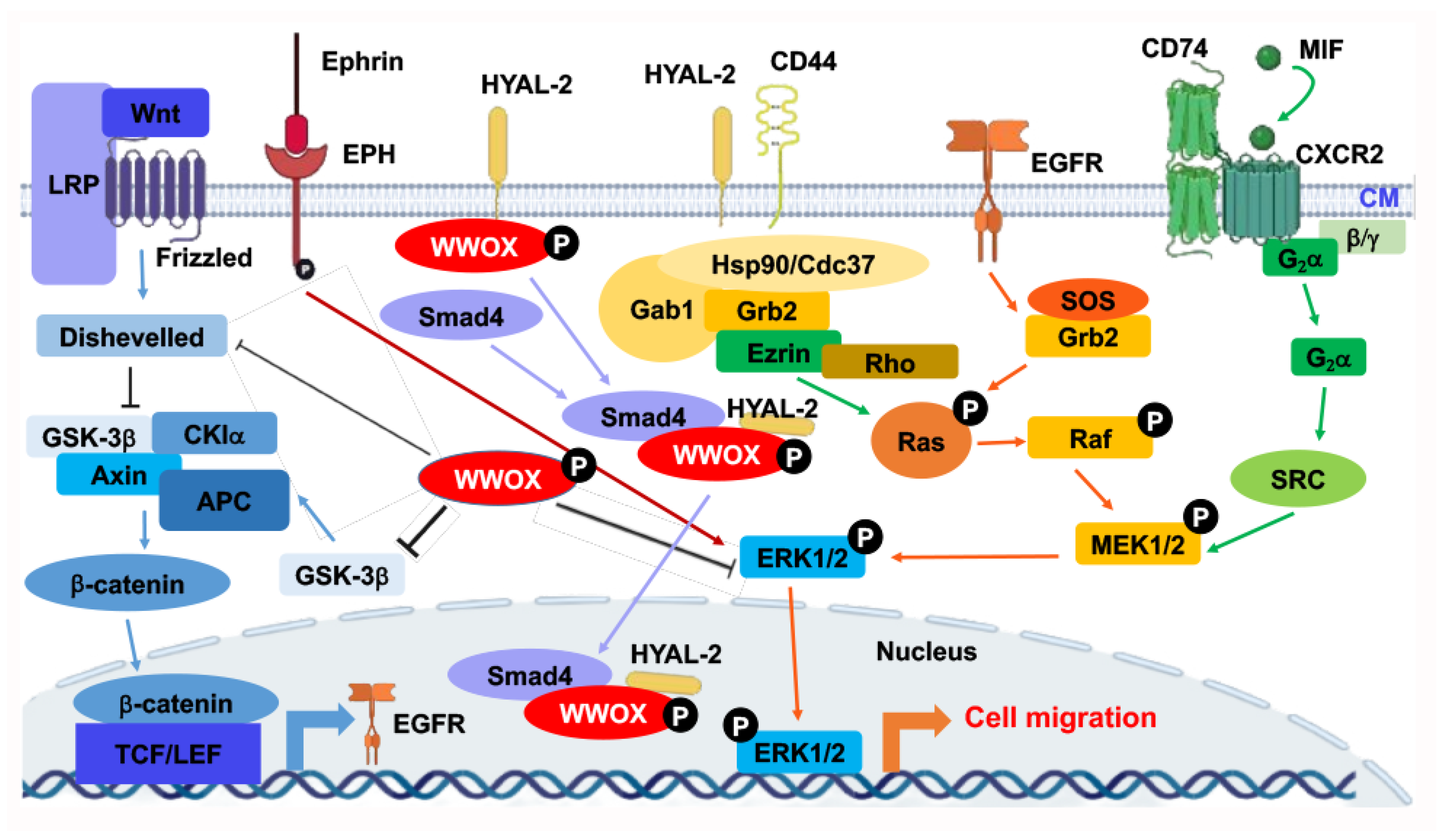 By STRING analysis (https://string-db.org/cgi/network?taskId=brQHTnXWILzL&sessionId=b73ctYMesgwG) (accessed on 19 June 2022), the first level of WWOX-binding protein network reveals that WWOX has connection with 5 interactors, namely TP53, ERBB4, DVL2, FAM189B, and WBP2 [1][17][33][34][35][36][37][38]. The binding has been validated by experimental approaches (Figure 3). Further analysis expanding the interactors up to 26 and 136, respectively, shows many biological process and molecular functions, including beta-catenin destruction complex assembly, response to metformin, ezrin [39], and many others. Again, the network can be expanded tremendously. The significance of this approach is that the data show the high complexity in the biological network and yet precise generation of functional machinery. The downside is that the analysis does not show domain/domain-specific binding interactions. Binding affinity-based interaction network is not clear. The computational approach also fails to prove the empirical observations that the stronger the binding of WWOX with intracellular proteins, the better the suppression of cancer growth and retardation of AD progression [9]. 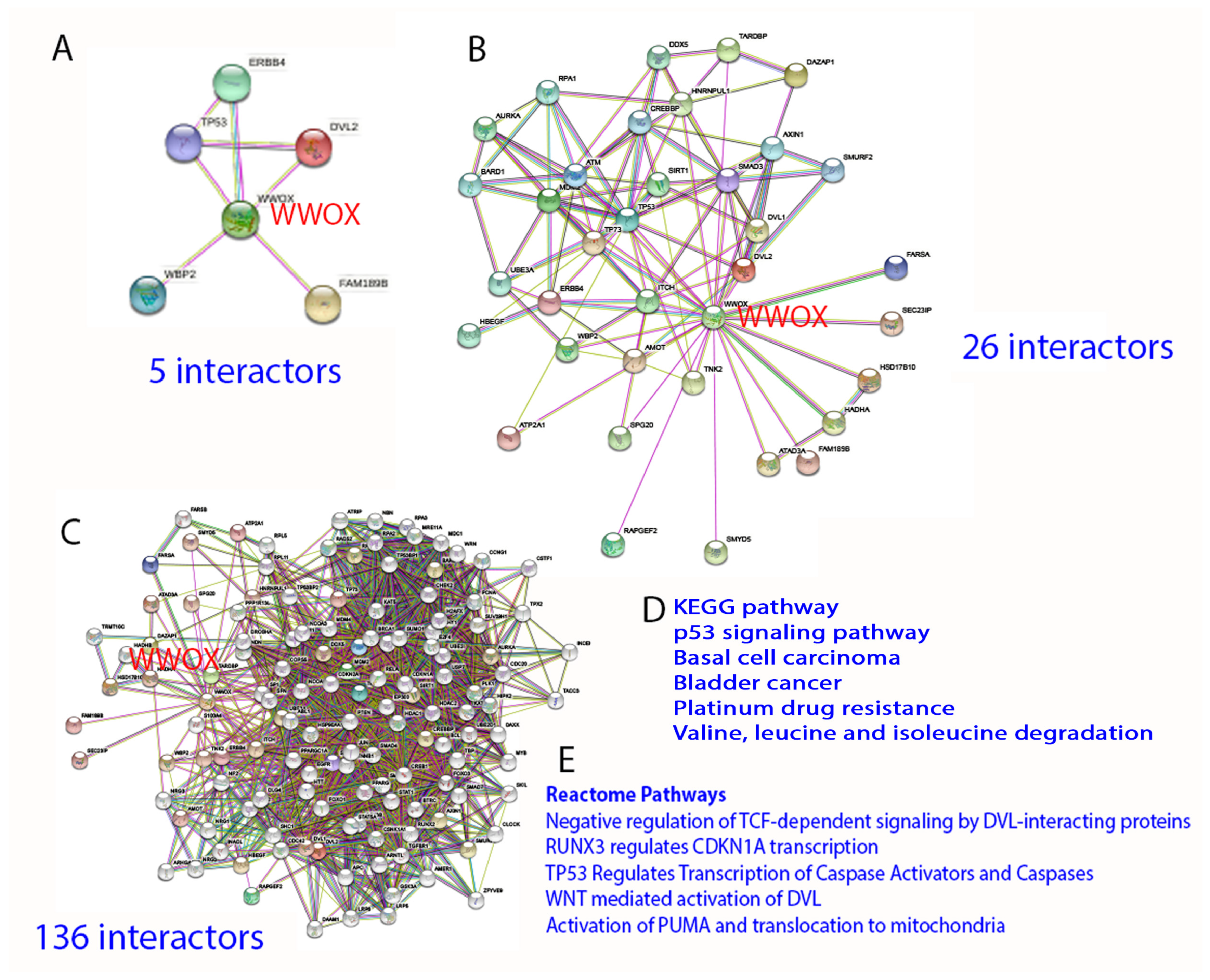 Figure 3. STRING analysis of WWOX signaling network. (A–E) The analysis starts with 5 interactors, and is then expanded to 26 and 136 interactors, respectively. Representative KEGG and Reactome pathways are shown.

Förster resonance energy transfer (FRET) microscopy is a feasible approach to measure WWOX function in a real-time manner. FRET can be utilized to determine spatial proximity among proteins either at a single or multiple protein levels in cultured cells in a real-time mode [8][33][34][40][41][42][43][44][45][46][47]. For example, binding of a CFP (cyan fluorescence protein)-tagged bait (or donor) protein with a YFP (yellow fluorescence protein)-tagged target (or acceptor) protein results in energy flow from the donor to the acceptor. In other words, an excitation wavelength is used to excite a donor protein (e.g., CFP tagged), and once excited the donor protein transfers the resulting energy to the acceptor (e.g., YFP tagged), which subsequently emits a longer wavelength with a lower energy. To be effective in signal transduction, protein proximity at 1–10 nm is needed for FRET detection. Furthermore, energy release from the first donor protein can excite two acceptors tagged with different fluorophores for determining parallel signaling pathways.

The mechanisms by which WWOX-mediated cancer suppression and inhibition of neurodegeneration take place are largely unknown. There are two surface exposed epitopes in WWOX, which are at amino acids #7-21 and #286-299 [14][48][49]. Synthetic WWOX7-21 peptide, or truncation down to 5-amino acid WWOX7-11, strongly blocks and prevents the growth and metastasis of melanoma and skin cancer cells in mice [49]. WWOX286-299 also inhibits cancer cell growth, whereas it fails to block cancer metastasis to the lung and liver [49].
By time-lapse microscopy, antibody against WWOX7-21 suppresses ceritinib-mediated breast 4T1 cell sphere explosion and death (Figure 4A,C). 4T1 cell spheres express many makers of stem cells (e.g., Sox2, Oct4 and Nanog). Ceritinib is an antineoplastic kinase inhibitor for treating anaplastic lymphoma kinase (ALK)-positive metastatic non-small cell lung cancer (NSCLC) [50]. In contrast, WWOX7-21 peptide potently enhances the function of ceritinib in causing the explosion and death of 4T1 cell spheres (Figure 4B,C) [49]. pS14-WWOX7-21 peptide or WWOX7-21 antibody supports cancer survival by blocking ceritinib cytotoxicity (Figure 4A–C). Further analysis reveals that ceritinib-mediated cell death is due to rapid upregulation of proapoptotic pY33-WWOX, downregulation of prosurvival pERK, prompt increases in Ca2+ influx, and disruption of the IκBα/WWOX/ERK prosurvival signaling [49]. WWOX7-11 (AGLDD) peptide does not block ceritinib cytotoxicity in vitro (Figure 4B). In stark contrast, WWOX7-11 is even more powerful than WWOX7-21 in blocking cancer cell growth in vivo [49]. The mechanism by which WWOX7-11 works in an opposite fashion in vitro and in vivo is not clear. Antibody against WWOX286-299 also enhances ceritinib-mediated 4T1 cell sphere explosion and death. The observations indicate that WWOX with S14 phosphorylation is pro-survival for cancer cells [49].

6. Phosphorylation Status of WWOX in the HYAL-2/WWOX/SMAD4 Complex and Disease Progression

Endogenous pS14-WWOX protein is accumulated in the lesions of growing tumors and AD brains [51][52]. Suppression of WWOX phosphorylation at S14 by Zfra4-10 peptide results in significant reduction in cancer growth in mice [52], and enhanced restoration of memory loss and mitigation of AD-like symptoms in triple transgenic (3xTg) mice [51]. pY33-WWOX, but not pS14-WWOX, is needed for binding with HYAL-2 and SMAD4 in vivo [14]. Whether pY33-WWOX is downregulated and pS14-WWOX upregulated in the HYAL-2/WWOX/SMAD4 complex during disease progression is unknown. Zfra, known as zinc finger-like protein that regulates apoptosis, is a 31-amino-acid protein [8][51][52][53][54][55]. As short as 7 amino acids, Zfra4-10 (RRSSSCK) strongly suppresses the progression of cancer and AD [51][52]. S8 is a determined phosphorylation site, and is a key to the function of Zfra [8][51][52]. Additionally, Zfra4-10 blocks NF-κB-mediated inflammation and accelerates degradation of proteins in the AD pathologies, as well as induction of the activation of HYAL-2+ CD3− CD19− lymphocytes to kill cancer in vivo [48][51][52][53].