Submitted Successfully!
Thank you for your contribution! You can also upload a video entry related to this topic through the link below:
https://encyclopedia.pub/user/video_add?id=251
Check Note
2000/2000
Oral Mucosal Epithelial Cells
Edit
Upload a video
This entry is adapted from 10.3390/ijms21020411

The corneal surface is an essential organ necessary for vision, and its clarity must be maintained. The corneal epithelium is renewed by limbal stem cells, located in the limbus and in palisades of Vogt. Palisades of Vogt maintain the clearness of the corneal epithelium by blocking the growth of conjunctival epithelium and the invasion of blood vessels over the cornea. The limbal region can be damaged by chemical burns, physical damage (e.g., by contact lenses), congenital disease, chronic inflammation, or limbal surgeries. The degree of limbus damage is associated with the degree of limbal stem cells deficiency (partial or total). For a long time, the only treatment to restore vision was grafting part of the healthy cornea from the other eye of the patient or by transplanting a cornea from cadavers. The regenerative medicine and stem cell therapies have been applied to restore normal vision using different methodologies. The source of stem cells varies from embryonic stem cells, mesenchymal stem cells, to induced pluripotent stem cells. This review focuses on the use of oral mucosa epithelial stem cells and their use in engineering cell sheets to treat limbal stem cell deficient patients.

The stem cell niche is precisely located at the level of palisades of Vogt, in the limbus [[3]]. Injury to the limbal niche prevents corneal epithelial cell renewal and results in the growth of conjunctival epithelium over the cornea. Conjunctival growth over the cornea is accompanied by the neovascularization of the cornea. Many studies reported that the limbal region functions as a barrier between the cornea and conjunctiva. The role of the barrier is to block the conjunctivalization and the neovascularization of the cornea [[4][5][6][7]]. Damage to this barrier leads to the development of limbal stem cell deficiency (LSCD). The process of conjunctivalization, where conjunctival epithelial cells invade and populate the corneal surface, results in neovascularization, opacification, and inflammatory cell infiltration [[8][9][10]]. This limbal stem cell deficiency leads to different levels of visual impairment, as reported by the international Limbal Stem Cell Deficiency Working Group [[8], [11],[12]]. LSCD can be caused by exogenous trauma, such as thermal burns, chemical injury (alkali burn), or endogenous eye diseases (e.g., Stevens–Johnson syndrome, ocular pemphigoid, aniridia (a genetic disorder), contact lenses, multiple surgeries, or microbial infection) [[11], [13]].

No approved treatment currently exists for LSCD patients other than: (1) autologous grafting of limbal stem cells [[16][17]] and (2) allografting of limbal epithelium from a deceased donor [[18][19]]. Autologous grafts produce excellent results in treating the LSCD cornea because the risk of graft rejection from the transplant is reduced. However, this treatment has limitations: (1) this approach cannot be performed if the patient has bilateral LSCD, which is a challenging task for ophthalmologists [[20]]; (2) a risk exists of damaging the healthy cornea [9]. Donor cornea allograft treatment heavily depends on the supply of donor corneas provided by eye banks. The shortage of donor eyes is well known worldwide as a serious problem [[21]]. Even when a donor cornea is grafted onto a patient’s eye, a long-term immunosuppressant treatment to decrease the graft rejection risk is required [[22][23]]. 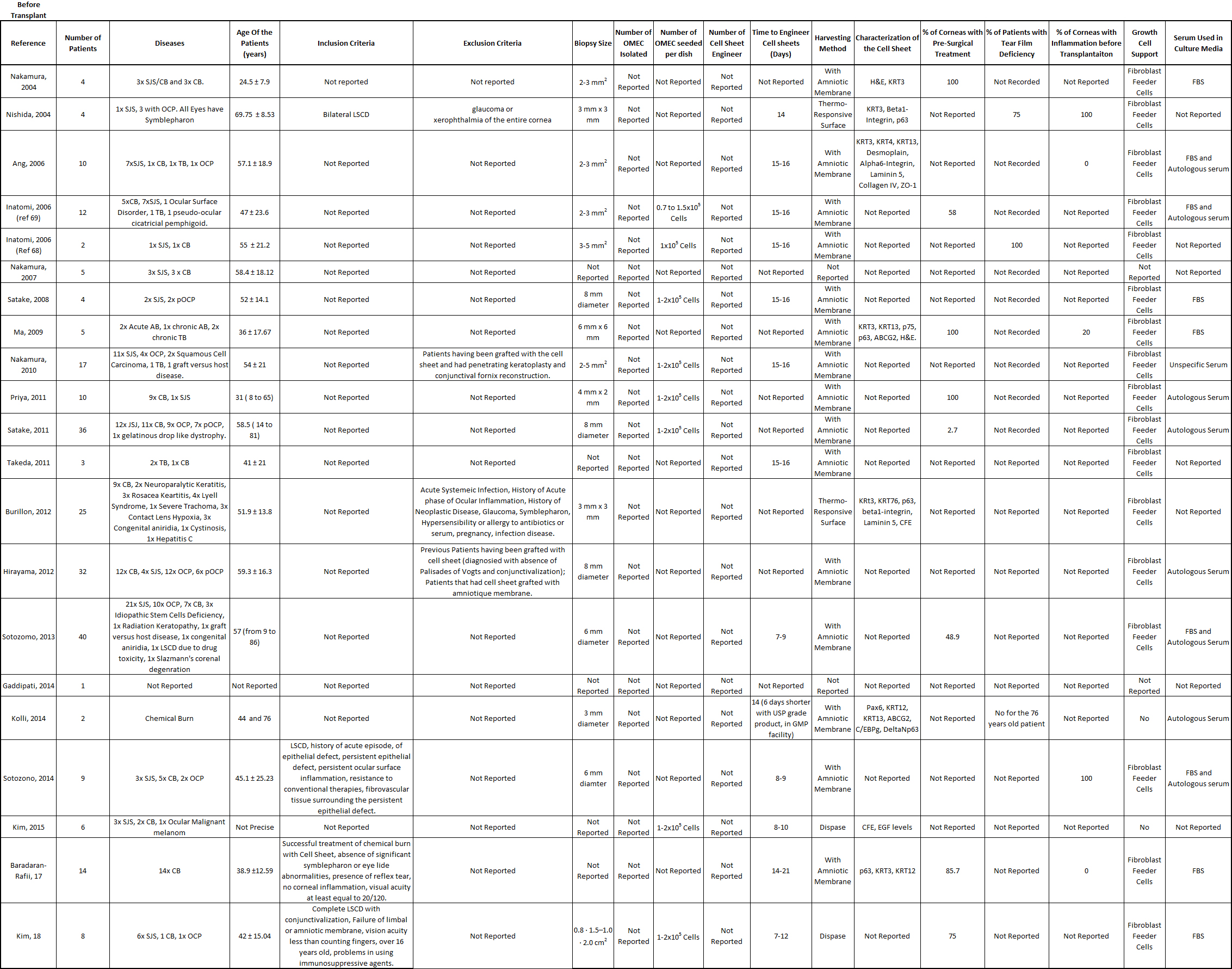 In general, the results are very positive and encouraging, but the technology of oral mucosa epithelial cell sheet can be improved. The average time for the follow-up of the patients was around two years, with a maximum of 7.5 years, for all the clinical trials involving oral mucosal epithelial cell sheets to treat LSCD. The visual acuity improved for the majority of the patients treated with oral mucosal epithelial cell sheets. For 246 transplanted corneas, 52.8% of the corneas demonstrated an improvement, 8.2% were steady, and 2.9% deteriorated. Based on a review, the transplant of limbal stem cells was over 70% successful, and it is thought that this success rate can be increased. We think that oral mucosal epithelial cell sheet technology to treat LSCD can also be improved, because only 52.8% of the transplanted cornea resulted in improved visual acuity. Neovascularization of the grafted cornea occurred [[24][25][26]], but never grew over the cornea, indicating that cultured autologous oral mucosal epithelial cell sheet (CAOMECS) can block the neovascularization of the cornea of the healthy cornea [[27]]. The mechanism of action of the cell sheet is not well understood, but it could involve a combination of the physical barrier and the production of anti-angiogenic factors. The physical barrier function is indicated by the decrease in the corneal conjunctivalization level after the epithelium cell sheet graft, but this is not always the case [[28][29]]. Corneal opacity is another aspect of patient outcome. Corneal opacity decreased over time after a cell sheet graft in some studies [[30],[31]]. If the opacity did not improve and was persistent, penetrating or deep lamella keratoplasty (PKP and DALK, respectively) was performed [[32][33][34][35][36][37]]; in some cases, two years after the initial grafting [[28], [38]]. PKP and DALK should only be performed after cell sheet graft and once the cornea surface is stable.

A total of 55 adverse events (AEs) was reported, with only nine severe adverse events (SAEs) among the 249 treated patients. Among the 55 AEs, persistent epithelial defects (PEDs) were the most frequent (30 cases), and they were recurrent after the initial cell sheet transplantation (54.54% of the total AEs). A review explained how persistent epithelial defects are treated [[39]]. In some of the clinical studies, the PEDs resolved by themselves with the help of grafted cell sheets or conjunctival cells [[33], [40][41]]; antibiotics were used [[25]], a second reoperation was performed (oral mucosa epithelial cell sheet, amniotic membrane, allogenic corneal, or limbal stem cells transplants) [[33], [37], [40]], with a contact lens bandage [[26], [42]]; or they did not resolve [[29], [32], [43][44][45]]. Intraocular pressure was reported for 14 of the patients (5.62% of all patients), which resolved with specific treatment, such as antiglaucoma medication or carbonic anhydrase inhibitor [[28], [29]]. Infection of the cornea was detected in four patients (1.6% of the total number of patients), and the infections resolved with antibiotic treatment [[25], [29], [32], [37]]. Some other AEs were recorded, such as cataract, pain, corneal recurrence, Meibomian cyst, keratitis, symblepharon formation, drug induced allergy, and liver dysfunction, which resolved after stopping a systemic drug treatment [[32],[35], [43]]. Nine SAEs were reported: two corneal perforations, where one cornea healed with a small patch graft [36], and the patient in the other study was withdrawn [[43]]; seven cell sheets were rejected [[33], [35], [37], [43]]. Follow up and reports of adverse events are reported in the table S3. 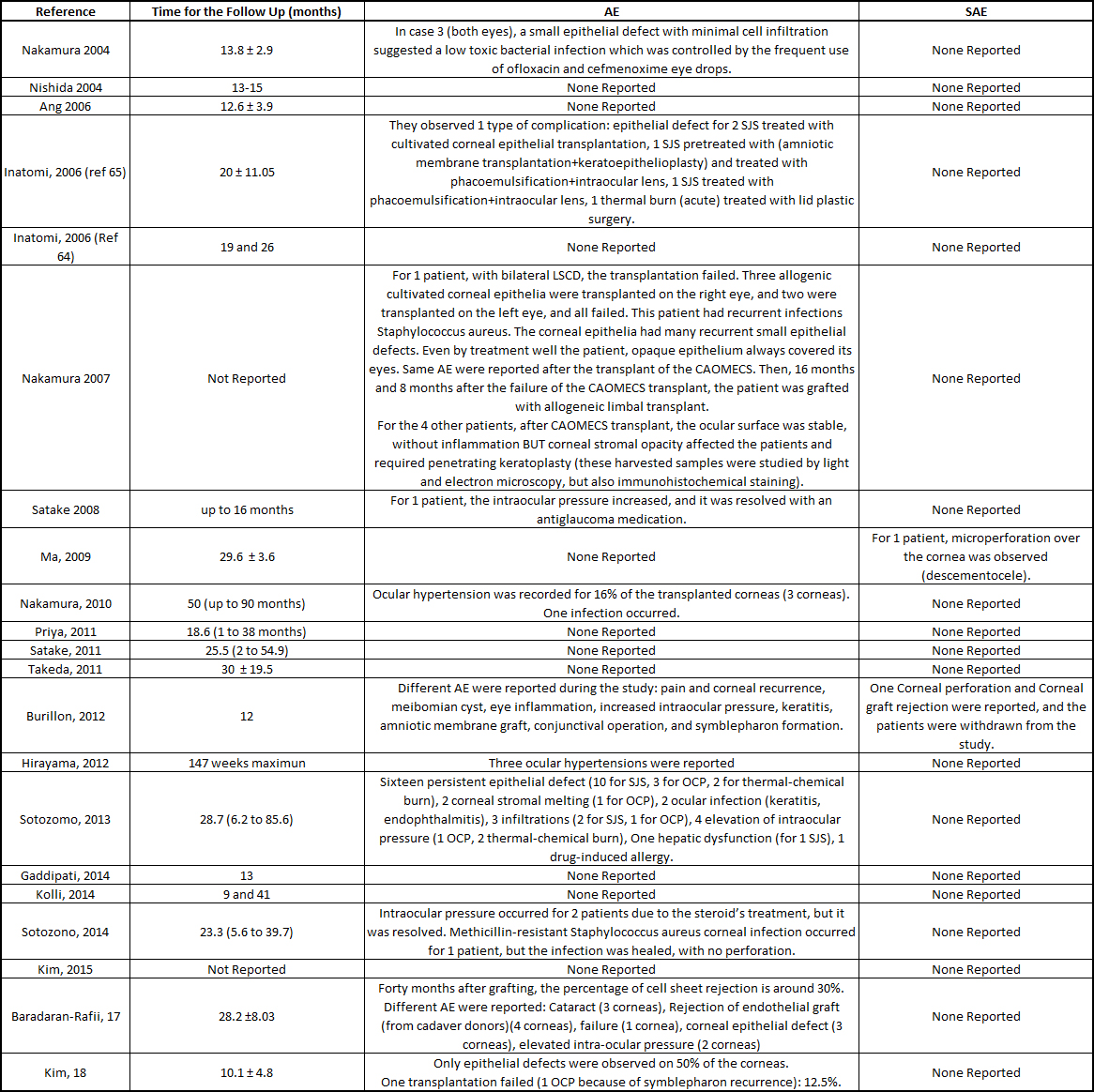 Table S3: Summarize of the patients follow up and reports of the severe and adverse events.

More
© Text is available under the terms and conditions of the Creative Commons Attribution (CC BY) license; additional terms may apply. By using this site, you agree to the Terms and Conditions and Privacy Policy.
Upload a video for this entry
Information
Subjects: Materials Science, Biomaterials
Contributor MDPI registered users' name will be linked to their SciProfiles pages. To register with us, please refer to https://encyclopedia.pub/register :
Joan Oliva
View Times: 625
Revisions: 3 times (View History)
Update Time: 30 Oct 2020
Table of Contents
1000/1000
Hot Most Recent