+1 point
Thank you for your contribution! You can also upload a video entry related to this topic through the link below: https://encyclopedia.pub/user/video_add?id=25016
Check Note
2000/2000
Euphorbia neriifolia Linn.

Medicinal plants have considerable potential as antimicrobial agents due to the presence of secondary metabolites. Researchers aim to summarize the classification, morphology, and ethnobotanical uses of Euphorbia neriifolia L. and its derived phytochemicals with the recent updates on the pharmacological properties against emerging infectious diseases, mainly focusing on bacterial, viral, fungal, and parasitic infections.

This plant produces a milky latex that is traditionally used to treat a wide range of diseases, including skin diseases, digestive issues, wounds, hemorrhages, bronchitis, tumors, leukoderma, and so on. The plant also has immunomodulatory, anti-inflammatory, and analgesic properties [1]. Phytochemical analyses resulted in the identification of various classes of secondary metabolites, including Euphol, monohydroxy triterpene, nerifoliol, taraxerol, β-amyrin, glut-5-(10)-en-1-one, neriifolione, and cycloartenol, etc. These compounds are also proven to exhibit a wide range of biological activities [2].

E. neriifolia is a glabrous, erect branching succulent xerophytic tree or shrub that grows to a height of 20 feet (1.8–4.5 m) with jointed cylindrical or obscurely 5-angled branches [3]. E. neriifolia is quite similar to E. nivulia but may be identified by the location of the thorns, which, in the former, sprout from warty nodes, whereas they sprout from flat corky patches in the latter [4].

The young leaves are dark green in color and have a leathery feel (Figure 1). Peri-clinical sections at the third and fourth layers of the peripheral meristem initiate the leaves [5]. 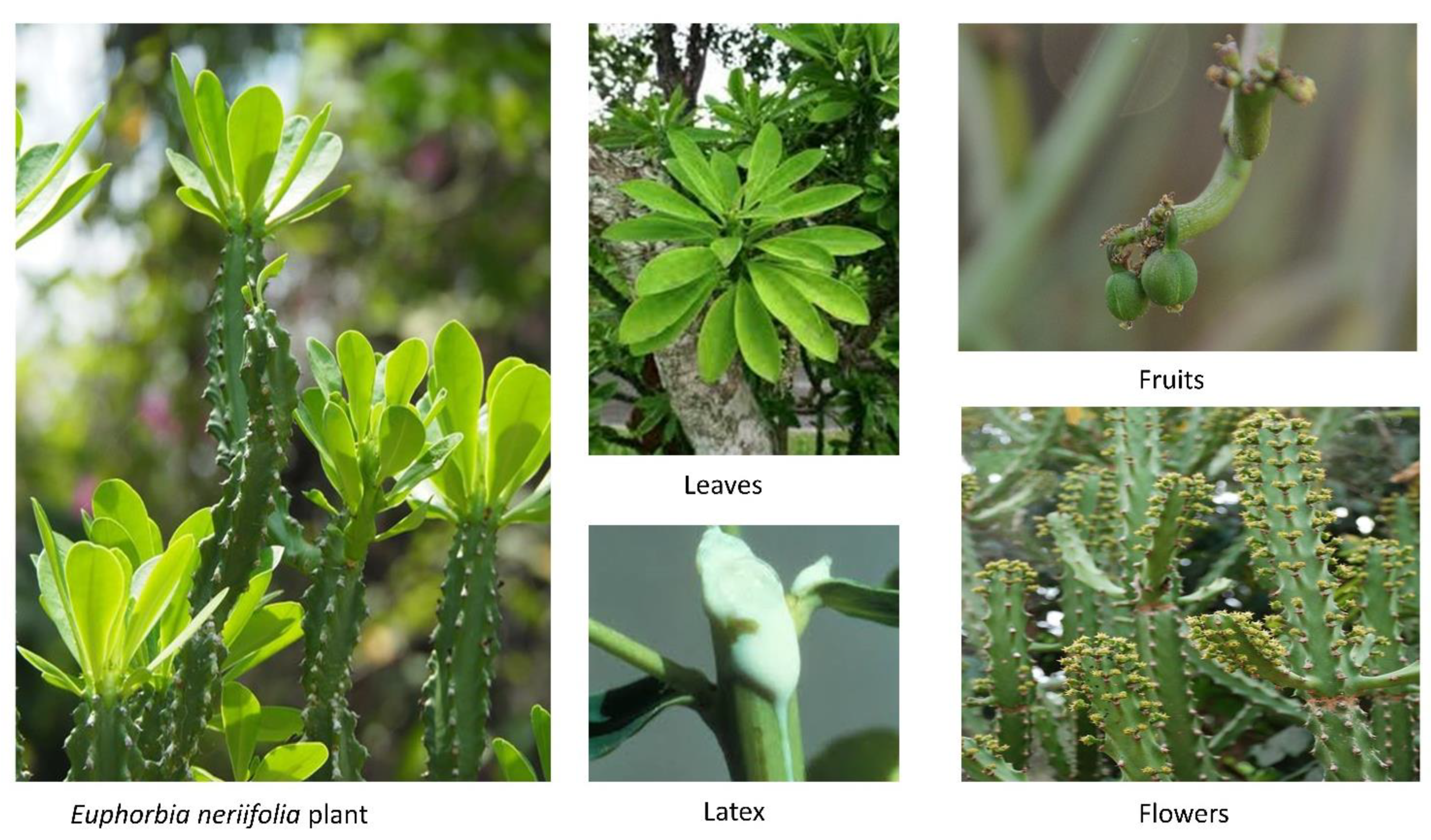 Yellowish involucres emerge in clusters of three to seven in a cyme, generally in threes, on a very small fleshy peduncle of around 3.8 mm in length. The lateral flowers in the involucre are pedicelled and bisexual, whereas the center blooms are typically male and sessile. Male involucre, 2-bracteate, bearing a bisexual involucre in the bract axils, the opposing bracts of which may carry a peduncle each and are 3-lobed with a serrated central lobe. Involucre lobes are widely cuneate and fimbriate, and anthers are sagittate and apiculate, similar to those of E. nivulia [4].

Male and female flowers occur concurrently inside the same bunch. On slender, inflexible, and forked peduncles, three to seven flowered cymes or panicles develop laterally in the axils of the top leaves. Globose are 1.5–2 mm × 4–5 mm in size, reddish and flattened, noticeable in groups of trees, the center one is subsessile, the lateral ones have a 6–7 mm peduncle, 5 mm oblong, 1–3 mm broad cyathial glands. Although the corolla is lacking, the involucres are adorned with two roughly round to oval, bright crimson bracts about 3–7 mm in length. The inflorescence, or cluster of flowers on the plant, is of the cyathium type (one female flower and numerous male flowers are present in the same bunch) [6].

Fruits resemble capsules. Three-fid style, stigmas somewhat dilated, smooth, ten to twelve millimeters in diameter, and minutely serrated. They appear in a variety of climates and are only visible in February and March [6].

Seeds are flat and covered with fine hairs [2].

The saccular branches are characterized by a pair of robust stipular spines on the tubercles of branchlet, which are confluent in five vertical spinal lines or ribs. Branches become increasingly obtusely 5-gonous in segmentation. Throughout the plasto-chronic stages, the central meristem is prominent. The central and peripheral meristems have a tight histogenic connection. Reticulate bark covers the trunk [2].

The stem is cylindrical, succulent, and glabrous, with internodes ranging in length from 4–10 cm and diameter from 2–6 cm. Nodes are restricted to a diameter of 1–4 cm and include spirally running rows of tubercles inserted into flat, creamish-white corky bases. At the base of the tubercle, a tiny circular gland is situated. The nodal area is characterized by shorter spines measuring 1–5 mm in length and a neighboring bud. Acrid or astringent in flavor. Dried stems are stiff, shriveled, ridged, furrowed, and wrinkled lengthwise. It is readily broken at the node, revealing hollow pith covered in white parenchymatous papery scales.
A transverse stem incision uncovered an epidermal layer with stomata and a well-developed striated cuticle that was externally protected. There are vertically organized and radially elongated chlorenchyma bands and parenchymatous bands alternately in the hypodermis. Many microscopic oil globules and latex tubes fill the hypodermis. A region of continuous pentagonal stellar area surrounds the cortex, giving it its broad and central appearance. Cortical zones and starch grains abound in the smallest cells. A thick layer of parenchymatous cells covers the whole surface of the pith, which is made up of big, thin-walled cells. With regard to the stellar region, it is made of two–three vessels, thin-walled fibers, and parenchyma as well as medullary rays that carry on the phloem in single or clustered form and one or more rings of angular xylem. The pericycle is marked, parenchymatous, and laced with thick-walled circular non-lignified threads that are not connected to each other. Vascular laticiferous tissue is immersed with glandular latex [7].

Glands are transversely oblong and yellow [8].

The powder is a creamy golden color. It has epidermal pieces with straight walls and an abundance of actinocytic and few paracytic stomata. Simple striated cuticle cells with branching laticiferous capillaries as well as granules of starch in the form of a dumb-bell. When powdered, many stone cells were identified. They are made up of fibers with thick and thin walls, as well as sclereids that originate from the spine. The powder was dissolved in glycerin and colored with iodine, phloroglucinol, strong hydrochloric acid, and Sudan III. The leaf powder contains abundant calcium oxalate crystals and starch grains with idioblastic, rosette, square, prismatic, and acicular shapes. Additionally, the powder had well-organized annular arteries, anomocytic stomata, and a unicerrate multicellular trichome with a blunt apex. Schizogonous cells, polyhedral or acutely angled starch grains, and lignified xylem fibers were found in the epidermal cells, spongy parenchyma, xylem parenchyma, and vittae-volatile. After treatment with HCl, the calcium oxalate crystals change form from acicular to needle-shaped [9].

Latex is a milky sap-like fluid present in cells and arteries that is often injected following tissue damage that occur during the laticiferous system’s formation [7].

E. neriifolia is well-known in India for its medicinal properties, which include antidiabetic, antiarthritic, anticonvulsant, antimicrobial, and antioxidant properties [15]. It is also used for wound-healing, radioprotective, immunomodulatory, spasmodic, anticancer, aphrodisiac, and purgative properties [16][17]. It is frequently utilized in Unani medicine as a single or combined therapy for arthritis and a range of other conditions, including local anesthetic, antibacterial, respiratory stimulant, antiviral, paronychia, and interferolick, [18]. Flavonoids, which are included in the plant’s functional diet, have been demonstrated to reduce the risk of chronic illness [19].
This plant is used in Ayurveda to treat bronchitis, tumors, loss of consciousness, leukoderma, piles, inflammation, delirium, spleen enlargement, ulcers, anemia, and fever [2][20]. Indian medicine “Kshaarasootra” uses E. neriifolia as one of its active ingredients to treat anal-fistula. To make “Kshaarasootra,” apply fresh snuhi or E. neriifolia latex to surgical linen thread, then mix with a particular alkaline powder (kshaara) made from Achyranthes aspera and turmeric powder made from dried Curcuma longa roots. “Kshaarasootra” is extremely beneficial in curing different fistulous tracks. It is an excellent tool. Research conducted by the Indian Council of Medical Research sought to assess the effectiveness of “Kshaarasootra” for the treatment of fistula-in-ano. The recovery time with “Kshaarasootra” was longer than with surgery (4 weeks vs. 2 weeks), but the long-term outlook was better. Patients with fistula-in-ano had an effective, ambulatory, and safe treatment option in “Kshaarasootra”, according to the study’s findings. With the addition of “stannadi-vrana” and the oral delivery of “shigru guggulu” (2 tablets t.i.d.) during the treatment course, “Kshaarasootra” demonstrates excellent outcomes in chronic nonhealing milk fistulae [21]. Specific plant parts or combination of two or three parts of E. neriifolia is also used in traditional treatments