Submitted Successfully!
Thank you for your contribution! You can also upload a video entry related to this topic through the link below:
https://encyclopedia.pub/user/video_add?id=24807
Check Note
2000/2000
Affecting Erosion Factors
Edit
Upload a video
This entry is adapted from 10.3390/nano12132194

Erosion is a major issue since it results in several problems, such as failure/collapse, the degradation of surfaces, severe accidents, and vulnerabilities in many industrial systems and processes. Surface degradation by erosion is a slow but nevertheless continuous and unpreventable process in numerous industries, such as the oil and gas industry; erosion also affects aircraft, steam engines, and the rotor blades of power plant drive turbines, including wet-steam turbines, as well as other turbine plants that operate on wet steam.

Erosion continues to evolve as an important research area; it has attracted the interest of researchers for over 125 years because the reliability of surface integrity is of interest to most industries. Erosion is a major issue since it results in several problems, such as failure/collapse, the degradation of surfaces, severe accidents, and vulnerabilities in many industrial systems and processes. Surface degradation by erosion is a slow but nevertheless continuous and unpreventable process in numerous industries, such as the oil and gas industry; erosion also affects aircraft, steam engines, and the rotor blades of power plant drive turbines, including wet-steam turbines, as well as other turbine plants that operate on wet steam [1][2]. The erosion of surfaces by solid particles is a vigorous process that causes the removal of material from the target surface due to diverse conditions, including viscous fluid flow, the impingement of fast-moving particles, and frictional movement. Indicators of erosion were discussed by Barkoula and Karger-Kocsis [3]. Erosion involves the weakening of components; material deformation; surface cutting, crushing, scratching, and mortification; the absence of directional grooving; abrasion; the detaching of the surface layer of protective coatings; and a decline in the operational life of components, as seen in Figure 1. Due to high maintenance costs and the unplanned nature of stoppages, the control of erosion problems is very time-consuming and expensive. Erosion is seen as a major challenge in the industries it affects, where its impacts on plants include: 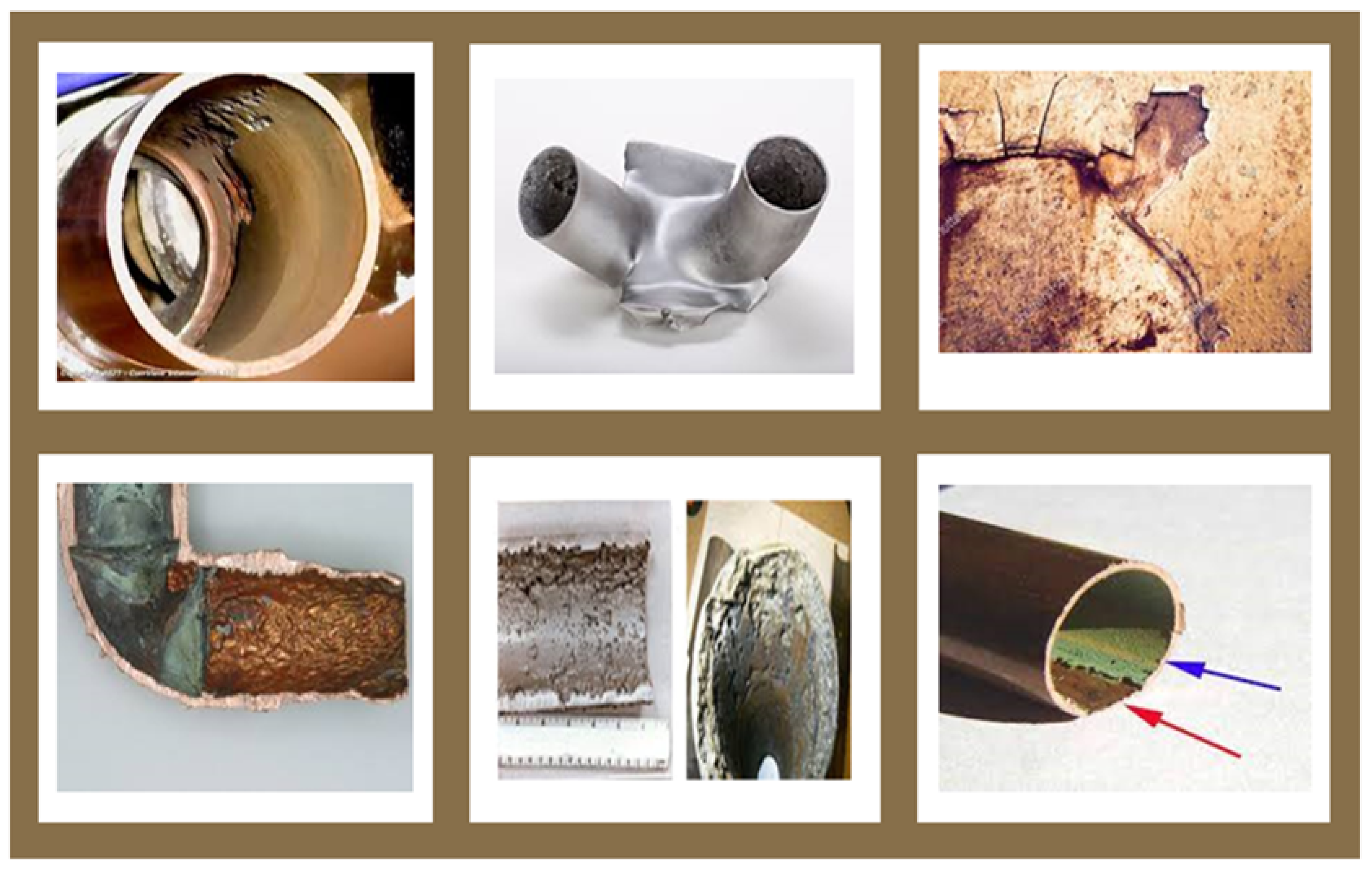 Figure 1. Erosion effects on surfaces.
Developments in production methods and advancements in materials and coatings that offer exceptional performance and distinct properties represent one of the most crucial imperatives in modern industrial techniques [4][5]. During their lifetime, surfaces are subjected to many hazardous influences that cause their deterioration, such as thermal and chemical degradation, stress corrosion, external loads, abrasive particles, and pressure [6][7]. Understanding the kind of activities that take place when a surface comes in contact with gases, chemicals, solid hard particles, or viscous fluids can allow to predict the lifespan of affected surfaces and utilize the finest materials for the relevant application and working conditions [8][9].

Erosion by fluid or particles is a vigorous phenomenon that includes gradual harm to a surface caused by an impinging material because of repeated collisions and interactions. Based on the physicomechanical properties of the substrate surface or the substrate coating, the wear of the surface also differs according to the flow of the abrasive material [10][11]. Numerous researchers have reported the outcomes of several assessment parameters and described the effect of factors such as a material’s nature, form, and amount of fiber on the performance of various polymers under erosive environments. In addition, other important parameters include the angle of attack between the velocity vector of the erodent and the impinging surface; the erodent velocity; the size of the erodent and its form; the physicomechanical characteristics of the impinging material (hardness and impact toughness); and the flow temperature, humidity, and pressure. Some of the important factors related to erosion are summarized in Figure 2. 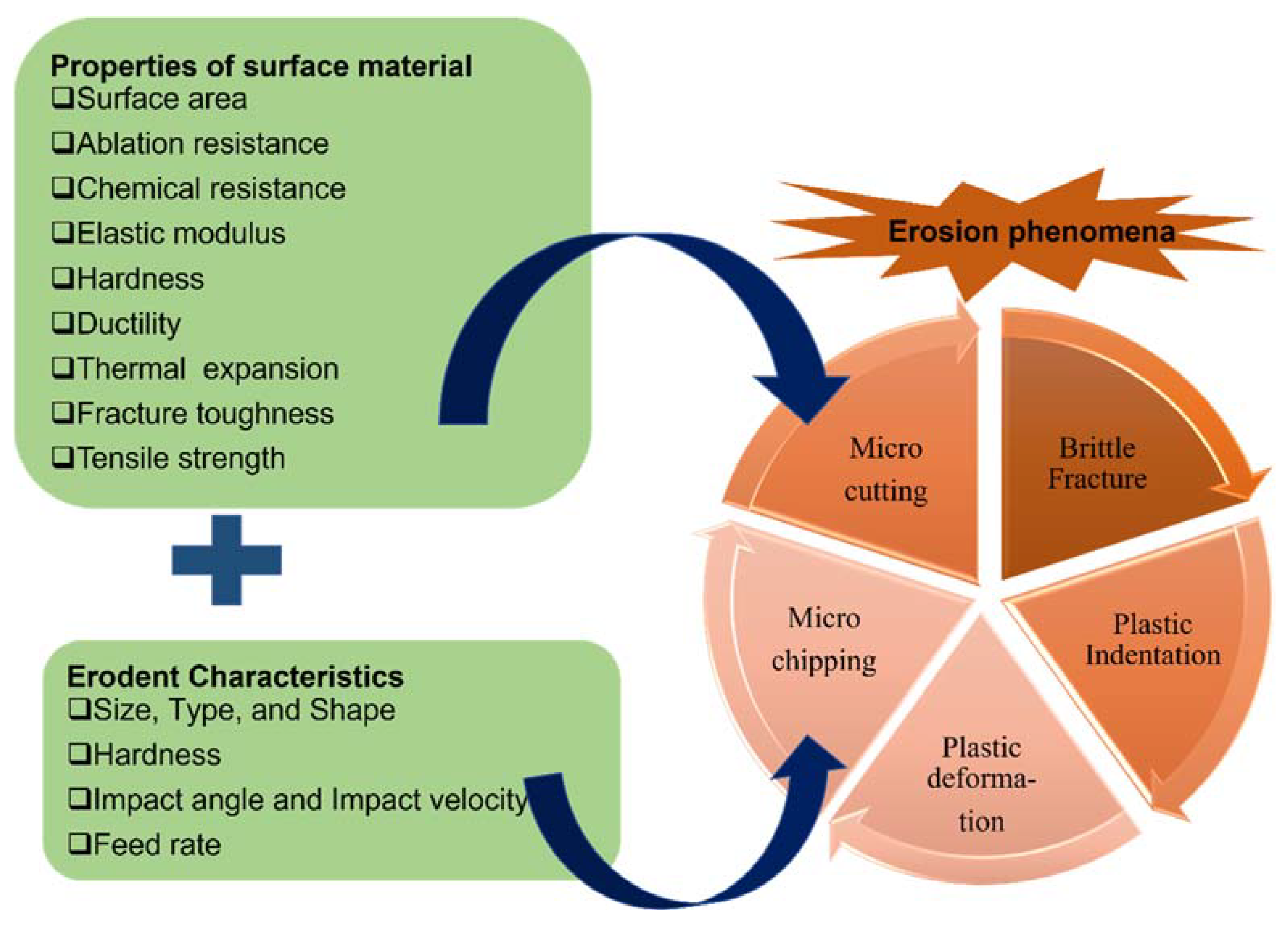 Figure 2. Factors governing erosion phenomena.
There have also been numerous studies carried out to explore the prompting contributors to solid particle erosion, comprising impact velocity [12][13], impingement angle [14], particle flux rate [15][16], temperature [17], char of the impinging surface, and parameters such as the shape of the erodent, its dimension, and the toughness of the materials. The complicated nature of the solid particle process is exposed by these variables. Even though wear phenomena caused by solid particle impacts have been extensively studied, there are still several aspects remaining to be explained that may be explored by researchers, including the production of innovative materials to decrease erosion and the study of an inclusive erosive resistance mechanism [18].
Mathematical theoretical models using artificial neutral network approaches and linear regression have also been successfully applied using factorial design. It has been suggested that the extent of the exposure to erosive conditions, the inclination angle, the velocity of erodent, the radial distance, the path of the sample’s rotation in the medium, and the distance tracked all have an influence on the wear resistance of materials [19][20].
Overall, an ideal erosion-resistant material should have an elevated surface area/volume ratio, high hardness, high adhesive strength, small filler size, and a good dispersion of filler; these characteristics result in better mechanical properties, namely scratch resistance and high ductility without strength loss, as presented in Figure 2. To achieve these parameters, synthesizing nanocomposites utilizing erosion-resistant polymers, i.e., thermoplastic/ductile polymers, is the finest choice. Nanocomposites as a material have integrated nano-sized fragments into their matrix; as a result, when utilizing ductile thermoplastic polymers, it is observed that they significantly improve the properties related to erosion resistance, such as strength, modulus, hardness, toughness, and dimensional stability [3][21][22][23][24].
For specific mechanical and physical applications, the wear resistance of the base material must be identified. The vital parameters in the wear process and their role in various classes of composites and polymers have been highlighted by Barkoula and Karger-Kocsis [3]. The role of filler and/or fiber has been discussed in detail in the literature, and unpredictable results and the complexity of the process are seen in studies on erosion [25]. It has also been revealed that homogeneous mixing and diffusion of nanoparticles, the type and content of the polymer matrix, and the arrangement of the fiber used for the reinforcement of the polymer substrate are the important parameters that control the performance enhancement of nanocomposites. The shape, nature, and amount of fiber are critical parameters for the fabrication of composites and govern their thermal, mechanical, and thermomechanical behavior. Generally, the main factors determining the distribution of the filler are the surface energy of the elements, the matrix–filler compatibility, and the processing methods. The adhesion between surface and matrix is also critical, and it is dependent on the mechanical adherences between the filler matrix and the matrix surface.
Based on a study by Zhang et al. [26], it was concluded that the thickness of the layer of the surface film used as protection changes the wear resistance. For a highly thermally conductive substrate, the study of the protective coating at room temperature proved that erosion declines with growing film thickness. However, for very large film thicknesses, increasing film thickness results in an increase in erosion under certain thermal parameters.
To study erosion resistance and relate it to several mechanical properties of neat materials and their hybrid composites, researchers have carried out effective tests [27]. Deformation brought on by erodents is linked with elevated strain rates of approximately 105–106 s−1; therefore, predicting stress conditions is difficult and correlating mechanical properties with erosion rates is also very complicated. Similarly, it is also tough to foresee their comparative impacts because there is a series of certain mechanisms that encourage the process of erosion. This is concluded based on a literature survey that found all these results in physical effects such as filler breakage/damage, fragmentation, pull-out, denaturing, debonding, etc. In addition, the reliance of the erosion rate of polymer composites on experimental factors is dependent on the wear process [25].