Submitted Successfully!
Thank you for your contribution! You can also upload a video entry related to this topic through the link below:
https://encyclopedia.pub/user/video_add?id=248
Check Note
2000/2000
DNA Damage Response in Autoimmunity
Edit
Upload a video
This entry is adapted from 10.3390/ijms21010055

The DNA damage response and repair (DDR/R) network, a sum of hierarchically structured signaling pathways that recognize and repair DNA damage, and the immune response to endogenous and/or exogenous threats, act synergistically to enhance cellular defence. On the other hand, a deregulated interplay between these systems underlines inflammatory diseases including malignancies and chronic systemic autoimmune diseases, such as systemic lupus erythematosus, systemic sclerosis, and rheumatoid arthritis. Recent data demonstrate accumulation of endogenous DNA damage in peripheral blood mononuclear cells from these patients, which is related to augmented formation of DNA damage and epigenetically regulated functional abnormalities of fundamental DNA repair mechanisms. Since endogenous DNA damage accumulation has serious consequences for cellular health, including genomic instability and enhancement of an aberrant immune response, these results can be exploited for understanding pathogenesis and progression of systemic autoimmune diseases, as well as for the development of new treatments.

The DNA damage response and repair (DDR/R) network is a hierarchically structured mechanism, consisting of sensors, mediators, transducers, and effectors, which recognize any defects during the cell cycle and assign the proper repair process[1]. In case of unrepaired lesions and depending on the extent and type of damage, the cell either passes the mutated genome to its offspring or is neutralized by programmed cell death (apoptosis) or senescence[2]. To compensate for the many types of DNA damage that occur, cells have developed six major DNA repair mechanisms wherein each corrects a different subset of lesions: nucleotide excision repair (NER)[3], base excision repair (BER)[4], mismatch repair (MMR)[5], double-strand breaks repair (DSBs/R)[6], interstrand cross-link repair (ICL/R)[7][7], and direct repair pathway[8].

Recently, the interplay between DDR/R and innate immune response has been suggested. Indeed, accumulating data demonstrate that deregulation of DNA repair mechanisms result in the accumulation of cytosolic single- and double-stranded DNAs that can act as potent immunostimulators through the induction of the cGAS-STING-IRF3 pathway and the production of type I interferon[9][10][11][12][13][14]. On the contrary, loss of immune homeostasis and prolonged inflammatory response can lead to DNA damage and activate the DDR/R network, thus indicating a bi-directional relationship between DDR/R and immune response[2][15][16][17][18][19][20][21]. Interestingly, the presence of DSBs per se has been shown to induce type I IFN production. Treatment of healthy donor-derived primary monocytes with etoposide, mitomycin C or adriamycin, three DSB-inducing drugs, was able to induce type I and III IFNs in primary monocytes and various cell lines, suggesting that DDR-induced IFN expression is a universal mechanism that may underline different pathological processes[11]. Furthermore, basic components of DSB repair were shown to be responsible for the production of cytoplasmic ssDNA, which seems to be the main immunostimulant[22].

Important data supporting that defective DNA repair primes innate immune response comes from ataxia-telangiectasia (AT), a neurodegenerative disorder associated with mutations of the central DNA repair kinase ATM[12]. In summary, ATM deficiency leads to the accumulation of DNA damage, exportation of damaged ssDNA and dsDNA into the cytoplasm, activation of the CGAS-STING pathway, and finally type I IFN production that primed cells for response to exogenous or endogenous stimuli such as viral or bacterial infections (Figure 1). Moreover, Günther and colleagues suggested that defective ribonucleotide removal and accumulation of base lesions and low-grade DNA damage “primed” immune response (ImmR)[23].

Figure 1. Induction of type I IFN expression by endogenous DNA damage. (A) Exogenous and/or endogenous genotoxic agents may lead to the accumulation of DNA damage in the nucleus, followed by exportation of damaged DNA into the cytoplasm and the induction of micronuclei. (B) Damaged cytoplasmic DNA, if it is not cleared by the exonuclease Trex1, activates the cGAS-STING-IRF3 pathway and the production of type I IFN.

The first hint that abnormalities in DDR/R pathway may be involved in the pathogenesis of autoimmunity comes from the increased frequency of polymorphisms of central molecules involved in the DDR/R pathway such as TREX1[24]. Moreover, autoantibodies against components of the DDR pathway have been detected in approximately 10-20% of patients with systemic lupus erythematosus (SLE)[25]. Some known targets of autoantibodies in SLE are the two subunits of Ku protein (Ku70 and Ku80), DNA ligase IV, XRCC4, DNA-PK, PARP, Mre11 and Werner protein[26][27]. Peripheral blood mononuclear cells (PBMCs) from SLE patients display defects in two main DNA repair pathways, namely, NER and DSB repair. SLE patients with nephritis have approximately 3-5 times higher intrinsic DNA damage compared with healthy controls. Of interest, patients with quiescent disease also exhibited increased levels of DNA damage, although lower than patients with nephritis[10]. Recent studies suggest that either dysregulated apoptosis or defects in dead cell clearance contribute to the perpetuation of autoimmunity and SLE pathogenesis. Studies revealed a significantly higher percentage of apoptotic cells in SLE patients than in controls, which was also positively correlated with the number of plasmacytoid dendritic cells, the major type I IFN-a producer[28]. Interestingly, our previous studies have shown that genotoxic drug-induced apoptosis rates were higher in PBMCs from quiescent SLE patients than healthy controls and correlated inversely with DNA repair efficiency, supporting the hypothesis that accumulation of DNA damage contributes to increased apoptosis[9][10]

Oxidative damage has been implicated in the development and perpetuation of systemic sclerosis (SSc)[29]. Indeed, in fibroblasts isolated from the skin of patients with diffuse SSc, levels of ROS and type I collagen are significantly higher and the amounts of free thiol are significantly lower when compared to normal fibroblasts[30]. Moreover, sera from patients with diffuse SSc and lung fibrosis contain elevated levels of advanced oxidation protein products (AOPPs) compared to sera from healthy individuals or from patients with limited SSc and no lung fibrosis[31]. Furthermore, increased DNA damage levels have also been detected in the peripheral blood of patients with SSc, regardless of disease subtype (diffuse or limited SSc) or treatment[32].

The role of oxidative DNA damage and aberrations of the DDR/R network have been long studied in rheumatoid arthritis (RA)[33]. P53 mutations and overexpression were characteristically detected in the synovium of patients with RA[34]. Immunohistochemical analysis of RA synovial tissues revealed compensatory up-regulation of MMR enzymes, especially in the synovial lining, which, however, did not completely invert the observed oxidative damage[35]. Moreover, increased endogenous DNA damage levels in peripheral blood (PBMCs or granulocytes) are observed in patients with RA compared to healthy controls[36][37].

The DDR/R network and the ImmR act synergistically to ensure genomic stability and cell homeostasis, therefore a balance shift in DDR/R may negatively affect ImmR and the opposite may also occur. Guided by this notion, we propose that epigenetically regulated functional abnormalities of DNA repair mechanisms (i.e. downregulation of DDR/R-related genes and condensed chromatin structure that result in defective repair) and increased endogenous DNA damage formation, partly due to the induction of oxidative stress, may result in the augmented accumulation of DNA damage (both SSBs and DSBs) in patients with systemic autoimmune diseases (Figure 2). This accumulation may trigger the induction of apoptosis, which facilitates autoantibody production, as well as the generation of damaged cytosolic DNA and micronuclei that both can act as potent immunostimulators through the induction of the type I IFN pathway, leading to systemic autoimmune disease expression. Notably, some of the components cGAS-STING-IRF3 pathway and the production of type I IFN, leading to systemic autoimmune disease are partially reversible following histone hyperacetylation by HDAC inhibitors.

Recent data have shown that treatment of human SLE-derived PBMCs with the HDACi vorinostat results in hyperacetylation of histone H4, chromatin decondensation, restoration of the DNA repair capacity, and decreased apoptosis rates[10]. These results are in line with previous data, showing that HDACi ameliorate disease in lupus mouse models[38][39][40], and that treatment of lupus-prone Mrl/lpr mice with the HDACi panobinostat significantly reduced circulating naïve B and plasma cell numbers and the levels of autoantibodies[41]. More importantly, in children with systemic-onset juvenile idiopathic arthritis, the HDACi givinostat was found to be safe and beneficial, particularly in reducing the arthritic features, suggesting that HDACi may have important clinical applications in the treatment of systemic autoimmunity[42].

Taken together, the results reviewed herein suggest that the deregulated interplay between DDR/R and ImmR plays a crucial role in the pathogenesis and progression of systemic autoimmune diseases. Thus, unraveling the molecular mechanisms of this interplay can be exploited for understanding pathogenesis and progression of these diseases, as well as to discover new treatment opportunities in the field. 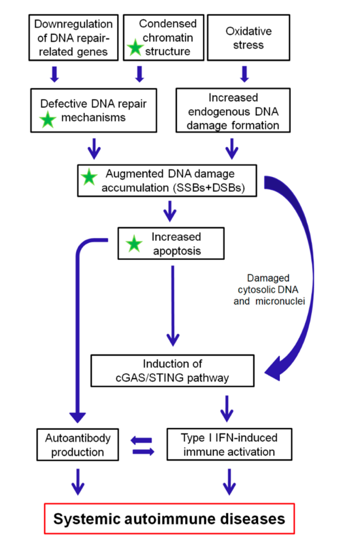 More
© Text is available under the terms and conditions of the Creative Commons Attribution (CC BY) license; additional terms may apply. By using this site, you agree to the Terms and Conditions and Privacy Policy.
Upload a video for this entry
Information
Subjects: Pharmacology & Pharmacy
Contributor MDPI registered users' name will be linked to their SciProfiles pages. To register with us, please refer to https://encyclopedia.pub/register :
Vassilis Souliotis
View Times: 690
Revisions: 3 times (View History)
Update Time: 03 Nov 2020
Table of Contents
1000/1000
Hot Most Recent