Submitted Successfully!
Thank you for your contribution! You can also upload a video entry related to this topic through the link below:
https://encyclopedia.pub/user/video_add?id=24579
Check Note
2000/2000
Water Quality Monitoring System Using LoRaWAN
Edit
Upload a video
This entry is adapted from 10.3390/app12105018

For effective process monitoring and enhanced control in wide areas, reliable and accurate real-time measuring is essential. LoRa, a low-power, wide-area network modulation technology (LPWAN), refers to long-range data communications. LoRa allows for long-range communications of up to three miles or five kilometers in urban areas and up to ten miles or 15 km in rural areas. The ultra-low power requirements of LoRa-based systems are a crucial feature, allowing for the design of battery-operated devices that can last up to 10 years. A star network based on the open LoRaWAN protocol is suitable for an implementation scheme that needs long-range or deep in-building communication.

Numerous scholars worldwide have predicted that Internet of Things (IoT) computing will become a dominant paradigm. The majority of focused research areas are located at the intersections of these three major fields (cloud computing, mobile computing, and the IoT), as well as at the intersections of all three. Several cutting-edge and developing computer concepts are concentrated in such areas. Among these are Mobile Cloud Computing (MCC), cloudlet computing, mobile clouds, fog computing, and edge computing, to name a few [1][2]. LoRaWAN, according to the LoRa Alliance, addresses important Internet of Things (IoT) criteria such as secure bi-directional communication, mobility, and location services. The LoRaWAN standard enables the rollout of IoT applications by providing seamless interoperability among smart items without the need for complicated local installations. Low-power, wide-area networks, according to experts, will account for a large share of the expansion of IoT devices in the next years [3].

LoRa means “remote” and is extended by the LoRa Union remote wireless communication system. This system is designed for equipment powered by batteries with long life spans that are critical to energy consumption [4][5]. The uplink uses a significant amount of data to send the measurement data, while the downlink is primarily used for acknowledgment in many applications [6].

A LoRa network is usually referred to as a “star-like network”, as seen in Figure 1, because it comprises at least three different types of devices. The LoRaWAN network’s basic architecture is as follows: (1) The terminal communicates with the gateway using LoRa and LoRaWAN [7]. The data from the terminal device are sent to the webserver through a high-throughput interface (often 4G, 3G, or Ethernet). (2) The gateway merely serves as a two-way relay or protocol converter, and (3) the network server is in charge of decoding packets received from the terminal and producing packets to be transmitted back to the terminal [8][9]. 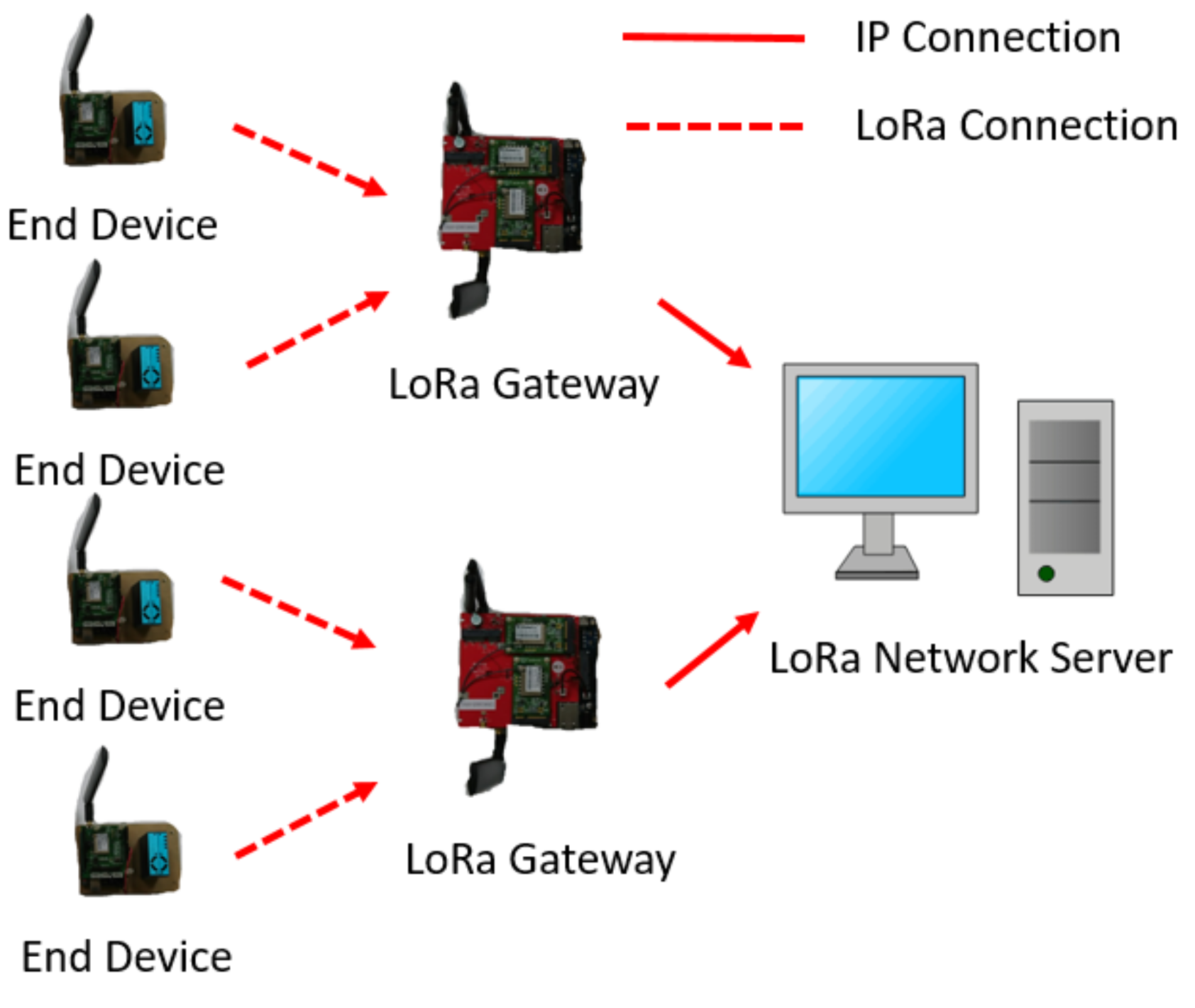 Arduino’s appearance was due to the fact that students of a teacher at a high-tech design school in Italy often complained that a cheap and easy-to-use microprocessor controller could not be found. The teacher, named Massimo Banzi, worked with another teacher, David Cuartielles, and Spanish chip engineer Discuss to design their own circuit boards, and introduced the student, David Mellis, to the circuit board design and development language; they named this circuit board “Arduino” [10][11].
Arduino is an open hardware platform based on the open source spirit, which uses a signle-chip Atmel AVR (Note 1). Its language is the C/C++ language development environment, similar to Java.

IDW is a deterministic multivariate interpolation method that uses a known distributed set of points. A weighted average of the values available at the known points is used to assign values to unknown points. The range of the interpolated values calculates the specified weight. The concept is an unknown value point that is inversely proportional to the value distance of the known point around it; the further the distance, the lower the degree of impact. The degree of impact between the unknown point and the established point is the force of the distance. The formula is presented as follows:
where w(di) is the weight equation, where zi is i of the value’s first known point, and di is i of the distance from the point to the unknown point. The inverse ratio of the power determines the size.

The remote and low-power network of the Internet of Things is an important subject of future urban development. In 2016, Augustine et al. [12] studied and evaluated LoRa, providing an overview of the technology and a detailed examination of its functional components. Field testing and simulation were used to assess the performance of the physical and data link layers. On this basis, some prospective enhancement solutions are given.
Juha Petäjäjärvi et al. [13] tested the performance of the LoRa interior in 2016 at the University of Oulu, where there were more than 570 m northeast of East Asia and 320 m west of the main area using 14 dBm of transmit power and 868 MHz ISM band 12. Of the maximum spreading factor, the entire campus area can be covered. The measured packet delivery rate was 96.7%, with no acknowledgment or retransmission.
In 2014, Andrea Zanella et al. [14] produced the Smart City website, a thorough summary of urban Internet technologies, protocols, and architectures, as well as technical solutions and best practice guidelines, centered on the City Internet of Things system.
M. Lauridsen et al. [15], published in March 2017, focus on LoRa and SigFox of the Interference in the European 868 MHz ISM Band with five different locations, which is referred to as the LoRa 868 MHz ISM band interference test: point out shopping, commercial parks, hospital complexes, industrial areas, and residential areas, where RFID interrogator signals occupied the 865–868 MHz band and which may prevent LoRa and SigFox deployments. Channels need to be switched to avoid this problem.
Bhardwaj et al. [16] designed and implemented Cloud-WBAN, an experimental framework that not only brings the cloud computing system closer to the WBANs user (edge-of-things computing) but also automatically adjusts the computing resources (at cloudlet) to maintain the WBANs users’ service level agreements (SLAs) based on the volume and type of sensory data. The efficacy of the suggested strategy is assessed, and the experimental findings demonstrate that when compared to other methods, the proposed approach increases resource utilization by at least 26% and reaction time by at least 49%. In addition, Bhardwaj et al. [17] present a new elasticity controller that combines fuzzy logic control with autonomic computing for autonomic resource provisioning. This controller calculates the needed number of processor cores based on the internal workload of the program and the virtual machine’s resource consumption. In comparison to existing methods, the suggested methodology reduces the finishing time by up to 64% and boosts resource usage by up to 36%, according to the test results.
D. M. Hernandez et al. [18] published an energy and coverage study of a LPWANs schemes for Industry 4.0 in May 2017, which mentions that low-power broadband networks (LPWAN) are becoming one of the major components of the Industrial Internet of Things (IIoT). The combination of network topology could cover large urban areas similar to the indoor environment when using energy-efficient transmission.
T. Peter et al. [19] published the performance and analysis of LoRa in September 2016. LoRa technology offers excellent outdoor coverage results in urban or rural areas, with very low frame losses (about 3%) under optimal conditions. Water quality must be continuously monitored before it is released into the environment. Kamidi et al. [20] use an Arduino UNO R3 to capture water quality data. The parameter is then sent through WiFi via the 8266 module. Data were collected and processed with Spark MLlib using a Deep Learning model. If the parameter exceeded a previously determined threshold, an SMS alert was sent. The SMART-WATER infrastructures technology allows for the tracking and control of water consumption via websites [21]. To send logging data, they use a variety of communication protocols. The LoRa and wMBus wireless protocols are used to communicate with terminal devices, and NB-IoT and GSM cellular are used to connect them to the cloud [22], a suggested method for providing real-time data for smart cities based on IoT and Wireless Sensor Network. The current method relies solely on wireless technology, which is limited in range and consumes more power. They switched to LoRaWAN, which allowed them to cover a greater distance than Wi-Fi. Gangwani et al. [23] proposed IOTA, a new distributed ledger system for the Internet of Things. It is based on a directed acyclic graph. IOTA circumvents the blockchain’s present restrictions by providing a data communication protocol called masked authenticated messaging that enables safe data sharing between Internet of Things (IoT) devices.