+1 point
Thank you for your contribution! You can also upload a video entry related to this topic through the link below: https://encyclopedia.pub/user/video_add?id=24529
Check Note
2000/2000
Smart Cities and Financial Sustainability

Smart city initiatives have become recurrent strategies used by local governments to provide better services, improve their managerial effectiveness, and increase citizen participation in cities’ decision-making processes. Great potential exists to use data, information, and communication technologies (ICT) more extensively to improve city operations. However, depending on the size and financial situation of the cities, some smart city initiatives could be considered investments that are too expensive and not easy to maintain in the long term. If city governments want to achieve most of the benefits arising from the intense use of technology and data, building financially sustainable smart cities should be seen as a priority.

The literature on smart cities includes different definitions of sustainability. The first definitions of sustainability referred almost exclusively to the conditions of equilibrium between human activities and their impact on the natural environment [1]; today, the term refers more broadly to the duration of the effects derived from the smart city initiative over time [2] and the long-term impacts of this type of project on the environmental, social, political, and economic aspects of a city [3][4]. However, the financial sustainability (FS) aspect of smart cities has been neglected and requires more investigation, particularly in relation to the long-term impact of these types of projects.
An example of this increasing concern about the FS of smart cities is the European Commission’s initiative, entitled “European Innovation Partnership on Smart Cities and Communities” (EIP-SCC). This initiative attempts to build a joint investment program for European smart city projects by involving investors, city governments and other public agencies, small- and medium-sized enterprises, and other actors from society in discussing and finding financially sustainable solutions (for more information, see: https://eu-smartcities.eu/sites/default/files/2018-06/EIP-SCC_TOWARDS%20A%20JOINT%20INVESTMENT-Paper.pdf (accessed on 12 May 2020)). This project also attempts to identify new market and business models for financing infrastructure and services for smart cities in a sustainable way over time (e.g., crowdfunding, community investment, and the digital social market). A set of indicators and measurements are used to guide funding toward the more financially sustainable and viable smart city initiatives.
The assessment of smart cities’ FS takes into consideration not only how local governments perform over time when adopting this type of initiative but also how economic and social contexts may influence their adoption in general [5][6], as well as how these contextual factors may influence investments and spending on an ICT infrastructure in particular [7][8]. Several international organizations have proposed the adoption of FS strategies and policies in the public sector as a form of collective monitoring tool for strengthening financial discipline and preventing financial and economic crises [6][9][10][11][12][13], but the application of an FS framework for local or municipal governments that are adopting large and enduring ICT projects, such as smart city initiatives, is still a work in progress.

Many definitions of a smart city and its components exist. The term “smart city” encompasses a collection of diverse technological developments used to improve cities, through specific tools and applications approaching the topic from a holistic viewpoint [14][15]. Batty [16] (pp. 483–484) pointed out that smart city projects are spaces where ICTs have merged with traditional infrastructures, coordinating and integrating the use of new digital technologies to transform the environment toward a new urban model.
Smart city initiatives require collaborative efforts across multiple levels and functions of government authorities, businesses, citizens, and other actors to improve the quality of life of its inhabitants [17][18]. Therefore, smart city projects attempt to adopt a holistic approach including several dimensions or axes of development [19][20][21][22]. Six main axes guide smart city initiatives around the world: smartness for the economy, people, governance, mobility, environment, and living [23]. A smart city must develop each axis as an aspiration goal toward continuous improvement. These axes represent a global vision of all aspects of a connected society within the urban space in the future from a more holistic perspective [14]. Whatever the goals established for a smart city initiative, it requires critical investments and budget allocations to acquire the necessary resources, such as people, materials, and ICTs for implementing this type of holistic project.
In addition to data and ICT, there are other important components for smart city projects related to organizational capabilities, policies, and the context in which the smart city initiative is embedded [4][24]. In fact, there are definitions of “smart city” that include the roles of governments, citizens, businesses, and other important social actors in this type of project [25][26][27][28]. In addition to data, technology, and the built infrastructure, smart city initiatives include aspects related to the environment, policies, services, openness to citizen participation, and partnerships with private and nonprofit organizations [29][30]. Important aspects of government policies include investment, spending, and the allocation of key resources.
Smart city research also emphasizes the environmental aspect of sustainability [1][29][31]. The rapid adoption of mobile and sensor technologies, as well as the diversity of Internet applications and social media available, extended the scope of smart city projects to saving energy, supporting environmental care, or improving urban mobility [32]. Many modern urban sites have taken advantage of emerging technologies, extending the concept of sustainability into other dimensions, such as improving living conditions and citizen engagement [33][34]. More broadly, the term “sustainability” has also been identified as the ultimate test of a smart city’s strategy for success from a more integral and systematic perspective, in terms of the duration of its results over time [2]. It evaluates outcomes over time, not only focusing on technical or environmental changes but also on a broader perspective of results (e.g., financial health or social justice). Consistently, sustainability now refers to long-term impacts on the environmental, social, political, and economic aspects of a smart city [3][4][35].
Environmental sustainability represents an essential component of the smart city conceptualization. Protecting the environment is recognized as one of the most important characteristics of smartness [33]. However, as mentioned before, other types of sustainability exist, such as social, political, economic, and financial sustainability [36]. Social sustainability refers to a future focus on the improvement of a just society over time [37]. As Castillo, Price, Moobela, and Mathur [38] (p. 39) noted, social sustainability can be defined as “ensuring the well-being of current and future generations, by recognizing people’s right to belong to and participate as valued members of a community.” Economic sustainability focuses on the uneven distribution of the benefits of digital innovation among citizens and the efficiency of technology in practice [39][40]. Political sustainability positions smartness as a mechanism for reconciling conflicting policy ideals and agendas in urban policymaking, regarding mutually recognized problems and solutions, among different stakeholders [41]. Finally, FS refers to a set of criteria to identify how smart city projects affect the finances of governments and citizens in the long term [42]. FS could also be seen as the ability of a local government to meet its financial and service obligations after investing in smart city projects [43].
Today, the use of the term “sustainability” often includes various strategies to improve the use of public infrastructure, engage citizens in local governance, save energy, foster economic growth, attract business and innovation, protect the environment, and help government officials to learn and innovate [25][44]. The emphasis on sustainability has represented an essential feature in the implementation of several examples of smart city initiatives around the world. Furthermore, several international certification bodies have proposed relevant standards for smart city initiatives, in order to characterize an appropriate set of properties for this type of project. The International Electrotechnical Commission (IEC), the International Telecommunication Union (ITU), and the International Organization for Standardization (ISO) have collaborated to create a uniform set of rules, standards of good practice, and technical cooperation mechanisms around the concept of the smart city. Many of them constitute an international consensus on best practices for smart cities from the holistic viewpoint of sustainable cities and communities (for examples of these reviews, please see [45][46][47]). This is a list of some of the most well-known standards that are specifically applicable to smart cities:
These ISO standards complement each other and others dedicated to energy efficiency and savings, transport (traffic safety), water efficiency management systems related to drinking water and wastewater services, public infrastructure, security and resilience in the case of disaster and emergencies, healthcare, and decent standards of living, among others. Several studies have compared and articulated this family of ISO standards and indicators for smart sustainable cities (see Figure 1) [45][46][47].

Figure 1. The family of ISO standards for the smart city. Source: authors’ own elaboration, based on [45][46][47].
The association between actions and results in each of these dimensions and indicators is particularly important due to the financial spending and investments in smart city initiatives from a city’s budget. Understanding how financially sustainable the portfolio of smart city initiatives is over time becomes an essential task for city officials and the city’s citizens [33]. As such, this research focuses on the budgetary and financial dimensions of sustainability as they are crucial for smart city initiatives. The following section explains FS in more detail and why it should be seen as an essential tool by which to assess smart city success. It also presents a financial framework that could help city governments to better assess the FS of their initiatives, considering the financial condition of the government, smart city operation over time, ICT infrastructure, and contextual indicators that are compatible with the dimensions and indicators for smart cities from the family of ISO standards.

Assessing the financial condition of governments has become an important topic due to several economic and financial crises in the 1970s, 1980s, in 2008, along with the ongoing crisis that started in 2020 as a result of the COVID-19 pandemic [48][49][50]. The term “financial sustainability” is related to the assessment of the financial condition, fiscal health, fiscal stress, and/or financial performance of a government over time, considered within a complex context [5]. It refers to the ability of a government to meet its financial and service obligations from a systematic perspective, wherein public finances are embedded within complex economic, political, and social contexts [49][51]. It also represents the ability of a government to interact with this context in order to meet present and future financial commitments and achieve an effective service delivery without incurring excessive debt, engaging in budget gimmicks, or using evasive tactics [6] (p. 3962) [52] (p. 7) [53] (pp. 1–2). Analyzing FS from a systematic perspective means, for example, identifying the potential risks from the economic and social contexts and adapting fiscal, budgetary, and debt policies according to that government’s context. This type of FS assessment is known as the systemic perspective of the financial condition of governments because it embeds financial condition in its social, economic, and political contexts. The FS framework adopts a systemic perspective within three spheres (see Figure 2): (1) the financial condition of a government, (2) its environment, which includes economic, political, demographic, social, budgeting, accounting, spending needs, revenue wealth, and ICT aspects, among others, and (3) the interactions between the first two spheres over time [49][51]. 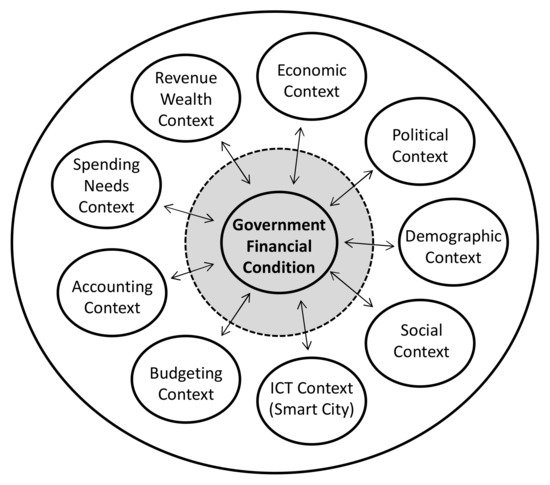 More
© Text is available under the terms and conditions of the Creative Commons Attribution (CC BY) license; additional terms may apply. By using this site, you agree to the Terms and Conditions and Privacy Policy.
Upload a video for this entry
Information
Subjects: Business, Finance; Green & Sustainable Science & Technology; Computer Science, Information Systems
Contributors MDPI registered users' name will be linked to their SciProfiles pages. To register with us, please refer to https://encyclopedia.pub/register :
Gabriel Puron-Cid
,
J. Ramon Gil-Garcia
View Times: 287
Revisions: 2 times (View History)
Update Date: 28 Jun 2022
Table of Contents
1000/1000
Hot Most Recent