+1 point
Thank you for your contribution! You can also upload a video entry related to this topic through the link below: https://encyclopedia.pub/user/video_add?id=24073
Check Note
2000/2000
Chloride-Induced Corrosion of Carbon Steel in Cracked Concrete

Corrosion is an electrochemical reaction consisting of anodic and cathodic half-cell reactions. Micro-cell corrosion refers to the situation where active dissolution and the corresponding cathodic half-cell reaction occur in adjacent parts of the same metal. For a steel reinforcing bar in concrete, the surface of the corroding steel can act as a mixed electrode containing both anode and cathode regions connected by the bar itself. Macro-cell corrosion can also form on a single bar exposed to different environments within the concrete or where part of the bar extends outside the concrete. In both cases, the concrete pore solution functions as an electrolyte.

Cracking in reinforced concrete structures occurs due to diverse and complex processes such as physical loads, creep and shrinkage, and thermal stress. Cracks form when the summation of tensile stresses exceeds the concrete tensile strength. According to ACI committee 224, cracking can be classified into two main categories based on the time of the crack occurrence, i.e., cracks occurring before concrete hardening (plastic stage) or after concrete hardening, as shown in Figure 1 [1]. The cracking phenomena can be further subdivided. For example, cracking due to applied loads can be characterized as flexural, shear, or torsional cracks. Cracking can also be characterized by size, location, and severity. Internal microcracking, or non-structural cracks, result from the intrinsic properties of concrete and its ingredients [2]. 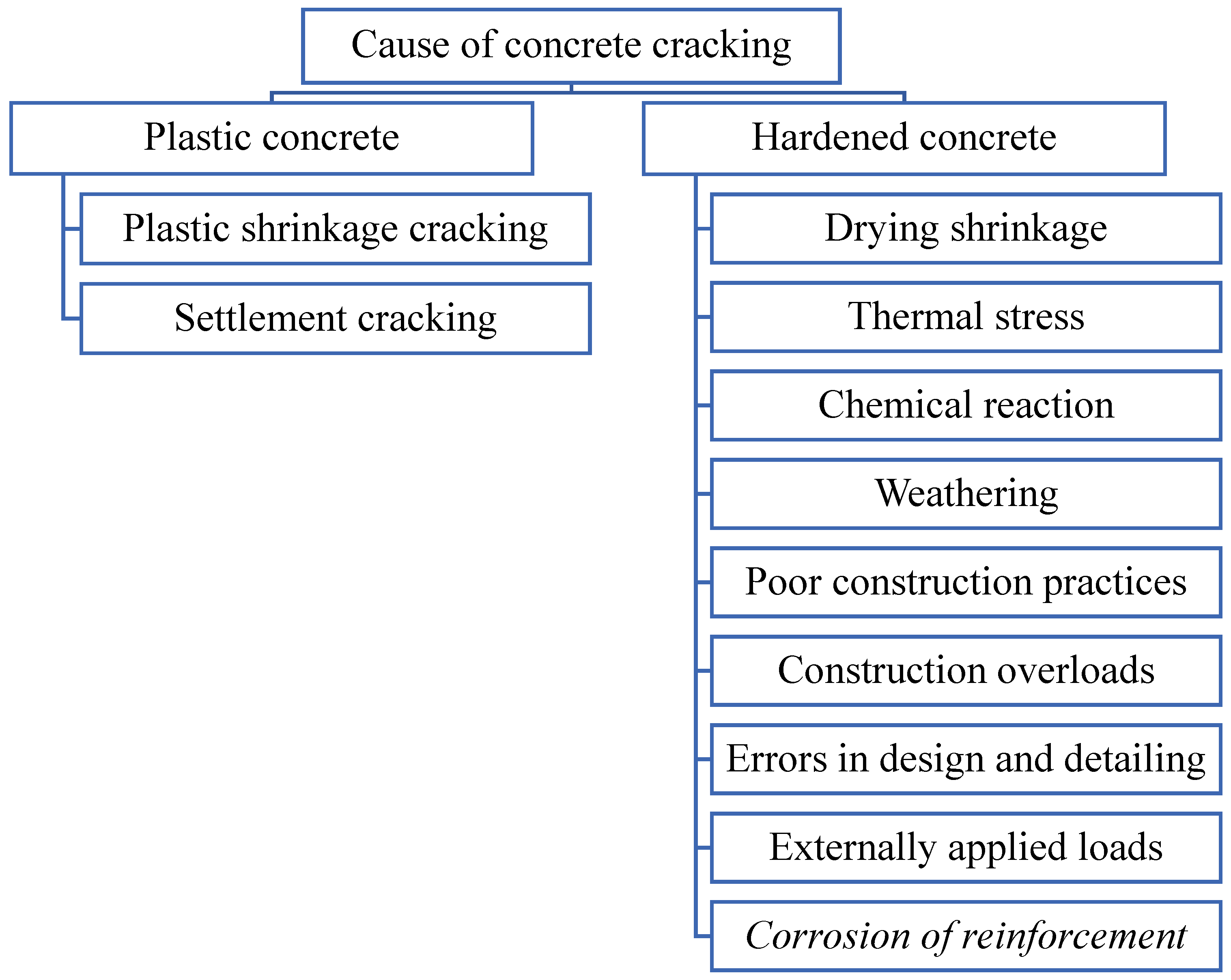 The term “allowable crack width” denotes the range of maximum crack widths acceptable in reinforced concrete members, which should not impair durability or serviceability. “Crack control” includes actions taken during design to limit the quantity and size of cracking and to keep cracks within allowable limits. Even though proper mix design, placement, and curing can prevent or minimize the occurrence of many types of cracks listed previously, concrete cracking is still inevitable during the life span of reinforced concrete structures. Therefore, many building and construction codes include a range of crack limits based on the severity of the exposure conditions and the type of the structure. The crack widths are defined at the surface of the concrete structure under the quasi-permanent load combination. It should be noted that these values are for reinforced concrete, not for pre-stressed concrete.
These guidelines can be used to select reinforcement details to control cracks during the design stage. The guidelines can also be used as thresholds for evaluating concrete cracking in existing structures. There is no consensus regarding the maximum crack widths. For example, the maximum allowable crack width in reinforced concrete members exposed to deicing chemicals is 0.18 mm by ACI Committee 224 and 0.3 mm by Eurocode 2. Two additional points are important regarding allowable crack widths. First, crack widths can change over time, and second, these crack width values are not always a reliable indication of the occurrence of corrosion and deterioration [1]. Thus, these limitations are helpful guidelines and starting points but are not hard and fast rules.

3.1. Effects of Cracks on Chloride Ingress

It can be seen that a wide variety of results have been achieved regarding the effects of cracks on chloride penetration. One trend in the referenced studies is that chloride penetration is a function of the crack width unless the cracks are very small (no access to chloride through cracks), very large (free access of chlorides through cracks), or in between; increased accessibility develops with increasing crack width. There is no clear consensus on the impact of crack width.

The influence of concrete cracking on reinforcement corrosion could be a function of the frequency of cracks (number of cracks per a specific length), crack direction compared to the reinforcement, crack width, and crack length.

Arya and Ofori-Darko conducted a study on 28 135 mm × 100 mm × 1360 mm steel-reinforced concrete beams containing 0, 1, 4, 8, 12, 16, and 20 parallel cracks per meter, with a water-to-cement ratio and concrete cover of 0.65 and 42 mm, respectively [3]. The total sum of the crack widths of each cracked beam was 2.4 mm, i.e., some beam specimens had fewer but wider cracks and others had more but narrower cracks. Beams were sprayed with a 3% NaCl solution for 24 months. The results of all cracked beams, except the one with 20 cracks, showed an increase in the weight loss of the embedded reinforcement with the increase in crack frequency. In the case of the beam with 20 cracks, it was suggested that the cracks were undergoing a self-healing process. The authors hypothesized that the corrosion of the reinforcing steel might be effectively controlled by limiting the number of cracks rather than limiting the surface crack widths.
On the contrary, in the study by Schiessl and Raupach, the opposite behavior was observed where the corrosion rate decreased as the spacing between the cracks decreased (i.e., frequency of cracks increased) [4]. They also reported that the corrosion rate doubled as the crack frequency decreased by half. They suggest that increasing crack quantity resulted in more anodic points and fewer cathodic areas between cracks.
In another study by Blagojević, the corrosion of the embedded steel in cracked concrete beams with different concrete covers of 20, 30, and 40 mm was investigated [5]. The beams with 20 mm, 30 mm, and 40 mm of concrete cover had 9, 8, and 6 active cracks, respectively, with a mean crack width of 0.15 mm for each beam. The results showed that the corrosion of the reinforcement tended to decrease when the crack frequency decreased and the concrete cover increased. It was concluded that the frequency of cracks was a function of concrete cover; therefore, the crack frequency was considered a secondary parameter in steel corrosion.
As can be seen, there is no clear answer regarding the relationship between the crack frequency and the corrosion rate. It appears that corrosion is affected by many interacting variables, including crack frequency and concrete cover.

More
© Text is available under the terms and conditions of the Creative Commons Attribution (CC BY) license; additional terms may apply. By using this site, you agree to the Terms and Conditions and Privacy Policy.
Upload a video for this entry
Information
Subjects: Metallurgy & Metallurgical Engineering
Contributors MDPI registered users' name will be linked to their SciProfiles pages. To register with us, please refer to https://encyclopedia.pub/register :
Amir Poursaee
,
Brandon Ross
View Times: 94
Revisions: 2 times (View History)
Update Date: 16 Jun 2022
Table of Contents
1000/1000
Hot Most Recent