+1 point
Thank you for your contribution! You can also upload a video entry related to this topic through the link below: https://encyclopedia.pub/user/video_add?id=24031
Check Note
2000/2000
Ultra-Processed Food Consumption and Risk of Diabetes Mellitus

Ultra-processed foods (UPFs) are products that have undergone a series of industrial processes, including physical, biological, or chemical processes, coupled with the use of additives such as colorings, emulsifiers, and preservatives. UPF consumption has grown dramatically over the last few decades worldwide. This growth is accompanied by the increasing prevalence of non-communicable diseases (NCDs) such as cardiovascular diseases, hypertension, and type 2 diabetes. UPFs represent three main health concerns: (i) they are generally high in non-nutritive compounds such as sugars, sodium, and trans fat and low in nutritional compounds such as proteins and fibers, (ii) they contain different types of additives that may cause severe health issues, and (iii) they are presented in packages made of synthetic materials that may also cause undesirable health side-effects.

In recent decades, dramatic growth in the consumption of ultra-processed foods (UPFs) has been reported worldwide. The United States (US) and the United Kingdom (UK) reported the highest consumption ratios, accounting for more than half of the total calories consumed. In contrast, Italy reported the lowest, which accounted for almost 10% of the total calories consumed. Other regions, such as Australia, had an average of 40%. Asian countries such as Korea, Japan, Malaysia, and Indonesia had an average of 25.8%, 28.2%, 29%, and 19.5%, respectively, and for Middle Eastern countries, a Lebanese study reported an average of 36.5% of the total calories consumed [1]. UPFs are becoming more present in all food categories, even in infants’, children’s, and adolescents’ diets [2]. This global phenomenon is accompanied by an increase in the prevalence of overweight/obesity, metabolic syndrome, and other non-communicable diseases (NCDs) such as cardiovascular diseases, hypertension, and type 2 diabetes (T2D) [3]. UPFs are characteristically poor in nutritional compounds and high in non-nutritive components [3][4][8]. The use of several additives may also cause multiple health issues, and the packaging may also contain harmful substances [5]. These health concerns are questionable if they could be associated with the rapid increase in the prevalence of diabetes.

2. An Overview of Ultra-Processed Foods

Nowadays, almost all available food products are processed; the processing techniques are not the issue. Multiple conventional and other relatively novel processes such as drying, non-alcoholic fermentation, freezing, pasteurization, and vacuum-packing are beneficial for either human health or preserving foods. The issue is with the term “ultra-processed”, which reflects the series of industrial processes that have been undergone [9]. Multiple food classification systems have been designed to characterize foods according to processing criteria. In 2010, Monteiro and colleagues [10] established a system known as “NOVA”. Since then, it has become the most widely used system in the research field [2][5][11].
NOVA classifies foods based on the degree and purpose of industrialized processing into four categories (Figure 1): (i) unprocessed/minimally processed foods, (ii) processed culinary ingredients, (iii) processed foods, and (iv) ultra-processed foods [12]. The latter, ultra-processed foods (UPFs), are products that have been manufactured by different types of industrial processes, including physical, biological, or chemical processes, such as hydrogenation, extrusion, and pre-frying, coupled with the use of “cosmetic additives” such as colorings, flavorings, sweeteners, and emulsifiers [4][5][6]. Cosmetic additives are low-cost ingredients that have rarely or never been used in kitchens. The presence of at least one cosmetic additive in any product’s ingredients list, which by law must be included in food labels, identifies it as ultra-processed [12]. These additives are applied in the food industry to provide long-shelf-life products that are more convenient, hyper-palatable, and affordable to consumers with the least economic costs and maximum profit [3][5]. 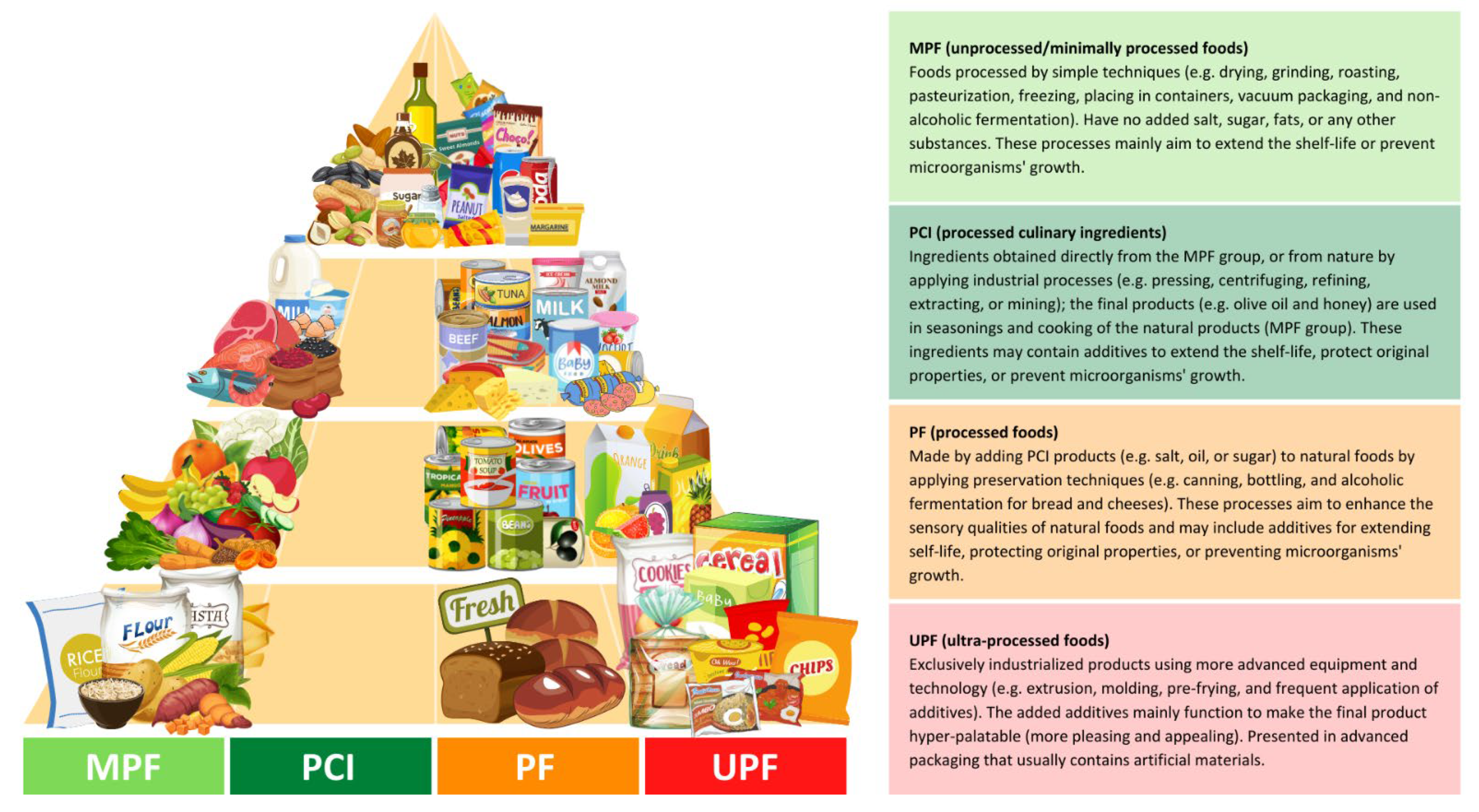 Figure 1. Distributed food examples in the food pyramid based on the NOVA classification, according to the given criteria by Monteiro et al. [12]. The different colors (light green, green, orange, and red) represent the degree of the processing; green colors (MPF and PCI) have the least level of industrial processing, orange (PF) has a modest level, and red (UPF) has the most extensive level.
UPFs are products mainly characterized by poor nutritional value as they are extremely high in non-recommended nutrients (e.g., free sugars, sodium, saturated and trans fats) that are linked to the risk of multiple NCDs such as cardiovascular diseases, cancer, and T2D, and are low in dietary fiber, proteins, and potassium. They also tend to contain highly refined grains and low levels of several bioactive components [3][4][8]. In an Australian cross-sectional study [13], UPF products were found to contain 4.7, 2.9, and 1.9 times more free sugars, sodium, and energy density, respectively, and 1.7 and 1.4 times less potassium and fiber, respectively, than non-ultra-processed products. Increased intake of these non-recommended nutrients was in a statistically significant linear relationship (p < 0.001) with the increase in UPF consumption. From the lowest UPF consumption ratio to the highest, the proportions of free sugars, trans fats, and energy density increased remarkably from 22% to 82%, 6% to 11%, and 2% to 25%, respectively.
Consistently, participants who consumed the highest level of UPF (contributing to an average of 74.5% of total energy intake (TEI)) had exceeded their upper limits of recommended intakes of free sugars, saturated fats, and sodium compared to those who consumed the lowest levels (average UPF, 12.8% of TEI). In addition, over 85% of them did not meet their recommended intakes of dietary fiber and potassium. Similarly, a British cross-sectional [14] study also found a significant relationship between increased intake of UPFs and an increase in carbohydrates, free sugars, total fats, saturated fats, and sodium intake, while the intake of proteins, fibers, and potassium showed a decrease. From the least UPF consumption ratio up to the highest, total energy intake derived from free sugar intake increased from 9.9% to 15.4%, and that derived from dietary fiber intake decreased from 8.36% to 6.86%. A positive association between UPF consumption and increased intake of non-recommended nutrients has also been reported in other studies [15][16][17].
Beyond the poor nutritional value, the cosmetic additives used in this industry may cause multiple health issues. Some additives such as monosodium glutamate (a flavor enhancer), carrageenan (a thinking agent), soya lecithin (an emulsifier), and sucralose or aspartame (non-nutritive sweeteners) are widely used in the food industry [2][5][12]. However, they might be associated with multiple health risks, including diabetes. Consumption of monosodium glutamate, for example, has been suggested as a potential factor in the development of obesity and diabetes, as well as other side effects such as hepatotoxic, neurotoxic, and genotoxic effects [18]. Monosodium glutamate may increase oxidative stress due to elevated lipid peroxidation; a dose of 4 g/kg of body weight was orally administrated to mice for only seven days and significantly showed an increase in lipid peroxidation [19]. Similar results were found in a recent investigation; after eight weeks of administration, a dose of 2.5 g/kg of body weight significantly caused oxidative stress in rat modules [20]. Another study showed that a dose of 0.75 g/kg of body weight could induce diabetes in rat modules due to elevated fasting blood glucose levels [21]. Carrageenan might also be associated with the development of diabetes; it was shown in an in vivo and in vitro investigation that exposure to carrageenan led to an impairment in glucose intolerance and a rise in both insulin resistance and insulin signaling [22]. Sucralose was also associated with elevating glucose and insulin levels and slowing down the clearance of insulin from the plasma of obese individuals [23].
Furthermore, the packaging of UPFs doubles these concerns, as they are made of different kinds of synthetic chemicals, and their safety has been questioned recently. Chemicals such as bisphenols and phthalates are commonly used in food plastic packaging [5][24]. An analog of bisphenols, bisphenol A (BPA), has been banned in many countries due to its harmful effects on multiple health issues such as cardiometabolic disorders and cancer. However, it has been replaced by another bisphenol analog, bisphenol S (BPS), indicated as a “regrettable substitution”.

Concerns surrounding UPFs have attracted researchers’ interest all over the world; several studies in different populations and settings have found an association between elevated intake of UPFs and all-cause mortality and many other different specific health outcomes such as cardiovascular disease, hypertension, overall cancer, depression, metabolic syndrome, overweight and obesity, and gestational obesity [4]. The risk of all-cause mortality has been reported to increase by 62% with the high UPF consumption; with each additional serving of UPF products, the risk increased by 18% [16]. An increased risk of cardiovascular disease by 11% [25] and overall cancer by 10% [26] has been reported with each 10% increase in UPF intake. The results remained significant even after further adjustment of several nutritional quality markers. Among adult individuals followed up for a median of 10.3 years, higher UPF consumption was reported to increase the risk of developing depression by 31% [27]. The risk of developing metabolic syndrome has significantly increased by 28%, with high UPF consumption contributing to an average of ≥71% of TEI [15]. Results showed a statistically significant association between high UPF consumption, elevated waist circumference, and reduced high-density lipoprotein (HDL) cholesterol levels. An increase in the risk of obesity by 31% was reported, with an average UPF consumption contributing to 73% of TEI [28]. A recent systematic review reported that high UPF consumption correlates linearly with elevated body mass index (BMI) [7]. Several studies had reported similar significant results [16][17][29]; elevated BMI levels were observed among individuals consuming a high level of UPF. Obesity, as well established for decades, is a major leading cause of the development of T2D [30]. Indeed, higher BMI levels above 29 kg/m2 were linked to the development of T2D by 10 times more than normal levels [30]. Higher UPF consumption can also increase fasting blood glucose, insulin, and the homeostatic model assessment for insulin resistance (Homa-IR).

4. Ultra-Processed Foods and Risk of Diabetes

More
© Text is available under the terms and conditions of the Creative Commons Attribution (CC BY) license; additional terms may apply. By using this site, you agree to the Terms and Conditions and Privacy Policy.
Upload a video for this entry
Information
Subjects: Others
Contributors MDPI registered users' name will be linked to their SciProfiles pages. To register with us, please refer to https://encyclopedia.pub/register :
Muneerh I Almarshad
,
Raya Algonaiman
,
Hend F Alharbi
,
Mona S. Almujaydil
,
Hassan Barakat
View Times: 352
Revisions: 6 times (View History)
Update Date: 15 Jun 2022
Table of Contents
1000/1000
Hot Most Recent