+1 point
Thank you for your contribution! You can also upload a video entry related to this topic through the link below: https://encyclopedia.pub/user/video_add?id=23966
Check Note
2000/2000
6G Cellular Networks

There are continued advances in the internet and communication fields regarding the deployment of 5G-based applications. It is expected that by 2030, 6G applications will emerge as a continued evolution of the mobile network. Blockchain technology is one of the leading supporting technologies predicted to provide a secure and unique network to 6G-enabled devices, transactions, and applications. It is anticipated that the 6G mobile networks will be virtualized, have cloud-based systems, and aim to be the foundation for the Internet of Everything.

With the research community involved in discussing possibilities and opportunities that may be opened up with the materialization of 6G technology, most countries in the world are still caught up in the deployment of the 5G technology. However, it is hypothesized by most researchers that 5G and Beyond 5G (B5G) technologies, once fully deployed, will be capable of enabling the Internet of Everything (IoE) to truly take off [1][2], leading to justifying the massive demands for 6G. The sixth generation of wireless technology (6G) will focus on communication between connected machines, i.e., thing-to-thing connection instead of people-to-people links in 1G-4G and people-to-thing communication as in the focus of 5G, as represented in Figure 1.

Figure 1. Evolution of Internet.
In the past, a new wireless communication standard emerged after around a decade, and given this trend, it is expected that we would be witnessing 6G around 2030 [3][4][5]. As more and more users are connecting to the internet and using a large number of devices connected to the Internet, big changes and challenges are coming up for internet research. The research communities are already looking towards solutions to the challenges posed by 5G mobile communication. It is expected that many of these challenges will be addressed by the time 6G materializes [6][7]. 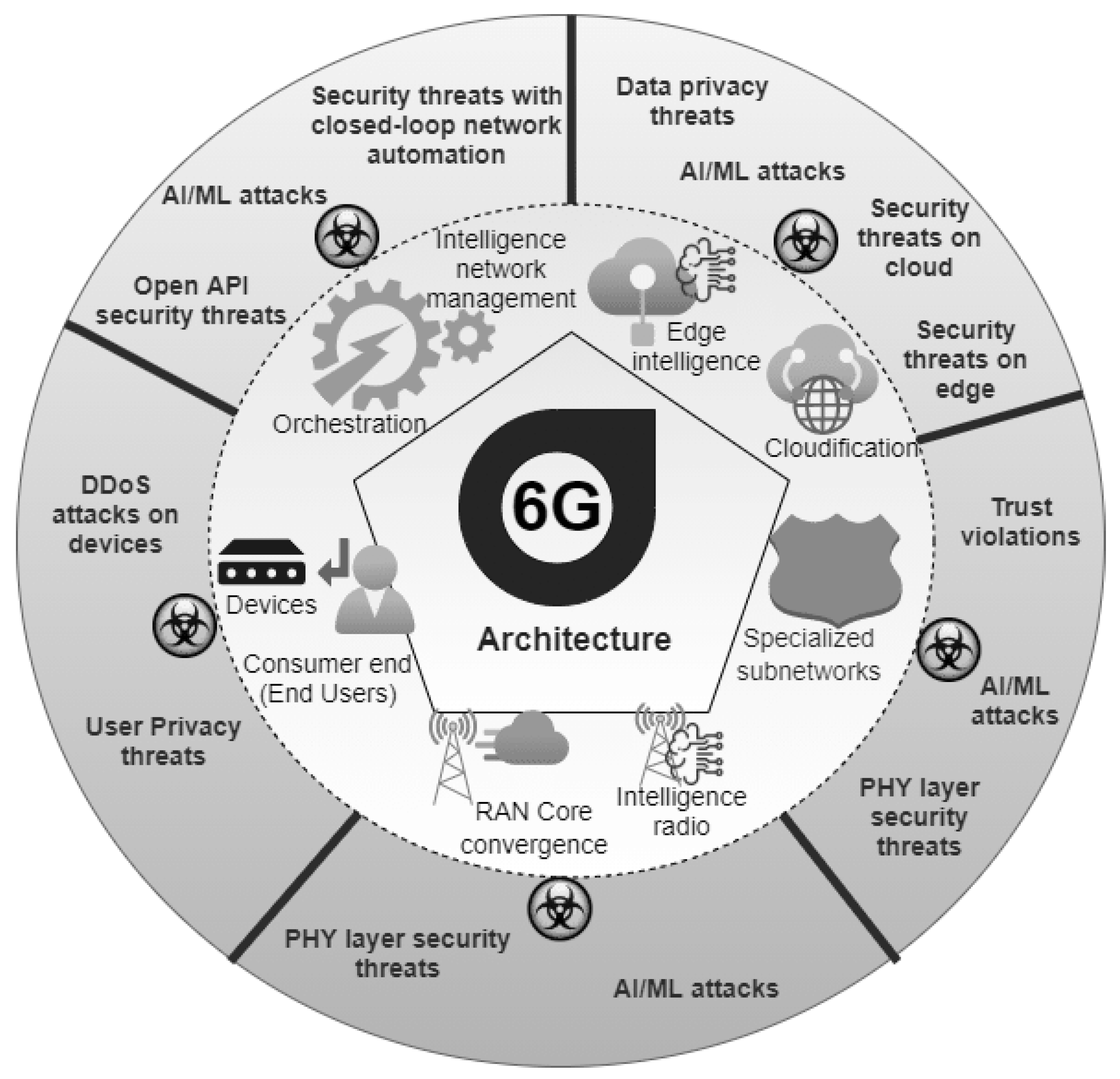 2.1. What Is Blockchain Technology?

Blockchain technology can be claimed to be the most-hyped innovation of the 21st century that was designed to support bitcoin but now powers many business applications and is hyped to be the leading technology for the support of 6G technologies [8][9][10]. Advancements in blockchains are still young and hold the promise of a bright future [11][12][13]. The blockchains can be defined as a digital ledger of transactions (DLT), a database that can store encrypted transaction data in chronological order and chain the data together in the form of blocks [14][15]. Blockchain is used to define a structure of data that can be described as an ordered arrangement of blocks, where each of the blocks contains a small list of transactions and each of the blocks is chained together [16][17][18]. Through these chains, each component of the data can be traced to its source; however, the blockchains cannot be altered, deleted, or replaced without invalidation of the hash chain [16]. Blockchain technology has extensive applications in payment systems and other digital financial or Fintech solutions. Thus, this technology requires strict authentication protocol for managing the safety of the users and transactions [19][20].

2.2. How does Blockchain Work?

This technology, therefore, enables safe transactions between individuals without the fear of government, bank, or other third-party software snooping and stealing the data [21][22]. Figure 3 maps out roughly how a blockchain works; first, an individual node in a peer network requests a transaction, which is then broadcasted to a P2P network of nodes that authenticates it by verification technique and combines it to other transactions to form an encrypted block of data which is added to an existing blockchain [23][24]. Blockchains can be considered, therefore, as a promising and revolutionary technology for future developments of applications in the 6G network era as it can help in reducing the risks, stamps out frauds, and brings multilayer transparency in any transactions between two nodes in a scalable way, opening up a myriad of application scope and uses. 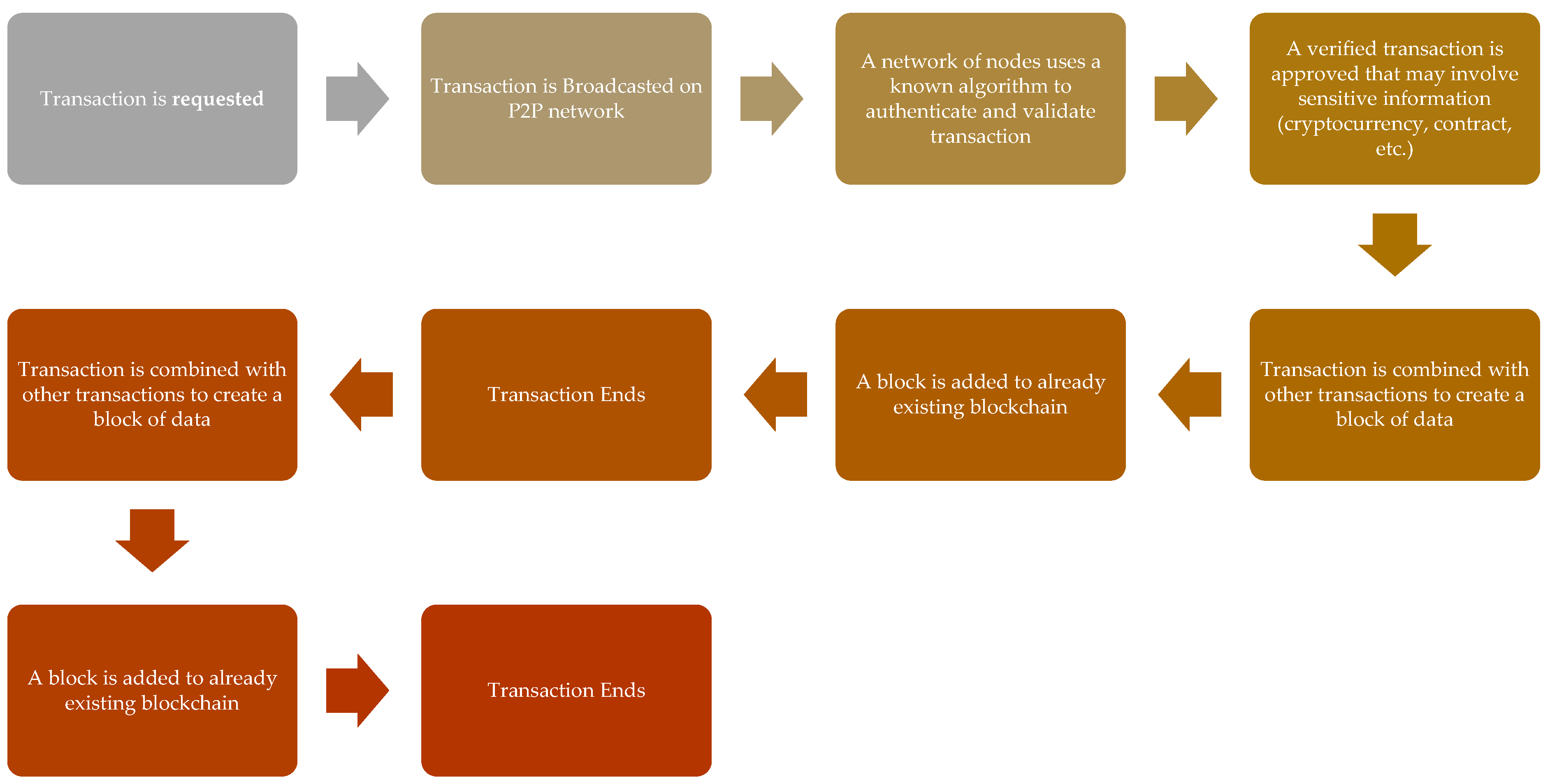 More
© Text is available under the terms and conditions of the Creative Commons Attribution (CC BY) license; additional terms may apply. By using this site, you agree to the Terms and Conditions and Privacy Policy.
Upload a video for this entry
Information
Subjects: Computer Science, Cybernetics
Contributors MDPI registered users' name will be linked to their SciProfiles pages. To register with us, please refer to https://encyclopedia.pub/register :
Adnan Shahid Khan
,
Zeeshan Ahmad
,
Jamil Asim
,
Mohammed Alqahtani
,
Mohamed Abbas
View Times: 228
Revisions: 2 times (View History)
Update Time: 13 Jun 2022
Table of Contents
1000/1000
Hot Most Recent