+1 point
Thank you for your contribution! You can also upload a video entry related to this topic through the link below: https://encyclopedia.pub/user/video_add?id=23488
Check Note
2000/2000
Rhamnus alaternus Plant

Rhamnus alaternus, is a wild-growing shrub, belonging to the Rhamnaceae family. Widely distributed in the Mediterranean basin, R. alaternus is used in the usual medicine in numerous countries, mostly Tunisia, Algeria, Morocco, Spain, France, Italy, and Croatia. A large number of disorders including dermatological complications, diabetes, hepatitis, and goiter problems can be treated by the various parts of R. alaternus (i.e., roots, bark, berries, and leaves). Several bioactive compounds were isolated from R. alaternus, including flavonoids, anthocyanins, and anthraquinones, and showed several effects such as antioxidant, antihyperlipidemic, antigenotoxic, antimutagenic, antimicrobial, and antiproliferative.

Rhamnus species are considered as medicinal plants. Indeed, these sources of natural compounds possess pharmacological activities, and are used for their curative effects to treat some symptoms and diseases [1][2][3][4][5][6][7]. During the past few years, several studies highlighted the potential efficacy of Rhamnus species in many areas [8][9][10][11]. Among these naturally available species, the Rhamnus alaternus plant (R. alaternus) is commonly recognized as a 5-meter-tall shrub, and is distributed throughout the Mediterranean area [12][13][14][15] including North Algeria, Tunisia, and Morocco [16][17]. This plant widely grows in a Mediterranean climate with hot and dry summer and winter period is moderate to cold [14][18][19].
The Rhamnus alaternus plant, the so-called "Imlilesse or Safir" in the North of Algeria, has been traditionally used for a long time in various medicine areas as infusion notably for its gastric, hypotensive, purgative, laxative, diuretic, antihypertensive, hepatoprotective, and digestive effects and finally to treat dermatological complications [20]. Such biological activities would be related to the natural presence of beneficial compounds as evidenced by many experimental studies, that pointed out that R. alaternus contains important metabolites such as flavonoids, coumarins, glycosides, tannins, anthraquinones, and polyphenolic compounds [21][22]. Some of these molecules were isolated from Rhamnus alaternus using various extraction processes (i.e., maceration, decoction, hydrodistillation, soxhlet, ultrasonic extraction) and demonstrated various pharmacological properties including antihyperlipidemic, antioxidant, antigenotoxic, antiproliferative, and antimutagenic activities. Some biological activities, especially antibacterial and antiproliferative effects were reviewed elsewhere [8][20][22][23][24].

Common in wild, Rhamnus alaternus growths generally between evergreen shrubs of the Mediterranean region, especially in a climate with discontinuous rains during winter. With such characteristics, R. alaternus is a very important species of the Mediterranean basin, where it is well acclimated to high solar radiation [25][26]. Rhamnus alaternus is widely distributed and grows naturally in a large part of the littoral and islands of the Mediterranean. In France, this plant is mainly found in the South departments such as Isère, Ardèche, Aveyron, Maine-et-Loire, in Vienne but also in Brittany [27]. In addition, this plant growths in Corsica, Algeria, and Northern Tunisia [22][28][29][30].

In North Africa, Rhamnus alaternus has several names such as Am’lile’ce, M’lila, Soitfaïr, Oud El-khir, or Safir, and is commonly known as Meliles in Berber language [31][32][33]. R. alaternus is also called Buckthorn in English, Nerprun in French, Kreülzdorn in German, Aladierna, Cosco Unia, or Sanguino de Andalucia in Spanish, and Alaterno or Legno Puzzo in Italian [34]. Concerning its botanical classification, R. alaternus belongs to the Magnoliophyta division, the Magnoliopsida class, the Rhamnales order, the Rhamnaceae family, the Reynosia Genus and the Rhamnus alaternus species [35]. In addition, this plant has various synonyms including R. a. var angustifolia DC, R. a. var balearica DC, R. a. var hispanica DC, and R. a. var vulgaris DC [36]. R. alaternus is a small shrub of about 5-meter-tall (Figure 1A–D). Its flowers are fecundated by insects or with the help of wind [37][38] and get yellow-green from January until the end of April (Figure 1E), with a top in mid-February [39]. Then puffy and black fruits are produced, and mature between late spring and early summer, each one containing between 2 and 5 red berry seeds with on average 2.5 mm width, 4.6 mm length, and 9.1 mg weight as maximum (Figure 1F) [38][40]. Seeds are surrounded within a pericarp, which opens up once dried [38], and represents an important trophic source for birds and small mammals [41]. Usually germinated in 3 to 4 weeks between 7.5 and 24 °C, the seeds remain viable for several years in storage [40]. 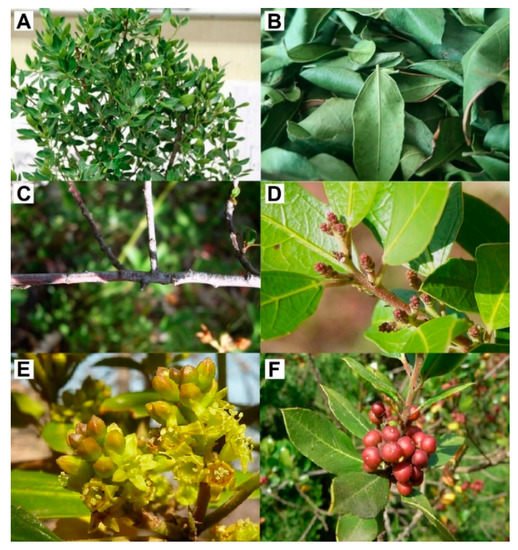 The phytochemical investigations of Rhamnus alaternus extracts led to the isolation of various classes of natural bioactive compounds, and evidenced the richness in secondary metabolites of this medicinal plant. These bioactive compounds included flavonoids, tannins, anthraquinones, anthocyanins, anthocyanidins, and other compounds [42][43], isolated from various parts of R. alaternus such as barks, leaves, roots, and berries extracts. The investigation of these compounds was limited to qualitative studies. The most important classes of phytochemicals identified in R. alaternus are summarized (Table 1) with their main chemical compounds, whose structures are presented in Supplementary Data (supplementary could be found in https://www.mdpi.com/2076-3921/10/2/300#supplementary). Each class of compounds is reviewed hereafter.
Table 1. Compounds isolated from Rhamnus alaternus.
* These numbers refer to the chemical structures plotted in Supplementary Data (Figure S2).

More
© Text is available under the terms and conditions of the Creative Commons Attribution (CC BY) license; additional terms may apply. By using this site, you agree to the Terms and Conditions and Privacy Policy.
Upload a video for this entry
Information
Subjects: Plant Sciences
Contributors MDPI registered users' name will be linked to their SciProfiles pages. To register with us, please refer to https://encyclopedia.pub/register :
Amine NEKKAA
,
Laetitia L.S. Canabady-Rochelle
,
BENAISSA Akila
View Times: 261
Revisions: 4 times (View History)
Update Date: 16 Jun 2022
Table of Contents
1000/1000
Hot Most Recent